Gracenote Coffee and Wine Bar Is Now Open in Cambridge

The roasting company's second Boston-area café has added an evening-friendly menu of artisan popcorn and booze. 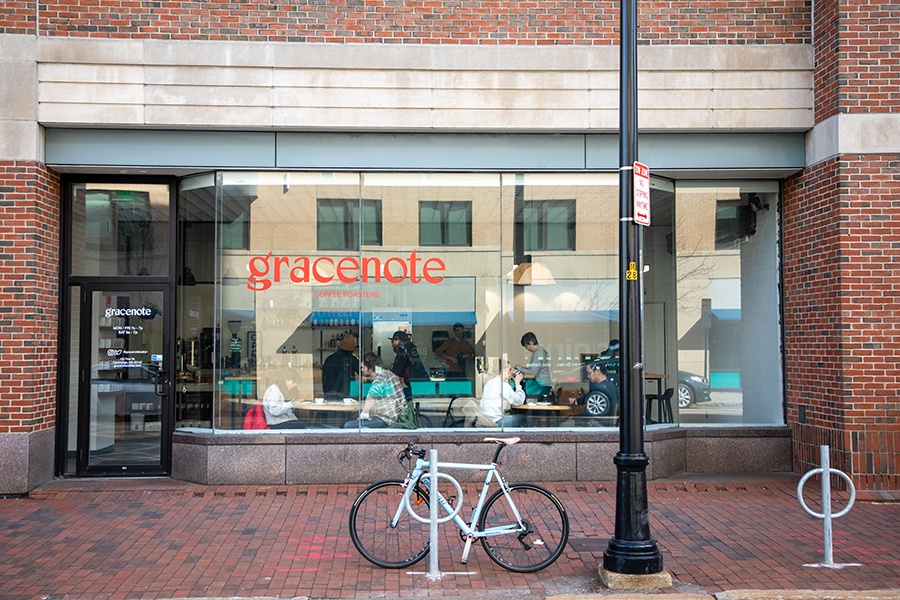 More than four years after debuting a standing room-only coffee shop in downtown Boston, Gracenote Coffee Roasters has a new location where you can actually have a seat to enjoy your espresso—and then stay a while, to follow it up with a glass of an Italian red or French white. Gracenote Coffee & Wine opened Saturday, Feb. 29, at 150 First St. in Cambridge. It’s the second café for the Massachusetts coffee-roasting company; and it’s the company’s first professional foray into the world of wine.

Gracenote Coffee & Wine serves its expressive roasts as pour-overs and in espresso drinks, and also offers cold drinks and baked goods by day. To pair with the beer, wine, and cordials license at the Cambridge café, it also offers a unique menu of Rancho Gordo popcorns, hand-cranked to order in Whirley Pop poppers.

Gracenote founder and owner Patrick Barter and the roasting company’s longtime “vibe ambassador,” Drew Korby, are working together to curate a selection of mainly natural wines, as well as select craft beer and cordials. Both men have “a well-established personal interest” in wine, says Barter, who started his coffee-roasting company in 2012 on his former front porch in Berlin, Mass. He has since done some formal wine training with the Wine & Spirit Education Trust.

Wine, like coffee, is “an arena [in which] people also talk about terroir, processing, variety, and how intentionality combines with natural variations year-to-year,” Barter says. “We’ve been doing the coffee thing for a while, and now we’re doing the wine thing.” 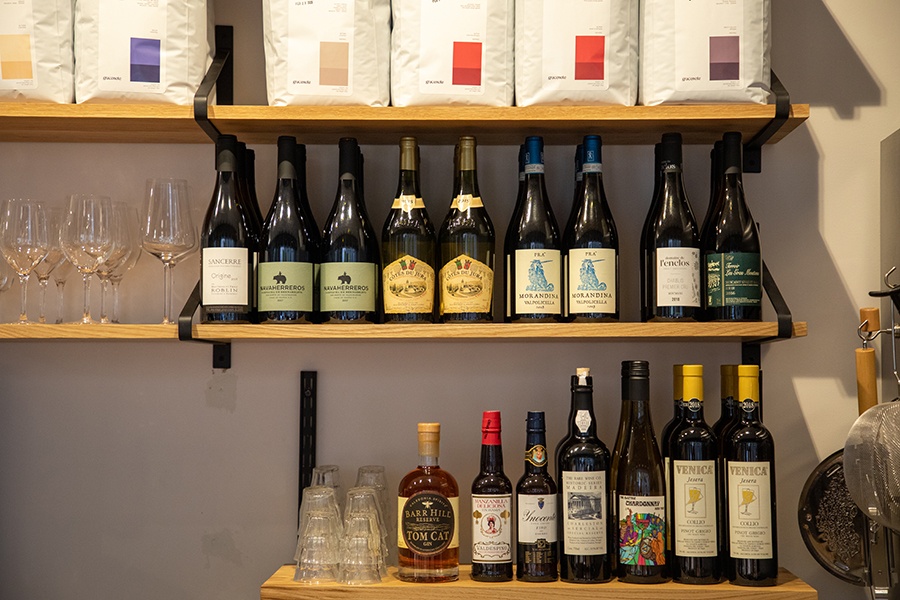 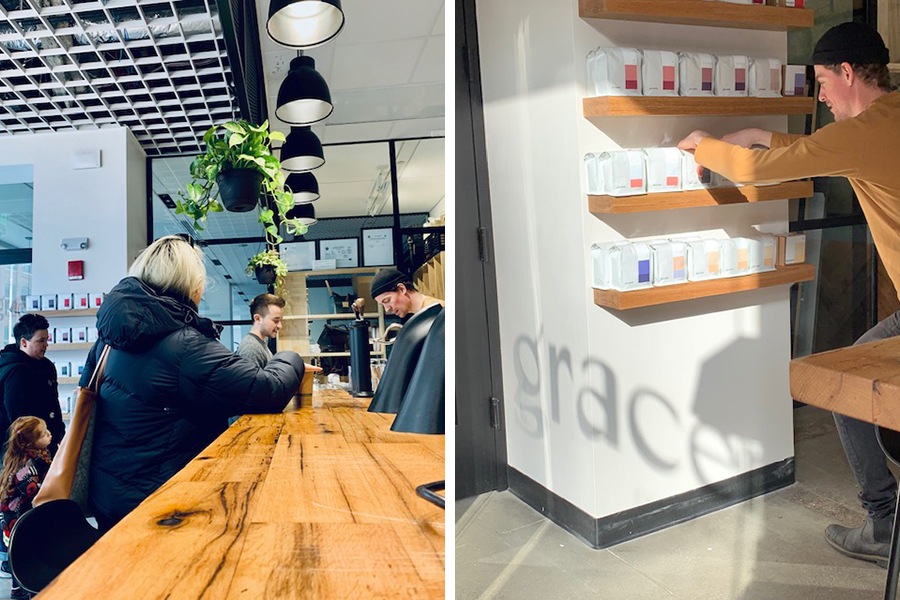 Gracenote is the latest coffeeshop to get into “the wine thing.” A few blocks away in East Cambridge, Curio Coffee pops bottles Thursday-Saturday evenings, and swaps its morning-friendly waffle menu for snacks like olive tapenade-crostini. Gray’s Hall is a full-on wine bar with shareable fare from former Tasting Counter chef Marcos Sanchez and the owners of South Boston’s beloved bottle shop and deli, American Provisions. And Salem-based coffee roaster, Jaho, serves wine and more at a few of its cafés, including in Downtown Crossing and the Back Bay.

But opening a Cambridge café and wine bar in 2020 wasn’t necessarily the plan for Best of Boston-worthy Gracenote, which is also readying a new café for the forthcoming downtown food hall, High Street Place. The opportunity to expand across the river stems from Gracenote’s relationship with the former Intrepid Café, which opened in 2017, as an extension of the technology company, Intrepid.

“We had worked with Intrepid as a wholesale partner since the café’s inception. We were involved as early as the architectural plans,” Barter says. Woodworker Ryder Naymik, who is also the operations manager of Gracenote’s Upton-based coffee-roasting company, built the original Cambridge café’s bar and tables, he adds. Intrepid “wanted to move on in terms of their focus,” Barter continues. “I offered to basically move into the space,” which was already equipped with a beer, wine, and cordials license.

The menus are poised to grow, and will frequently change, Barter says. The selection of wines will always feature “expressive” juices from across the spectrum, he says. To start, beer fans can choose between the classic German kellerbier from Grevensteiner, or the Cat’s Meow IPA from Exhibit ‘A’ Brewing Company. There is also Stormalong Cider’s hibiscus-bolstered Red Skies at Night for a cider option. Gracenote has so far stocked just one liqueur: a barrel-aged gin from Barr Hill, which Barter says makes a delicious gin and tonic—as well as an espresso tonic cocktail.

“We aren’t staring with a splash in cordial arena,” he notes, but eventually, Gracenote plans to offer more amari and other “interesting, exciting, and nuanced” spirits that comply with the cordials license.

While the new Gracenote café has a similar vibe to the Boston original, thanks to a wall of windows letting in natural light, and ample use of airy white space, dark woods, and greenery, it has some key differences. For one, it has 20 seats, including some bar-height chairs and regular tables—and it also has a restroom for customers. Eventually, Barter plans to decorate the place with photos of craftspeople at work, like his and Naymik’s mentor, Dan Weaver of Maine Kiln Works. Weaver not only crafted all of the ceramics in use at Gracenote’s cafés, but he also constructed the beautiful live-edge coffee bar at its Boston location.

Weaver’s influence is “why both [Ryder and I] do stuff in which we make things and care about how it turns out,” Barter says. “You know it when you see it: Like, ‘that thing is really good,’ or ‘this thing tastes really good.’ The ‘really good’ part is a mysterious combination of elements that are just right. At Gracenote, we focus on the ‘just right.'”

Gracenote Coffee & Wine is conveniently situated across the street from top-shelf ice cream maker Toscanini’s, and is located on the same block as dining options including Shabu & Mein and Boca Grande. It’s now open from 7 a.m.-7 p.m. Monday-Friday, and from 9 a.m.-7 p.m. on Saturdays. Eventually, it will add Sundays and evening hours until 10 p.m. Alcohol service starts at noon.