Ladies to the front—but everybody's welcome. 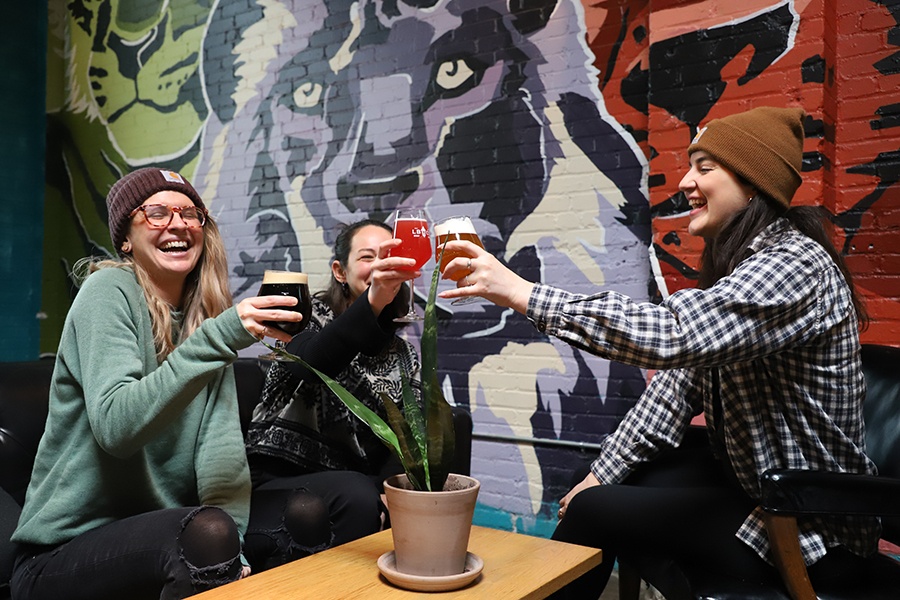 With International Women’s Day celebrated on March 8 and women’s history considered all month long, March is a month to honor women, and to have conversations about how we can continue to improve gender equitability in Boston and beyond. There are plenty of opportunities to do just that this month, from female-focused fundraisers fueled by lady-brewed beer, to the public television premiere of a documentary dishing on women chefs. Check out these Women’s History Month events around Boston in March.

The classic half-moon cookie gets a fresh look for Women’s History Month at all locations of By Chloe: The female-founded fast-casual cafeterias are serving up black, white + purple cookies, made in collaboration with fellow female-founded brand, Dana’s Bakery. Tie-dyed a (flavorless) color historically associated with women and International Women’s Day, the $3.50 cookies are vegan and gluten-free, and their sale supports Women for Women International, a nonprofit humanitarian organization that supports female survivors of war.

Lamplighter, which has a female owner in Forbes 30 Under 30 honoree Cayla Marvil, tapped the women on its staff to brew two special saisons for International Women’s Day: One is light in color and gets an infusion of lavender and lemon; while one is dark with chai spices and black current. The beers hit draft lines and coolers at the Cambridge brewery on Saturday, March 7, but on Sunday, March 8, $1 from each pour will also support female-focused workforce organizations, Matahari Women Workers’ Center and Pink Boots Society. 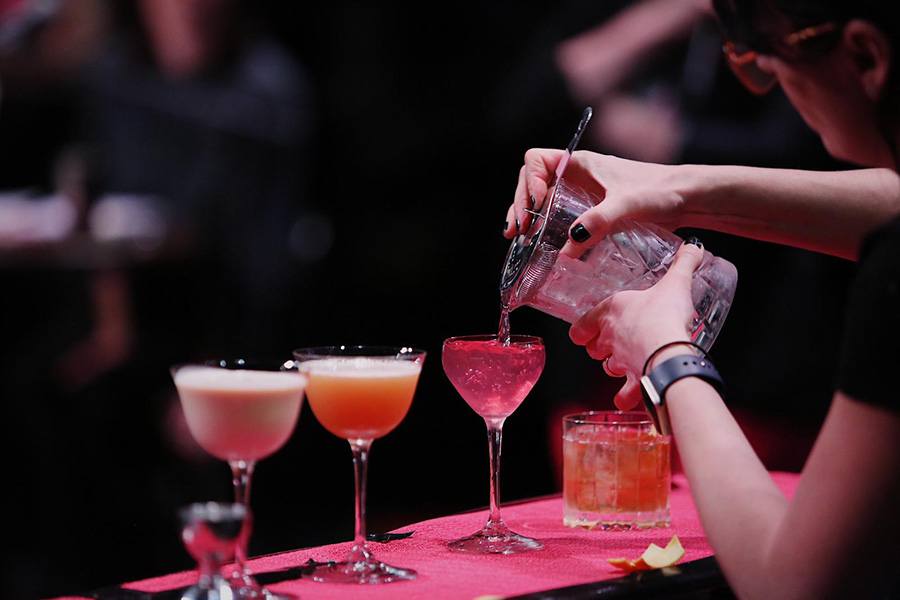 Local ladies like Alex Koblan of Blossom Bar, Grace Ghazey Rolfe of the Hawthorne and East Boston Oysters, and Hayley Wilson of the Portland Hunt & Alpine Club are testing their skills at the northeastern stop on the global Speed Rack tour. Expect to see (and taste) some mixology badassery: The timed cocktail competition was created by women bartenders to celebrate other women—and to raise money for charities supporting breast cancer research; Speed Rack has raised more than $1 million since its inception. Boston-area bartenders will go head-to-head, round-robin-style, for the chance to advance and compete for the title of Miss Speed Rack USA later this spring.

Head to Bow Market wine bar Rebel Rebel any night of the week for positive feminist energy and gorgeous wines. But throughout the month of March, the sommeliers of Rebel Rebel are bringing their vibe, knowledge, and a lineup of special by-the-glass wines across the river to Bar Mezzana. On Wednesday, March 11, Rebel Rebel founder Lauren Friel is in the house; on March 18, it’s Maia Fleming; and Grace Wexler is pouring in the South End on March 25. 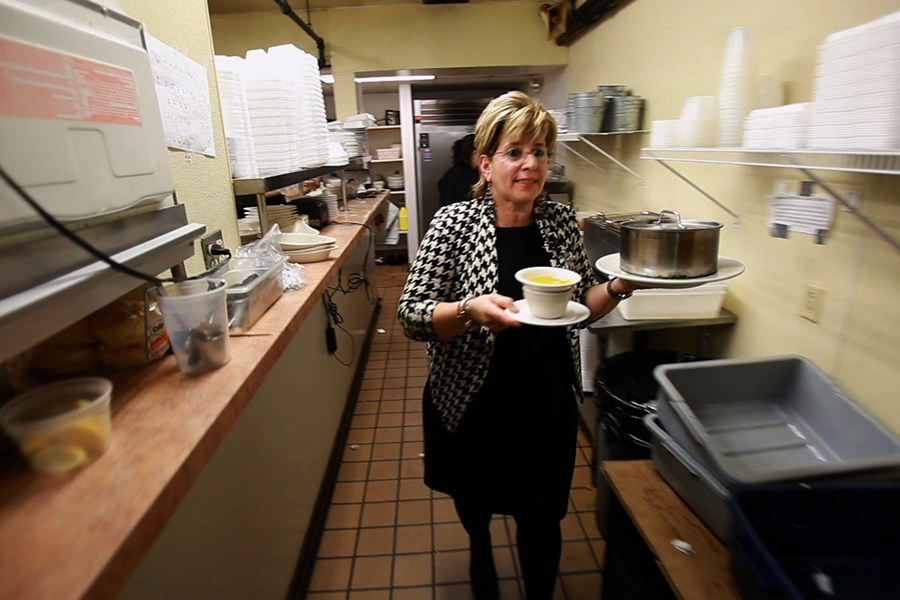 Chef Valerie James from a scene in A Fine Line. / Photo courtesy of A Fine Line

A Fine Line Premieres on PBS

Here in Boston, women have been leading our celebrated restaurants for nearly as long as we’ve been dining out, thanks to trailblazing chefs and restauranteurs like Michela Larson, Lydia Shire, and Barbara Lynch. But despite some visible and formidable successes, the hospitality industry at large remains tough for women, for myriad reasons—from sexual and workplace harassment, to unequal pay, to lack of paid family leave, and other issues. The 2019 documentary A Fine Line at once celebrates the accomplishments of world-renowned women chefs, and explores why the industry is still so dominated by men. Directed by Worcester native Joanna James, the film centers on her mother, Valerie James, who has owned and operated Val’s Restaurant in Holden. It features Lynch, among other big names like Lidia Bastianich, Cat Cora, April Bloomfield, and more. A Fine Line airs nationally this month for the first time on PBS; in the Boston area, it’s showing on WGBH Saturday, March 14, at 7 p.m.

Head to Urban Grape this month to gain more confidence in finance and wine. Podcast hosts from the 411K are coming over to share negotiation strategies, resources, and applicable skills for salary negotiations, while the wine pros in the house will lead a tasting of two Cabs. The event is a collaboration with the local fashion line Overseasoned, which sells “bold goods that flavor the resistance” like those awesome “Smash the Garlic and the Patriarchy” shirts you’ve probably seen your role models wearing on Instagram. “Cabernet and Equal Pay” is Overseasoned’s latest line—and we’re here for the sentiment. Tickets include a tote bag.

Resy’s Women Of Food dinner series returns to Boston this month, with a stop at Sarma. Now in its third year, the online reservation platform Resy launched first the series to shine a spotlight on women chefs across the country. This year, Resy asked the host chefs to dedicate their dinner to a woman who has inspired their career, and Sarma chef Cassie Piuma is taking the opportunity to thank her business partners and mentors, Ana Sortun and Maura Kilpatrick. With their compelling menus at Oleana, Sofra, and Sarma, these chefs have not only given Boston some of its most exciting dining experiences, but have also propelled modern Eastern Mediterranean cuisine in the U.S. “Having mentors that respect tradition but encourage change is liberating and pushes you to think outside the box,” Piuma says. “These are not women content hovering in the middle. The bar is set high not only for themselves and their team, but for the industry. They are respected for their talent, but also because they represent more. They are ambassadors of a cuisine that was largely a mystery to Boston before they pioneered a movement to bring awareness to something underrepresented. They’re not the loudest voices in the room, but command attention through strength, kindness, and a genuine desire to make positive change.” Reservations are available online via Resy.