Local businesses are working hard to reassure take-out and dine-in customers—before pandemic panic forces them to close their doors for good. 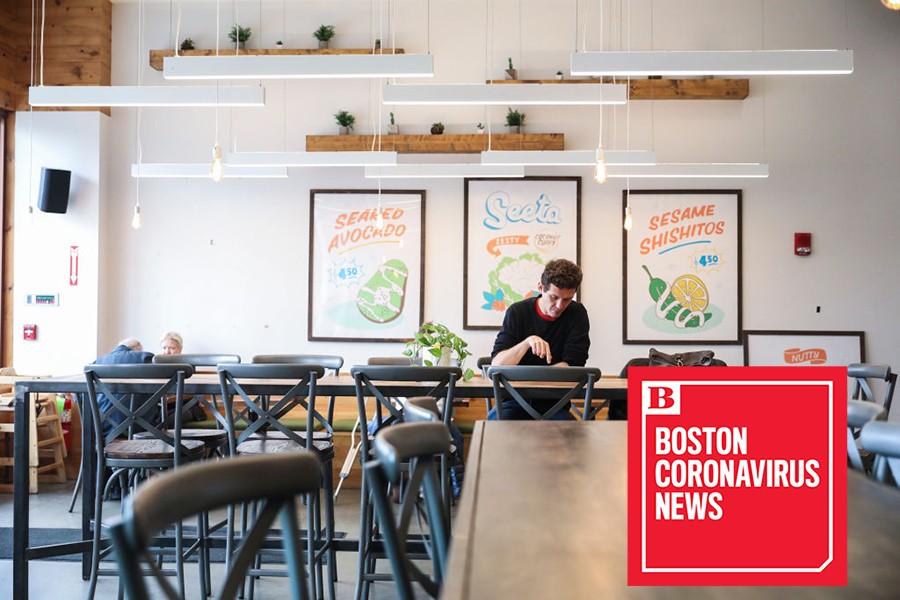 As cases of the coronavirus continue to be confirmed across the Commonwealth, Massachusetts businesses are feeling the effects of “self-isolation.” Whole Heart Provisions remains open in Central Square (pictured here on March 10), but has shuttered its Harvard Square location for the time being. / Photo by Erin Clark/The Boston Globe via Getty Images

UPDATE, Monday, March 16, 9 a.m.: It’s time to get comfy at your own kitchen table: Gov. Charlie Baker has banned on-site consumption at all Massachusetts restaurants, from Tuesday, March 17, through April 7. All restaurants can offer takeout or delivery, but that’s not a viable option for every establishment in the Bay State. We talked with local chefs about their concerns at this unprecedented time in the industry. Here are other ways you can support the hospitality industry right now.

The morning after Gov. Charlie Baker declared a state of emergency in the Commonwealth of Massachusetts, my coronavirus-induced panic really started to escalate.

But there’s also another community I fear for right now: people who work in the restaurant industry.

Restaurants employ huge numbers of people—and it’s a huge part of what makes Boston the city I love. As so many locals understandably choose to stay at home so as not to risk the spread of the virus, foot traffic has plummeted in typically high-traffic restaurant neighborhoods like the Back Bay, Kendall Square, and Chinatown.

When I consider all the suddenly empty seats in restaurants across town, I’m afraid that the coronavirus crisis could shut down some of my favorite places—and maybe some of yours, too.

In fact, it’s already happening. The Neighborhood Restaurant & Bakery in Somerville is temporarily closed as of Thursday, March 12. Whole Heart Provisions decided on Thursday to temporarily shutter its Harvard Square location until Harvard University resumes classes. Row 34 has warned its customers in Boston and the Seacoast that “adjusted” hours could be coming, and it is far from the only place that will have to consider such drastic measures.

There is not a social safety net to support neighborhood businesses in the U.S., nor a multi-million-dollar benefactor, à la Amazon, to pay the bills of workers whose livelihoods depend on our patronage. Restaurant owners are required by Massachusetts law to give employees accrued paid sick time, but there’s no law that mandates employers retain staff if business declines.

“There will be business casualties for sure,” says chef and restaurateur Chris Coombs. He acknowledges that consumers rightly want to avoid crowds right now, but at the same time, Coombs is among the many Boston-area industry vets deeply concerned about how coronavirus is wounding the local dining world—and potentially, the fabric of our communities.

From corporate account spenders to clubby cocktailers, Coombs typically caters to all types across his restaurants: Deuxave in the Back Bay, dBar in Dorchester, and two Boston Chop steakhouses in Downtown Crossing and the South End. And yet, in recent weeks, almost all his large private events have canceled. Last week, Coombs had to concoct a flash sale-style special menu to use—and importantly, sell—the ingredients he had already purchased for a full restaurant buyout that pulled out of Deuxave with just 24 hours’ notice.

Canceled events and thinning dining rooms are the reality all over the city right now. Chef Tracy Chang, whose restaurant Pagu abuts the MIT campus and a big biopharmaceutical employer and typically relies heavily on both for lunch and events business, reports at least nine large-party cancellations this past week, including a full buyout of her restaurant.

In response, many restaurants are offering deals and discounts to encourage folks to come out. Dine Out Boston, a biannual initiative of specially priced prix fixe menus for a limited time, has been extended through March 20. Chef Michael Scelfo’s Harvard Square restaurants—Alden & Harlow, Waypoint, and Longfellow Bar—are extending their employee discount to all restaurant industry workers.

Self-isolation could devastate the dining landscape. Not only does a drop in business directly affect workers, who will see their shifts cut and tips dry up, but it threatens the continued sustainability of local restaurants entirely—many of them are already struggling in a saturated market that is full of competition from inexpensive quick-service and fast-food chains.

“We are an industry of thin margins,” says Bob Luz, president and CEO of the Massachusetts Restaurant Association.

On Monday night, Mei Mei chef-owner Irene Li showed a crowd just how slim those restaurant margins can be. Although pandemic preparedness wound up a hot topic later on in the conversation, her event was unrelated to the panic now gripping the city. Rather, Li was hosting an overview of the open-book financial management system she implemented at her 35-seat, counter-service restaurant. She revealed to the crowd that Mei Mei’s net income in 2019 was not even two percent of the restaurant’s total revenue.

Bear in mind, this was Mei Mei’s fourth year earning Best of Boston accolades. It was Li’s fifth time being recognized as a James Beard Award semifinalist. In other words, it was a big year for a very small restaurant. Nevertheless, the place barely broke even—and that, says Li, is business as usual.

“Lots of small businesses are one bad month, one facilities disaster, or one city lockdown away from not being able to pay the bills,” Li says. The situation for independent restaurants is even more precarious during the current pandemic, as diners self-quarantine at home and practice social distancing. “There are lots of restaurants that don’t have investors, or venture capital funds, that are at really high risk right now.”

Chinatown restaurants, for example, are in the midst of the second month of a dire business slowdown, ever since the first Massachusetts case of coronavirus was detected in a man who had recently returned to Boston from a trip to Wuhan, China, where the novel virus was first found.

To stave off greater losses, restaurants have been doing everything they can to assure guests that they take safety extremely seriously. For more than three weeks now, Coombs says his restaurant group has directed staff to wipe down “high-touch surfaces,” like door knobs, railings, and chair rails, on the hour. “That was something we’d [typically] do as part of a daily clean, but we weren’t wiping bathroom door handles six or seven times a night,” he says. “Now we are.” 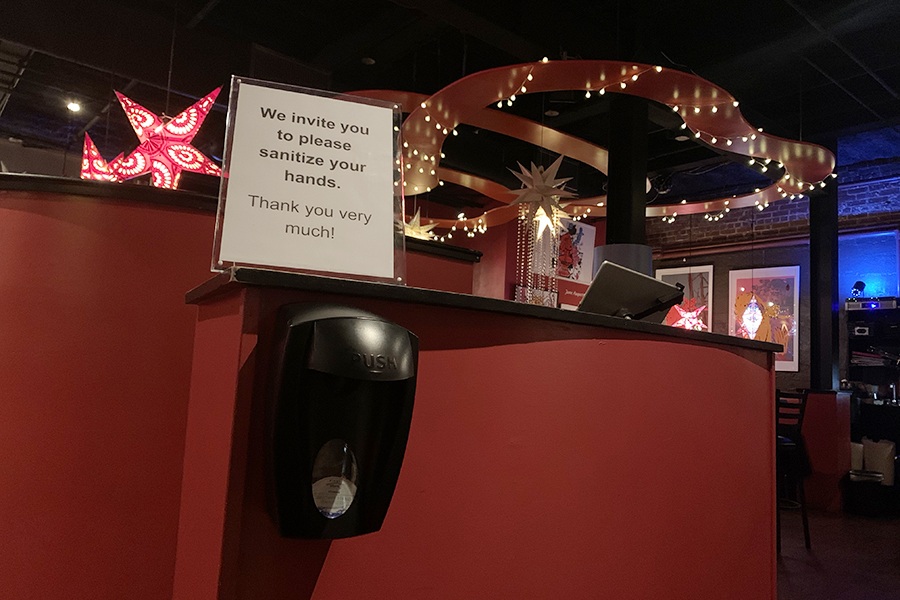 Thanks, Bella Luna—don’t mind if I do. / Photo by Jacqueline Cain

Over in Jamaica Plain, the team at neighborhood restaurant Bella Luna has undertaken a number of steps: They’ve stopped leaving salt-and-pepper shakers on the table, no longer offer crayons to kids, and even set up hand sanitizer stations at the entrances. (Sanitizer stations are popping up at open-for-business food halls like Bow Market and the Boston Public Market, too.)

Some restaurants that typically allow self-seating, like Brato Brewhouse + Kitchen and the Jack’s Abby Beer Hall, have begun mandating that staff seat customers now, in order to ensure that all tables are properly cleaned between parties. If someone’s made you a drink this week, perhaps you’ve noticed bartenders wearing gloves, as they are at the Gallows in the South End, or that individually wrapped, one-time-use straws have replaced all those environmentally friendly, trendier reusable straws for now.

Other places are mandating that servers use trays to deliver all orders, to minimize hands touching glasses and plates. Many spots are no longer pre-setting tables with glasses of water and napkin-rolls of silverware. Restaurants that haven’t had all catering orders cancelled have been individually packaging meals, rather than serving communal trays.

Expect to see even more stringent sanitary measures in practice, and to hear more about them: Restaurants want customers to feel safe.

“It’s important for restaurants like ours, that have very high standards for health and the well-being of our customers, to be very vocal about their commitments to public safety,” says Ryan Dion, the chief operations officer of 110 Grill, which has nearly 30 restaurants in the northeast, and is already known for its comprehensive allergy awareness policies.

Among other things, 110 Grill has established “social distance” in its dining rooms, by creating more separation between tables. That echoes efforts seen elsewhere: New York has just mandated that all venues seating 500 or fewer people, including restaurants and bars, must reduce their capacity by half.

During a Friday afternoon press conference, Gov. Charlie Baker banned public gatherings of more than 250 people, but the restriction doesn’t apply to restaurants, nor grocery stores, libraries, airports, and other places where people can generally maintain a safe distance from one other.

110 Grill is also one of 50-plus restaurants participating in a new campaign, #DineInorOutBoston, to offer more convenient, curbside hand-offs of takeout food from restaurants that typically specialize in seated service. According to the CDC, there is currently “no evidence to support transmission of COVID-19 associated with food.” Respiratory droplets are the actual culprit.

For that reason, crowds are the thing that people are actually trying to avoid. But does that mean people should vacate restaurants and bars? Everyone needs to responsibly assess their own individual risk level. That said, as long as someone is healthy and taking common-sense measures to keep others safe and avoid large crowds, consider ways you can safely support local restaurants and avoid eating canned beans all month.

“As things stand today, based on the information we have… I don’t see any basis for recommendations that people not dine out,” food safety expert Benjamin Chapman, a professor at North Carolina State University, told USA Today.

But others are more cautious. “Bottom line, there’s no absolute indication not to go to bars and restaurants, but in practicing good public health—which is kind of a responsibility for everybody in the country—really think about how we can decrease those close contacts,” Albert Ko, the chair of the epidemiology department at the Yale School of Public Health, told the Atlantic.

Of course, no one wants to diminish the very real threat of COVID-19. It’s now a global pandemic—a virus which has halted the NBA, NHL, MLB, and NCAA Championship seasons; postponed Boston’s St. Patrick’s Day and the Marathon, Coachella, and countless other events; grounded passenger flights to Europe; and even forced Tom Hanks and Rita Wilson into quarantine. There’s no doubt that people in high-risk categories need to be very cautious, and those who show symptoms or become exposed to the virus must take self-quarantining seriously.

Meanwhile, restaurants are taking their situation seriously too, flooding social media with messages reassuring customers and asking for support.

“I can assure you that every quality restaurant out there is sanitizing their place like a hospital to ensure your safety,” chef-owner Will Gilson wrote in a statement he shared on Puritan & Company’s social media.

“Restaurants are all about community,” Gilson went on. “We strive to be places where you feel safe, protected and well taken care of.”

Right now, the restaurant world needs to be taken care of, too.