Major Boston Restaurants Have Moved to Takeout and Delivery—But How Much Will It Help?

The coronavirus crisis has closed restaurants to in-house dining, but many hope new services will keep the lights on, staff employed, and Boston fed. 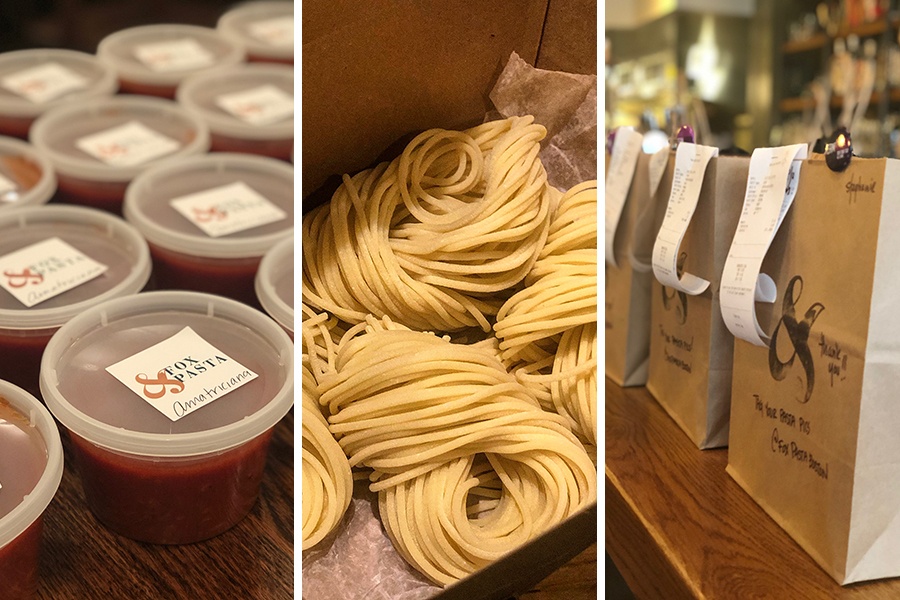 Photos courtesy of Fox & the Knife

Now that the COVID-19 crisis has led to the closure of dining rooms across Massachusetts, Boston-area restaurant and bars have officially entered uncharted territory. Chefs, though, are in the driver’s seat—literally. If you order delivery from a favorite restaurant this week, there’s a good chance the top chef herself will be the one to leave it at your door.

Only days before she’s set to compete on the new season of Top Chef All-Stars, Fox & the Knife chef-owner Karen Akunowicz has been making local deliveries from her new, suddenly necessary takeout menus, dubbed Fox At Home and Fox Pasta. Meanwhile, chef-owner Tiffani Faison (coincidentally, another alum of the hit show) is personally rolling up to people’s porches with noodles and dumplings from her Southeast Asian restaurant Tiger Mama, barbecue meats from Sweet Cheeks, and pizza lasagne from her Italian stunner Orfano. (Update: Faison’s Big Heart Hospitality Group ceased takeout and delivery options on Sunday, March 22.)

“We have a lot of viable products, and as a chef and as a human, I can’t let that just go,” says Faison. “If people are home and want some food, we’re gonna cook it and bring it to them.”

Whether they’re developing distinct to-go menus or coming up with creative delivery solutions, many restaurants that don’t typically specialize in takeout have pivoted to the format. It’s the response to an unprecedented move on Sunday, March 15 to close dining rooms at all Massachusetts restaurants for at least the next three weeks, in an effort to stop the spread of the coronavirus pandemic. However, the order from Gov. Charlie Baker also gave restaurants across the Commonwealth approval, as long as they follow the proper social-distancing protocols, to offer takeout and delivery services during their normal business hours.

Individual municipalities seem to have taken Baker’s statement as blanket permission to relax local regulations on takeout service, which may otherwise require restaurants to obtain a specific license. “At this point, we are undoubtedly experiencing a public health emergency in the City of Boston, and it is clear that we need to activate every tool at our disposal,” reads a joint statement from Mayor Marty Walsh and Licensing Board chairwoman Kathleen Joyce, confirming that regulations are lifted. “The Board recognizes the severe strain this places on our establishments and their employees and is dedicated to working with our licensees as we move forward.”

The situation is the same across the river. According to a statement from Cambridge License Commission chair Nicole Murati-Ferrer, the city’s Inspectional Services Department will “temporarily cease enforcement” of certain restrictions, “so that establishments may provide take-out or delivery services during this emergency period.”

Hopefully, expanding these options will allow restaurants to maintain at least some revenue—and continue to feed their communities. Still, the adjustment is not without challenges.

“This is not in our business model,” says Conor Dennehy, whose 28-seat white-tablecloth stunner, Talulla, has temporarily become a cafeteria dishing out family-size casseroles and soups, plus brown-bag lunches for Cambridge children. In just two days, the chef’s new menu of family-sized takeout orders, labeled “Casseroles for a Cause,” has funded the creation of 1,000 lunches for Fletcher Maynard Academy families in the Cambridge Public School system.

Casseroles for a Cause is quite different from the fine-dining service that is normally provided at Talulla by Dennehy and his wife Danielle Ayer, the restaurant’s sommelier. “Not everybody wants, like, white asparagus panna cotta with oyster and caviar [right now],” Dennehy says, describing a more typical Talulla dish. He adds, laughing a bit, “and also, that doesn’t travel well at all.” 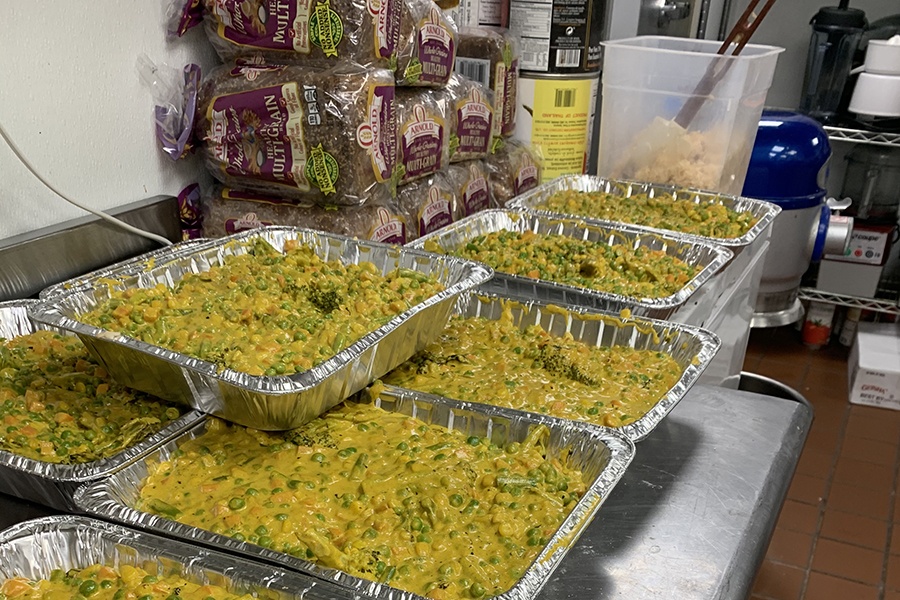 Curry vegetables are ready for delivery as part of Cambridge restaurant Talulla’s Casserole for A Cause program during the coronavirus shutdown of Massachusetts dining rooms. / Photo courtesy of Talulla

Talulla doesn’t generally offer takeout, but it keeps to-go containers in-house for the occasional nights when neighborhood regulars call ahead to bring home their favorite a la carte menu items. Just before the pandemic, the restaurant accepted a rare corporate catering order. The idea for casseroles stemmed in part from having a stack of disposable, aluminum hotel pans on hand after that order was cancelled.

“We wanted to try to use that, we wanted to try to do something that would benefit the community, and we wanted to do something that was approachable for everybody,” Dennehy says. But, he adds, “we’re just trying to get by just like everybody else right now. And luckily, we have the resources to do it in the space to do it.” Moving to this model also means that Talulla’s staff of seven will still have jobs, at least for now.

Keeping some people employed is what’s driving Faison, as well, though she did have to lay off her restaurants’ hourly staff. All gratuity received from her Big Heart Hospitality Group’s takeout and delivery orders is going into a fund to support those people.

“All of my managers are still here, but I don’t know how long it’s going to last,” Faison says, noting that the fast-changing circumstances of the pandemic could bring about the end to this new takeout frontier as quickly as it established it.

Right now, it’s all about being adaptable to a dramatic situation in flux. Faison says her restaurants may not be able to offer standard menu items—rather, it might just be “this is what we’re making today,” she says. So far, she continues to place limited orders with local vendors like Wulf’s Fish, whose businesses are also reeling from the sudden end of restaurant service in the Commonwealth and beyond.

Though offering takeout and delivery may be helpful to some establishments, the COVID-19 crisis has still forced others to simply shut down.

“Trying to keep perishable ingredients in stock is risky for us when we don’t expect a lot of revenue in terms of takeout and delivery, given that our menu isn’t typical takeout fare,” says Kari Kuelzer, owner of Harvard Square tavern Grendel’s Den. She’s among those local restaurant owners who just don’t feel the upside to takeout is worth the effort, at least not yet. If Kuelzer could keep the Grendel’s bar open to its decades of regulars—or maybe even deliver alcohol—it would be a different story. “Most places that pour alcohol, their normal revenue is from alcohol to a great degree,” she notes. But barring that revenue source, she just chose this week to distribute Grendel’s in-house food inventory among her staff, who are suddenly out of work.

Although Kuelzer locked her doors to the public on Tuesday, she remains in touch with Grendel’s regular corporate catering partners, Fooda and ezCater, to explore ways to continue serving those clients who are now largely working from home. And she hasn’t totally ruled out creating an inexpensive, takeout-exclusive menu down the line. (Update: Grendel’s Den debuts a takeout menu and delivery via Toast on Thursday, March 26.)

Other places are still figuring out whether the logistics make sense. “It is day by day for us,” says Ailish Gilligan, co-owner of Brookline beer bar and kitchen, the Publick House. For the last few days the kitchen has remained open for takeout, with head chef Joe Cooke using fresh ingredients he has in-house. As the shutdown continues, the takeout menu may change to more freezer-friendly provisions, like large trays of mac and cheese. (Update: The Publick House has stopped offering takeout as of Monday, March 23.)

“I think what’s most beneficial to the community is to offer things that would suit families at home that are confined, and need to have some sort of touch with the outside world,” she says. “People are feeling like they need some sort of connection to their old bar.”

Although no one knows exactly where the current situation is going, some chefs and restaurant owners had been bracing for a shutdown, and preparing appropriately. Karen Akunowicz, for instance, began conceptualizing her Fox At Home and Fox Pasta menus last week, even before the governor banned in-house dining.

“I am a Virgo. I always think [about the] worst-case scenario,” the chef says. So when she initially heard that New York City Gov. Andrew Cuomo mandated all restaurants and bars cut their capacity by 50 percent to limit the number of people out and about, she knew it was only a matter of time before a new reality set in here. She knew “that we were going to have to adapt… to figure out what we could best do to continue to support our team and continue to support the neighborhood.”

But Akunowicz did have to lay off most of her staff, which the two-time Top Chef competitor says is “one of the worst things I’ve ever had to do.” Her business is able to keep people insured through April, and “we are hoping, of course, to hire everybody back,” she says. It’s just unknowable when, or even if, that will be possible. “We don’t know, and I think we’re just going to see a lot of places not reopen.”

Chef-owners agree that offering takeout is nothing more than a stopgap. “This is a Band-Aid at best,” Dennehy says. “This is a temporary solution.”