Honk if you love burgers and banh mi. Here's an early look at the downtown park's new schedule, which kicks off on June 1. 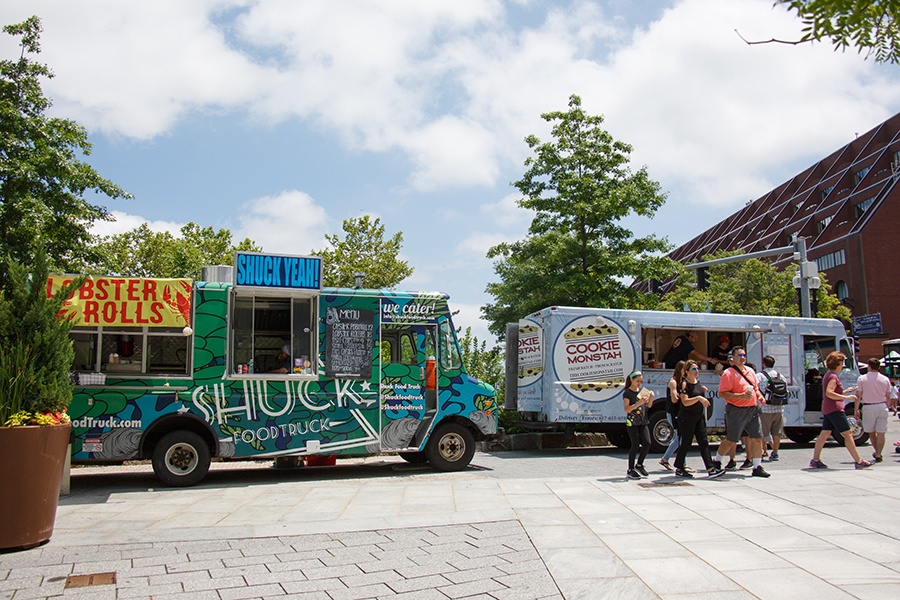 The scene won’t look exactly the same as this 2017 photo, but the Greenway Food Truck Program will soon return for a socially distanced season. / Photo courtesy of the Greenway Conservancy

When it comes to restaurants, the summer of social distancing has pushed off patio season as we know it. Traditional dining areas remain closed until at least the second week of June, though new conversations are happening right now to make it easier for restaurants to offer outdoor dining once the on-premise dining ban lifts.

But how are food trucks faring through all of this? Despite being vehicles (literally) for takeout, and though they operate in the relative safety of the outdoors, navigating the pandemic shutdown hasn’t been easy for Boston’s top food truck operators. That said, here’s a glimmer of good news: Beginning June 1, food truck season will return to the Rose Kennedy Greenway.

Check out the new, weekly schedule below. It’s subject to change, notes Rachel Lake, the marketing and community affairs manager for the non-profit Greenway Conservancy. But the Greenway Food Truck Program will return in a limited capacity, bringing favorites like Bon Me, Daddy’s Bonetown Burgers, the Chubby Chickpea, and others back to the one-and-a-half-mile park during lunchtime shifts every weekday. Schedule changes will be updated in real time on the Greenway’s social media channels. (If you’re wondering about the Greenway’s beer and wine gardens: Lake says the conservancy is awaiting further guidance from city and state officials before making decisions about those.)

Food truck operators are looking forward to a return to a somewhat normal vending schedule, but they also agree that success of the program will ultimately depend on whether customers come out. The Chubby Chickpea tried out a Friday lunch shift on the Greenway in mid-May, offering online preorders and contactless pickup from their truck parked at Dewey Square. “It was brutal,” says Chickpea owner Avi Shemtov, noting that sales were about 5 percent of a typical sunny spring Friday.

In addition, food festivals have mostly been cancelled for 2020, weekday lunch shifts aren’t what they used to be, and food-truck appearances at brewery taprooms don’t compare to yesteryear, according to Dianne Cambriello, co-owner of Daddy’s Bonetown Burgers. As a result, food truck operators are improvising: Bonetown Burgers has kept its gears in motion with a few spring appearances at its commissary kitchen in Malden, Cambriello says. The Chubby Chickpea and Shemtov’s new food truck concept, Arabé, have visited a commissary kitchen in Canton, as well as Shemtov’s Sharon restaurant, Simcha.

Mighty Squirrel Brewery in Waltham has had food trucks park on its lot this spring, to offer takeout food options alongside its curbside beer pickup, Shemtov says. The chef has even answered the call from local residents who have hired his trucks to offer contactless pickup in their neighborhoods. Food truck entrepreneurs have to think creatively, because this summer will be anything but normal, Shemtov says.

“Until companies start bringing back all their employees to their [offices], there is no food truck scene in downtown Boston,” he says. That said, his company is willing to give things a try again in June to support the Greenway. “I cannot emerge from this without the Greenway coming out strong,” Shemtov says.

Food truck owners who vend in Boston believe the Greenway will continue to be an important partner for them throughout this socially distanced season. According to Lake, the conservancy is expecting a budget shortfall due to a COVID-related decline in philanthropy, as well as a loss of income from food trucks and beer gardens that use its parkland. Despite that reality, the non-profit is working with the slimmed-down fleet of food trucks to lessen fees this year, operators say.

Vendors had signed on for the 2020 season before the pandemic set in; their season technically began on April 1. But they haven’t paid any fees yet, says Becca Brady, co-owner of the Providence-based food truck, Hometown Poké. This year’s fee structure is still being negotiated, but the conservancy has sent out surveys that have informed their decisions, and have kept communication lines open with business owners, Brady says. Meanwhile, the Greenway has also been using its platform to support its usual partners, even though they’re not on-site.

From her driver’s seat, Brady says it looks like the Greenway Conservancy really understands the challenges she’s facing. “They are doing everything they possibly can to ensure this is fair and advantageous for all of us,” she says. “They realize this is a really difficult time for small businesses, particularly food trucks who have a small window for vending.”

Communication is also key for ensuring vendor and customer safety, Lake notes. While the Greenway’s walkways, gardens, and public art have remained open to visitors, its myriad programming, from outdoor fitness to food trucks, is ramping back up in close alignment with Massachusetts’ four-phase economic reopening plan.

“We’re thinking about when things can come back safely,” Lake says. The Greenway wants to make sure that “our staff is safe but also that the visitor experience will be comfortable.”

To that end, diners should expect to see rules posted about proper social distancing, from marked places to wait in line to mask requirements. At least to start, there will be generally fewer food trucks parked at familiar Greenway spots, too—for instance, two or three will vend at Dewey Square, compared with eight different options in years past. More trucks might be added to the schedule if the launch goes well, Lake says.

Brady is comfortable with that distance: She is currently allowed to reopen the small patio at Hometown Poké’s brick-and-mortar shop in Providence, but she isn’t comfortable with that option yet. On the Greenway, customers don’t tend to sit down and stay awhile, nor do they get very close while ordering from her or her employees. There’s ample room to spread out for a socially distanced picnic, she says.

“The Greenway is probably going to be the only traditional vending we do out of the food truck this year,” Brady says. Festivals being cancelled “is a big hit to our overall revenue, but it’s also hard because it’s distinctly part of our personality as a business,” she adds. “It’ll be nice to be back on the Greenway for a little bit of normalcy.”