It's a welcome—if a bit weird—step back into business. But without more aid, many wonder if it will be enough to stay afloat through the pandemic. 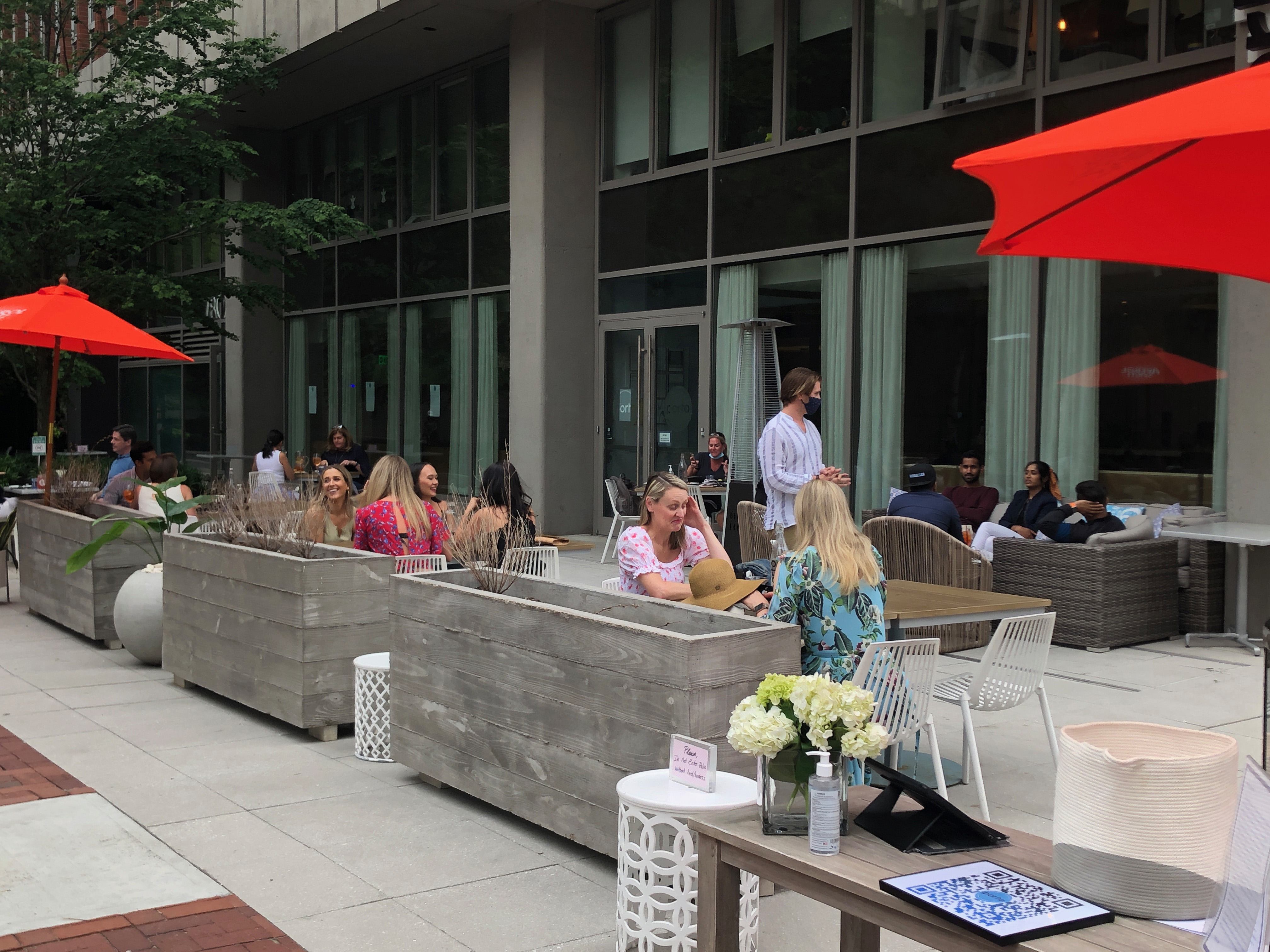 Diners returned to the patio this week at Porto, Jody Adams’ Mediterranean restaurant in the Back Bay.

Some semblance of a normal night out in Boston returned this week, as restaurants in Massachusetts began to reopen for limited, outdoor dining on Monday, June 8, after nearly three months of closed dining rooms. Restaurant owners and managers say they’re excited to get back to doing what they love, but also acknowledge that it’s been an unprecedented challenge to get to this point. Importantly, they also worry whether business from outdoor dining will be enough to help them get through the next phase of the coronavirus pandemic.

“It feels like we’re opening a restaurant again,” says Conor Dennehy, whose intimate North Cambridge restaurant, Talulla, debuts a 12-seat “summer terrace” on Thursday, June 11. Talulla’s five-person team, including co-owner and service lead Danielle Ayer, had to work quickly to take care of things like getting point-of-sale systems up and running, and making sure the patio—which is located about 100 feet away from Talulla, attached to Built coworking space—is properly insured. Dennehy has also created a new menu appropriate for the terrace, which is equipped with a grill, and will begin serving weekend lunch for the first time ever.

“We are thinking about how to use [the terrace] efficiently, make it fun, and bring in as much money as we can for as long as we can,” says Dennehy. 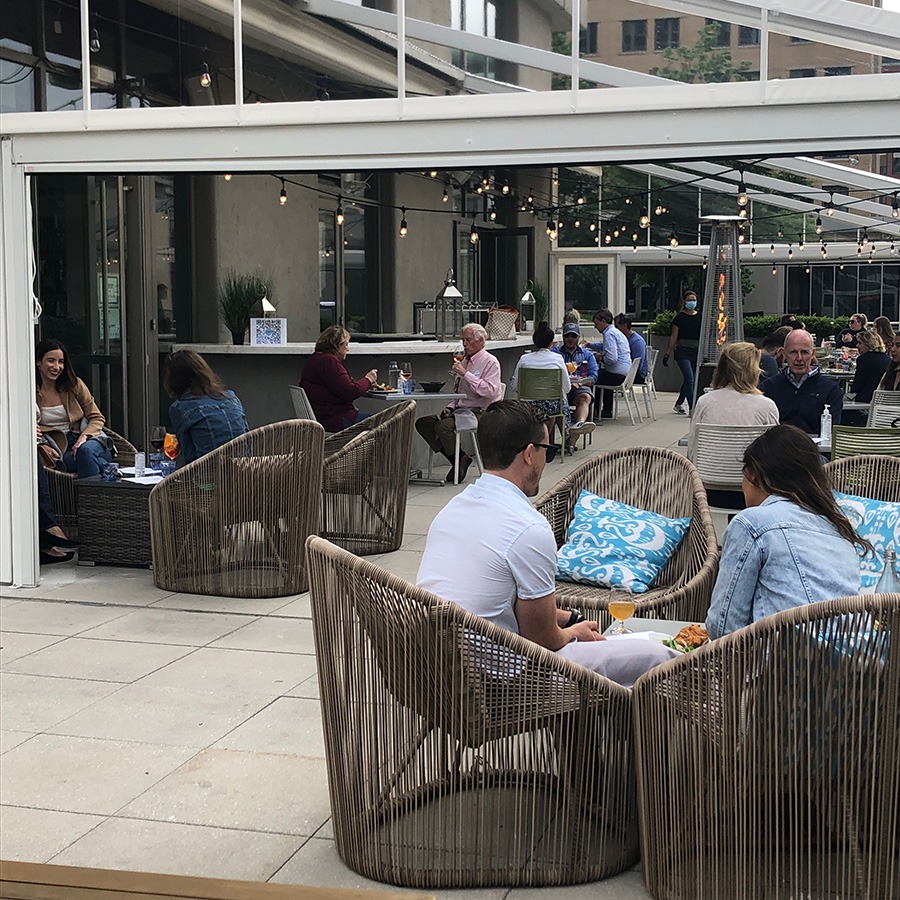 The Porto patio offers lounge seating, and thanks to an agreement with its landlord at the Avalon building, more room to spread out during the summer of social distancing. / Photo courtesy of Porto

Bringing in that revenue is absolutely crucial. And yet, without additional help from the government, reopening right now could be an exercise in futility, says James Beard Award-winning chef-owner Jody Adams. “People do not understand the economics of restaurants,” she says. “If we’re functioning at 50 percent, the numbers don’t work.”

Opening night on Tuesday at Porto, Adams’ Back Bay restaurant, was “busier than we expected,” she says. Porto boasts a beautiful, partially covered dining lounge on the ground level of the Avalon apartment building, and this year, because of the pandemic hardship, landlord Boston Properties has allocated double the square footage, giving Porto about 75 seats total.

Even still, “One night that was busy certainly doesn’t make up for three months of no revenue,” says Adams. She’s a founding member of Massachusetts Restaurants United, a coalition of independent operators who since March have been advocating for the restaurant industry at the state level. This week, the MRU praised the House passage of the Restaurant Relief Act, which expedites outdoor dining and liquor service approvals, caps third party delivery fees, and removes interest on late meals tax payments. But in that same letter to Gov. Charlie Baker and other Mass. officials, operators say the state needs to do more, including suspending payroll and meals taxes for independent restaurants; creating a rent relief tax credit for small-business landlords; and reforming business interruption insurance, which has refused to pay out claims caused by the pandemic. Adams is also advocating for Congress to pass the RESTAURANTS Act.

Rather than a money-maker, reopening for outdoor dining is a way to keep more people employed, Adams says. “Some people are on unemployment and aren’t interested in coming back to work yet, and some are working part time. Everyone has a different take. We have a lot of cooks who wanted to come back,” Adams says.

The other main driver is bringing energy back to the Back Bay, she says. “The people who were supporting [Porto’s takeout service] were the people in the neighborhood and the people in the Avalon building. They all signed up immediately for reservations.” In contrast, now is not the right time to reopen her downtown restaurant, Trade. Though it has a lovely patio overlooking the Greenway along Atlantic Avenue, “there’s nobody there,” Adams says. Until workers start to return to offices around the Financial District, “it just didn’t make sense to try and do anything out of there.”

Bringing some life back to Boston is also important to Tiffani Faison, another doyenne of the Boston dining scene. She plans to begin reopening the patios of her Fenway restaurant empire next week, starting with Sweet Cheeks, Tiger Mama, and Orfano. During a live-streamed conversation with Boston magazine food editor Scott Kearnan on Wednesday, Faison said she originally planned to hold off reopening because she doesn’t think outdoor dining will necessarily be a sustainable venture for her business. But while taking a walk through the restaurant-dense South End on Tuesday night, “I realized, people need this. Isn’t it nice to feel some humanity in a restaurant space?”

It does feel nice to be busy right now, adds chef Sarah Wade, who reopened her still-new restaurant, Stillwater, for outdoor dining in downtown Boston on Monday night. The feeling of excitement was similar to how she felt last August, when Stillwater opened for the first time, she says. “It’s like opening a new restaurant again.” 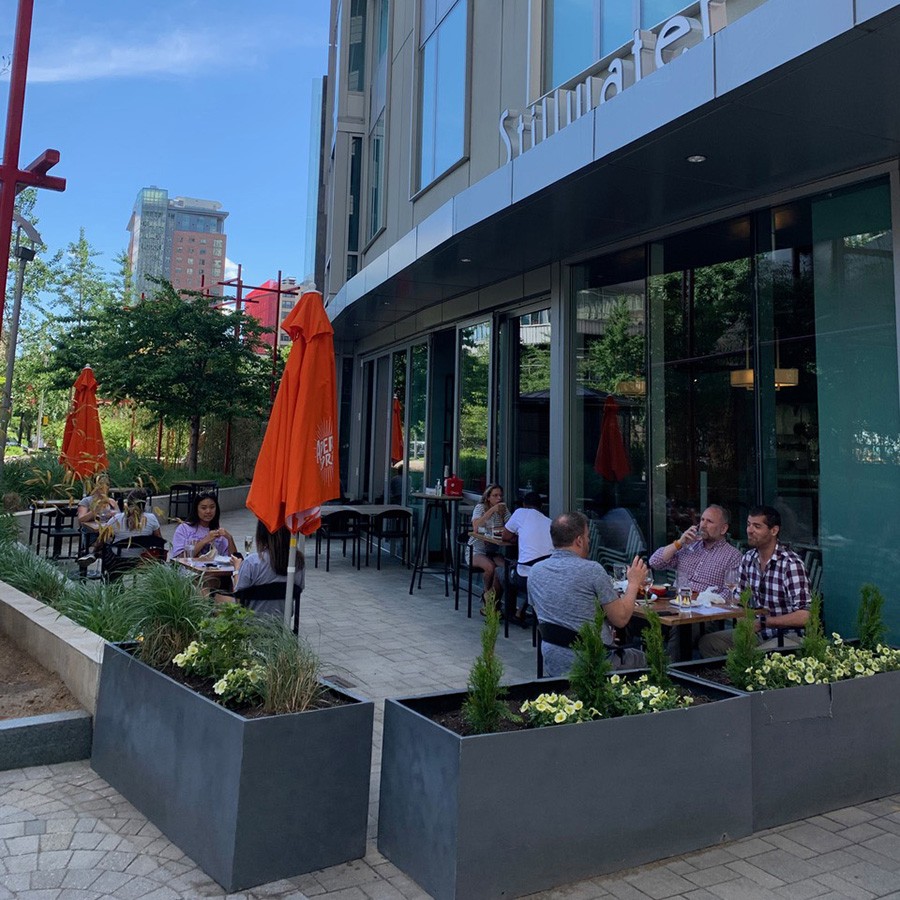 After a steady lunch service on Monday, she was preparing to flip the 25-seat patio three times during the dinner shift. To make things run smoothly, Stillwater imposed a 75-minute limit on each table, which was communicated to guests when they booked. “We want you to enjoy yourself, but eat, drink, and move on,” Wade says. “The nice thing is, everybody gets it.”

At Porto, customers have also been understanding, Adams says, but on opening night, she had to intervene when some guests asked to move their table because they didn’t like its location. Adams explained to them why the patio is set up the way it is, making an analogy to the one-way aisles most people are now used to at the grocery store.

People will continue to need reminders that COVID-19 “still is a big presence in our lives,” she says, “and we need everybody to be understanding that wearing a mask when you’re not at a table is required. Once we go inside, it’s really important that [social distancing] behavior is instilled in everybody.”

There are, of course, also new protocols in place at Stillwater to ensure safety. For example, instead of offering printed menus, Stillwater asks guests to look up the menu on their smartphones.

“It’s not the same fun chit-chat, get-to-know-you,” Wade says of the efficiency-minded new normal. “As long as we all understand and play by the rules, eventually we will get to hang out and chit chat.”

It will be similar on the Talulla Summer Terrace, Dennehy says. Typically, servers and back waiters visit a table multiple times during a meal to refill water glasses, refold napkins, and make other hospitality touches. Don’t expect such physical attention this summer. “We’re aware of the vibe, Dennehy says. “People are excited to get out, but obviously still wary. We want to make sure we’re handling it the right way. We’re willing to make the sacrifices now to help everybody get back to the new normal sooner rather than later.”