The emergency law allows for takeout of up two (sealed) drinks per entree ordered. 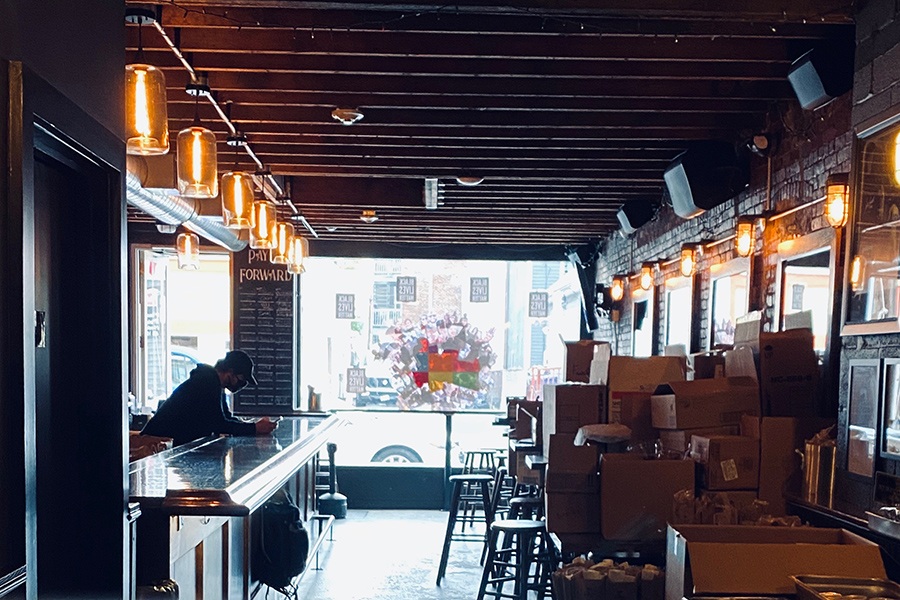 The Quiet Few owner Josh Weinstein hangs out behind his empty bar in East Boston, surrounded by cardboard boxes containing the supplies he’s invested in to sell sandwiches, cheese fries, and other bar food to go. Takeout cocktails would not only help his business rebound financially as the coronavirus pandemic continues, he says, but would also help him reconnect with his love for hospitality. / Photo by Hugo Garcia

“An Act to expand take-out/delivery options in response to COVID-19,” as bill S.2812 is officially called, landed on the governor’s desk on Friday. The bill, a version of which passed the House in early June before lingering in the Senate for weeks, did not include any additional sections that were part of earlier drafts, such as a cap on fees charged by third-party delivery apps. The new cocktail law, proposed by Methuen Sen. Diana DiZoglio, is set to expire with the governor’s state of emergency declaration. It allows for consumers to purchase two mixed drinks to-go per entree ordered, up to 64 ounces of cocktails in total. Expect to show ID for pickup and to receive delivery. Drinks will be exclusively sold in containers secured with a lid or cap designed to prevent on-the-go consumption, like mason jars or plastic tubs.

That sounds great to Josh Weinstein, owner of East Boston bar the Quiet Few. “We’re just really happy and excited that this bill has passed. Not only will this allow us to generate some much needed revenue, it’ll go a long way to make us all feel a little bit more whole—less of a takeout place, more like bartenders,” he says.

Is your local planning to offer takeout cocktails? Why not call in an order and ask them.

Josh Weinstein intended to have a small, neighborhood restaurant and whiskey bar when he opened the Quiet Few in East Boston last year—but four seats is pushing it, he says, with a resigned laugh. Yet, thanks to social distancing requirements, four is the number of seats that Weinstein currently has for serving spirits to customers. If he wants to stay in business, that’s not enough.

Although the Bay State’s phased reopening plan now allows establishments to welcome back on-site diners (with restrictions), Weinstein is one of many Boston business owners who is calling on the Massachusetts Legislature to pass “Cocktails for the Commonwealth,” the name industry proponents have attached to a section of an economic support bill that would allow licensed bars to offer alcoholic mixed drinks to go.

“This bill is the only way [we], and places like us, will survive,” Weinstein says.

Cocktails for the Commonwealth—or Section 6 of Bill No. 4774, “An Act Addressing Challenges Faced by Food and Beverage Establishments Resulting from the COVID-19 Pandemic”—passed the House unanimously on June 3. And yet, in the three weeks and counting since then, No. 4774 has languished on the docket of the Senate Ways and Means Committee.

Every day the bill goes nowhere is a missed opportunity for Weinstein and other restaurant operators to make much-needed money with takeout cocktails; bar sales supplied about 75 percent of the Quiet Few’s revenue before the pandemic, says Weinstein.

Right now, though, the bill still needs approval from the state Senate and Governor Charlie Baker. Leaders of the Senate Ways and Means Committee—chairperson Michael J. Rodrigues, vice-chairperson Cindy F. Friedman, and assistant vice-chair Jason M. Lewis—have not responded to Boston’s requests this week for a status update on No. 4774. The governor has not said publicly where he stands on the issue, but his office tells Boston he “will carefully review any legislation that reaches the Governor’s desk.”

More than 30 other states, including Vermont and New York, have enacted emergency legislation allowing restaurants to temporarily sell the hard stuff for takeout. In Massachusetts, the legislature OK’d beer and wine to-go all the way back in April. To-go cocktails were originally part of the conversations that led to that bill, says Boston Rep. Aaron Michlewitz, chairman of the House Ways and Means Committee, and the original sponsor of both the beer and wine bill and the newer cocktail-related legislation.

“We wanted to see how beer and wine would work before we did full liquor,” says Michlewitz, whose district includes the restaurant-dense neighborhoods of the North End and Chinatown. Beer and wine has definitely helped restaurants, he says, which is why his committee moved quickly on bill No. 4774. That bill also comprises other “tools critical for restaurant recovery,” including a section that would cap at 15 percent the fees that third-party delivery apps like Grubhub and UberEats can charge restaurants.

“We know the dire situation restaurants have been facing in Boston, and the Commonwealth on the whole,” Michlewitz says, acknowledging that restaurants will be struggling for at least the rest of the year. Bill No. 4774 also extends the emergency period allowing beer and wine takeout through February 2021.

Cocktails to go would be a lifesaver while on-premise capacity remains limited, says the Quiet Few’s Weinstein. He hopes to get City of Boston approval to set up more outdoor tables—but at this point, with a pandemic still afoot, he’s not ready to open up his indoor dining room.

“If we’re able to send cocktails away, it would absolutely be great for the industry,” adds Nia Grace, owner of Darryl’s Corner Bar and Kitchen in the South End. Her restaurant just reopened its small, Northampton Street-side patio over Father’s Day weekend and served its first cocktails in three months. “We do have people who want to come out, but it’s still not a great volume,” says Grace. The slim crowds mean it’s not financially viable to offer full dinner service outside—so added revenue from to-go cocktails would go a long way.

The lack of progress on bill No. 4774 is frustrating. “We’re sitting on a $60,000 liquor inventory currently that we can’t do anything with,” says Ezra Star, former general manager of Drink, chef Barbara Lynch’s trailblazing cocktail bar. (Note: Drink parted ways with Star in mid-July, she shared on Instagram.) Drink just reopened this week, but Lynch’s seven-property restaurant group has actually kept some mixologists employed for the past six weeks in order to offer non-alcoholic cocktail mixers for takeout. They’re not exactly moneymakers. Each Drink kit is $15, and will make about six cocktails at home, which is a good deal for consumers—but each bottle contains at least one ingredient (say, a non-alcoholic orange cordial) that takes her team a full day or two to produce, Star says.

“It would be a lot easier, and financially viable for us, if we could just sell bottled cocktails,” Star says. “It would save us a ton of steps, and would also allow the consumer to bring something home that’s ready-to-drink rather than having to modify and adjust it on their own.”

That’s a key to the proposed bill, too: “Ready-to-drink.” The “Cocktails for the Commonwealth” provision of bill No. 4774 would allow for licensed establishments to sell up to 64 ounces of “mixed drinks” per transaction, defined as “a sealed container that holds distilled spirits and mixers”—so, no handles of straight Tito’s Vodka or whatnot.

Besides, there are package stores for that. What restaurants can uniquely offer is the creativity that comes with making mixed drinks. “What you can’t get across the street is a Boulevardier, or a frozen margarita. That’s where our skills lie,” says Weinstein, whose restaurant is across the street from a packie. Because the pricing structure is different for package stores versus bars, the Quiet Few can’t really compete for consumers when it comes to beer and wine sales. Weinstein says it’s “charity” when customers choose to buy a four-pack of beer from him—the most he can legally sell in a transaction, per the stipulations of the emergency law.

On the other hand, a $12 takeout container of frozen negroni from the Quiet Few’s slushie machine would give his customers a good value, and align with his business model.

Where does bill No. 4774 go from here? Rep. Michlewitz, the bill’s original sponsor, would “like to see it hit the governor’s desk as quickly as possible,” he says.

“The purpose of this bill, and others we’ve been working on, is giving restaurants options for their recovery,” he says.

This story was originally published June 26 with the headline, “Takeout Cocktails Might Rescue Restaurants. So Why Won’t the Mass. Senate Move?” The headline was updated July 20 to reflect bill S.8212’s passage.