Actually, You Can Still See a Live Red Sox Game in Boston

But only if you score a prime seat at Bleacher Bar, inside a former Fenway Park batting cage. 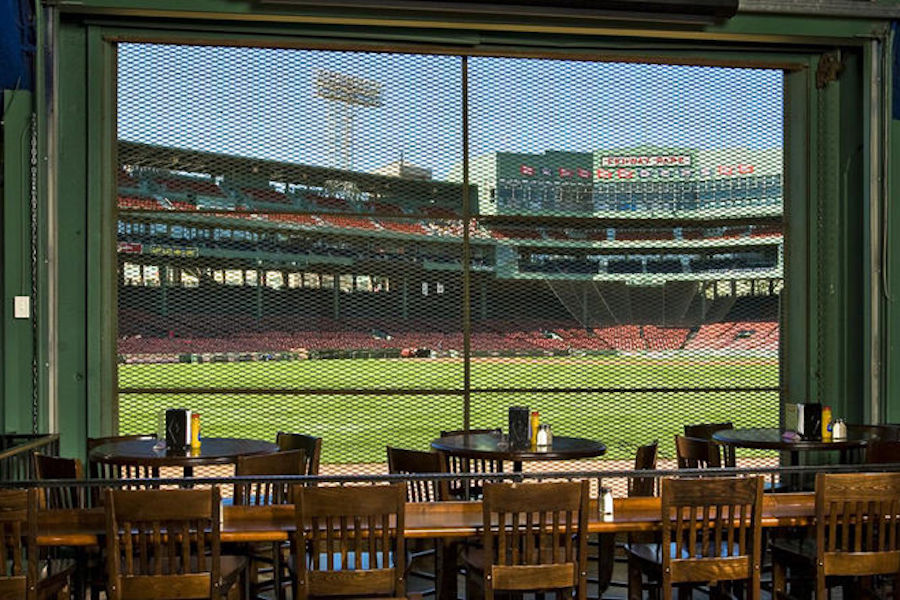 “I know it sounds dramatic, but I think you could make an argument that this is the most unique sports bar in the world,” says Ryan Jones.

That’s a bold claim, but I have to admit—his case is strong. Admittedly, as director of operations for the Lyons Group portfolio of Boston-area restaurants and clubs, Jones has a vested interest in upselling Bleacher Bar. But his team’s 2008-opened hangout is located beyond center field in Fenway Park, inhabiting a space that used to be the visiting team’s batting cage. Today, massive garage doors offer a player’s-level view right into America’s oldest Major League ballpark—which is, objectively speaking (and even if, like me, you’re more of a history buff than a sports fan) Extremely Cool.

That’s why, during a baseball season without fans in the stands, and even at a time when many diners are hesitant about doing so indoors, hitting Bleacher Bar has been a hack for the most committed members of Red Sox Nation to still see a live game. The place has been filling its reduced, 60-person capacity on game days, and in fact, they’re even selling $25 t-shirts that read “I Saw Baseball Live Inside the Park 2020.” While the typically tourist-friendly bar does sell other merchandise on its website, this swag is strictly reserved for locals who actually show up on game day.

If you want to get your own before the final spate of home games, here’s how: hop on a day-of waitlist—there’s two, one for general seating and another for the 20-or-so seats right in front of the window. Should you not score one of those, hope is not (entirely) lost. Just drink enough to give your bladder a workout: In the men’s bathroom, two windows over the urinals look over the dining room and on to the field.

To maximize your chances, Jones suggests arriving about 90 minutes ahead of time to be added to the wait-list, which can only be done in person. Bleacher Bar will either text you to return when your table’s ready or let you grab drinks and snacks on-site at Monster Bar, its new patio setup serving draft beers and Fenway-style franks underneath the iconic left field wall.

Although the tourist-friendly place is obviously seeing far fewer out-of-towners than in other years, Jones thinks the venue is still having a stronger season than other nearby spots, thanks to a rare setting that continues to draw locals even after baseball season. At a time when restaurants across Boston are desperately hurting, he knows they’re lucky to have that.

“If you’re not necessarily a dining destination, but more of a place for people to drink, you have to offer something different right now to get them to come in the door,” says Jones. “That’s something we have organically, just because of where we are.”