The social media-famous chef, known for thousand-dollar steaks, has opened a Boston restaurant. But with local eateries hanging on for dear life, it’s hard to celebrate such conspicuous consumption. 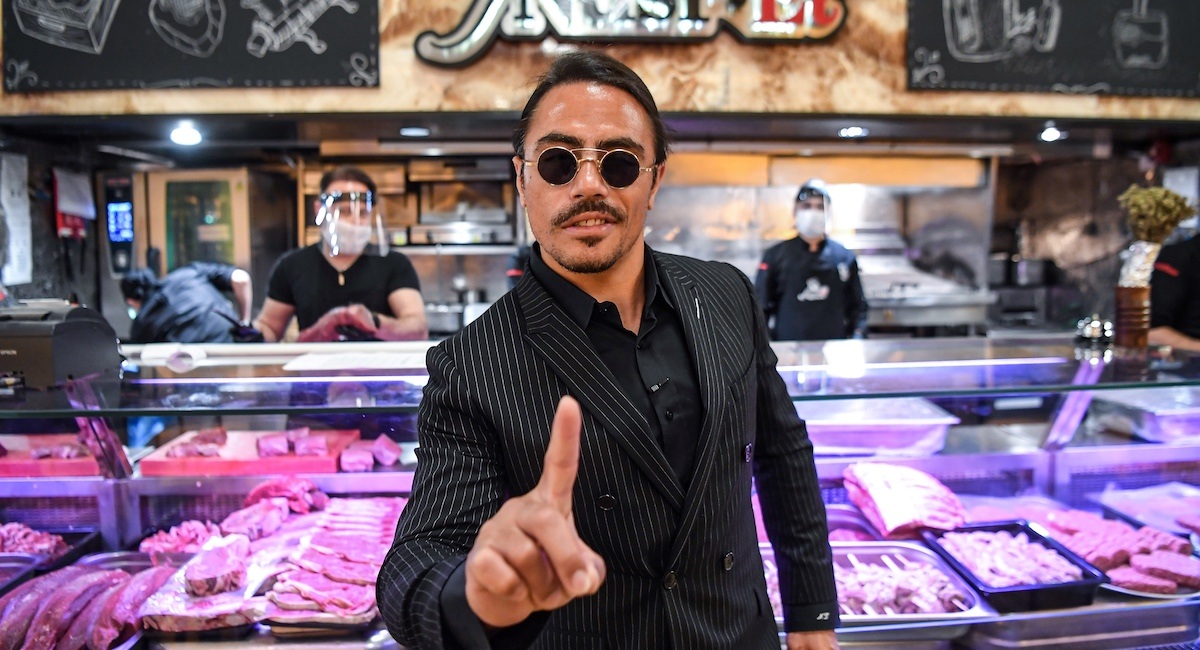 Instagram-celebrity chef Nusret Gokce, better known as “Salt Bae,” at the June reopening of his Nusr-Et restaurant in Istanbul. Photo by OZAN KOSE/AFP via Getty Images

Updated Monday, Sept. 28: Salt Bae? More like Salt bai for now. (Sorry.) The social media-famous chef’s splashy new steakhouse, Nusr-Et, has already landed in hot water with Boston’s Licensing Board and Inspectional Services Department. Nusr-Et was closed by the city on Saturday, only a week after it opened, for reportedly ignoring COVID-19 requirements. Several complaints on the city’s 311 page point to a lack of social-distancing among guests clamoring to get inside, mask-less servers, and general malarkey as Salt Bae (whose real name is Nusret Gökçe) posed for selfies with crowds of fans. There were also two blocked fire exits, according to the licensing board, which will require Gökçe to attend two virtual hearings on Tuesday. City councilor Ed Flynn, who represents Nusr-Et’s Bay Village neighborhood, expressed his anger to the Boston Globe: “It is outrageous that this restaurant continues to place the public health of thousands at risk,” Flynn told the paper. “The restaurant is more interested in making money than the public health of the people of Boston. I will ask the city Licensing Board to suspend the license indefinitely. I have zero tolerance for this reckless behavior.”

Previously: All across Boston, chefs and small restaurant owners with deep roots in the city are scrambling to afford patio space heaters, PPE, and basic wages for the few employees they can still keep on. Meanwhile, on the ground floor of a tony apartment building on the Back Bay-Bay Village borderline, an Instagram-celebrity chef is opening the latest location of his flashy global restaurant chain, one known for serving $1,000 steaks wrapped in edible gold foil.

There’s something off with this picture. And it hints at what’s wrong with many American cities—including Boston—right now.

Let me elaborate: Nusret Gökçe, better known by his heavily hashtagged nickname Salt Bae, is the social media-famous chef in question, and Nusr-Et is the glitzy steakhouse he opened at 100 Arlington Street on Friday, September 18. It’s the latest in a series of restaurants designed to appeal primarily to jet-setting crowds with real money, blindingly white veneers, and high follower counts. Once upon a time, the space was home to Liquid Art House, an ambitious but uneven restaurant cum art gallery where everything—including the $18,500 purple Murano glass chandelier over the bar—was for sale. (That place was at least uniquely Boston.) More recently, the space housed Nahita, a style-over-substance flash in the pan operated by the same Istanbul-based hospitality empire behind Gökçe’s projects in Dubai, Mykonos, Miami, NYC, and elsewhere.

Now Gökçe has arrived in Boston, and if you’re not familiar with him, here’s the CliffsNotes: Gökçe is most famous for being a meme. More specifically, he went viral on Twitter in 2017 for striking a particularly dramatic, swan-like pose while sprinkling salt on a steak, earning him the ironically reverent moniker “Salt Bae.”

A legend was born, or at least a personal brand. He now has 30 million followers on Instagram, where Salt Bae is almost always seen surrounded by opulence, flexing his way through a workout, or making particularly flamboyant cooking gestures in slow-mo. He’s usually wearing a muscle-fit t-shirt, a man-bun, and sunglasses—he wears them at night, he wears them in the kitchen, and he wears them while mugging for the camera with DJ Khaled. He also wore them in a recent post surprise-announcing the opening of his Boston restaurant, which received polarized reactions, while serving us a look best described as Zoolander auditions for Jack Sparrow.

I’m not entirely sure where Gökçe ends and Salt Bae begins, but regardless, the whole shtick comes off as a bit silly. Perhaps performance art? Who knows, but that’s not what matters. Nor, frankly, does it matter whether his food is any good (reviews of other Nusr-Et locations are mixed) or whether you find his over-the-top lifestyle charming, enviable, or obnoxious.

It matters much more, though, that—although his company denies any wrongdoings—Gökçe’s restaurants are reportedly “rife with labor problems,” according to Vice, ranging from allegations of sex discrimination to wage theft. At a time when most Massachusetts restaurant owners barely have enough money to keep from closing, one of the city’s few new openings belongs to someone with the resources to plunk down $230,000 to settle a National Labor Relations Board complaint that his managers withheld information about how much money was collected in tips. It matters that, during a period when nearly one-quarter of Massachusetts restaurants are shuttered, putting more than 200,000 Bay Staters out of work, there is somehow still a local market—or at least, someone has enough reason to believe that there is a market—for a restaurant so bougie it reportedly doesn’t serve tap water, and certainly does serve those absurdly expensive steaks. (A note: Nusr-Et’s Boston-specific menu is not yet available on the restaurant’s website, but I think you get the idea.)

It matters because our current pandemic has only highlighted the economic disparities that make cities such as Boston increasingly unlivable for many people, force folks to flee to the suburbs, and widen the opportunity gap between those who remain. It matters because Nusr-Et’s gold-foiled steaks are part of the same story that allows multinational banks and behemoth corporate retailers to post record profits during a pandemic when family businesses, including restaurants, which employ one out of 10 workers in Massachusetts, are hanging on for dear life—even as a desperately needed bailout bill for independent restaurants, those places that give cities their individual character and color, is languishing in Congress. Don’t get me wrong, I’m glad the Nusr-Et brand will bring some new jobs to town, but we’ll need more restaurant survivors than luxury chains to save an entire hospitality workforce.

These are lean and scary times, yet here comes Salt Bae, making funny faces while sipping teacups full of shaved gold. It feels like a slap in the face to anyone who loves the local chefs who are struggling just to pay for hand sanitizer. I’d tell Gökçe to read the room, but we clearly live in different houses. Zip codes, really. And if we don’t bring ourselves to address that underlying discrepancy between realities in Boston, I shudder to think what kind of town we’ll be left with—our shining city on a hill, reduced to a sprinkling of gold flakes.