For These Boston Area Restaurants, Indoor Dining Remains Off the Table

Even as Governor Charlie Baker loosens restrictions, some chefs and operators would rather turn away business than bring guests inside. 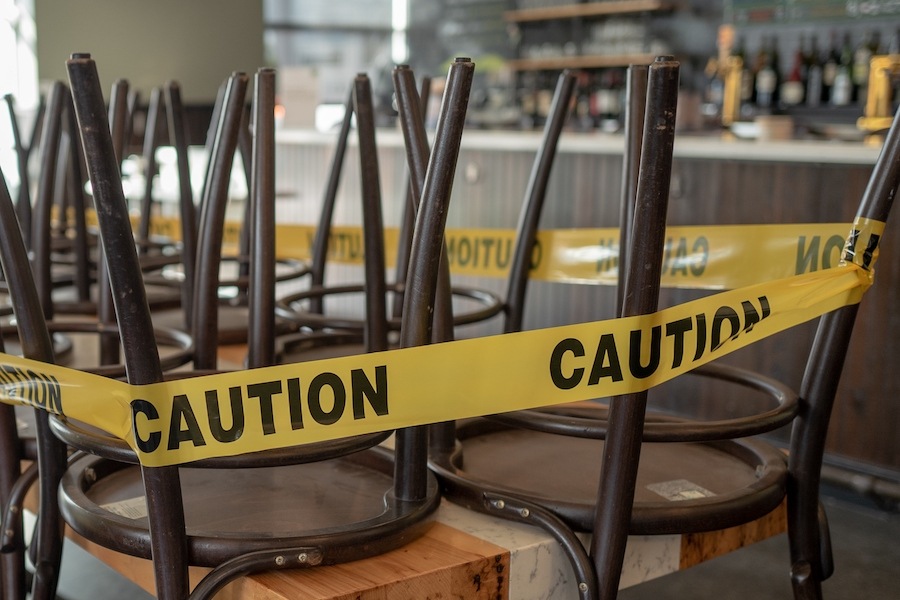 Before COVID-19 arrived, on most nights you could spot a line of people waiting in the street to slurp down noodles inside Yume Wo Katare, a snug Cambridge ramen spot. Not anymore. The restaurant hasn’t reopened for indoor dining since Governor Charlie Baker lifted that ban in June, and has no plans to anytime soon. After all, manager and head chef Jake Vo is the type of guy who sanitizes his shoes at home: How would he reconcile his stringent sanitation habits with dealing with guests? Would he find himself scolding unmasked customers to sit down? “If you yell at somebody or give somebody a hard time when they’re eating, it’s actually one of the rudest things you can do to a human being, in my opinion,” Vo says. “If I can’t invite people into my home, be a good host, and provide that hospitality, then why do it at all?”

The prospect of turning away indoor-dining customers might seem bonkers right now, considering that 20 percent of Massachusetts restaurants have already shuttered during the pandemic. And in fact, Gov. Baker even eased up on indoor-dining restrictions this week, citing low COVID-positive testing rates in allowing restaurants to increase the number of people per table and to use bar seating for food service. (Amid an uptick in Boston, Mayor Marty Walsh is maintaining the current per-table cap in Boston, although bar seating can resume.)

But some local restaurants still don’t feel comfortable opening their dining rooms at all. The health considerations are too many, say these chefs and operators, especially ahead of a predicted second surge of the virus. They feel like they’re being forced to choose between public safety and financial stability, and this will become even more difficult as the colder months move in, forcing more dining indoors.

Still, the risks of indoor dining seem too great, says Tom Fosnot, who, along with his wife Ruth-Anne Adams, is chef-owner of Real in Lincoln. He points to a study released in September by the CDC that found, “Adults with confirmed COVID-19 (case-patients) were approximately twice as likely as were control-participants to have reported dining at a restaurant in the 14 days before becoming ill.” Admittedly, the study’s not perfect: It only looked at 314 adults tested throughout 10 states, and didn’t differentiate between outdoor and indoor dining. But researchers sum up what we all really know already: “Masks cannot be effectively worn while eating and drinking.” In other words, if there are virus-laden respiratory droplets floating inside a restaurant, you won’t be shielded while you’re forking fusilli into your mouth.

The couple simply can’t bring themselves to bring guests inside—not anytime soon, at least. Real is the kind of cozy spot where, once upon a time, you might end up chatting with a neighboring table over Scandinavian-inspired smørrebrød plates. Now the dining room is empty, and its 20-person staff was laid off at the start of quarantine. Real has pivoted to providing takeout orders, as well as outdoor seating at socially distant tables and picnic blankets on the grass.

Coronavirus concerns have also led Yahya Noor to suspend indoor seating at Tawakal Halal Café, the 600 square-foot Somali eatery he runs with his mother and sister in Eastie. Right now it’s takeout only, although guests can order inside and staff will bring their food to a small outdoor parklet. “We just didn’t want to take a risk and open the doors inside,” Noor says. “We can make an extra few hundred dollars, but what is that worth if we catch a disease, you know?”

He’s not the only one willing to miss out on a big chunk of change. Just look at Josh Lewin, culinary director and co-owner with Katrina Jazayeri of Bread & Salt Hospitality. Peregrine, their restaurant in the Whitney Hotel in Beacon Hill, currently offers indoor dining only to hotel guests, while sister spot Juliet in Somerville is sticking strictly to takeout and patio dining. “We could get to profitability faster by just inviting everybody inside, for sure,” Lewin says. “But we’re concerned that actually has longer term consequences for the public and for ourselves.”

You might think that business owners like Lewin feel empowered by choosing themselves whether to reopen their dining rooms—but you’d be wrong. It feels like a “pass-the-buck situation,” Lewin says. “We’re just trying to go slow. The [federal and state] governments—with all of their research time, staff, and awareness of things that we’re not aware of—don’t seem to be making clear decisions. They’re kind of leaving those decisions up to us.” Restaurant owners don’t exactly have the resources to independently study the safety of indoor dining; they have to rely on government-provided research. The problem, though, says Lewin, is a “lack of clarity or information that says this is a slam-dunk good idea right now.”

For all the frustration aimed at the government, though, no one seems to be blaming spots that choose to open their dining rooms. “Everybody has to find a different path,” Adams says. “There’s no right answer for any restaurant at this point.”

“I would adamantly support anybody’s decision to do what they had to do with the best information that they had,” Lewin adds. “I really consider this failure of response to be at the government relief level and not at the level of any individual business.”

Here’s the million dollar question, though: As the weather cools, will restaurants that currently eschew indoor dining stick to their guns? Noor, for one, is hoping to find enough space heaters to make Tawakal’s new parklet palatable into the winter. Vo likely won’t bring permanent indoor dining back to Yume Wo Katare until there’s a vaccine, he says, though he’s thinking of launching indoor lunch service, which would be made available to individual diners in half-hour timeslots; Vo would sanitize between seatings. Over at Bread & Salt, meanwhile, Lewin’s team is planning to amp up delivery and focus on their popular virtual dining experiences—especially during the holiday season. They certainly can’t count on holiday parties to get them through the leaner months.

Like many of us, Real restaurant’s Adams and Fosnot miss the sense of community and normalcy that comes from gathering over food. The thought of being at the center of an outbreak in their close-knit town is a nightmare, they say, but they hope they’ll soon be able to reopen their dining room and share with their community the warmth of a familiar space.

They’ll do that “when it feels right, and it still doesn’t feel that way,” Fosnot says. “It feels like this is still a fire that’s burning a bit out of control. We don’t really want to set up a table next to it.”