Restaurants Across Boston Are “Hibernating.” Will They Actually Return in the Spring?

Temporary closings are a last-ditch effort to save money during a bleak pandemic winter. Will it help our favorite places preserve their strength—or threaten their chances for long term survival? 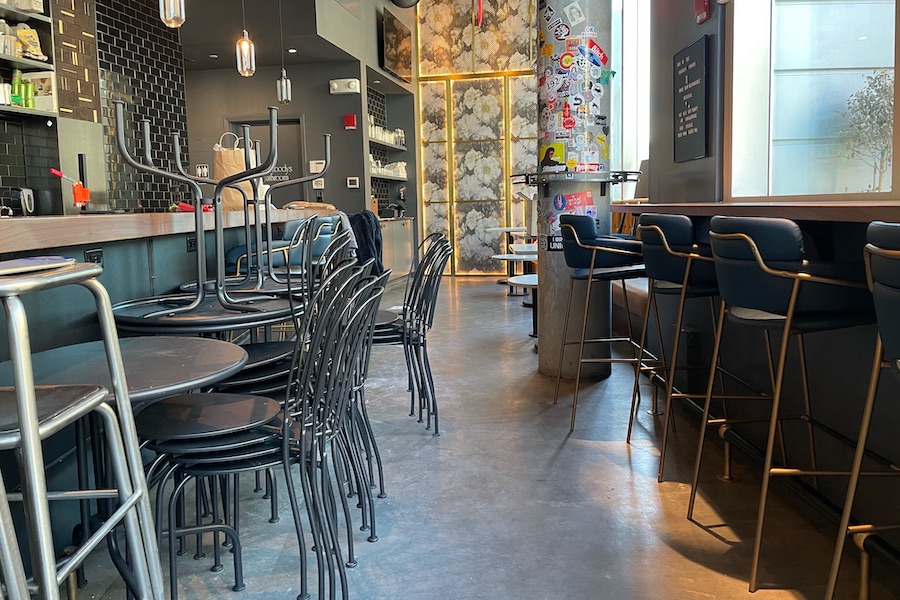 Nathalie, a wine bar in the Fenway, has joined the long list of restaurants “hibernating” this winter to save cash for spring. / Photo courtesy of Nathalie

I was scrolling through my Instagram feed on a particularly dismal day in December when suddenly, my heart sank. Staring back at me from my phone was a kitschy Elvis Presley lamp I recognized instantly—and not just because the King’s lip curl and bedroom eyes are easily identifiable, even in enamel. In pre-pandemic times, I’d spent countless nights sidled up close to that very lamp at Delux Café in the South End, trying to use its muted light to read the menu at a dim, crowded, cozy neighborhood bar that has always been one of my favorites.

This time, though, Elvis was propped up in front of a window next to a healthy-looking houseplant, a sure sign the lamp had left the building: Delux Cafe isn’t a place that gets much natural light, after all. As it turned out, the bar’s owners had taken this prized piece home, where they’d be spending a lot more time. “Sadly this guy ain’t the only one out of work for the season,” read the photo’s caption.

It was an announcement I had been dreading, similar to messages I was seeing every day from my favorite restaurants throughout the city, and from dining operations of all sizes and styles. Delux Cafe was shutting down for the winter, one of the estimated 1,000 restaurants statewide that have opted to “hibernate”—a euphemism for “temporarily close”—while the COVID-19 pandemic continues to rage and snowy weather makes outdoor dining untenable, according to Bob Luz, president and CEO of the Massachusetts Restaurant Association.

Now spring is within sight and vaccinations are rolling out, but I still find myself worrying about what the future holds for all my favorite places. (I will love you forever, Eastern Standard!) After all, despite long-awaited movement in February on federal financial support for restaurants, sufficient aid is still lacking. Many months into this long, cold, lonely winter, are things looking up for hibernating restaurant owners—or is their outlook even more bleak? If your favorite restaurant has entered into hibernation, what are the odds of it coming back?

The answer, as ever with restaurants during COVID, is measured: Beleaguered operators are hopeful but still scared. On social media, many work overtime to assure their guests that winter hibernation will be enough to keep things afloat until patio seating is back in action. In reality, though, they are spending their shuttered weeks crunching numbers, reviewing business plans, and observing an industry landscape that’s constantly shifting. When it comes to long-term survival, then, restaurant owners still have many more questions than answers. So do those of us who love what they do.

Of course, before we can predict the future, it’s important to understand why these places chose to shut down in the first place. “Basically, it’s cheaper to be closed,” says Laura Hafner, who owns Delux Cafe with her husband, chef Kyle Yanney. By hibernating, or at least dramatically reducing daily operations, the idea is to cut expenses and hunker down not only until the airborne threat is diminished, but also while state-restricted dining-room capacities are too small to turn a profit.

This is hardly a silver-bullet solution, though. “The bills aren’t disappearing,” says Haley Fortier, who owns two now-hibernating Boston wine bars, Haley.Henry in Downtown Crossing and Nathalie in the Fenway  “They’re just sitting there waiting for [us] to come back.” That said, at least a temporary closing allows Fortier to calculate exactly how much money she’ll lose each month on rent and other fixed expenses. She doesn’t have to think about many of the variable costs that come with being open, like buying food that might go uneaten, or staffing a dining room for guests who don’t show up.

Two months after shutting down, there are a lot of predictions Fortier still can’t make. She is confident her businesses will eventually bounce back, but she’ll also candidly admit that she’s not sure how. For one thing, Downtown Crossing is “a shell of what it used to be,” she says. Pre-pandemic, the district’s office workers would pack Haley.Henry by late-afternoon. But given the now-vacant nearby offices and the likelihood that a lot of telecommuting will continue post-pandemic, she’s uncertain when, or if, the neighborhood buzz—and business—will return “full swing.”

“It’s so hard to constantly be the cheerleaders to something that seems like it’s never winning,” Fortier says.

Her concerns and frustrations are understandable, considering the experiences of other restaurants that have already tried to tiptoe out of hibernation. Take the Financial District’s family-owned Villa Mexico Café, which returned in January after a six-week slumber prompted by personal obligations. Though the temporary closing did dramatically slash operating expenses, founder Julie King was determined to reopen on the cafe’s anniversary, January 11, to keep her promise to their employees, she says. But foot traffic has not returned, and neither has catering for offices and events, which represented roughly 80 percent of sales pre-pandemic.

“I am worried about my employees,” Julie King says. “I don’t like to cut their hours. I don’t like to say, ‘My dear, you have to go home because there is no business.’ I never do that.” So, she keeps hustling to ensure they have work to do.

All of this means Julie and her daughter/co-operator, Bessie King, are confronting the very real possibility that their stopgap measure of selling and shipping jarred salsa and packaged tamales might be a much bigger part of their business’s future. “Sure, we still have the brick-and-mortar,” Bessie King says. But she knows that “if catering and events don’t come back to the magnitude that we had before,” those packaged-food sales will be crucial to making up the difference that walk-in customers and occasional takeout can’t provide.

In nearby Chinatown, meanwhile, restaurateur Brian Moy has kept his Ruckus noodle shop closed since last March’s state-mandated shutdown. He did reopen sibling spot Shojo in August with takeout and outdoor dining, followed by indoor service in December. Ultimately, though, he made the call to shut down again after several discouraging days of sales. He says he’ll try reopening again once better weather and widespread vaccinations bring more people out.

That said, “I’m a little more jaded now,” Moy says. “You don’t want to set yourself up for disappointment.”

Of course, the prospect of reopening depends on individual factors for each and every operation—and luckily, even some of the hardest hit chef-owners are still bullish about their prospects. “I’ve been sipping on a glass half-full for a long time,” says Moy, who still hopes to begin construction imminently on a previously announced Hingham restaurant. And look at Jose Duarte, who forever closed his 20-year-old restaurant, Taranta in August 2020. Although that restaurant was done in by the pandemic-throttled economy and an impasse with a North End landlord, he is confident that his hibernating Chelsea restaurant, Tambo 22, will not only return with patio season, but thrive. He credits his future success in large part to Tambo 22’s location, not only in a residential city with a relative lack of dining-out options, but also in a building that he owns.

He’s damn determined, too. “We will be back,” says Duarte. “We have to come back. This is what we do. This is what I do,” Duarte says. “Hope is the last thing we lose.”

Inspiring words, to be sure, but unfortunately, a great pause isn’t enough to ensure a grand return. Back at my beloved Delux Café, Hafner still has lots of big bills to pay while doors are closed. For instance, she’s still making rent payments on Delux’s triple-net lease, an agreement that includes expenses typically handled by a landlord—things like real estate taxes, building insurance, and maintenance. She is eyeing March for the return of Delux, but even that is contingent on getting city approval for another temporary patio, loosening restrictions on public gatherings, and other factors.

Before the pandemic, “Our business was pretty consistent; we knew every month what would come in and out,” Hafner says. Now, “it’s a whole different thing. You want to be hopeful, but you have to be realistic.”

From the middle of this worst-case-scenario winter, “hopeful but realistic” is as close as we can get to predicting the future of our favorite restaurants.