What’s the Difference between a “Dixie Cup” and a “Hoodsie Cup?”

They might be the same childrens' ice cream treat, but Van Halen never sang a song about Hoodsies. 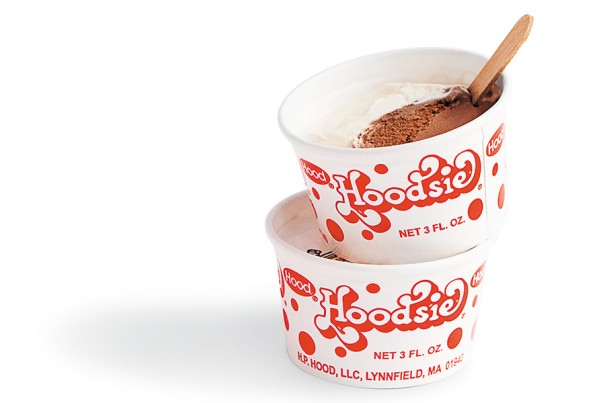 I grew up in the mid-Atlantic, and the dessert we always clamored for as kids was the “Dixie Cup.” Now that I live here, all people talk about is the “Hoodsie Cup.” Are these the same thing? And if not, what are the differences? —P.L., Brighton

Crikey, P.L., your nostalgic befuddlement is quite contagious! For one thing, just the mere mention of a Hoodsie Cup hurled me back decades to the birthday parties and swim-team barbecues of my childhood. I can dreamily recall those days when I’d eagerly receive that chilled waxed container with the lid that I’d pull back to reveal the sweet, creamy goodness, made even better by the flat wooden spoon that gave off an odd, grassy umami. And yet when I think of Dixie Cups, I think of something different from you: those disposable drinking vessels daubed with fun, groovy designs that were ultimately frustrating because parents used the small ones to skimp on the fruit punch.

Oddly enough, that Dixie beverage cup has roots here: It was the brainchild of Lawrence Luellen, a Boston inventor. In the early 1900s, schoolchildren regularly shared cups in the classroom, thereby sharing things like flu and diphtheria, so in 1907 Luellen created a solution: the disposable paper cup. Eventually he and his brother-in-law Hugh Moore set up shop in New York, where they named the company after their neighbor, the Dixie Doll Company, then moved one more time to your beloved mid-Atlantic: the Lehigh Valley of Pennsylvania. By 1923 they were partnering with dairy companies to package “dainty cups packed with sanitary ice cream” that any store could sell. Nowadays, Dixie is just the famous cup-and-plate brand owned by the Georgia-Pacific paper company, but the concept of the ice cream Dixie Cup nonetheless spread far and wide, inspiring everything from Peters Dixie Cups, made in Australia, to our iconic Hoodsies in Luellen’s hometown of Boston, which were introduced in 1947 by the HP Hood dairy company.

Learning this history also cleared up for me why Van Halen’s classic rocker “Ice Cream Man” features a shout-out to Dixie Cups, something that confused me for years. (Of course, if you know the song, David Lee Roth is not really singing about ice cream either.) I mention this tune because that’s probably the main difference between the two desserts: Van Halen never sang a song about Hoodsies. Otherwise, as far as I have found, they are the same type of treat that is now enjoyed by my own kids, and by me, too.