Dynamite drinks and Thai food are the ball game at Mahaniyom, where the sharply focused kitchen dares to not do everything. 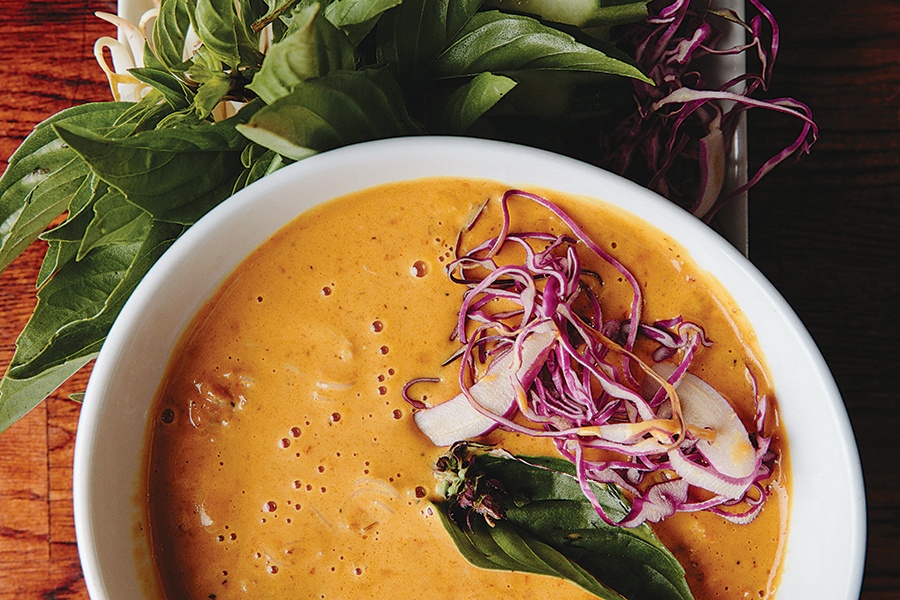 The fattiest cut of a pig isn’t actually the belly. It’s the jowl. In Italy they cure it into guanciale, dispensing it like over-the-top bacon bits a few sparing tablespoons at a time in primi-sized portions of carbonara.

In Brookline Village, by contrast—at the exceptionally good Thai small-plate-and-cocktail bar Mahaniyom—they take a hunk of jowl the size of your fist, cure it overnight in a concentrated brine of soy sauce, garlic, cilantro, honey, and white pepper, then grill the whole damned thing to order like a preposterously well-marbled pork chop. Sliced and fanned out on the plate in a cascade of char-crusted dominoes, tilted come-hitherishly to tease the interior’s shiny-white gleam of breakfast-sausage-level translucence, Mahaniyom’s kor moo yang ($13) is meaty and juicy and, as you have probably gathered, rich as all get-out. It does not need salt.

What it could use: some kind of chaser. Not to worry. The kitchen’s got you covered. First, cilantro sprigs, stems thick as cocktail straws, for soap-clean contrast, followed by a bracing balm of nam jim jaew, cherry-tart tamarind and lime juice, seasoned with fish sauce and thickened with nutty toasted rice powder and pestle-clobbered dried chilies. Finally, oblong disks of ice-bath-crisped cucumber to reset the palate every few hot, bacony bites. With three deft flicks of the magic wand, a potential gut-buster is transformed into an improbably elegant passage of porcine poetry. It’s fantastic.

A robust embrace of dining’s pleasure principles, coupled with precision-tuned execution. That’s a winning combo for any restaurant, but for a Thai joint in this town, where even Best of Boston winners tend to prioritize encyclopedic breadth over curatorial focus, it’s downright exhilarating. S&I, for instance, offers plenty of gems—but they’re scattered about a menu of more than 200 items once you include every permutation of pork, tofu, and seafood medley you can swap in, plus crab rangoons and wonton soup. (Thai North’s grand total: 400-plus!) Mahaniyom, meanwhile, patently rejects the notion of serving as a compendium of every dish in the history of the cuisine, much less a hazy-borders hit parade of pan-Asian crowd pleasers. There are just 31 items on the dinner menu, including the sides of jasmine rice ($3), sticky rice ($3), and vermicelli ($2).

Indeed, intentionality rules the day here—starting with the specificity of the concept. Co-owners Smuch Saikamthorn and Chompon Boonnak, childhood friends who grew up in Thailand’s Phetchabun province, chose to model the place after what Boonnak calls ran lao, unassuming Thai bars for grabbing a drink and simple, satisfying street food. At Mahaniyom, the catalog is not complete. They have what they have. There’s no larb, no pad see ew, no tom yum kai soup, not even a green curry. The sumptuous panang curry ($14) comes with beef. You cannot get it with chicken or tofu. And lo and behold, a funny thing happens when a kitchen isn’t on the hook to cook hundreds of different dishes at a moment’s notice: The likelihood of cranking out a string of breathtaking showstoppers rises exponentially.

Which means you’re a lot more likely to eat them, too. Among the dazzlers is plaa hed ($9), a modest-looking mushroom salad and the type of dish that goes invisible on a 300-item menu. Here, it goes electric: spindly shimeji mushrooms steamed, then tossed with ginger, shallots, mint, lime leaf, feathery wisps of bruised lemongrass, green apple, and enough chilies to make your eyes leak. Manila clams ($18) stir-fried with garlic, licorice-y purple basil, and a splat of fiery-sweet chili jam were a revelation: vivid, clean, delicious. If Mahaniyom were a pick-your-protein kind of place, you’d be tempted to try them all prepared like this. 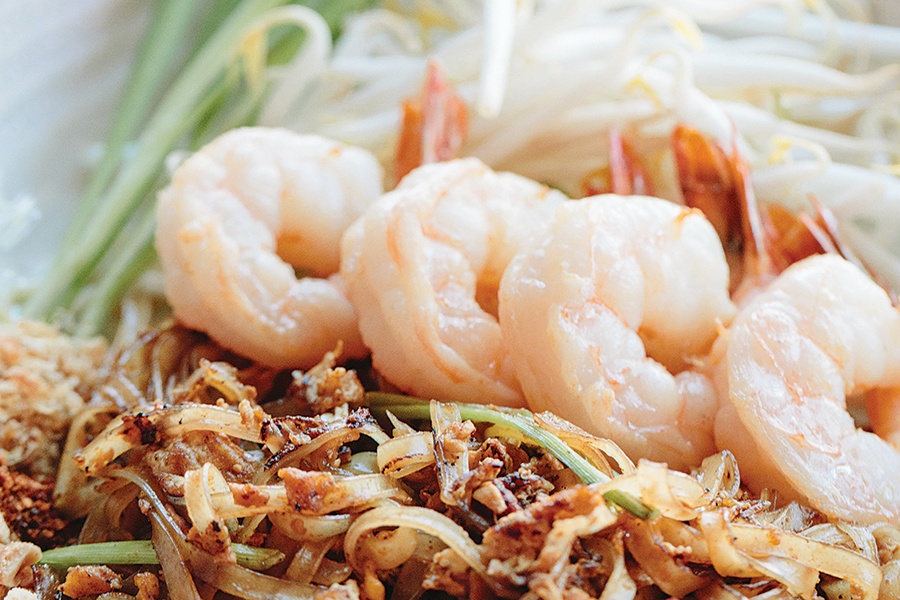 Instead your attention is directed to winners like house-cured sai krog khao ($12). A traditional fermented pork-belly-rice sausage, it has a soft (haters might say mealy) texture that won’t be everyone’s cup of cha, but my crew crushed every morsel. Then there’s the sensational beef massaman ($12) and its collagen-packed shank. Lusciously rich from gobs of coconut cream and pulverized toasted peanut, it had the vivid stratification of flavors—distinct notes of dried chili, makrut lime leaf, fresh turmeric, lemongrass, root-beer-y galangal, cloves, and nutmeg, plus a dozen other herbs and spices—that is the telltale sign of a scratch-made curry paste smudged together with mortar and pestle, or small-batched in a dry/wet grinder, not carpet-bombed into flat homogeneity by industrial machine. Prefer your massaman with seafood? No dice. But there’s a red curry with crabmeat ($18) that will knock your socks off.

I applaud the predetermined spice levels, too. That might sound like a small thing, but it’s actually huge. Here in Boston we’ve come to expect Thai restaurants (also: Indian and regional Chinese) to let us dictate chili heat by the number, like we’re ordering Buffalo wings at a sports bar. At Mahaniyom, the kitchen makes those calls. The beef massaman was a moderately incendiary 6 or 7 (out of 10). Wok-fried morning glory ($12), a type of water spinach, was hot as hell…and terrific. Crab fried rice ($18), meanwhile, was mild and soothing. When you leave the programming to the pros, you end up with a curious thing called balance. Just because you can take the heat doesn’t mean you should.

That said, there are a few weak spots: Klui puu ($12), deep-fried “flutes” filled with crab, pork belly, and shrimp, were pleasant but didn’t quite step up to the role of main crispy snack. (The flip side of a tight menu: less room for duds.) Though the kitchen resists making stunt food, here’s a place that could use some bells and whistles. Brussels sprouts ($7) with fish sauce were sweet and nicely charred…and too much like every version at every neighborhood spot you’ve ever been to. I think there should be more sizes of things—especially smaller items—to allow even parties of two to sample a wider swath. Finally, on busy nights, when the bare-bones staff is juggling an endless stream of takeout orders in addition to a full, 26-seat restaurant, you can sprain an eyebrow trying to source another round of drinks. 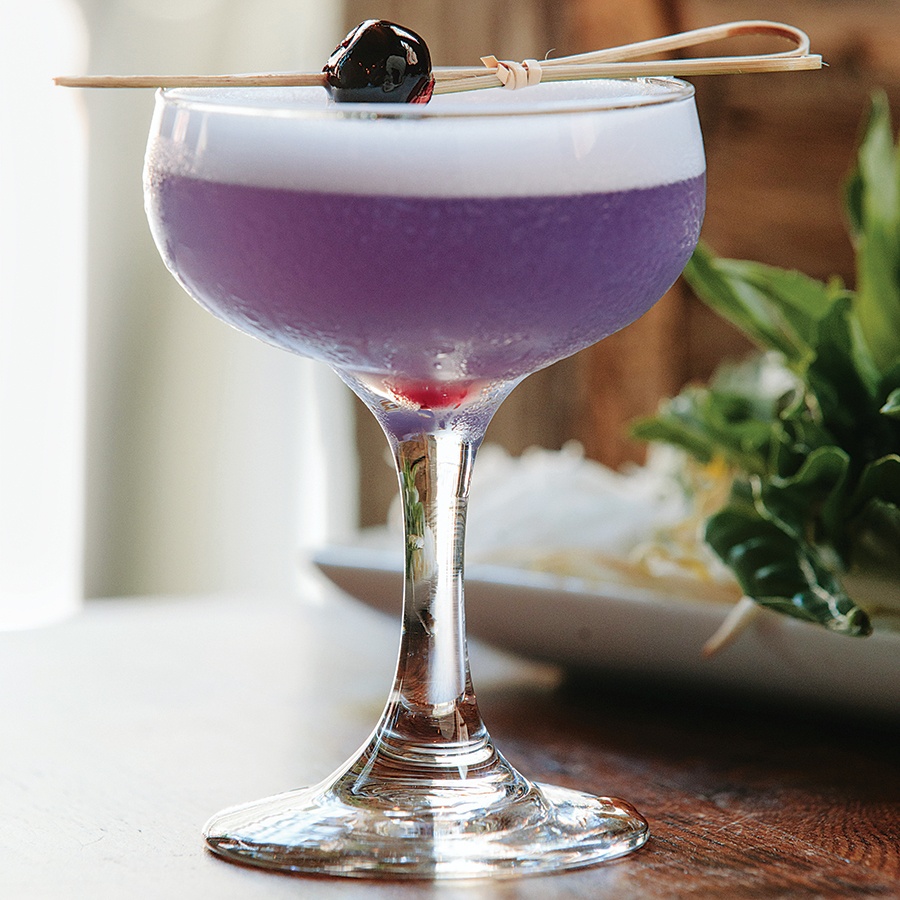 And Mahaniyom is a place you’ll definitely want another round, especially now that bars are finally—after an achingly long hiatus—available for bellying up to again. It’s a bold move to plant a flag as a craft-cocktail joint with a standard-bearer like Blossom Bar half a block away, but Boonnak (a.k.a. Boong, a longtime Shōjō alum) has the goods to back it up, whether it’s an impeccably balanced Sazerac ($13) tilted East with Thai-tea-infused rye, or the Bangkok First Class ($13), an Aviation riff that resembles melted blueberry gelato but hits the palate with exacting rigor.

Then there’s the Eleven Tigers rum shot ($10), one of four traditional herb-infused spirits called ya-dong, presented like a still life on a black plate with accompaniments that trace a map of your taste receptors: sour mango pickle, chili salt, sweet pandan-leaf-infused water, then the bitter rum itself. Historically, Boong says, ya-dong were elixirs sipped by overworked farmers “to help with the aching” and…and anyway. Bottoms up, folks: It’s been a long year and a half.