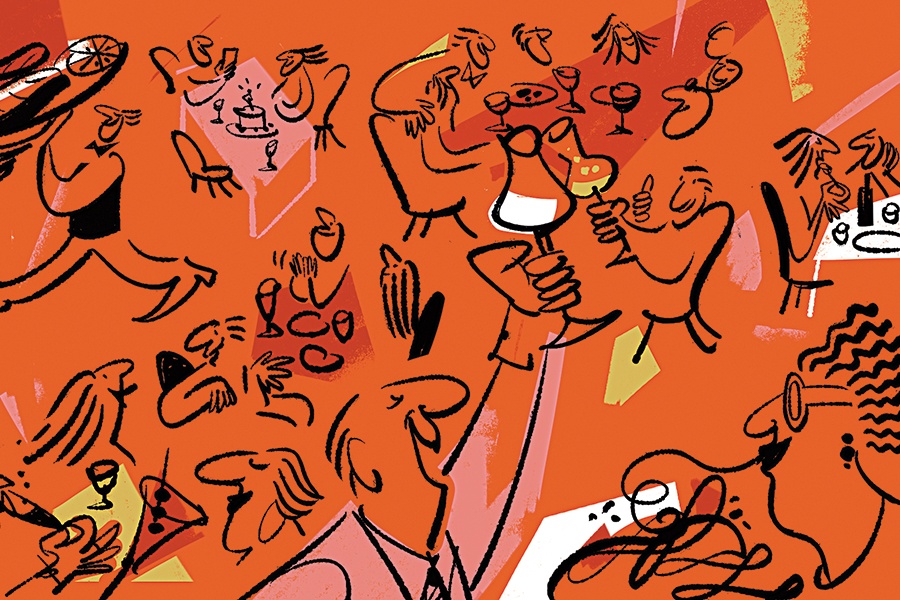 Whenever I get the blues and need a lift. Whenever I need a laugh and a story. Whenever I need a referral to a smart lawyer or doctor or carpenter, I head for the club. No, I’m not talking about the Harvard or UMass Club—I’m talking about a restaurant. Specifically, Toscano Restaurant on Charles Street on Beacon Hill. It’s been a research library, a source of inspiration, and a hoot to me for many years.

As you come into the restaurant, there is usually a short line of 10 or 12 people as you move toward the maitre d’ stand. You might see someone wearing Bermuda shorts and a T-shirt, or men in suits and women in dresses with heels. There is a hum to the place, as if everyone shares a secret and the secret makes them smile. “I see us not as a ‘special occasion’ restaurant,” Richard Cacciagrani, the managing partner, tells me. “Go somewhere else for a big family event. Use us for your nightly dining, your comfy place. The place you think of going three or four nights a week. We have a core of people who do exactly that.”

For that reason, the waitstaff never say, “I’ll be your server.” They approach each table, it seems, as a friend, not an employee. But they never get personal in an intrusive way as they observe spoons clinking on glasses and hear laughter—always laughter. At the bar, on your left when you enter, everyone seems to know one another as they banter with the bartender. A few steps away from the bar to the right, you enter the main dining room, with large windows that open in the summertime to the action on Charles Street. Unlike any other restaurant in the city that I know of, strangers can tell they’re in a special place as soon as they walk in. A club that they’re allowed to join for an evening, where everyone seems delighted that they’re all included.

In fact, there have been very few restaurants that you could call “clubs” in Boston over the past four decades. One of them was the main dining room at the old Ritz on the Public Garden. The other was Locke-Ober, in a downtown alley. But they were snobby places, high-end, mostly high WASP. They were not “ordinary people” places.

Toscano, by contrast, embraces diners from many walks of life: local tradespeople, small-business owners, hedge-fund managers, big-time surgeons, and rookie interns. Priests, out-of-town celebrities, and entrepreneurs. Young people starting new jobs, and tourists sent there by hotels. It’s a place where the CEO of a company that spearheads medical miracles is welcomed the same as the owners of the nearby hardware store. Here, the club is open to everyone, from near and far.

This particular club, as it turns out, has been going strong for more than 30 years. Toscano opened its doors in 1983 thanks to the hard work of three owners: Vinicio Paoli, Azita Bina-Seibel, and John Hauck. Paoli, who’s from Florence, loved to cook the regional dishes of his hometown. But anyone who’s ever been in a business arrangement will tell you that partnerships are tricky. Eventually, this original trio went their separate ways. Bina-Seibel and her brother, Babak, opened Beacon Hill restaurants Bin 26 Enoteca and Lala Rokh, among others. Hauck moved on to become the genial host and owner of the Living Room near the waterfront until it closed in 2019. Paoli became the sole owner and held onto Toscano.

There is a danger in being the owner of anything for many years. You can lose the fire in the belly. You can get exhausted, particularly in the restaurant business, which is historically the business that never sleeps. In the early aughts, there was a perception that the restaurant was becoming a little tired. Paoli’s recipes were as good as ever, but surroundings do matter. When the crowds stop coming, the word gets out. People like to see activity in restaurants. They want to see life around them, the babble of voices, the clinking of glasses. Without the action, little by little, the customers move on.

David D’Alessandro had been the CEO of John Hancock Financial Services. Among other achievements, he created the new Boston Marathon, sponsoring it and turning it into what many people today regard as the greatest long-distance race of them all. In December 2006, he bought Toscano with the goal of bringing the restaurant into the 21st century. David’s son, Andrew, was there as well, helping to run the show. Andrew was training and getting an education in the culinary world, and was eager to have an ownership adventure.

Jack Connors, cofounder of Hill Holliday, perhaps Boston’s premier ad agency, said to me at one point that David D’Alessandro was the best businessman in the city. David used those instincts to hire a man he knew could be the perfect manager for Toscano, and the best mentor for Andrew: Richard Cacciagrani, formerly the manager of the Palm, which at the time was located in Copley Square.

As it turns out, Toscano’s secret sauce would become the relationship between D’Alessandro and Cacciagrani. “David and I…trusted each other,” explains Cacciagrani, who ran special events for John Hancock at the Palm for several years before eventually moving into the new role as managing partner. “He knew my strong suit was making customers feel not only welcomed, but that they were in a special place. The manager should be the face of the restaurant.” The respect and admiration was mutual. Cacciagrani “is the Joe DiMaggio of restaurant managers,” David tells me.

But let’s not forget the food. “We have a big menu, many, many choices,” Cacciagrani explains. “That’s because we’d like you to come here seven nights a week and have something different every night.” The restaurant has never had a celebrity chef, so it allows its customers to have a voice. In fact, I like chickpeas, so I created what I called the “Giovanni salad,” which has chickpeas, tomatoes, beets, a wee bit of lettuce, oil, and vinegar. It’s not on the menu, but Toscano appreciates special requests from the regulars. One frequent bar customer backs me up, telling me that “Toscano is like my Italian grandmother. She made me anything I wanted. I always think that eating here is like going to a dinner party at someone’s large house.”

Testing Cacciagrani’s theory of a different dinner every evening, I went on a four-night spree after Toscano reopened in April following a pandemic-related hiatus. My four appetizers over those nights were minestrone soup, grilled shrimp with lemon, grilled calamari, and vitello tonnato. The entrées were capesante, a.k.a. scallops with leeks, white wine, and sautéed spinach; grilled North Atlantic salmon with mustard sauce; rack of lamb; and veal scaloppine limone.

As for the pastas—well, I could eat carbs for dinner every night, but my cardiologist advises against that. Nonetheless, Toscano has a lot of pasta choices, in full size or appetizer portions. My two favorites are gnocchi checca and the rigatoni Toscano, done with double smoked bacon, herbs, and tomato cream.

While most restaurants have big turnover in staff, Toscano has had employees who have been there for years and are an integral part of an intensely loyal crew. Amy Nomejko, for instance, the general manager, came to Toscano from the Cambridge restaurant Sandrine’s Bistro, where she was one of the owners. Deirdre Sheridan, a longtime bartender, is like everyone’s favorite sister. Peter Denny is the longest-serving waiter, having started with Paoli. He mentors the newly employed like a genial first sergeant, passing along a version of Peter’s Principles to newcomers. One of his top rules? Read your guests, and never oversell anything.

Not surprisingly, none of the staff defected during the COVID-related shutdown. They stayed connected with one another, and as other workers at establishments all over Boston made other plans, the culture at Toscano brought them back. “We’re a family,” a server told me.

There are nine seats at the L-shaped bar, and almost every night they are full, mostly with regulars. Jim Devaney is one of them, and has been there since the beginning. He is the mayor of Toscano. He has long silver hair, swept back like he’s playing a handsome hit man in a thriller. Devaney is responsible for the club within the club: the bar scene. He’s the glue, chatting up people on his left and right. When other regulars come in, he’ll pop out of his chair to greet them, giving them a big smile and a hug. Then he’ll turn to touch base with the high-top table-sitters, going from one to another, whether he knows the person or not. He’s like the famous saloon owner, Toots Shor, in New York, making the rounds to make sure everyone is happy.

The regulars are the ambassadors, talking not just to neighbors. They call greetings to folks at other seats as well. They swap stories and stock tips, and share advice with one another. Another longtime customer is Bob Marks, the landlord who owns the building and lives above the restaurant. He also dines there, most of the time anchoring the bar. In many ways, Toscano defines him. He, too, enjoys his role, wandering the tables and schmoozing with friends made at this club of clubs.

Every week that Toscano was closed, from March 2020 until this April, people would take walks on Charles Street and check the front door for reopening signs. Every week, there was nothing. The closure left a hole in the hearts of everyone who had depended on the restaurant for warmth, social therapy, and, of course, food.

I was there the night after the club reopened, complete with a new sidewalk café and an elegant wooden floor. Cacciagrani greeted me on the sidewalk in his face mask, but his eyes were smiling. The outside tables were full. People were coming into the restaurant looking at other diners, pausing, ready to elbow-bump. Then there was a collective “Oh, what the hell” followed by real hugging—with the hugs lasting longer than usual. “I haven’t even hugged my kids yet,” one woman said. “They’re still in lockdown.” By 8 o’clock, every table and bar seat was taken. There was a healthy buzz in the air, with laughing, raised glasses, and table-hopping once again.

I had two distinct impressions on that evening. One was that people need to be with others. We are social animals. We hate to “bowl alone.” The second observation was the pleasure of Toscano reopening. The club was again spreading joy and full tummies to all of the members who still don’t pay an initiation fee.

We, as Bostonians, are lucky to have our landmarks and historical sites that separate us from other cities. We’re also lucky to have a place like Toscano as a magnet for people wanting much more than a neighborhood restaurant. It’s a welcoming home away from home for all the folks of our city and for visitors from other towns and countries as well, showing them more proof that Boston is still, in John Winthrop’s words, a shining “city upon a hill.”