From special in-restaurant menus to to-go options, this year we’re grateful for the pros doing the work in the kitchen.

This year, forget about setting that 5 a.m. alarm reminding you to wake up and stick a 30-pound bird in the oven. Sleep in (you deserve it) and let the local experts work their magic on your meal instead. From traditional turkey dinners to vegan feasts to takeout packages that totally toss out the rule book, we’ve sourced this menu of dining options for you to gobble up. You’re welcome! 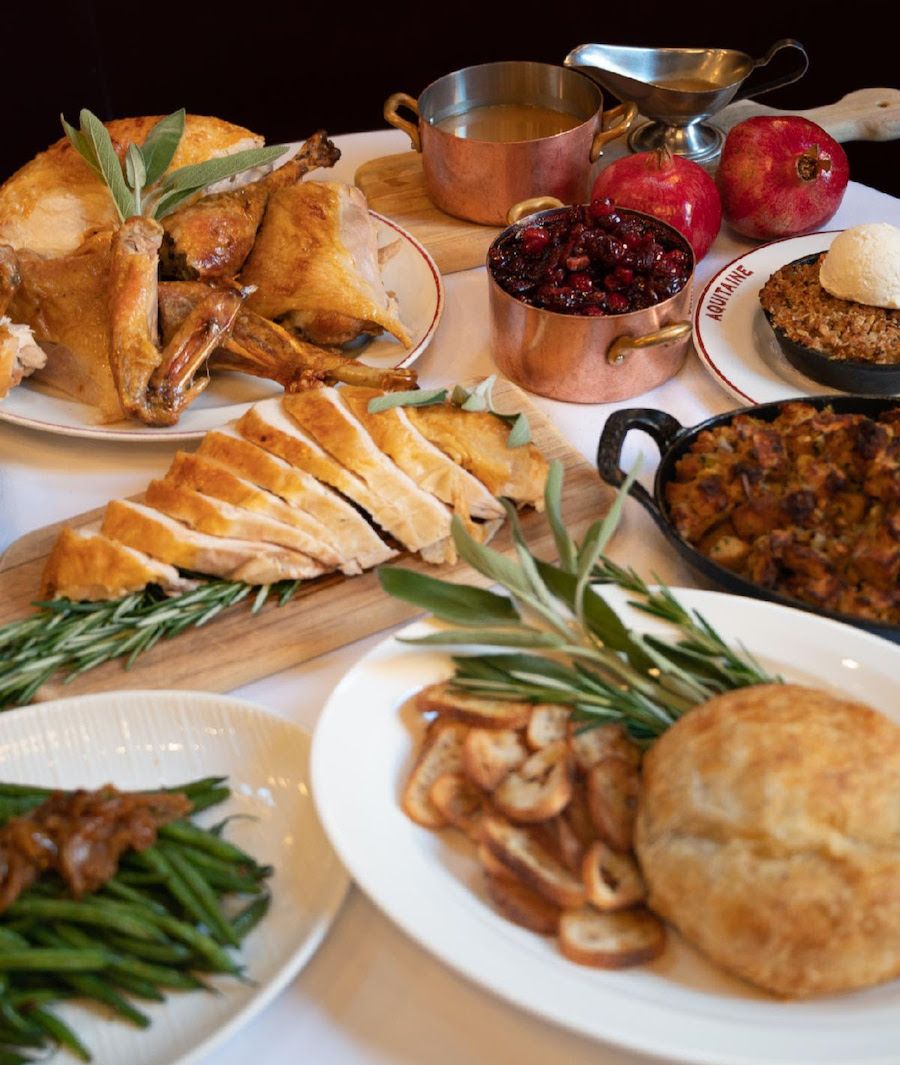 For a more sophisticated spin on a staid Thanksgiving supper, look to the to-go packages dished out by chef Dolly Bourommavong. Start your meal with a few cheesy choux pastries called gougeres (a French twist on the basic bread roll)—next, dive into a butternut squash and apple bisque, as well as caramelized apple and onion stuffing. The magnifique main event? That would be the duet of sliced turkey breast and turkey au vin with braised leg and thigh, all accompanied by pearl onions and cremini mushrooms.

Chef Colin Lynch knows that the last thing you’ll feel like doing after you wake from a Thanksgiving food coma is get back to cooking. And that’s why his generous Thanksgiving takeout offerings—a bounty of roasted turkey breast and leg confit with gravy, sage and dried plum stuffing, and much more—comes with bread, mayonnaise and enough turkey for leftover sandwiches to brighten your Black Friday. Order for two, four, or six guests, with desserts and breads (including the famed pecan dinner rolls) offered a la carte.

This Thanksgiving, Brassica bids you to separate the meal from the American myth-making that surrounds it. To that point, rather than gloss over colonization’s devastation of Indigenous communities (the way the history books often do), the JP eatery will donate 10 percent of all proceeds from its “Day of Gratitude” menu to the North American Indian Center of Boston. And what, exactly, is on that menu? The a la cart takeout options include whole roasted duck with orange char siu sauce and black apple stuffing, plus gooey mac ‘n’ cheese (sold by the quart) with a savory kick of shiro miso. Find special wines and bevvies on the menu too, as well as a honey pie made with locally harvested sweet sap.

Toss out the turkey and give “pig out” a whole new meaning with a whole-roasted pig dinner at this favorite Fenway-side haunt. Available for dine-in service and as a to-go package, the feast features a suckling pig that’s been slow-roasted for 14 hours, served alongside pork gravy and house-made barbecue sauce. Sides include sweet potatoes with marshmallows, mini pork meatball stuffing, and a slew of other goodies, plus apps of local oysters, clams, and shrimp to get your appetite going. There’s a ten-person minimum to partake in this feast, and you can always add a seafood tower or some lobster rolls if your table is especially full this year.

If you’re the type to feel a twinge of guilt when ordering a take-out Thanksgiving dinner, Juliet offers a happy medium between making a meal from scratch and offloading all the work. Behold its cook-your-own-Thanksgiving kit, equipped with everything you need to whip up a feast for four to six folks. It includes a brined turkey, gravy, mashed potatoes, cranberry sauce, honey-basil glazed carrots and more fixin’s. Turn it into a three-course feast with an appetizer add-on of spinach and artichoke dip, plus a dessert, such as the pumpkin pie with a faint kick of black pepper. And if you’d rather totally relax instead, the French-inspired cafe peddles a fully prepared version for $55 a person, too.

If your diet doesn’t allow for a traditional turkey as a Thanksgiving centerpiece, Charlie Lumpkins, a.k.a La Pheegan Chef, has you covered. Her all-vegan menu focuses on comfort foods normally denied those with plant-based palates: Front and center, for instance, are ten pieces of Lumpkins’ Sassy Jack Chick’n, a jackfruit and yucca drumstick delight. Round things out with mashed potatoes with vegan herb butter, gooey baked mac ‘n’ cheese, and mushroom gravy for dousing sweet corn cakes and walnut-and-cranberry stuffing. Each item off the a la cart menu (which you can find on Instagram) serves four, and do be sure to pick some pumpkin mini pies. As bite-sized as they are, these treats pack a mouthful of flavor. 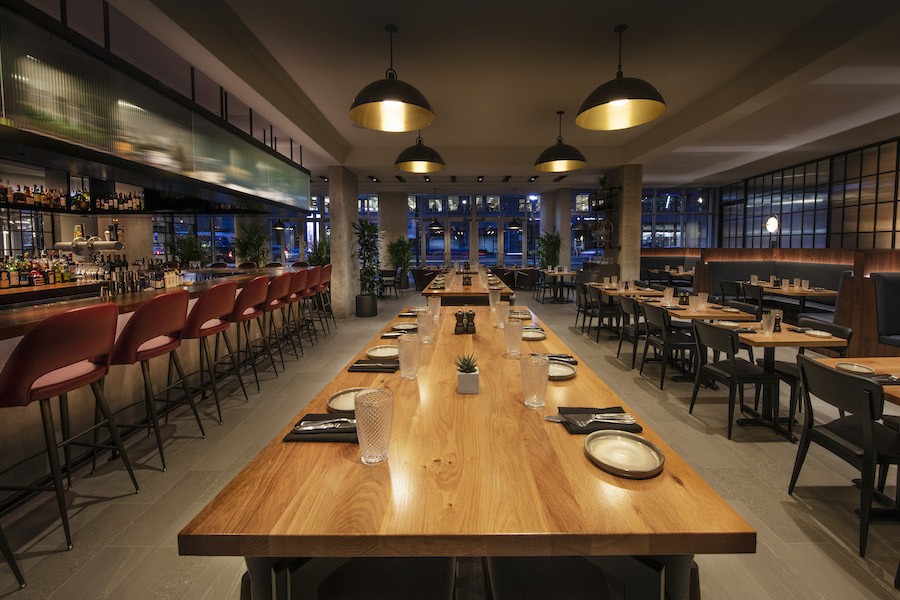 This Back Bay beauty at the base of the Colonnade Hotel is bringing something different to the Thanksgiving table. Sure, you’ve had turkey a million times before, but what about a cavalcade of coconut popcorn shrimp, garlicky crispy ribs, and roasted duck with honey-cranberry glaze? Don’t worry, though: Guests here can also find a traditional roasted turkey dinner with wild mushroom brioche stuffing, if they’d rather pass on more playful fare, like the cheeseburger pizza. The to-go menu, meanwhile, focuses on familiar favorites—roasted turkey, mashed potatoes, and green beans—but still adds enough accents to keep things interesting. See: the crème fraiche and cranberry chutney that upgrades Lucie’s butternut squash bisque.

Entertaining isn’t for everyone. Skip the stress and book a staycation at the Fairmont Copley Plaza instead, where the Thanksgiving feast package includes a night’s stay for two plus reservations at on-site restaurant Oak Long Bar + Kitchen. Alongside the normal all-day menu, chef Zaid Khan tempts T-day guests with four a la cart specials, such as bacon-wrapped turkey breast roulade—and if you book a room, you can toss back a few more Turkey Old Fashioneds, crafted with Legent bourbon that’s been infused with drippings from a fresh-from-the-oven turkey. Oak is open to non-hotel guests, as well, though we maintain that a quick stroll upstairs to a hotel room beats gnashing your teeth in bumper-to-bumper holiday traffic on the Pike, any day. 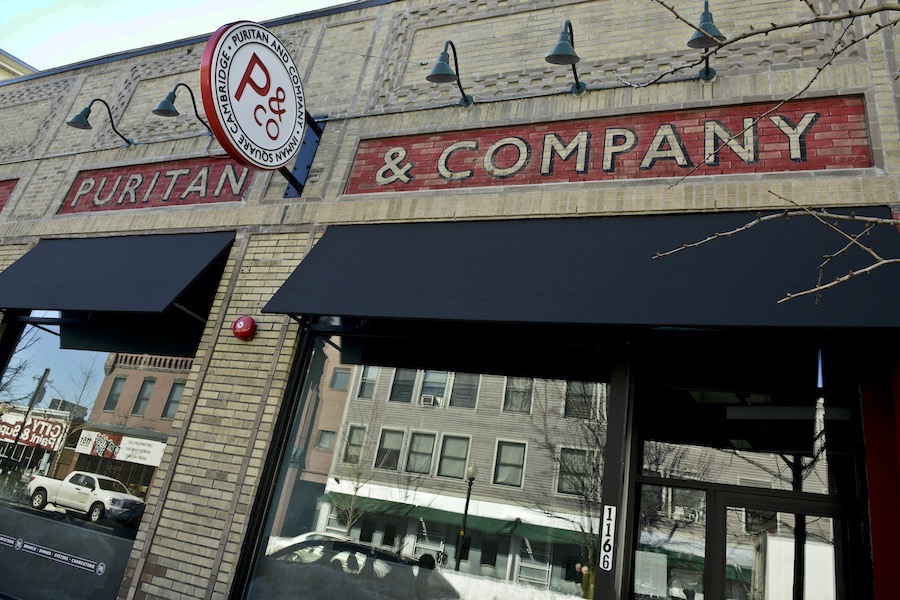 Chef-owner (and Mayflower descendant) Will Gilson charts his own course for a Thanksgiving-to-go feast that gilds the classics. The $120 “whole shebang,” for instance, designed to serve two, is a goldmine of herb-roasted turkey breast and a rich mushroom and turkey-sausage stuffing with notes of sage and zippy cranberry chutney. Acclaimed pastry chef Brian Mercury lends a hand with sweet showstoppers, from fresh-baked Parker House rolls to pumpkin, pecan, and apple pies. Everything is offered in oven-happy packaging with complete reheating instructions, and while the heavenly aroma of maple-glazed sweet potatoes fills the kitchen, you can raise a toast with some mulled bourbon cider.

Chef Sarah Wade promotes side dishes to starring roles at Stillwater. All you have to do is worry about the turkey—she’ll provide the heaps of mashed potatoes overflowing with sour cream and chives, wild mushroom stuffing brightened with thyme, and Brussels sprouts lovingly kissed with maple and sea salt. (Don’t forget her homemade white rolls with whipped and salted butter, which are perfect for sopping up the turkey gravy.) You can order everything as individual sides, or packed up to feed up to eight folks. Heads up, though: The desserts are so delicious, you may wind up eating a whole pie (apple crumble, perhaps, or pumpkin cheesecake swirl) all on your own. 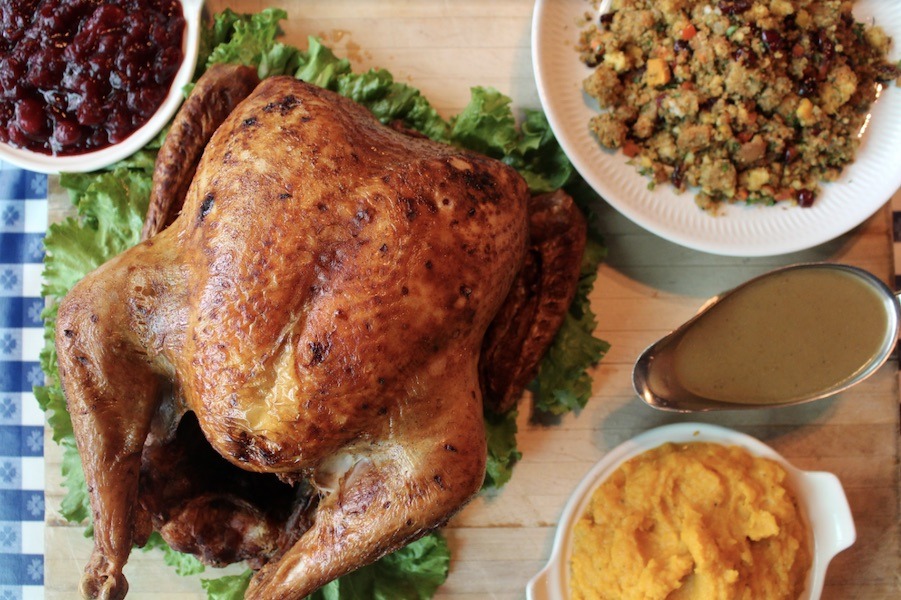 Sure, Summer Shack’s Boston and Cambridge locations have got you covered if you need a traditional Turkey Day, with to-go options for either just a roasted bird or a full meal with mashed potatoes, cornbread stuffing, and a slew of other sides. This is a time for indulgence, though, so take chef Jasper White up on his offering of Southern fried turkey, and all its crisp-skin decadence. While you’re at it, dive into the lobster pot pie, which sees a bounty of lobster meat swimming in a creamy base—spiked with sherry and a hint of cayenne—alongside potatoes and veggies, all stuffed in a buttery pastry shell.

Sweet Cheeks, the first Boston restaurant from former Top Chef star (and current Chopped judge) Tiffani Faison, just had its 10-year anniversary—quite a feat in today’s restaurant industry. Celebrate the stalwart barbecue spot this Thanksgiving with its tens-across-the-board biscuits, served with honey butter and pumpkin-apple spread, and perfect for swiping up gravy. The biscuits are also used for the stuffing included in Sweet Cheek’s T-day to-go packages, which feed up to 12 guests with a brined and smoked bird and sides of buttery mashed potatoes, decadent broccoli casserole, and more. You can also order offerings a la carte, including the candied yams with molasses and brown-butter walnuts, and wash down desserts like maple buttermilk pie with pairings from wine director Charlie Gaeta. 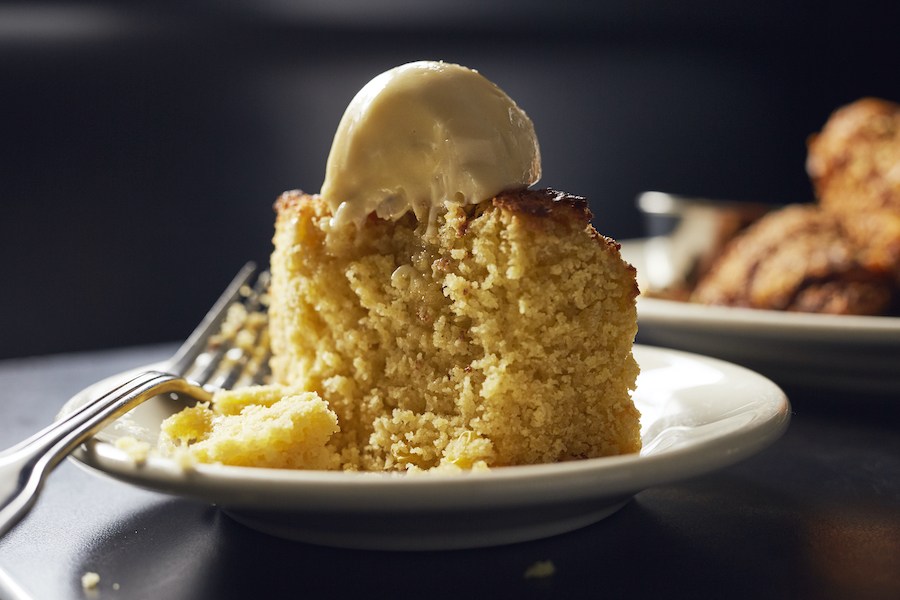 Turkey gets most of the love on Thanksgiving—but honestly, for taking the edge off some of the more awkward family-reunion exchanges, booze is usually the real MVP of the day. This year, turn to Trina’s roster of creative, large-format cocktails available for pickup: For instance, the sweet Mai-Tai-like Drunken Monkey—rum, velvet falernum, and lime—goes well with the half-turkey for two, melty mac ‘n’ cheese, and cornbread stuffing. Bourbon Brussels sprouts and bourbon pecan pie, meanwhile, can be chased with a Rockin’ Chair cocktail, which mixes tea-infused bourbon with ginger cognac and lemon. All the bevvies come in either pint or quart sizes. Spoiler alert: You’ll need the quart.

Farm-to-table spot Urban Hearth always manages to evoke soul-warming flavors, and chef Erin Miller’s Thanksgiving packages are no exception, anchored by a sage-and-cider-brined roasted turkey breast and confit leg served alongside stuffing of apple, challah bread, and fennel, plus gravy and mulled wine cranberry conserve. Dessert, meanwhile, will satisfy the indecisive with the Thanksgiving pie sampler: a box of four five-inch pies including apple crumb, maple pumpkin, and toasted coconut cream. Can’t decide what to drink? Spring for a wine “surprise” and let the restaurant pick a bottle to bolster your feast.

The Thanksgiving to-go menu at Vincent’s is a canvas of classics. Roasted turkey breast and smoked leg. Fennel sausage stuffing and spice-roasted parsnips. Mashed potatoes and warming squash soup. The vegetarian variations, meanwhile, include hearty futsu squash stuffed with sprouted lentil, brown rice, and farro pilaf that’s just waiting to be doused in roasted mushroom gravy. Generous packages feed multiple people, and you can add on wine (or some fancy French bubbles to lend that celebratory air). Do check out the goodies offered by sibling spots Mamaleh’s and State Park, too.