Between cool food halls and grocery-deli-bars, colossal cookies, and a world-famous chef, 2022 will be an exciting year to dine out.

Nearly two years (and a rollout of vax and booster shots) since the pandemic disrupted dining out as we know it, plenty of challenges still face restaurants—but there is much to celebrate, too. Add to the “wins” column this exciting handful of upcoming openings, including a couple of cool grocery-deli-bars that local tastemakers have designed with our new normal in mind; a suburban expansion from a beloved restaurant group in Boston’s Chinatown; and celeb-chef Gordon Ramsay’s entrée into New England. Here are nine tasty morsels coming this winter to a neighborhood near you. 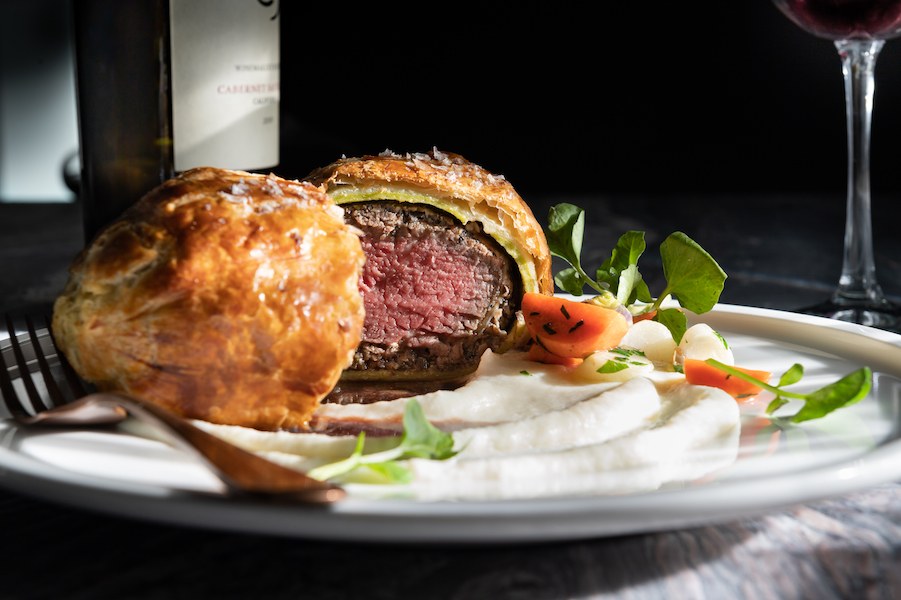 One celebrity chef’s door closes and another one opens (because really, who else can afford the rent?): Gordon Ramsay is opening a new restaurant at the Back Bay Mandarin Oriental hotel, where Daniel Boulud’s Bar Boulud shuttered in 2020. The Hell’s Kitchen and Masterchef star, whose name is on more than 30 international restaurants (including his Michelin-starred original in London), will debut a brand-new concept, Ramsay’s Kitchen, in Boston around late January. The menu vows to take diners on a global tour of Ramsay’s favorite dishes, including his show-stopping signature Beef Wellington, as well as pan-seared scallops with house-cured pork belly, a flavor combination inspired by his travels in Asia and perfected with local shellfish. “I absolutely love the energy of Boston and consider it a premier dining destination in the country,” Ramsay said in a statement. Other dishes will pay homage to our region, such as a smoked bacon-imbued New England clam chowder, and Maine lobster bouillabaisse. The 180-seat Ramsay’s Kitchen will have a bar and lounge, main dining room, raw bar, two private dining areas, and a seasonal patio.

At Celeste, their Peruvian restaurant in Somerville, and at Esmeralda in Vermont, which offers day-long dining experiences centered around a traditional earthen oven, chef JuanMa Calderón and partner Maria Rondeau have earned local and national acclaim for recreating cozy dinner parties using family recipes. When they open La Royal in Cambridge in late January, their latest venture will be the closest yet to the place where they started off as a supper club: “We’re simply thrilled to be right around the corner from our home,” Rondeau says. Starting with dinner service on Tuesday through Saturday nights (lunch and brunch to come), La Royal will offer creative takes on regional Peruvian dishes, such as a filet mignon lomo saltado, a dish that reflects Calderón’s Peruvian-Chinese roots, all paired with pisco sours and mezcal cocktails. The restaurant—named for a nearby street—has two 24-seat dining rooms, one including a 12-seat bar and one they plan to offer for private events. The cocktail program will feature macerated liqueurs house-made in collaboration with food scholar Darra Goldstein. And speaking of collaboration: La Royal is currently seeking $75,000 through NuMarket, a crowdfunding platform that returns your investment in the form of store credits once the project comes to life. 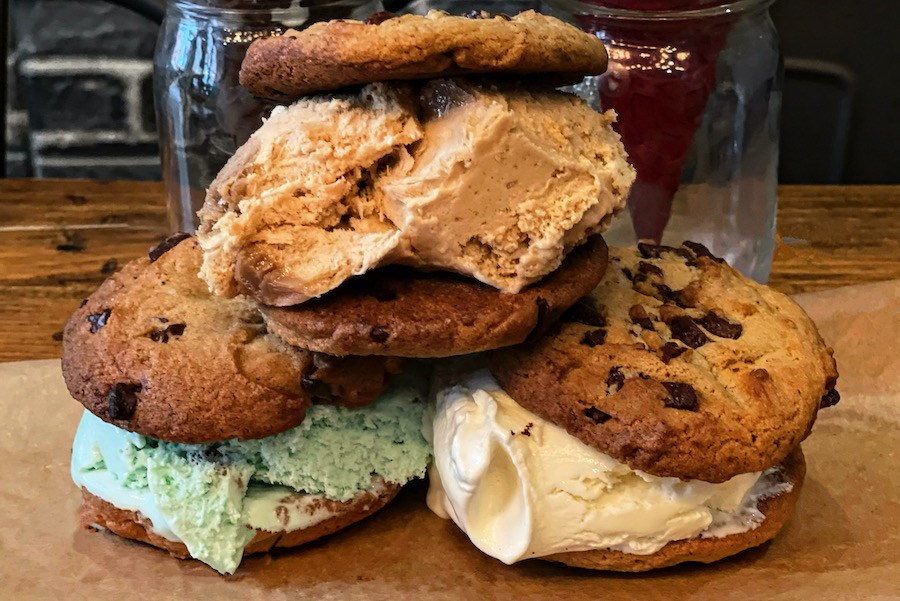 Never one to hold back on Twitter or in the kitchen at Table, the award-winning, family-style trattoria she owns in the North End, Jen Royle is audacious. So it’s no surprise that when she learned a sandwich shop became available across the street from her restaurant and its neighboring Table Mercato, an Italian market she opened peak-pandemic, “I jumped on it within an hour,” she says. The result will be Table Caffé, an “Italian Candy Land” just awaiting one final inspection before it can open. Along with a full espresso menu, Table Caffé will house all the existing sweets from the Table universe, with Royle adding new gelati to the mix. The self-trained dinner-party host (she hates being called “chef”) has been developing her gelato-making technique using an ice cream machine imported from Italy, and she’s been testing recipes in more than a dozen flavors. Expect to try her scoops on house-made waffle cones, in cups garnished with a cookie, or sandwiched in a plush brioche roll, in the style of a Sicilian treat Royle has been craving since a trip there last January. Hey, when Jen Royle wants something, she tends to make it happen. 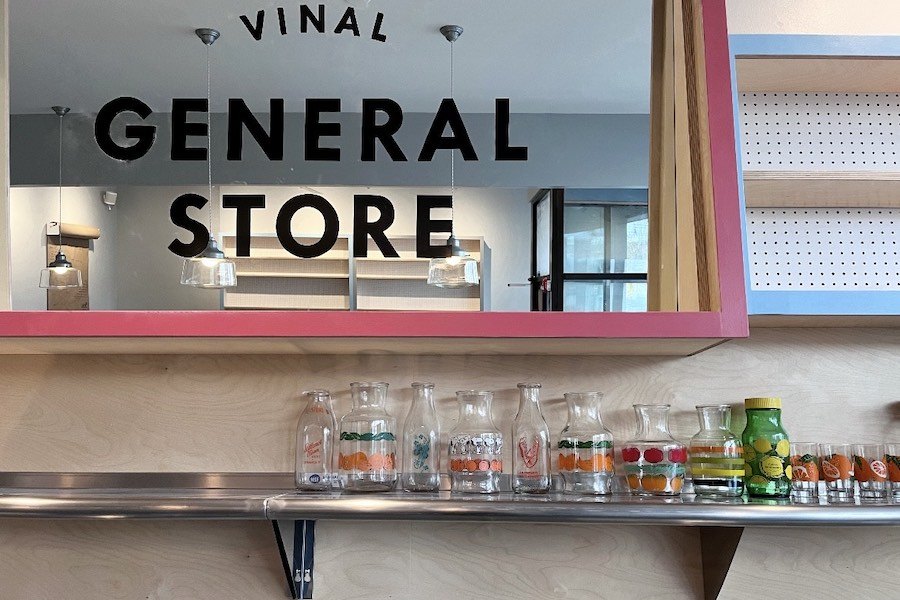 The best classic New England general stores stock themselves with their local community in mind—naturally, then, this modern iteration headed for Somerville’s hip Union Square is going to have a bar. Coming soon from the folks behind next-door Vinal Bakery, Vinal General Store will provide seated space for enjoying beer, wine, and soft drinks that play on New England nostalgia (hello to the entire line of Polar Beverages and glass bottles of Moxie) alongside a prepared food menu of classic and reimagined deli subs. A selection of bar snacks, meanwhile, will highlight the store’s retail items: “I’m calling them New England-style hors d’oeuvres,” says general manager Chloe Nolan, pointing to options such as house-made clam dip paired with Cape Cod Potato Chips. When you just need to grab something to take home, you’ll find the shelves stuffed with pantry staples from all over New England (think: Tandem Coffee beans and plenty of maple syrup), as well as Vinal’s signature English muffins and other baked goods, Make & Mend art supplies, greeting cards, old-fashioned candy and snacks galore. Vinal General should be open by early January. 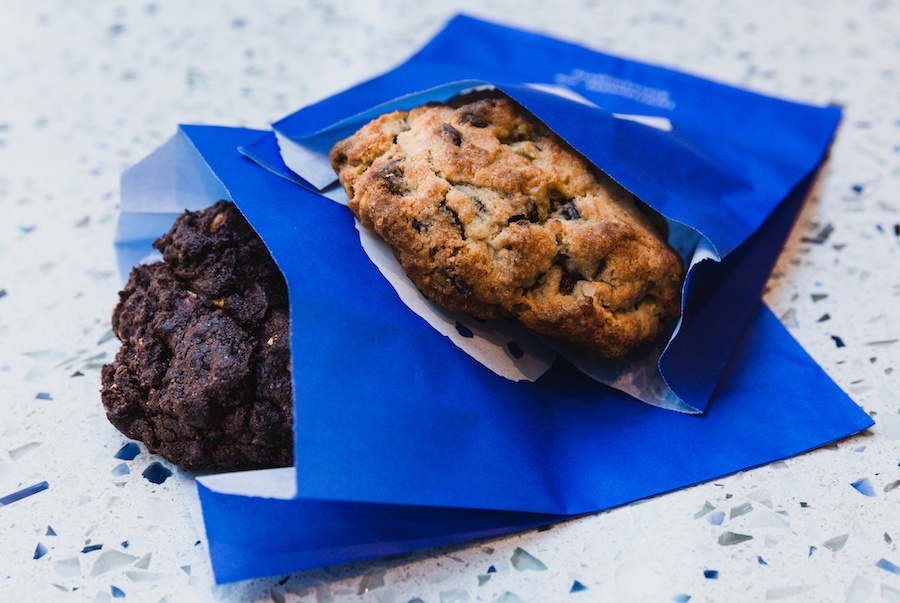 Loaded with chocolate chips and walnuts, Levain Bakery’s signature cookie was first created by its founders to serve as fuel for their triathlon training—a slightly ironic origin story for a boutique bakery chain built on a six-ounce behemoth of dessert decadence. Future Boston Marathoners will have to report back on these cookies’ pace-sustaining powers, as the 26-year-old, NYC-founded bakery is set to open its first New England location on Newbury Street in February. There, an open kitchen will produce fresh daily treats, including five craveable flavors of cookies, plus blueberry muffins, cinnamon butter brioche, banana chocolate chip loaf cake, and a variety of fresh breads. You’ll also find tea, espresso, and other beverages made with locally sourced dairy. 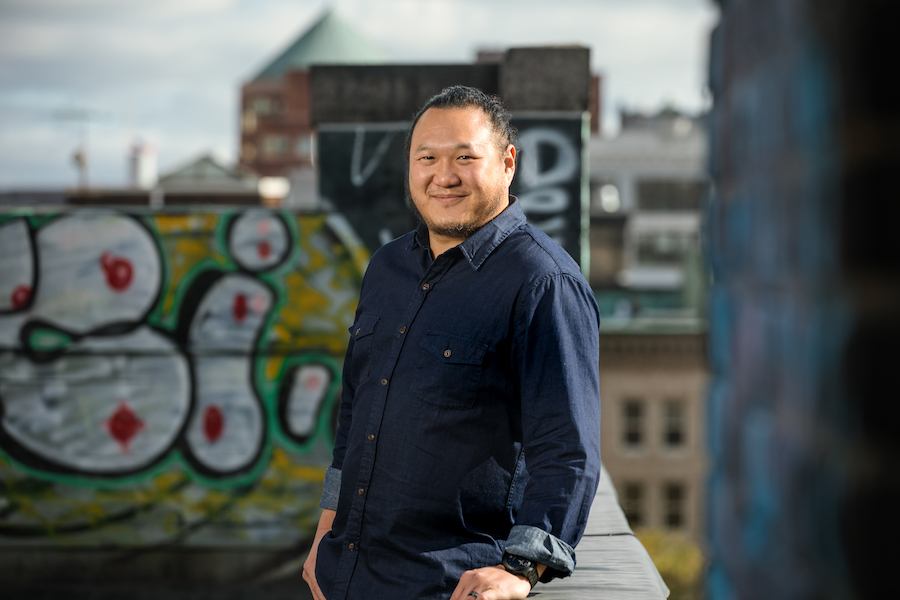 The name Nomai nods to a Japanese tree with deep roots, which is fitting for the latest from Brian Moy: After all, the restaurateur’s family has operated the landmark China Pearl in Boston’s Chinatown for decades now, and Moy branched out by launching two locations of his Shōjō restaurant, with a third in the works for 425 Massachusetts Ave. in Cambridge. (He’s also behind Chinatown’s currently-closed Ruckus noodle shop; its reopening time frame is TBD.) Now Moy is planting Nomai in Hingham, just a bit outside the city. A New American restaurant with pan-Asian flavors, expect a destination for date nights and family celebrations replete with raw bar offerings, shareable small plates, and larger-format portions for sharing. Headed for the former Rustic Kitchen space at the Derby Street shops, Nomai is Moy’s largest project to date (not counting his family’s multi-floor dim sum house), and will have a year-round patio, to boot. 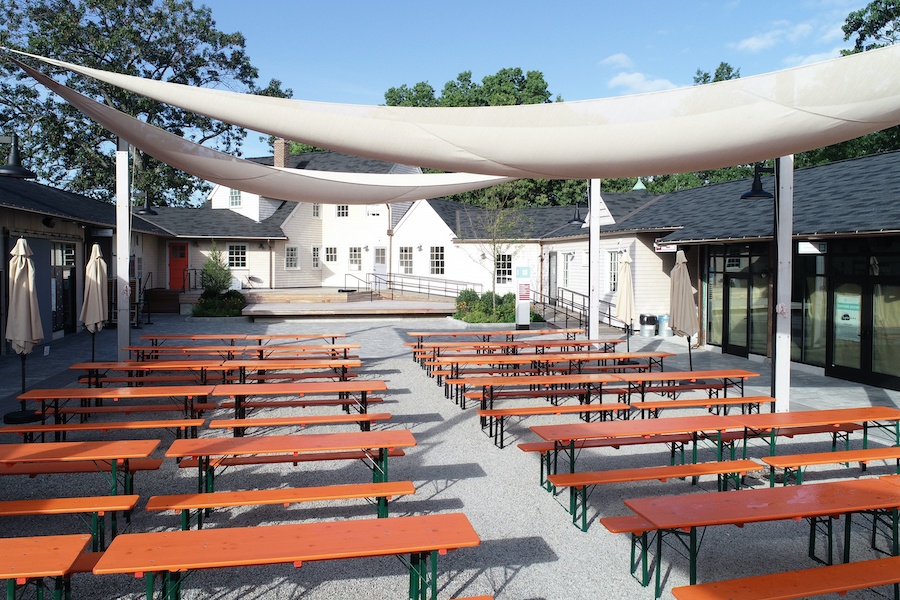 Super Bien (among other additions to the Charles River Speedway)

This past summer, a cluster of quaint, one-time horse stables, auto garages, and offices in Brighton reopened as the revitalized Charles River Speedway marketplace. First came a new location of Notch Brewing, which has already enticed plenty of locals to check out the Architectural Heritage Foundation’s latest vision for one of Boston’s historic properties. Next up: a new location of Somerville’s Tipping Cow Ice Cream, a past Best of Boston winner, opens at the Speedway on Friday, Dec. 10. License-related and other delays have held up the launch of other culinary concepts, including The Koji Club, an eagerly awaited sake bar from O Ya alumnae Alyssa Mikiko DiPasquale that is now slated to roll out in January. Hummus v’Hummus, a new concept from The Chubby Chickpea and Simcha chef Avi Shemtov, will open pending the arrival of refrigeration equipment. Another vendor we can’t wait to visit is Super Bien, a “grocery bar” from preeminent local Latin foods brand Buenas, which already has a kiosk at Somerville’s Bow Market. Construction at the Speedway spot remains ongoing, reports founder and Miami native Melissa Stefanini, who promises some “1990s/South Florida/VIBES” when the place finally opens. Super Bien will sell Spanish wines, plus a grab-and-go selection of snacks made with Buenas products, flan from La Flanateria, and a small menu of hot food that’s made to order, including Buenas’ signature empanadas. Before Super Bien gets to the finish line, though, Stefanini is raising $35,000 via NuMarket, a crowdfunding platform that returns your investment in the form of store credits once the project comes to life. 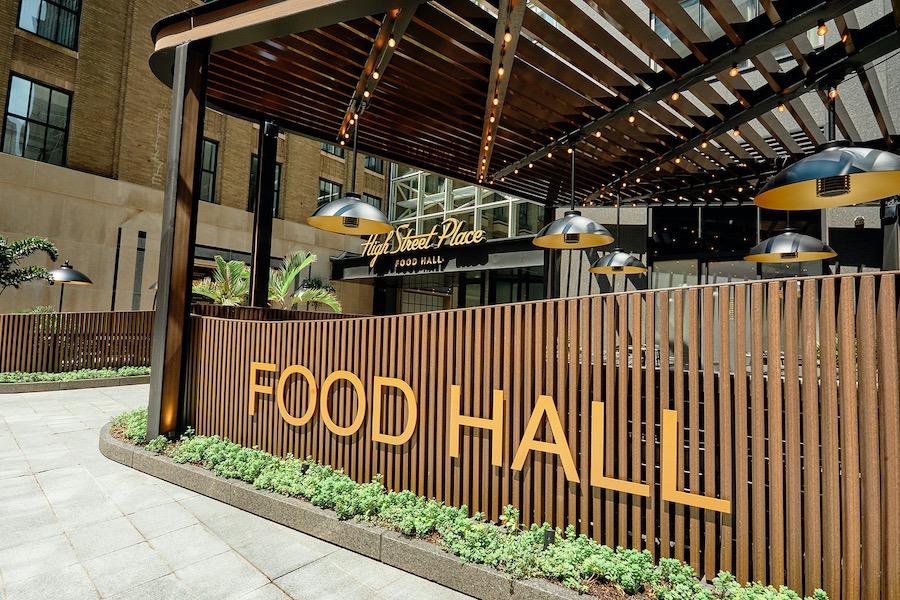 After all the attendant pandemic-time delays, this massive Financial District food hall should finally—really this time—open its doors in March 2022. Since we first covered this highly anticipated smorgasbord, a few tempting newcomers have been announced. Among them is Bubble Bath, a Champagne bar and the third HSP concept from chef Tiffani Faison’s Big Heart Hospitality. Kutzu, meanwhile, is a new Asian-inspired concept that will warm us up with bowls of pho and ramen. A third local location of Jewish deli Mamaleh’s is headed for the hall, which will also offer a permanent home to pandemic-born pop-up Lionheart Confections, a creative, crave-worthy doughnut shop from pastry chef Kate Holowchik. All told, High Street Place will bestow 19 culinary concepts upon us when it’s ready. 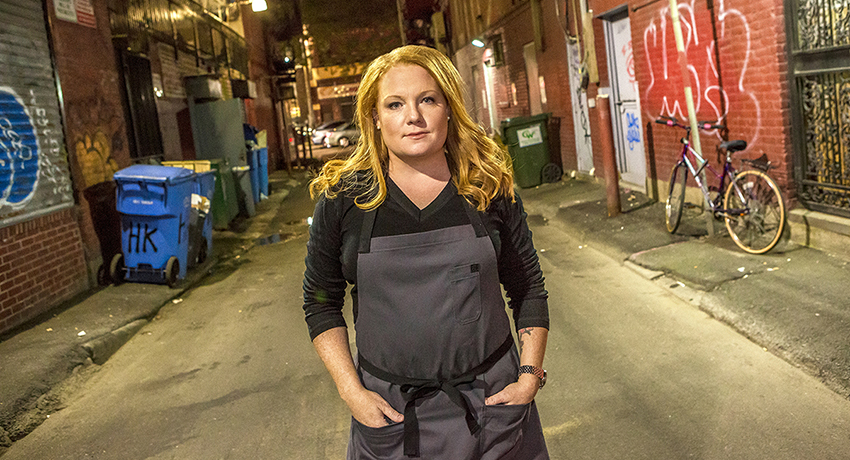 One might assume that developing three new concepts for an ambitious downtown food hall would be quite enough to keep Tiffani Faison busy, but in fact the celebrity chef is also reinventing one of her Fenway neighborhood restaurants in 2022. (All while jet-setting around to judge on location at the Chopped kitchen studios, no big deal.) Tiger Mama closed at the end of October to make way for a to-be-revealed new concept. Faison isn’t sharing any details at the moment, so maybe we’re being a bit optimistic about the timeline, but at the very least we highly anticipate news this winter of what’s to come to a prominent Boylston Street space from one of Boston’s best chefs.