Restaurant Review: Contessa Is Worth the Wait

Once you (finally) score a seat, you'll find the table is set for exceptional Italian. 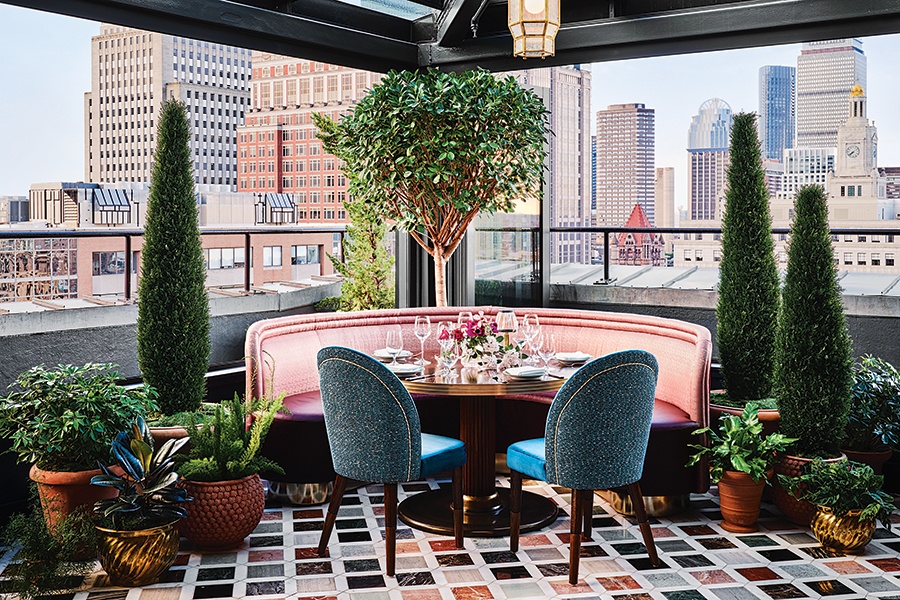 What a rare vacant table at Contessa, the most in-demand reservation in Boston, would theoretically look like. / Photo by Douglas Friedman

I once got into Contessa for dinner three times in a single week. And if that doesn’t explode your brain, well, clearly you’ve never tried to get into Contessa. Open since June, the “grand trattoria” occupying the Newbury Boston’s glass-walled top floor—a manic-maximalist fever dream of checkboard tiles, black-and-white stripes, and postcard-caliber cityscapes—is hands down the toughest table in town. When reservations open 30 days out, even so-so time slots get scooped up in minutes. Prime-time seatings? Good luck. After three stalkerish weeks of doing the Resy-app tango left me with a 10 p.m., a pair of 5s, and a phantom twitch in the old fingertip tendon, my best guess is the coveted 7-to-9 block is the hot-table equivalent of real estate pocket listings. Maybe the new lunch shift will calm things down?

I’ve been trying to remember the last time a Boston restaurant that wasn’t, you know, a twee 30-seat sushi counter ginned up such palpitating demand. Radius circa 2000, perhaps? Off-Main Craigie? One OG source swears it’s been since Jasper’s (our 1993 pick for Best Seafood) was hot. It’s been a minute, anyway. New Englanders tend to save the fortress-y gatekeeping for our social clubs and charitable galas. Our restaurants, not so much. It’ll be interesting to see if local diners embrace the dance.

Contessa is the first foray north into the hinterland provinces by Major Food Group, Manhattan’s buzziest restaurant empire, which made its reputation on the one-two punch of exceptional food and what I’ll call strategic velvet-ropery. New York foodies seem to dig it, and I had some of my best (and most logistically obnoxious) meals of the 2010s at MFG hot spots Carbone, Dirty French, and Torrisi Italian Specialties (RIP). The good news: If you can make it through Contessa’s table-scoring gauntlet—with appetite and spirits intact—there’s a big payoff in the dynamite Italian food coming out of the kitchen. For that, thank celebrity-chef principals Mario Carbone and Rich Torrisi, whose rock-solid recipes are dispatched by executive chef Matt Eckfeld, a longtime MFG acolyte, with remarkable consistency, technical moxie, and precision-tuned aplomb. Flavors loom vivid and strong.

Contessa repeats the winning formula plied at MFG’s flagship Carbone: putting midcentury Italian classics through the ringer to spruce them up for 21st-century palates and arrive at an ultimate rendition that—and this part is key—remains recognizable as the original dish: no wild, riffy deconstructions. Where Carbone takes on red-sauce Italian-American, Contessa’s focus is Northern Italy…by way of north Jersey. Less tomato and basil; more butter, mushrooms, cheese, and cream. Meatballs aldo ($20), made with pork, veal, and bacon, ditched marinara red for a luscious beige sauce fueled by whole-grain mustard, heavy cream, and the rendered-up dregs of the earthy mushroom broth they get poached in. They were divine. Ricotta gnudi ($20) defied the laws of physics, somehow straddling the line between light as air and rich as pillowy knobs of molten sheep’s cheese nestled in sizzling browned butter.

When was the last time you were blown away by a shrimp pasta, a subgenre that tends to possess all the primal wow of a fish-option compromise forged in committee? Here, the sweet decapod crustaceans get forged by hand into springy mezzaluna ($24): half-moons plumped out like Chinese har gow dumplings bathed in rich, butter-mounted mussel stock, tomato conserva, and a not-for-crybabies hit of chili flakes. They were fantastic, edged out only by the revelatory magic of my favorite Contessa dish: macaroni con cinghiale ($25). Eckfeld and crew grind wild boar and chicken livers in-house, simmer them slowly in aromatics, then fold in dark chocolate, crème fraîche, nutmeg, cloves, and allspice and prolong the melt until it all collapses into rich, layered unctuousness reminiscent of a Oaxacan-style mole sauce. 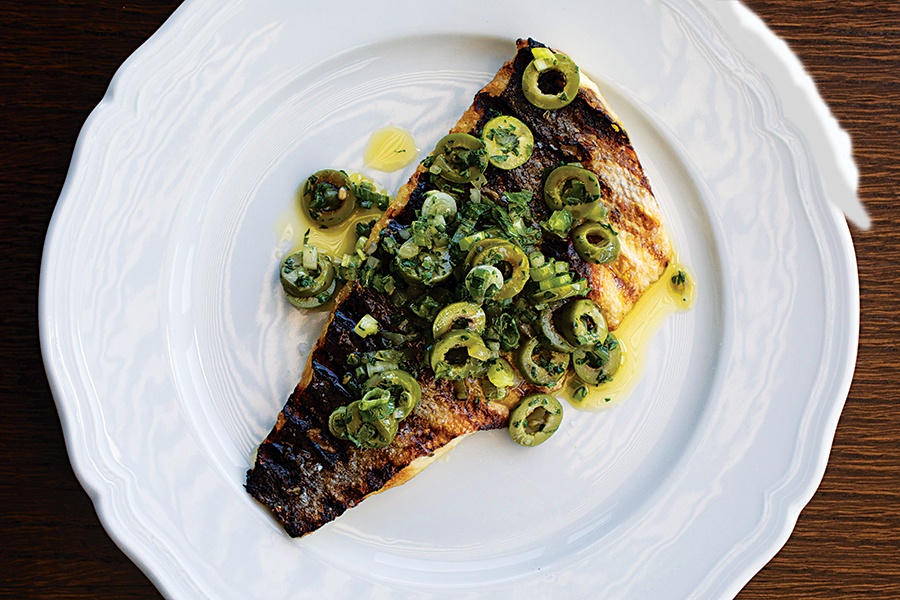 The food’s exceptionalism is soft-pedaled by the restaurant, and I think the underpromise/overdeliver toggle is key to Contessa’s appeal. GRILLED MEDITERRANEAN BRANZINO, barks the menu—sans descriptors—in its meaty monotone. Getchah grilled Mediterranean branzino right here. Good advice. This one ($38) gets rocketed out of garden-variety-ville with a bright-and-briny salsa verde of rough-cut pickled green tomatoes and sliced Castelvetrano olives, plus cordial-thick pools of good olive oil, the astringent and peppery qualities of which bloom and intensify on the way to your table from the jacked-up plate heat. The fish was moist; the skin, charry and assertively salted. Hardly a revolutionary dish, but man, was it damned near perfect.

Subjecting middlebrow grub to apotheosis isn’t a foolproof formula, of course. In the wrong hands, you end up with overpriced basic-chow for the moneyed non-foodie. At Contessa, though, it’s more like those singing competitions where the mousy contestant shuffles onto the stage, mumbles the title of some dusty warhorse, then wails a divine rendition that brings down the house. No dish I tried pulled off that switcheroo with more panache than the dowdy old braised veal ($34) given sprightly relevance by cranking the citrusy coloratura (lemon, orange zest, garlic, parsley) of the gremolata up to 11, and subbing a bright-toned white wine for the red typically used to coax collagen-rich calf cheeks into melting submission. It was Susan Boyle–level great.

Which only made it more disappointing when the coal-oven-burnished pizzas presented as wobbly karaoke amid so many showstoppers. Frankly, I’m puzzled there’s a pizza section at all—it’s not an item in the MFG wheelhouse. The salumi ($24) pie I tried was slightly better than the clams oreganata ($25), but the general meh-ness, especially of the crust, made me wonder if Contessa the Concept is being groomed for syndication, Boston’s simply out-of-town tryouts, and the pizza is a tacked-on crowd-pleaser meant mostly to woo Las Vegas or Charlotte down the road. I’ve heard worse ideas. 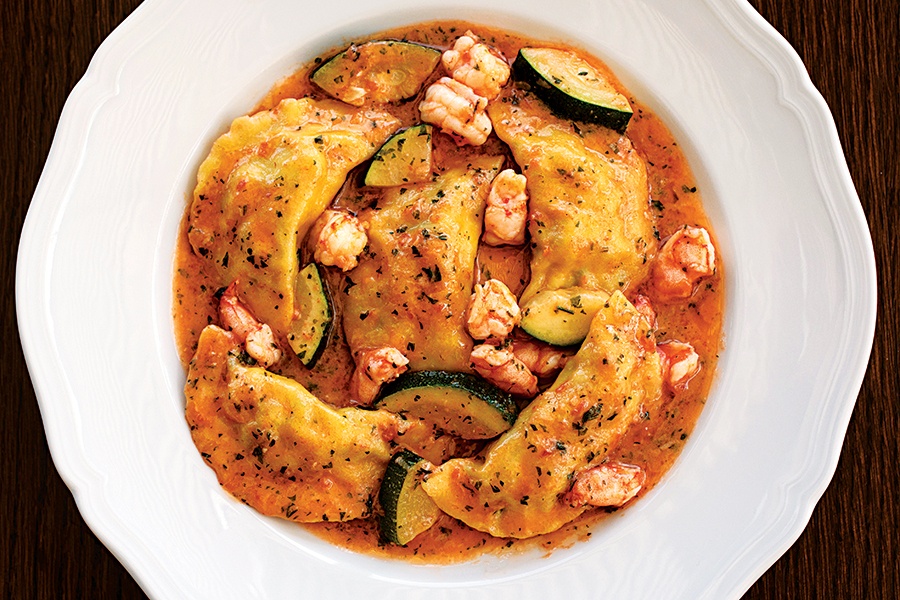 All in all, though, the food is terrific. The views are sublime. The wine list—a Nebbiolo nerd’s cherry-toned, vertical-vintage playground—is deep and dreamy. (The cocktails I tried were consistently interesting and complex…and improvable with longer chill-out time in the shaker.) Getting in is a hell of a headache, but I’d be lying if I said there wasn’t a certain masochistic enjoyment in choosing the right down-for-it co-conspirator, leveraging the chaos, and milking every last drop out of a hard-won perch.

After doing the math, I can say the experience, for me, is worth a few obnoxious hoops. Frankly, in my opinion, there hasn’t been a ton of Italian food in Boston as good as the Italian food at Contessa. I’m not necessarily saying it’s better than what you’ll find on a good night at Coppa, SRV, Giulia, or Fox & the Knife. But strictly in terms of tongue-meets-fork satisfaction—all the fat and salt and piping-hotness in all the right registers—Contessa is hard to beat. It’s a title fight, anyway, I’d be more pumped to watch than wager on.