No One Asked for New England Patriots Potato Chips Grown with Soil from Gillette Stadium, but Here They Are 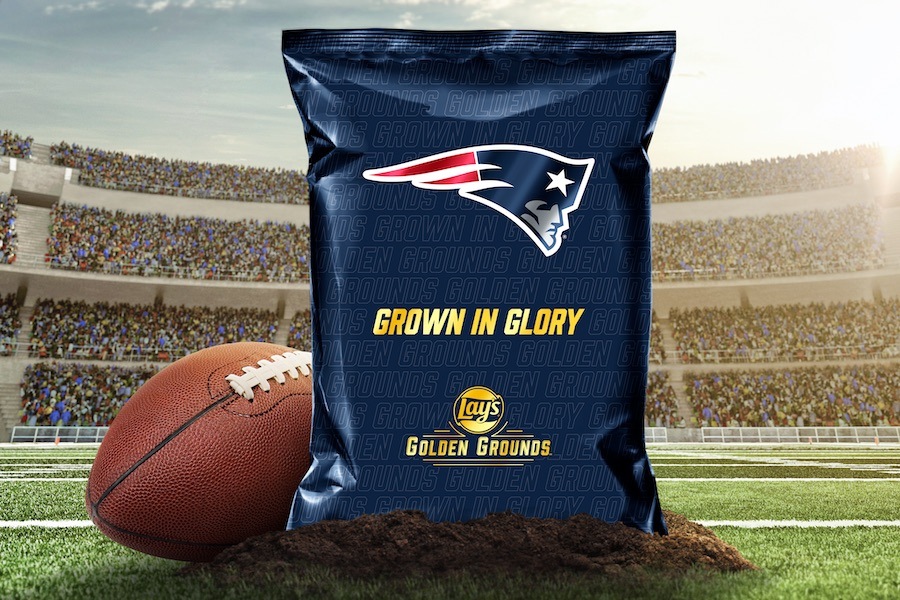 Terroir is a word typically bandied about in the wine world, where it is used to describe the distinctive taste imparted to each bottle by the specific soil and climate in which its wine grapes were grown. That’s a fancy way of saying, “the flavor of the dirt.”

Well, pop open a bottle of something leathery-like-a-pigskin to pair with potato chips—yes, potato chips—that boast their own unique terroir, too: Lay’s brand has just released bags of crispy, bite-sized taters grown using soil from famous football fields around the country, including Gillette Stadium. That means if you’re lucky (and attentive to Twitter-based promotional sweepstakes), you might snag a bag of New England Patriots potato chips that taste like [smacks lips]—salt and a hint of six shiny championship rings, perhaps?

Okay, actually, they taste like ordinary Lay’s potato chips. (The shovelfuls of Gillette soil were added to a distinct corner of a Frito-Lay potato farm in Texas, per a press release announcing this admittedly gimmicky—but also, one must begrudgingly admit, clever—marketing move.) That said, terroir is also about encapsulating the character of a place, he writes, raising his monocle with a giant foam finger, and a true spud snob would surely detect the grit and glory of the gridiron, not to mention the the jersey sweat of Brady, Mac, and other turf-pounding warriors past and present, with each bite. Finishing notes include the joyful tears of a water boy named Sully.

These Pats potato chips are part of an entire Lay’s series of team- and stadium-specific bags, dubbed Golden Grounds, that are being doled out until Jan. 25. To get them, you’ll need to follow the company on Twitter and respond to their sweepstakes tweets—or compose your own 280-character valentine to football, carbohydrates, and sodium—using the appropriate hashtags, which you can find alongside other rules of the game here. You can also compete to score bags representing the Chicago Bears, Dallas Cowboys, or San Francisco 49ers, among many others. But why would you want to do that? Are you ashamed of where you come from? Call your mother.

Time will tell how the Pats fare in the playoffs, but play your tweeting-game right, and your game-day watch parties will at least have a snack made from hallowed grounds to lay on your tongue like some kind of Sunday Football eucharist, should you need to pray for a Hail Mary pass. Now pass the wine and Buffalo dip, please.