Will Expanded Outdoor Dining Return to the North End This Year? It’s Too Soon to Say

Patios will make a comeback in Boston on April 1, but one neighborhood's future is uncertain. 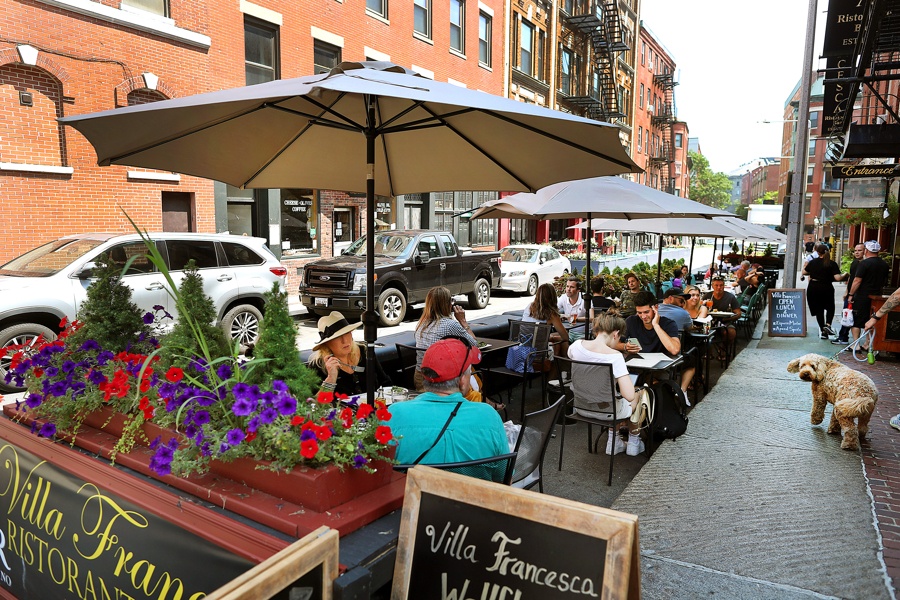 As the city embraced outdoor dining these past two years, it was one of the pandemic’s rare win-win-win cases. Even the most at-risk diners could enjoy a night out without feeling like they were putting themselves or loved ones in danger. Restaurants could expand their footprint beyond their dining rooms, giving them a revenue boost when they needed it most. And basically everyone can agree that eating a nice meal out in the summer breeze is an unbeatable way to spend an evening.

Everyone, that is, except for a frustrated, and very vocal, contingent of North Enders, who say this bounty of benefits has come at their expense. They’re fed up with the disruptions this new set-up created in their neighborhood, and want the city’s outdoor dining program to come to an end—at least in their part of the city.

On Thursday, Mayor Michelle Wu announced that for most of Boston, outdoor dining will make its triumphant return on April 1, at which point restaurants across the city can apply for permits to take over parking spaces outside their front doors. But whether the North End will join in on the fun is unclear, and will depend on how an ongoing community hearing process plays out in the coming weeks.

Their complaints are many. Parking, which has never exactly been easy in its narrow, twisting, tourist-packed streets, became even more of a pain in the ass. To hear residents tell it, noisy diners sipping Aperol spritzes added levels of noise and public drunkenness intolerable even for people accustomed to the neighborhood’s festival atmosphere in the warmer months. It’s clear that this massive transformation of the environment has caused a good number of North Enders a lot of stress. And for what it’s worth, cities including Boston really do need to take more seriously the health impacts of stress caused by unwanted noise.

Still, it would be too bad if the city’s experiment with parklets and patios had to come to such an abrupt end in Boston’s most restaurant-packed corner.

Easy for me to say since I don’t live there, but I believe the North End in the Patio Era looked and felt better than ever. The vibe on a summer night down there, with hundreds of people living it up by the curb in areas once dominated by cars, was electric. With very few exceptions, swapping out cars for people in public spaces is basically always an improvement, whatever the costs, and we should do more of it wherever possible. It would be a shame if the city couldn’t find a way to make the program work in a way that feels more livable for the residents over there.

In the meantime, neighborhoods that are welcoming outdoor dining this spring can expect some changes this year. Per this week’s announcement, new city guidelines will include a 10 p.m. curfew on patios from Sunday-Thursday, and an 11 p.m. curfew Friday and Saturday, as well as new insurance and safety requirements. Restaurants can register for the program here.