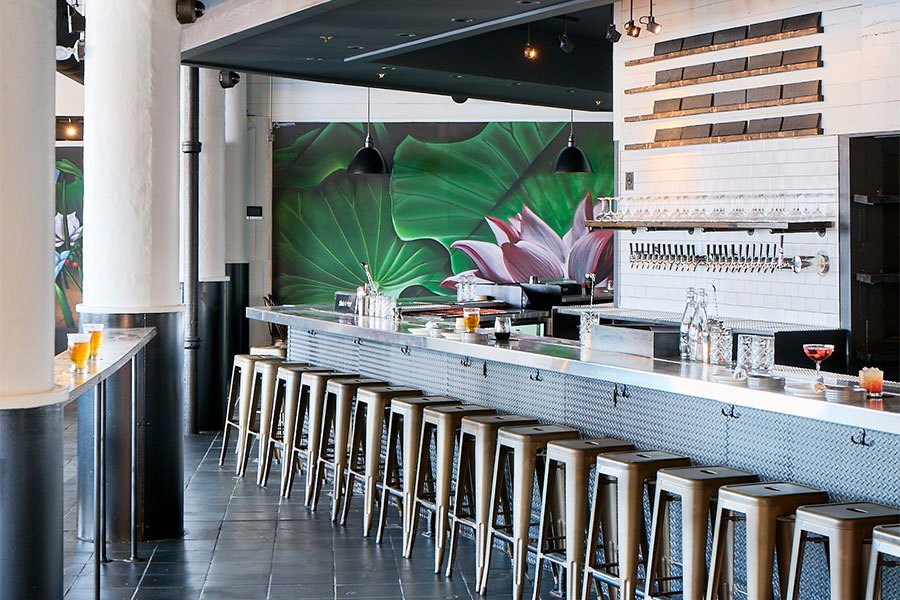 Boston BeerWorks, a now-defunct chain that brewed its own beer on-site, introduced its first location in 1992—just a few years after Sam Adams and Harpoon breweries introduced the idea of “craft” to beer fans throughout Boston. For nearly 30 years, the original location in Kenmore Square was a popular spot for legions of sports fans and beer drinkers alike—populations which often overlap—for a full-spectrum selection of brews and rib-sticking fare such as burgers, chicken wings, and bacon-topped everything.

Now, this bustling beer hall will be reborn as Boston’s largest plant-based restaurant. PlantPub is about to open its second location where the ballpark meets Brookline Avenue. The 250-seat bar and restaurant builds on the tiny, counter-service Cambridge original with nearly eight times the seating, including semi-private dining areas. Along with some new menu items like a plant-based version of a Fenway frank, the latest PlantPub location also boasts a full bar with cocktails, draft beer, and wine. (Only packaged beverages are available at the Kendall Square outpost.)

You may be thinking, vegan cuisine doesn’t usually lead the pre-game lineup. That’s exactly why the partners behind PlantPub sought out this prime location, says cofounder Pat McAuley. With house-made dairy- and meat-free renditions of burgers, chicken sandwiches, nachos, pizza, and more craveable comfort food by acclaimed chef Mary Dumont, formerly of fine-dining restaurants Cultivar and Harvest, PlantPub aims to make plant-based eating “approachable to the everyman,” McAuley says. “So, you have to go where those people are.”

McAuley’s company, which includes investor Sebastiano Cossia Castiglioni and chef Dumont, was clearly onto something: PlantPub was scoping out the former Fenway BeerWorks location around the same time as Matthew Kenney Cuisine, a California-based restaurant group that’s behind Boston’s Double Zero pizzeria and Plant City in Providence, among other vegan concepts. Sharing similar views on how to redefine a classic pub in ways both healthier for consumers and the planet, Matthew Kenney Cuisine and PlantPub partnered with the goal of adding multiple locations of the Boston-based brand across the city and beyond.

The idea is to offer a place for beer-soaked revelry that is more sustainable. In that same vein, renovations to the Fenway-area beer hall were fairly minimal, McAuley explains. The brewing equipment is gone from the space, of course, but the PlantPub partners maintained and updated its existing bar, draft system, and even the tables. The industrial-designed space got a fresh coat of black paint and new white subway tiles behind its multiple bars, plus fresh and colorful murals by local artist Brand Rockwell. “We tried to refurbish as much as we possibly could to reduce the amount of waste that we created in the process,” McAuley says.

That said, the kitchen got a substantial upgrade, including new grills and fryers, to prevent any possible cross-contamination from decades of serving up animal products. “It’s super exciting to be in a space like this because we can really have the impact that we want to create with PlantPub,” McAuley says.

McAuley is a vegan evangelist and author of the book, Eat Green Make Green, which has led to a podcast of the same name and speaking engagements, including a TED Talk. He’s a former college football player and current triathlete who began a plant-based, whole-food diet a few years ago. “I’d always followed that high-protein way of eating” that’s advised for athletes, he says, and “I was a very healthy eater and person. But I just wasn’t feeling good and I wanted to try something new.” He began by replacing his usual breakfast of eggs with a green smoothie. Six months into a vegan diet, McAuley says he was able to put away the inhaler he had used since childhood for allergies and asthma symptoms, and felt relief from arthritic joints he’d had since college. “I was kind of shocked by the whole experience,” he says, which is “why I became very passionate about plant-based food.”

He was working at Weymouth’s Barrel House Z brewery when he went vegan, and he loved the community around it. Taprooms are “one of the only places I’ve seen in hospitality where the 21-year-old hip kid trying the newest IPA is sitting right next to the family of five with their dog, who’s sitting right next to the 60-year-old blue collar guy who comes in after his shift,” McAuley says. “There are stigmas associated with the words ‘vegan’ and ‘plant-based,’” he continues. He wanted to take that same welcoming environment of breweries and apply it to an entirely plant-based experience.

That’s why PlantPub uses familiar language on its menus, which feature chili queso fries, burgers with cheese, a classic Caesar salad, pepperoni pizza, and the new Fenway-inspired hot dog. “We want people to feel comfortable ordering,” even if it’s their first time at a vegan restaurant, McAuley says. “We also feel like, it’s 2022. The way we eat is changing. There are burgers made from plants now; there are chicken patties made from plants.”

PlantPub uses Impossible plant-based ground meat, and also makes signature veggie patties in-house. “Chicken” on its menu describes a protein made from marinated tofu. When customers want to know more about what’s on the menu, the staff is trained to explain. “We’re transparent when people ask,” McAuley says.

After all, at PlantPub, it’s all about demystifying and popularizing vegan food—and giving Bostonians a familiar, yet totally new, kind of place to kick back. 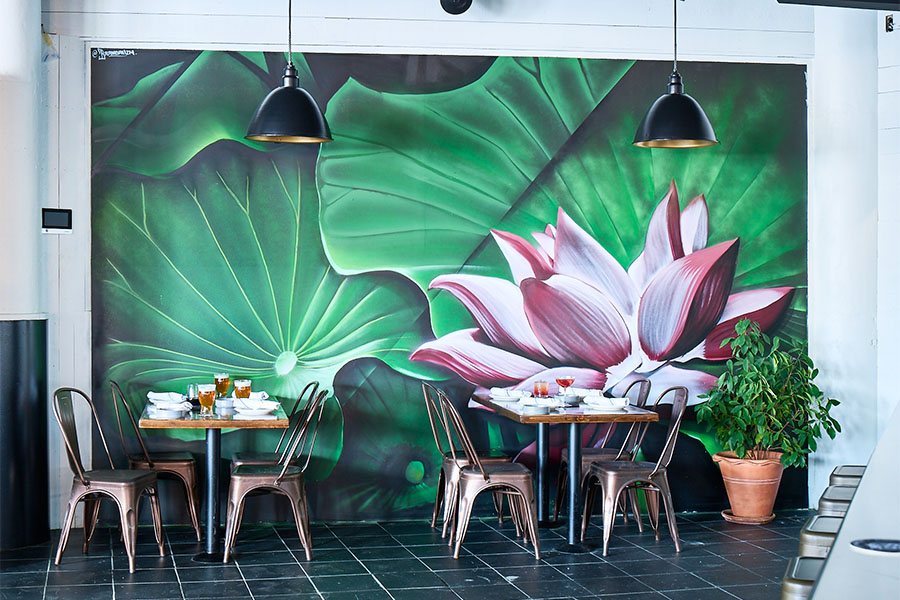 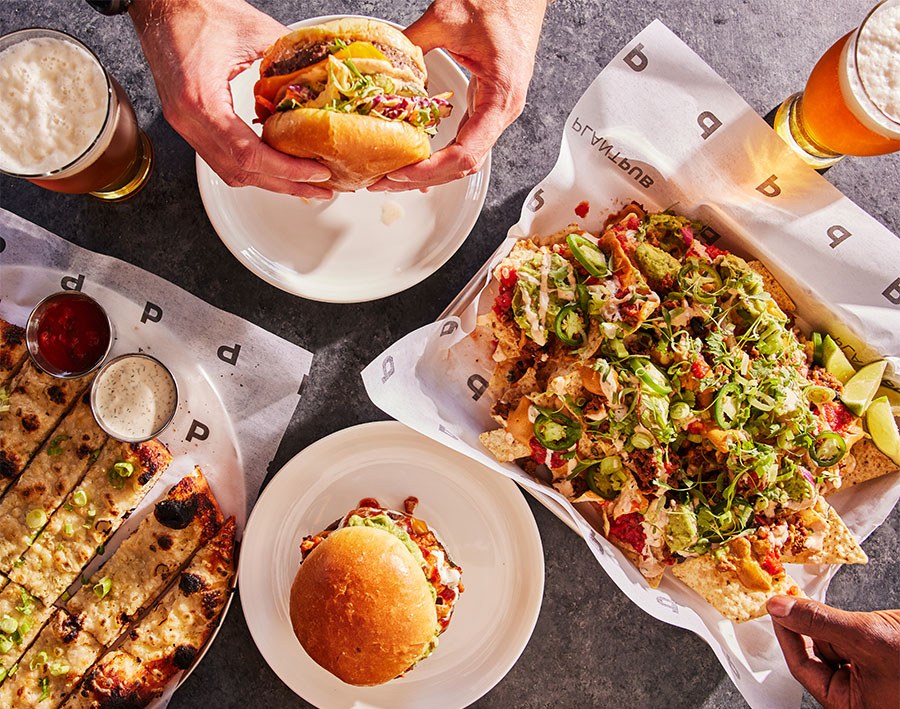 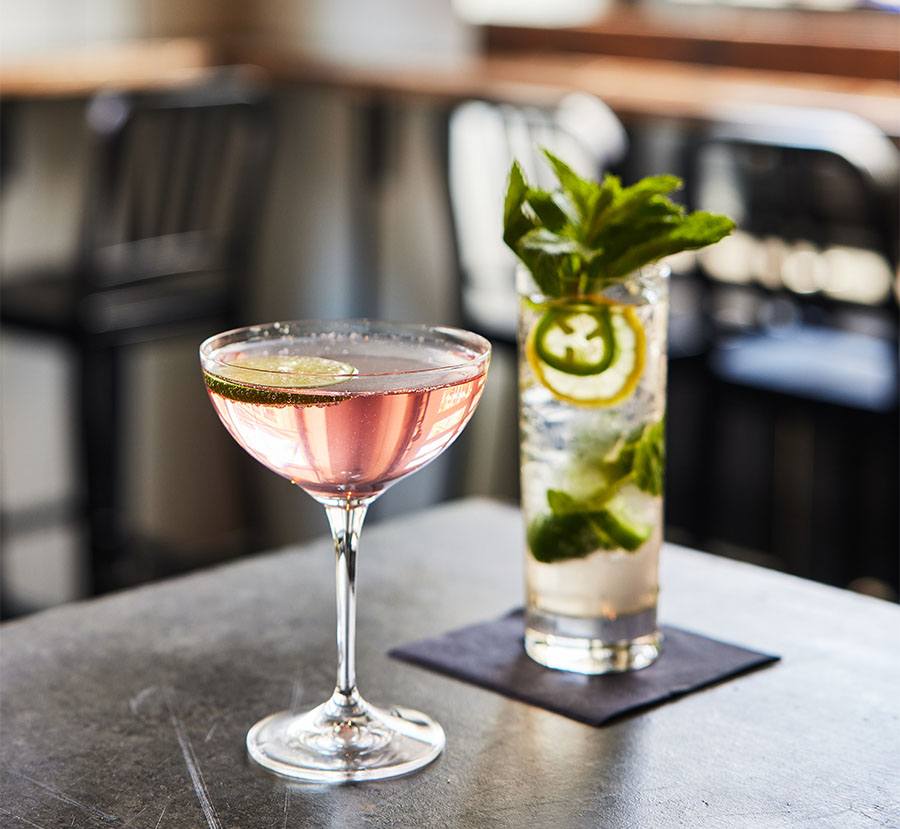 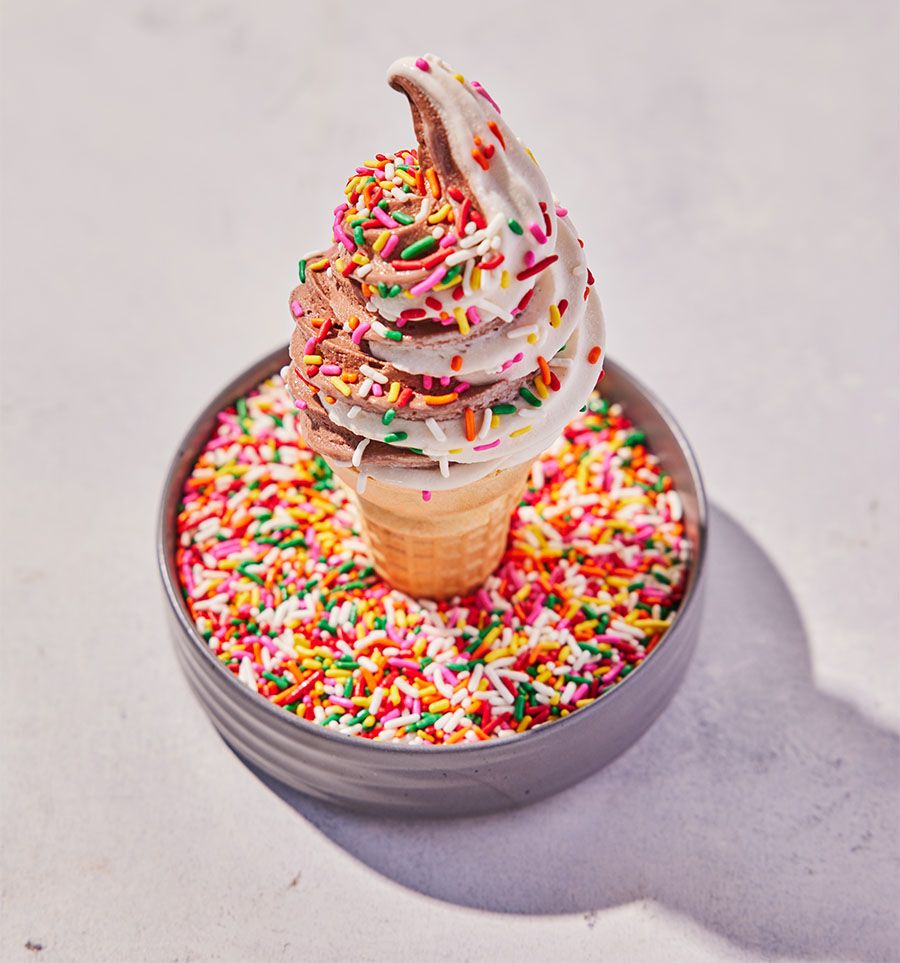 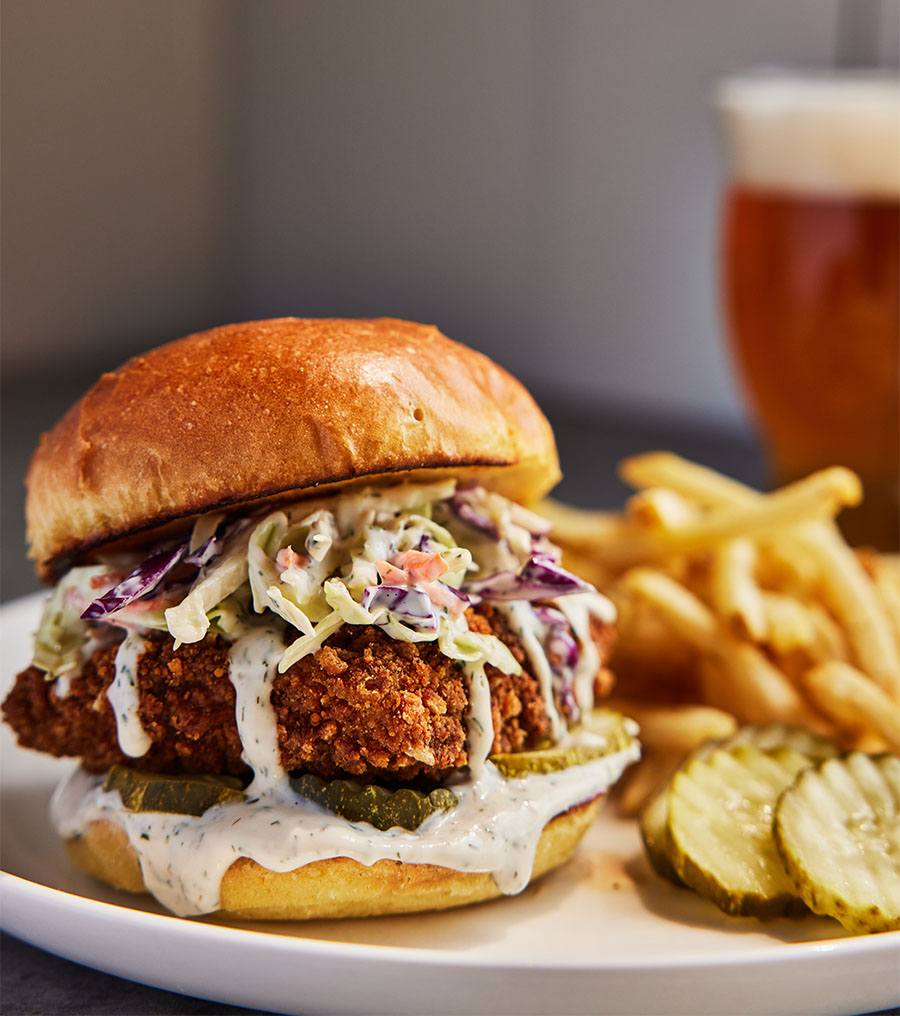 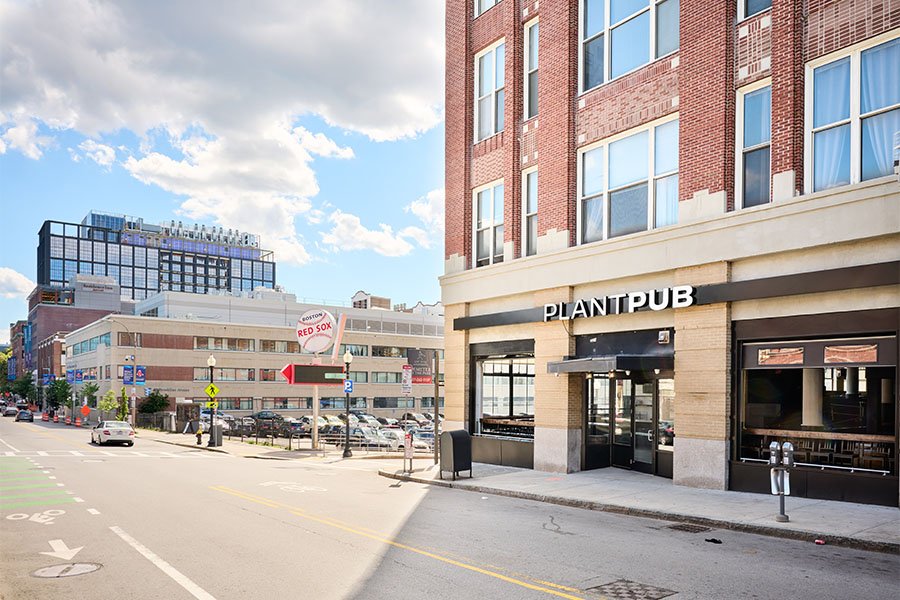