The wine bar, grocer, and patio at the Charles River Speedway showcases empanadas and South American sauces like you’ve never seen them before. 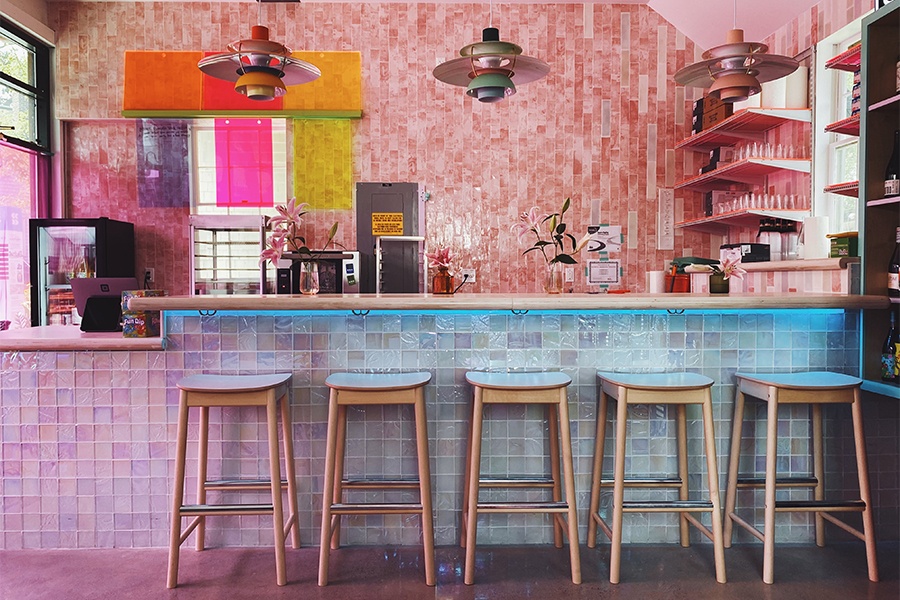 We’re truly hoping, for your sake, dear readers, that you’ve tried a Buenas empanada by now. But for anyone who might need an introduction: Inspired by the 1990s childhoods of its first-generation co-founders in Miami, Buenas is a brand of delicious South American snacks and sauces that launched as a pop-up in Boston in 2017. These empanadas are like none other: buttery, homemade dough filled with flavors like “chicken, bacon, Cool Ranch” and broccoli cheddar soup. They’re baked and either frozen for reheating at home, or kept warm to grab from Buenas’ stall at Bow Market. No matter where you try one, the eating experience is always comforting and familiar, yet bonkers-cross-cultural at the same time.

These are not traditional empanadas, we’re obligated to say now, nor is Buenas a traditional wholesale company. Which is why the evolution of the brand is all the more exciting: Enter the iridescent-pink, natural wine-filled “Buenas aisle” at Super Bien, a “grocery bar” and patio that opens this weekend at the Charles River Speedway.

Melissa Stefanini, Buenas co-founder and Super Bien owner, compares the two concepts to a house brand, “like Kirkland is to Costco, or if Goya was cool enough to have a wine bar,” she says. “It’s like a completely new wholesale location for [Buenas products], that just happens to be my wine bar.”

To that end, the grocery section of Super Bien is stocked with all the Buenas originals, from frozen empanadas to jars of the cult-favorite chimichurri and pebre table sauces. The shop also gives Stefanini’s kitchen team, who work out of a commissary in Everett, the chance to introduce newer products for retail sale, such as an adobo seasoning blend, bags of crunchy empanada chips, and (soon) a jarred version of Spicy Golf—a creamy, zesty, mustard-based dip that’s great on seafood.

Super Bien will also offer a lineup of ready-to-eat options for folks looking to sit at the wine bar or bring takeout to other Speedway destinations, like Notch Brewing and the Koji Club. Expect dips with empanada chips, pasta salad made with chimichurri, and other deli-style salads. “The whole point of the space is to show the versatility of the product line, so we will keep creating different dishes with different Buenas products,” Stefanini says. Super Bien will also continue Buenas’ partnership with La Flaneteria, a flan by-the-slice outfit from local hospitality pro Vanessa Yip, though they won’t be on shelves for opening weekend. Stefanini hopes to bring in guest chefs for special events in the future, too.

Stefanini is also working on a couple “very Argentinian” Buenas products with the Modern Butcher in Newburyport, a destination-worthy meat market. She’s not ready to divulge the specifics there just yet, but meat-loving omnivores will want to stay tuned for a collaboration between the two companies.

The wine selection has a distinctive point of view, as well. Maia Fleming, former wine director at Bow Market wine bar Rebel Rebel, curated the lineup of all natural wines from South America, many of which (like a savory orange wine from the Itata Valley in Chile) are pouring in Boston for the first time. For the first several months—at least until the state’s emergency authorization for takeout beer, wine and cocktails expires, as it’s currently slated to in early 2023—Super Bien is also able to sell full bottles of wine to-go. “We are trying to bring attention to the fact that there’s a lot more to South America than just what you first picture in your head, and the wine list more than starts to do that,” Stefanini says.

The décor at Super Bien may also challenge people’s preconceived notions. “The inspiration was definitely [Miami], where I’m from, but I don’t know if [that’s what] necessarily comes to everyone’s mind,” she says. There are no crystal chandeliers, she says with a laugh, but there is plenty of sparkle. Pearly subway tiles vertically line the walls and the front of the bar, making it the focal point of the space. Other elements are left purposefully rough around the edges, such as the wine shelf made by Frank Criscione of American Handcraft that has one pink-painted pegleg. “That is totally a flamingo leg,” Stefanini says.

As for other design touches, she collected furniture and funky signage from Brimfield’s famous flea markets, including the 1970s lounge chairs and astroturf rug for a covered side patio that “gives pool party vibes.” Three tables in front of the place have more of a European bistro feel. Overall, Super Bien has about a dozen seats inside and 18 between the two outdoor areas.

This weekend is a celebratory opening of the doors at Super Bien, which joins Hummus v’ Hummus, Tipping Cow Ice Cream, Notch, the Koji Club, and non-food-and-drink-serving residents of the Speedway, including Bellwether Salon and the House of Art and Craft. Beginning Wednesday, August 10, the grocery bar will be open Wednesday through Saturday from 11 a.m. until 11 p.m., and Sundays from 11 a.m. until about 8 p.m.

For now, though, Stefanini is simply excited to add to the Speedway’s food options. “It feels like people are pumped for us to open,” she says, and join the diverse collection of businesses. “You can feel like you went so far, and you just walked across the courtyard.” 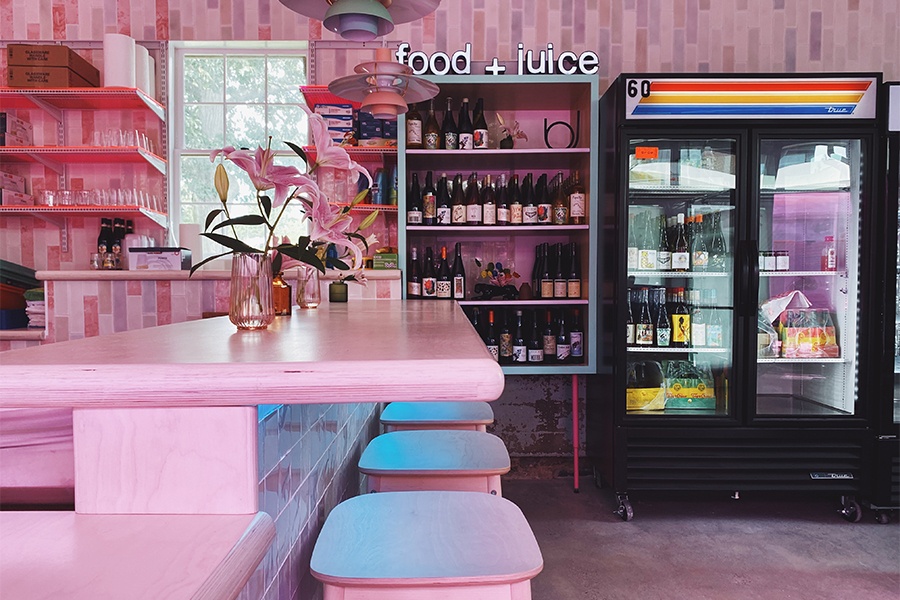 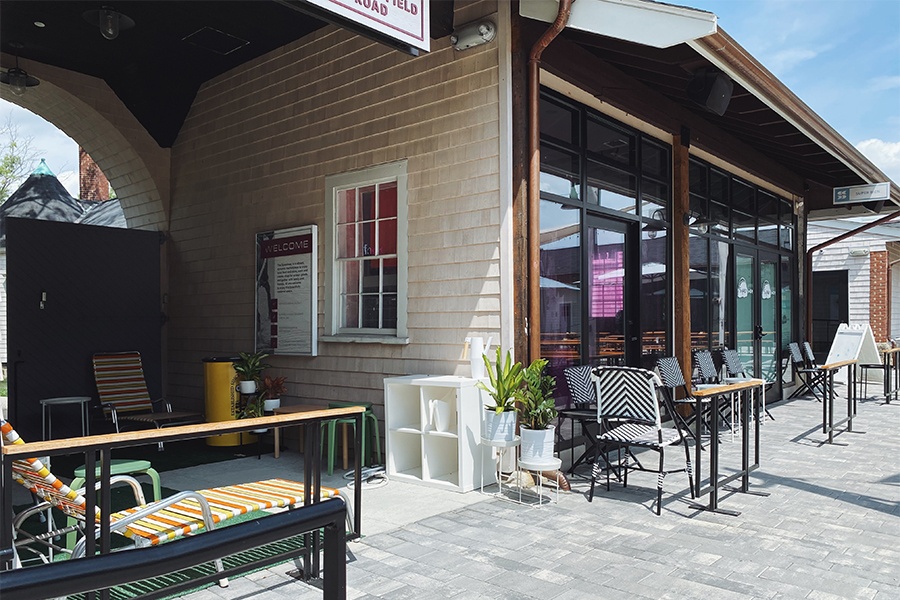