How to Find Vegan Food in Five Non-Vegan Locations

Need a plant-based meal in a pinch? Here’s where to find vegan food in non-vegan places. 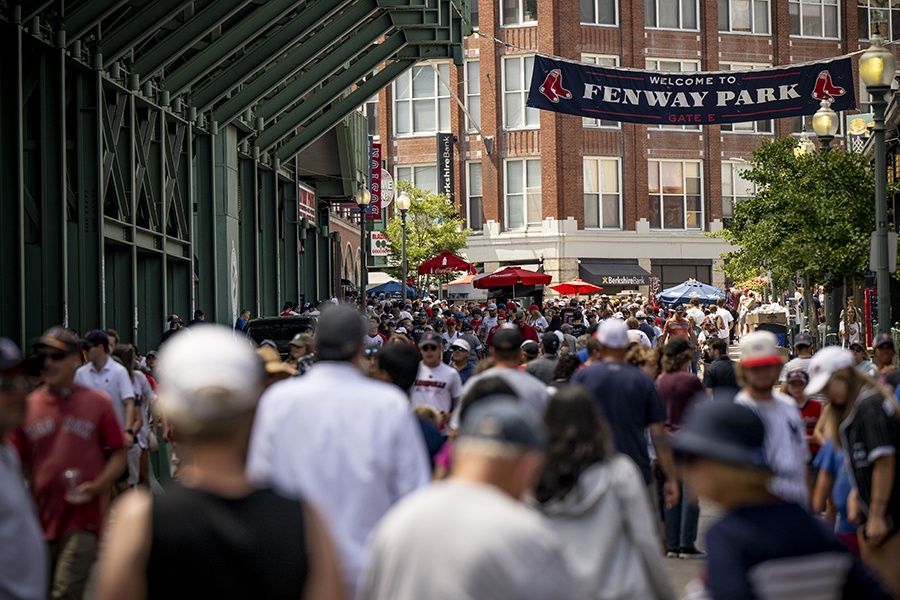 The historic ballpark has come a long way in its plant-based offerings. In addition to homemade guac, salads, pretzels, peanuts, and French fries cooked in designated fryolators, the latest vegan menu item is Mings-Bings. The brainchild of well-known Boston chef Ming Tsai, these traditional Chinese pockets—stuffed with “cheeseburger” or veg sausage and pepper—are now sold at multiple spots throughout the venue. Need to satisfy a hunger pang on the way out? Café Landwer in Audubon Circle has some stellar vegan options—including vegan shawarma on freshly baked focaccia.

While the options aren’t plentiful, plant-based meals can be found at the airport. The two B.Good restaurants (in Terminals A and B) offer a variety of veg burgers and bowls (you just need to omit the cheese), as well as a hearty vegan taco salad. Terminal C, meanwhile, has a Wahlburgers, which carries an Impossible burger, and there is a Mother Juice in Logan’s Boston Public Market outpost. Need a snack with your coffee? Several airport Dunkin’ Donuts carry hummus-and-tomato toast and avocado toast, both of which are vegan.

The stadium itself serves up various vegan bites, from veggie dogs, burgers, and wraps to a falafel bowl. For even more options, though, you’ll want to make a pit stop at Patriot Place, where you can tuck into a vegan fajita burrito at Achilito’s Taqueria or a barbecue jack-fruit bowl at Citizen Crust. And if you’re craving something sweet, swing by Menchie’s Frozen Yogurt to sample several vegan sorbet flavors, including pomegranate razz and fudgy chocolate.

If you’re looking for vegan Italian pastries in the North End, good luck (unless you head over to nearby Boston Public Market, where Jennifer Lee’s Bakery has numerous plant-based goodies—including cannolis). But if you’re seeking savory plant-based Italian food, the options are rapidly expanding, with several restaurants adding meatless sections to their menus. At Terramia Ristorante on Salem Street, enjoy the outdoor patio as you dine on innovative salads, vegan ravioli, or porcini-mushroom-and-asparagus risotto with white truffle oil. Also on Salem Street is Antico Forno, which serves a range of vegan dishes.

While it’s not unusual to spot a seafood joint along Quincy Shore Drive, it is unusual for that restaurant to serve exclusively vegan seafood. While Garden Patch by the Sea at Wollaston Beach in Quincy is not completely vegan, its entire seafood menu—from shrimp to crab cakes to lobster rolls (served with the requisite coleslaw)—is plant-based. Besides the delicious food, a major selling point is the large patio overlooking the water.