Hot Chix is opening soon in Inman Square with a larger menu, more local partnerships, and a home base for future culinary concepts. 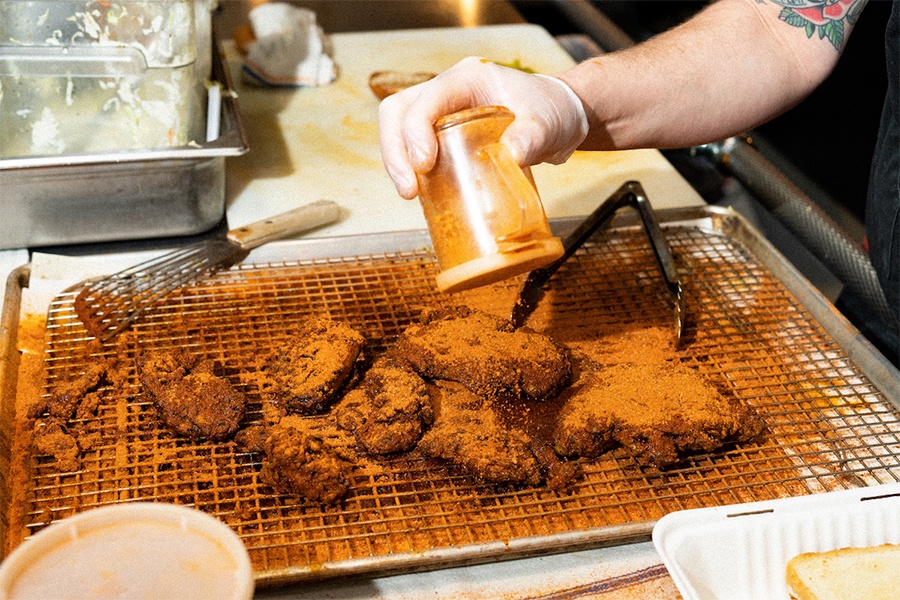 Update: Hot Chix will open on Friday, September 9, at 4 p.m. The restaurant will be sharing scheduling updates on Instagram.

In recent years, some of Boston’s best restaurants haven’t actually been restaurants at all. As operating a traditional brick-and-mortar business becomes increasingly challenging, chef-led pop-ups at other venues have proliferated. Take Hot Chix, for instance. A frequent flier at area breweries, Hot Chix has a cult following for its Nashville-style fried chicken sandwiches dripping with pickles, ranch, and slaw.

Now, Hot Chix has a home of its own. Debuting soon in Inman Square, the 16-seat, counter-service spot on Cambridge Street is awaiting final sign-off from the City of Cambridge, says co-founder Alex Nystedt. By the end of August, Hot Chix will be open daily for lunch and dinner. 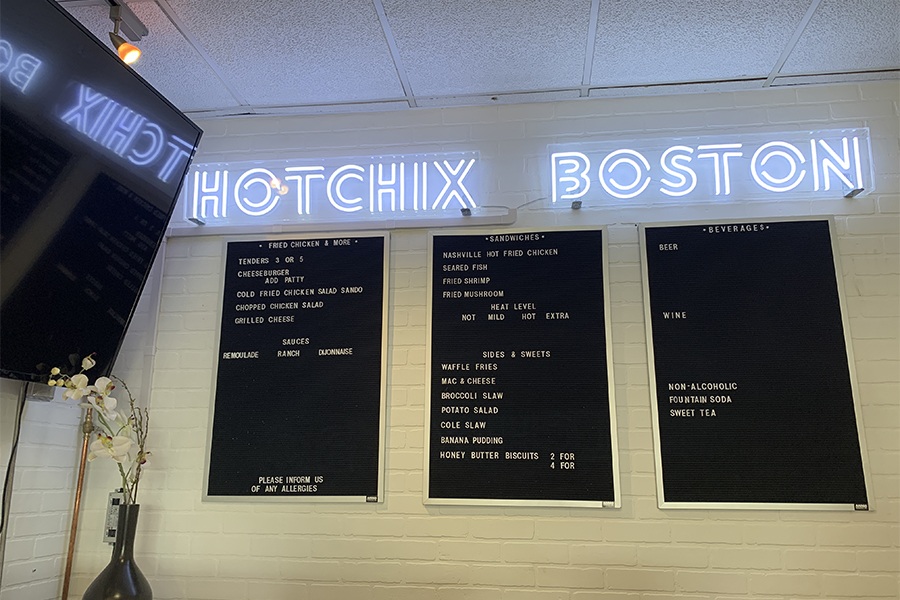 Opening a restaurant is a longtime goal for Nystedt and his business partners, Alex Kim and Will Yoo. It also represents the next phase of pop-up life, which continues this month with Hot Chix appearances at Bone Up Brewing, Widowmaker, and Idle Hands. For one thing, the restaurant has a beer and wine license, and the local breweries that have supported Hot Chix as a pop-up are well-represented among the offerings. Nystedt, a former manager at Sportello and a one-time line cook, is also looking forward to eventually hosting wine-pairing dinners at Hot Chix with special menus.“There’s more in my head than just frying chicken,” Nystedt says, adding that his business partners have additional ideas, too. “Pop-ups have worked for us so far, and now we have a location that we can pop up out of whenever we want to,” he says.

For now, though, it’s time to enjoy the new roost. Hot Chix replaces Guangzhou Restaurant, a 30-year neighborhood mainstay that shuttered during the pandemic. The new owners deep-cleaned the space, added two bathrooms for guests, and installed new signage. The neon Hot Chix logos were custom-made in Toronto, and exterior markings are coming soon from Need Signs Will Paint. The reclaimed wood trim in the restroom hallway was a DIY project, and the gleaming white ordering counter is new. Next to the black-felt letter board menu is a giant TV; Nystedt won’t rule out showing Boston sports, but he anticipates more nostalgic programming, like old-school music videos. 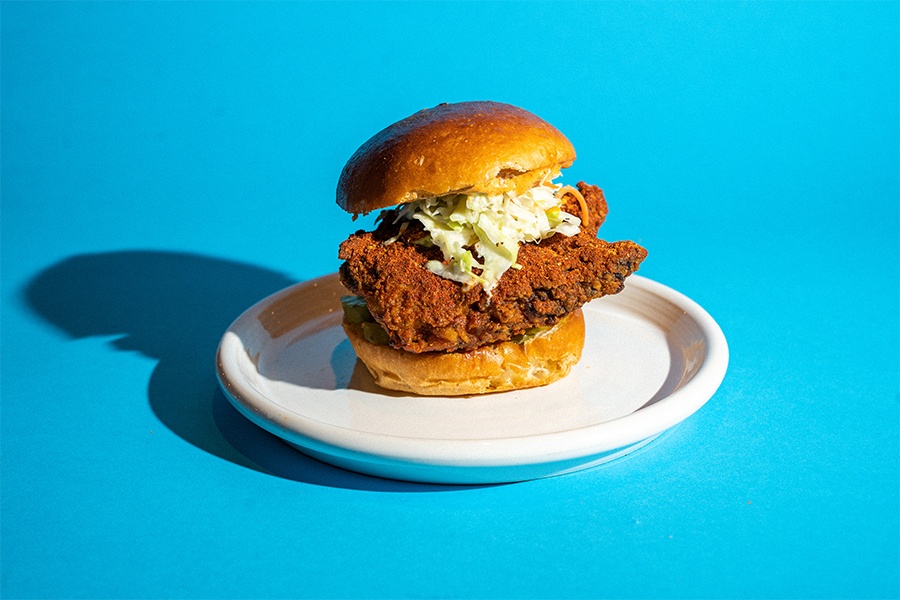 Fun touches prevail elsewhere, too. The team’s landlord, the family behind Guangzhou, left their tenants some kitchen equipment, as well as decorative items in the restaurant including a countertop lucky cat and quirky, vintage trays. A pair of Reebok sneakers hanging from the ceiling, meanwhile, is a relic from one of Hot Chix’s first-ever pop-ups: an event with the footwear company. “We were just like, ‘We know where these are going,’” Nystedt recalls. “We’re gonna hang these in the store.”

It’s a low-frills space to take in a fairly simple menu. Along with the signature hot chicken—which gets its fire from a dip in chili oil as well as an additional dusting of spice—you can order “not,” “mild,” or “extra hot” varieties. New menu items include crispy fried oyster mushrooms as a vegetarian option, dredged and cooked like the chicken with your choice of spice level. Fried shrimp and seared local fish will also be available. A la carte sides including waffle fries, mac and cheese, broccoli slaw, potato salad, coleslaw, and honey-butter biscuits round out the menu, which will also feature banana pudding for dessert. 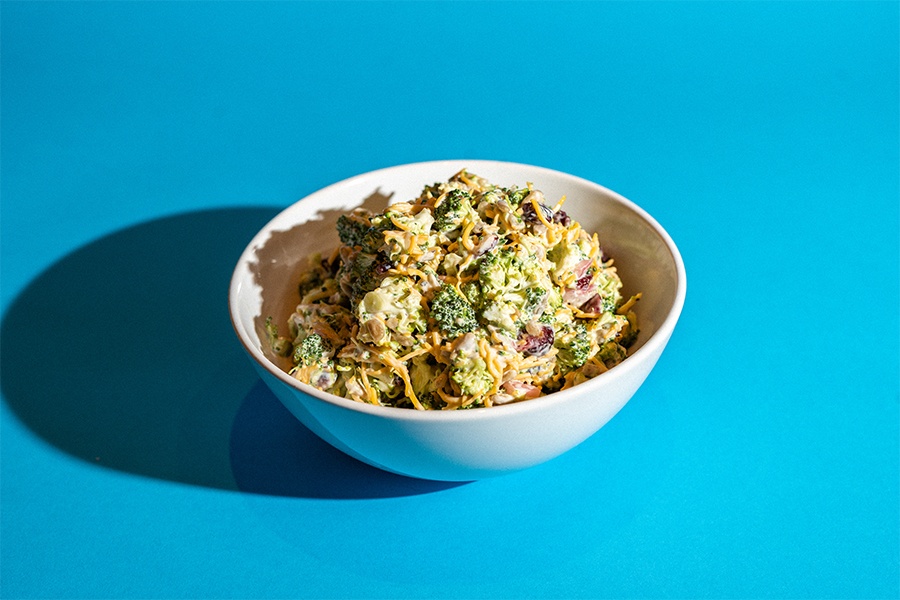 Hot Chix has plans to launch weekend brunch specials shortly after opening, Nystedt adds. “Everybody does chicken and waffles, but I really love the corn cake from Neptune Oyster,” he says, describing the North End restaurant’s iconic Johnnycake with honey butter, Boston smoked bluefish, and sturgeon caviar. “I would love to do something like that with the fried chicken. I always like to do a little tip of the cap to New England when I can,” Nystedt says.

It’s a way to honor the Boston restaurant community, which has been so supportive of Hot Chix thus far. From pop-up hosts to neighbors stopping by to check on the progress of construction, “other small businesses have been super nice,” Nystedt says.

Plus, Inman Square has the right mix of mom-and-pops and is densely populated with plenty of students. “There’s tons going on. It’s like a breath of fresh air,” Nystedt says. The fact that it has walking-distance access to public transportation—even more so once the Green Line is back on track—makes it an ideal location for Hot Chix, but Nystedt says “this location kind of chose us.”

He spoke directly with the owners when he initially called the number on the “for lease” sign. As longtime restaurateurs themselves, his landlords understand what Hot Chix is trying to do, Nystedt says. Other leases Hot Chix looked into, in premium neighborhoods such as Harvard Square and the Seaport, would have required rent levels that “just would not work with what we’re selling,” he says.

That local support has been key, given that Hot Chix has navigated a volatile real estate market, material shortages, and contractor delays since the team signed their lease last year. “It’s been a long journey,” Nystedt says, “but I feel like it’s all been leading me towards this.”

Stay tuned to Hot Chix’s social media for an opening announcement, and to find them at a pop-up in the meantime. 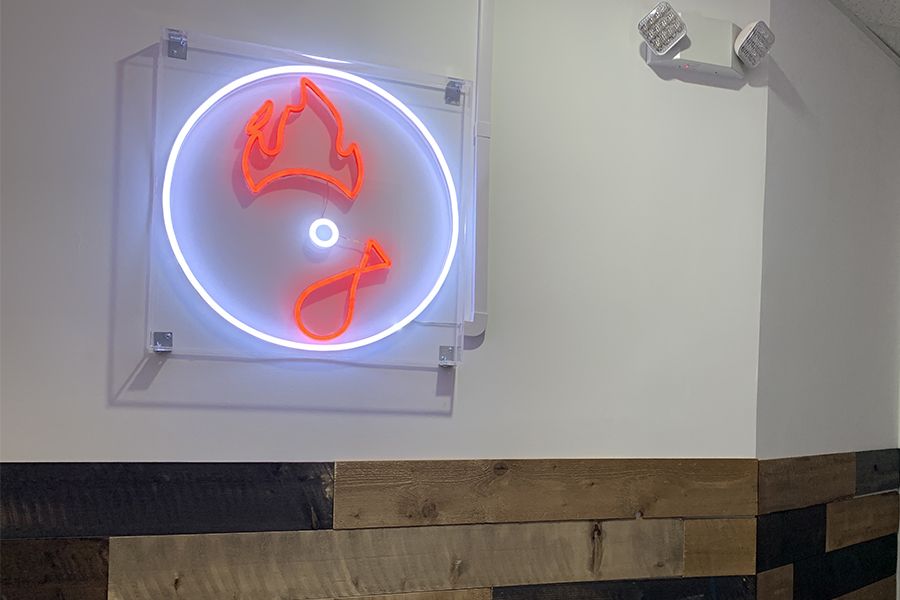