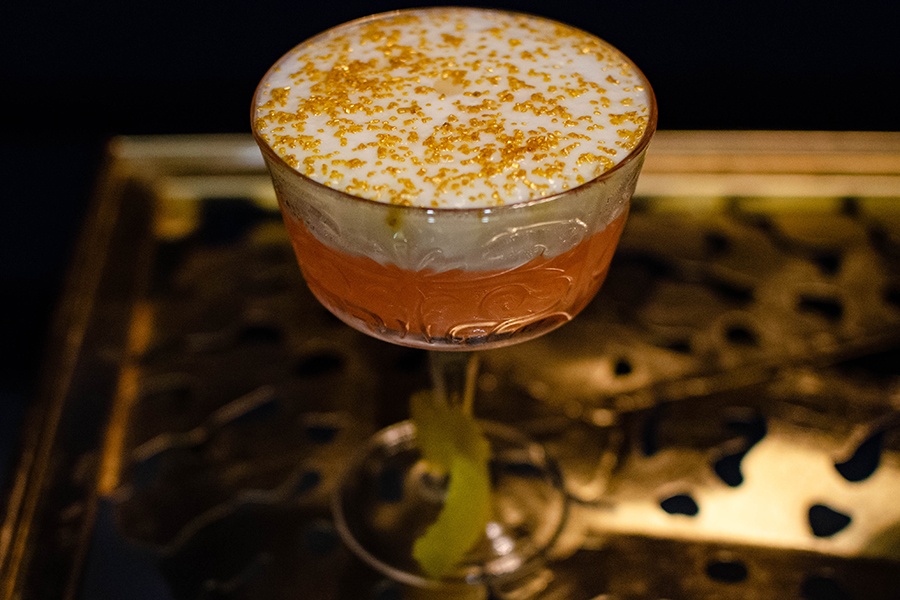 It would be understandable if you wandered into 27 Temple Place in Boston’s Downtown Crossing looking to buy a wig. After all, the space was home to Wig World for decades—and the front window still features the shop’s neon “wigs” sign and a lineup of mannequin heads sporting colorful wigs. That’s really all you can see from the street, which is perhaps unsurprising given that the team behind the brand new cocktail lounge within, the Wig Shop, also runs a hidden steakhouse next door, Bogie’s Place. (And adjacent to that is the group’s less secretive bar and restaurant, JM Curley, a popular downtown destination since opening over a decade ago.)

Now open, the Wig Shop is full of nods to the space’s predecessor—some subtle, some less so. “Obviously hair in food is a big faux pas,” says managing partner Kevin Mabry, “but we’re being as playful with [the theme] as we can.” That means a menu with some hair puns and graphics that look like old wig ads, employees wearing decorative hairpins on their aprons, checks presented with a hair curler (“Don’t forget toupée,” jokes Mabry), a couple of mannequin heads adorned with wigs up on a shelf, and, still in the works, a wall of photographs featuring celebrities in wigs. (And don’t worry, if you’re mourning the loss of Wig World, the shop has moved to new digs over at 681 Washington St. in Chinatown). 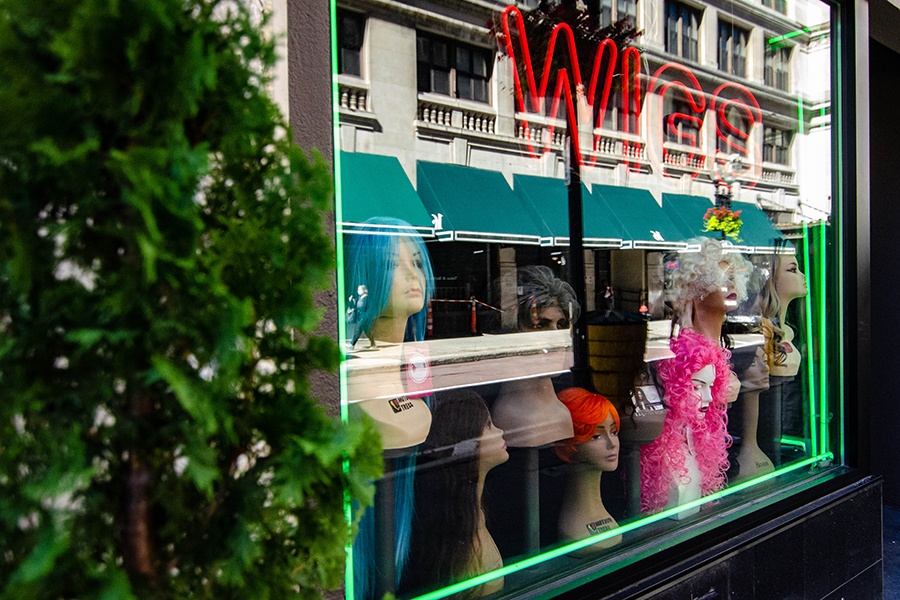 “We wanted to pay an homage to what was a wig shop for more than five decades, and we’ve always tried to be a little different with our concepts,” says owner Babak Bina, “so the idea of keeping the wigs in the window and calling it the Wig Shop, keeping it playful, was the natural thing to do for us.”

While this team knows how to be a little silly, they’re also serious industry veterans who turn out killer cocktails and food, and the space, designed by Boston firm Studio FKIA, feels appropriately glamorous (and “definitely sexy,” says Bina). Dark blue velvet couches with shimmering silver threading make up much of the lounge’s seating (hit up Ernesto Upholstery in East Boston to get your own eye-catching furniture like this), and floor-to-ceiling sheer golden drapes can be secured to the walls or let down to give each group more privacy.

“We really wanted to evoke a sense of elevation,” says Mabry. “If JM Curley is the low-brow, we wanted to go a little bit for the high-brow aspect over here.” 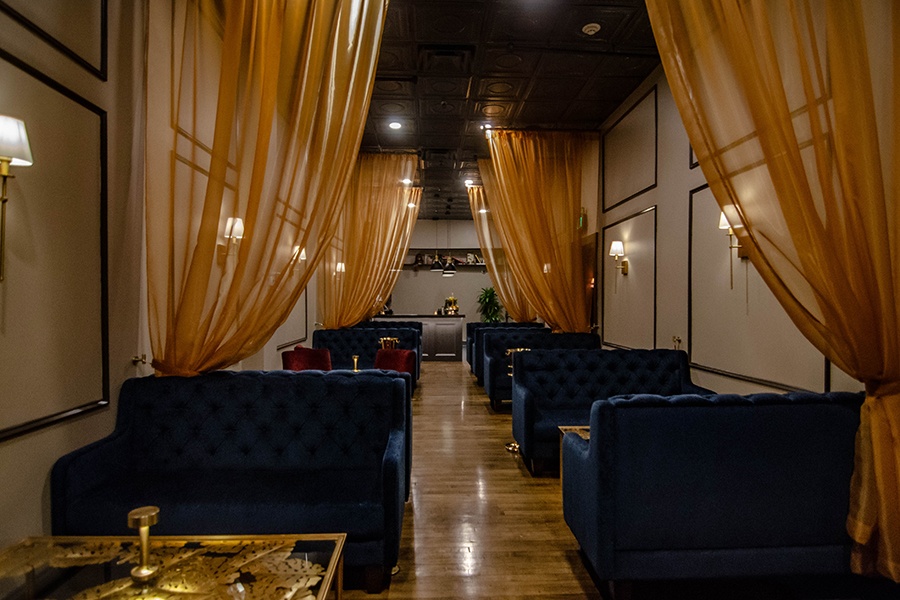 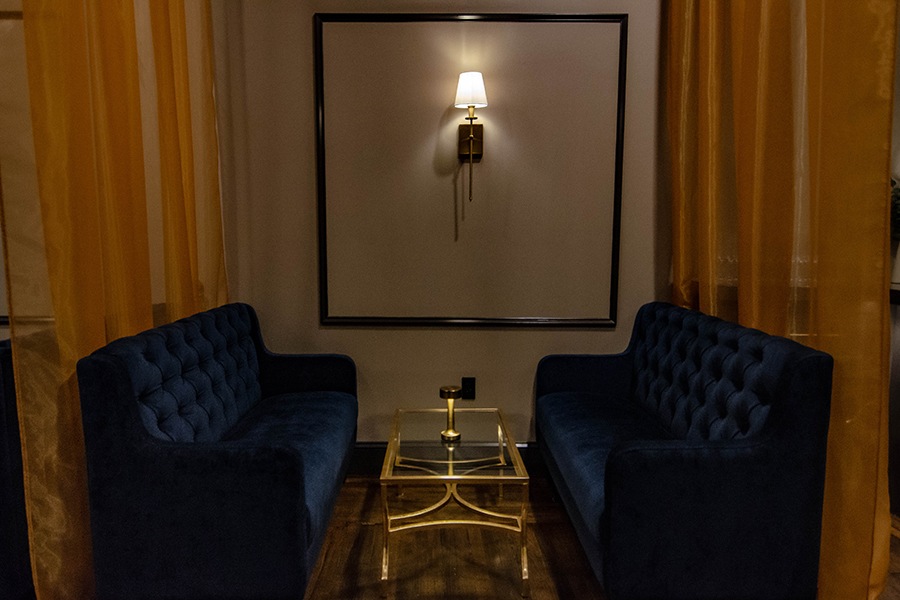 The Wig Shop’s curtains can be let down to create a feeling of privacy for each group. / Photo by Rachel Leah Blumenthal

The Wig Shop’s cocktail list jumps eras from old to new. Expect “old-school retro drinks that are befitting of the era when Wig World first opened,” says Mabry—or, as he puts it, drinks that are “true to our roots.” But you’ll also see plenty of modern cocktails (or “new hairdos”) that are bar manager Oscar Simoza’s interpretations of drinks and ingredients that are meaningful to him.

“I put a lot of my personality into it,” says Simoza, “a lot of things I like, like coffee, cinnamon, things that bring me back to my roots, growing up in Venezuela.” His favorite is the Rise & Grind, which packs a caffeinated punch, combining rum with cold brew coffee, Borghetti (an espresso liqueur), cinnamon-demerara, whipped cream, and sea salt, plus a chocolate-covered pretzel on the side. 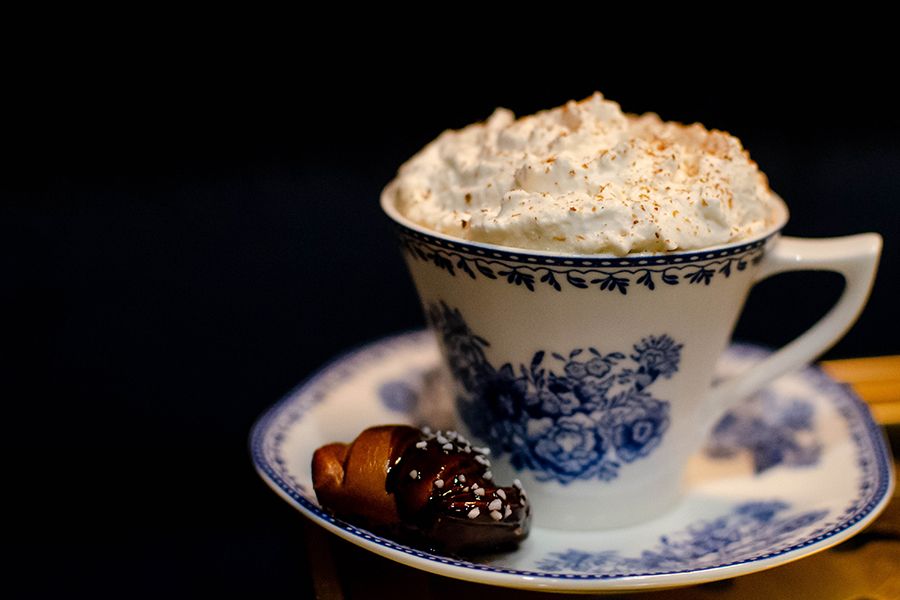 The Wig Shop’s Rise & Grind cocktail—one per customer per visit, due to its high caffeine content—includes rum, cold brew, espresso liqueur, and cinnamon-demerara, with a chocolate-covered pretzel on the side. / Photo by Rachel Leah Blumenthal 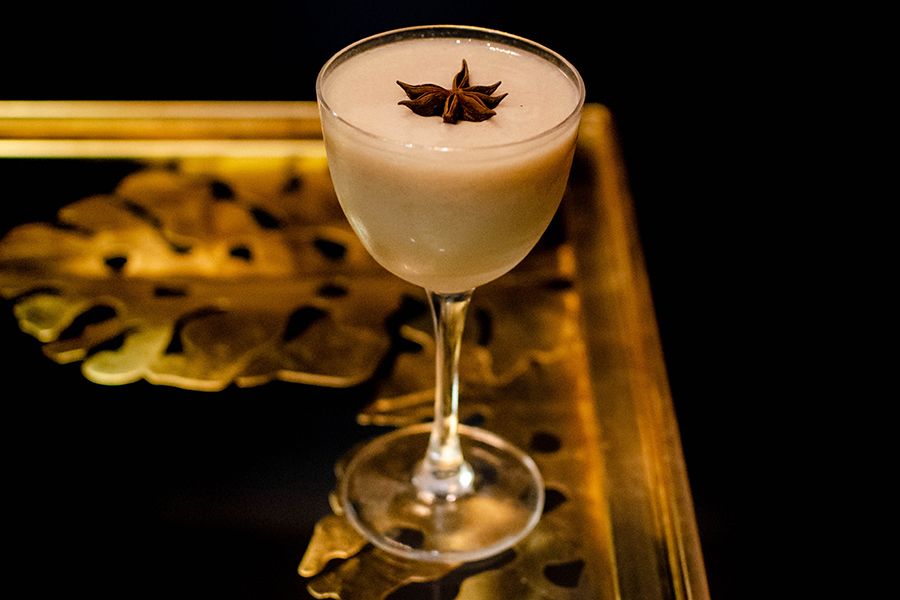 The team is also excited about punch bowls (available for groups of at least four) and perhaps above all else, the Champagne list, which was put together by wine director Nader Asgari-Tari, who is also sommelier at sibling spot Bin 26 Enoteca.

“Being in Downtown Crossing, we don’t have a ton of space, so each single bottle matters; there’s no filler,” says Asgari-Tari. “They’re approachable, and they’re priced so that these bottles get popped. It’s not a museum—it’s supposed to be a convivial space to pop some corks. But if you want to get studious, we have the materials.”

As far as dining goes, the idea was to offer food “that you can pick up with one hand and not have to put down your drink,” says Mabry. To that end, executive chef John Malone is serving items like luxurious pancakes topped with lobster, harissa butter, and tobiko; mini squid ink crepes topped with caviar and salmon roe; pork belly tacos; and more. 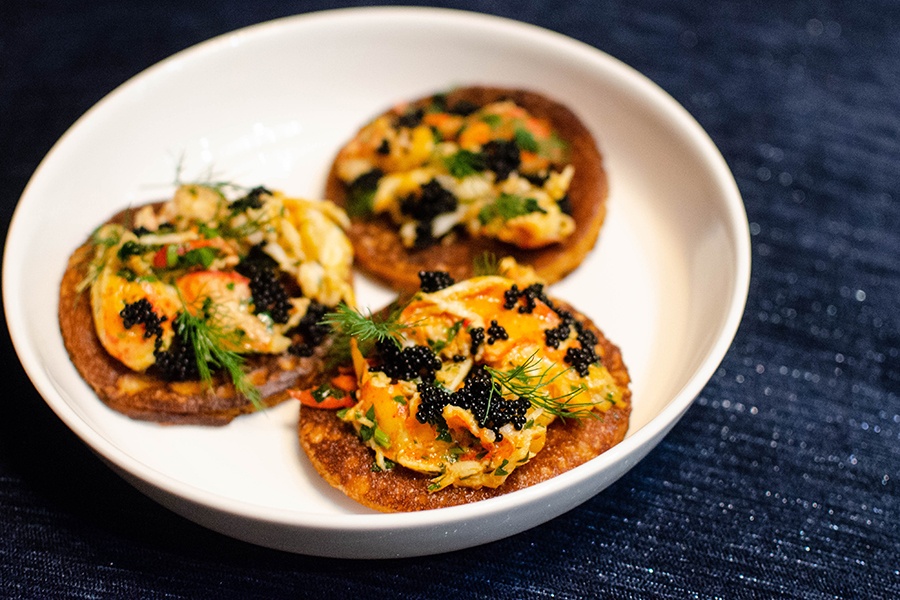 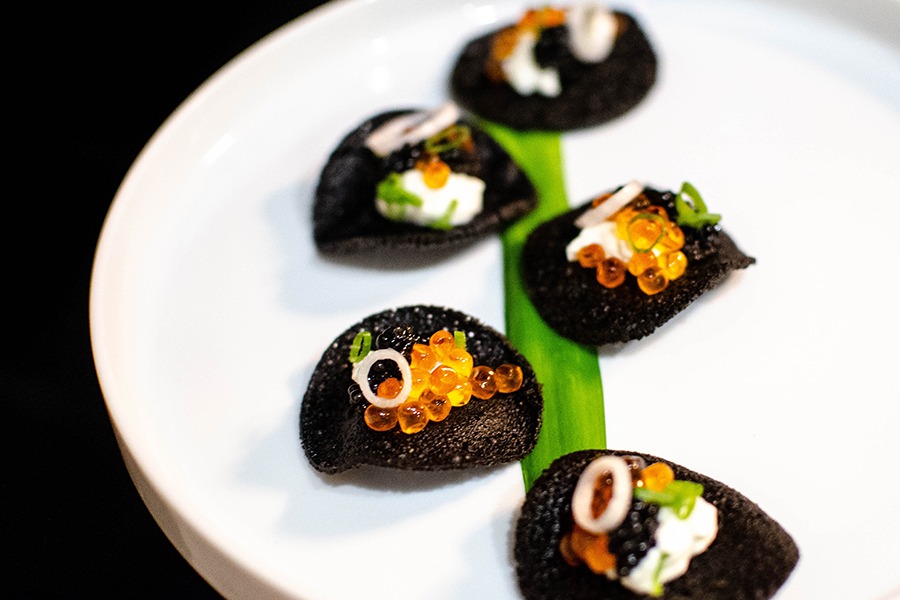 “It is a cocktail lounge, so I geared myself toward what would pair well with the drinks, the Champagne,” says Malone. “I think it’s a pretty unique situation that we have here food-wise, where we have so many different concepts in one building. It’s quite a task, but we’re ready for it. It’s pretty cool that there will be some buzz behind this room, and people who haven’t been to JM Curley in the last year or so will come back and see what we’ve changed. I’m excited to have a new audience all throughout the building.”

So, for those who have the stamina, what would be the perfect three-stop journey through the team’s Temple Place trio? “There are lots of different ways you could go about it,” says Mabry, but here’s one suggested itinerary: “Champagne and caviar crepes at the Wig Shop is a good start to any meal, and then moving into Bogie’s Place, we’ve got the tomahawk steak there with a side of mac and cheese and a bottle of Burgundy, then late-night at Curley’s—a High Life and a fernet, a late-night burger if you’re still hungry.” 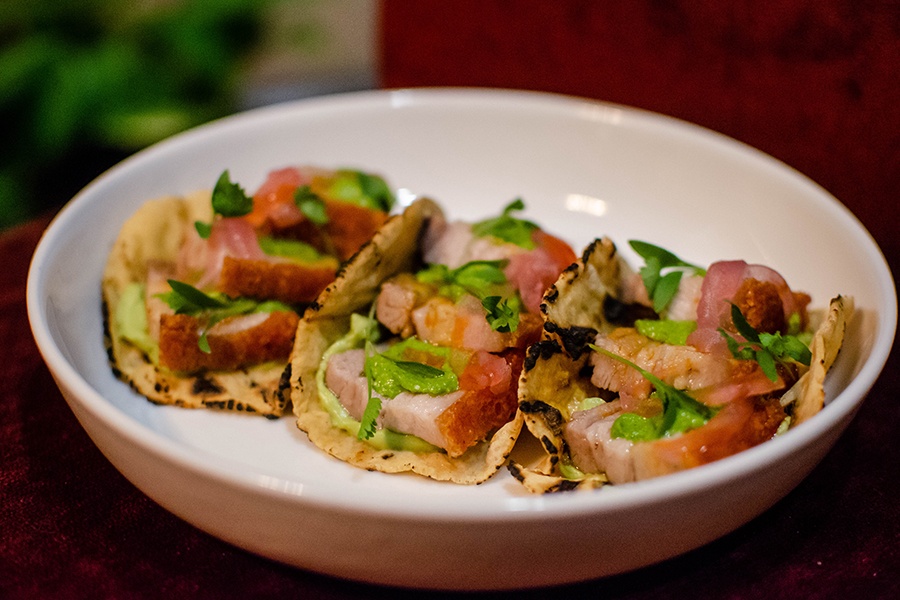 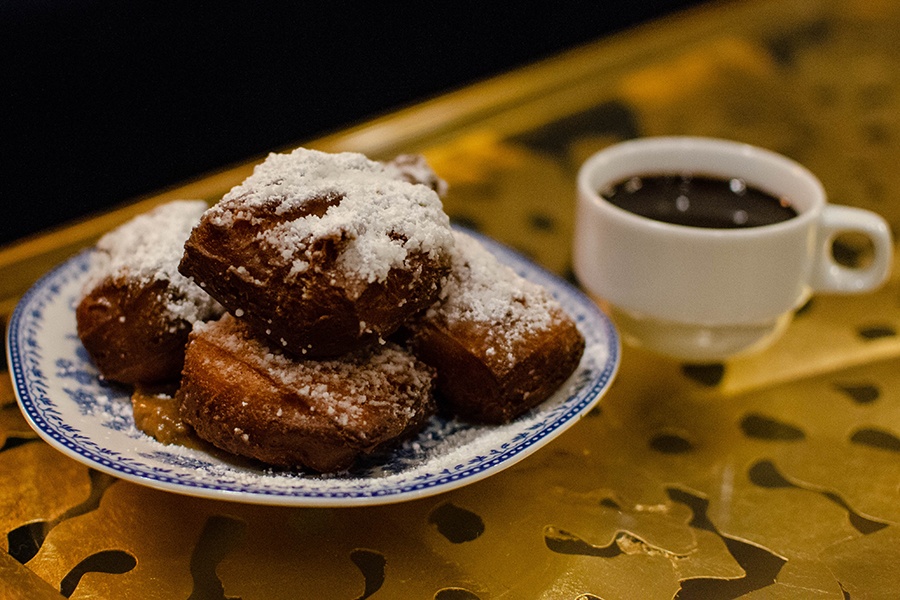 Whichever adventure you choose, the Wig Shop team is just hoping for folks to come in and enjoy themselves. “The past couple years were hard,” says Mabry. “We really wanted to have a space where people can dress up and show out and have some fun again.”

And as for dressing up to fit the setting? “I think we actually highly encourage people to wear wigs if they want to,” laughs Mabry.

The Wig Shop is open daily from 5 p.m. to 2 a.m., with reservations available between 5 and 7 p.m. The kitchen closes at 11 p.m. Check out the menus here.