What does "coastal Italian" mean, anyway? At Ken Oringer and Jamie Bissonnette's Faccia Brutta, it means a lot of things—most of them very, very good. 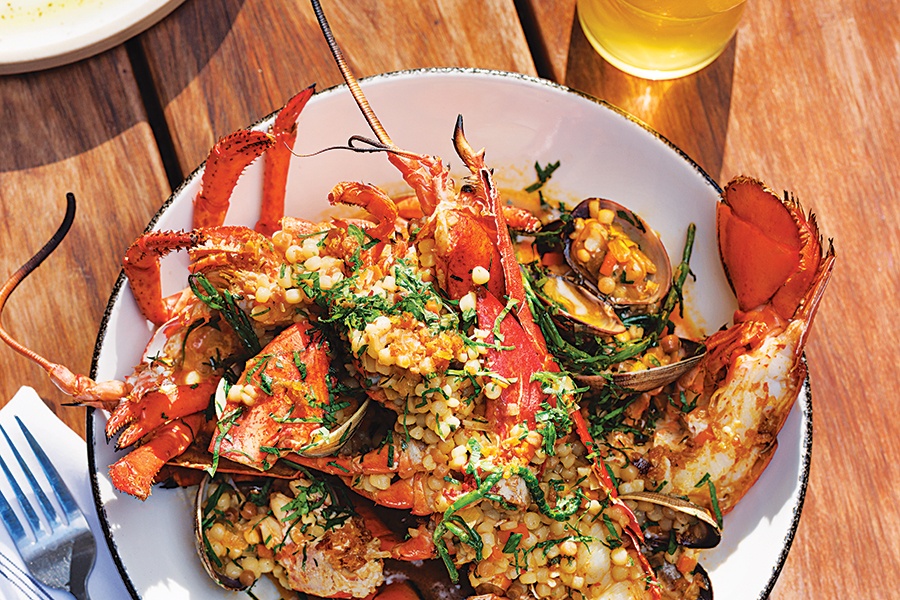 Grilled lobster, from the quaint coastal village of Scituate, with chili-butter-spiked brodo and clams. / Photo by Adam Detour

At Boston, we do stars, but in my dream job, we’d size up restaurants using only Randy Jackson–isms, which I’ve admired since American Idol’s heyday for their sneaky precision and sweep. Bistro with shaky recipes? “A little pitchy for me, dawg.” Half-baked Scampo rip-off? “If you sing Lydia, you gotta bring Lydia.” Meanwhile, you’d keep a hedgy “You could sing the phone book!” handy for a place like Faccia Brutta, Ken Oringer and Jamie Bissonnette’s thrumming patioed brownstone on Newbury. Five meals in, I’m still not certain the shore-hugging barge of tricks they’ve got floating in under the “coastal Italian” ensign is my favorite showcase for this duo’s singular culinary stylings. But if it yields this much showstopping bounty, why quibble over material? You follow the good food where the good food goes.

Faccia Brutta (Italian for “ugly face”) is actually Boston’s second coastal-Italian spot. When Bar Mezzana opened in 2016 with that same tagline, most of us glossed over the “coastal” part, taking it as some breezy declaration of atmospherical intent—come for the pasta, stay for those sweet coast-of-Italy vibes. Now that Faccia Brutta has arrived, doing a similarly sprawling Italian-ish menu with even more Mediterranean flair (harissa, saffron, etc.), it’s all making more sense. Oringer and Bissonnette, with executive chef Brian Rae, bounce around the boot with ecumenical abandon, deftly weaving in pantry staples and dishes culled along the 4,700-mile stretch of coastline from Croatia to Naples to the French Riviera, plus the islands closer to Tunis than Rome—with detours to Phuket and Jalisco—plus a subset of snacky dishes of even murkier provenance. There’s a large-format tossed salad you can buy into for $16 a person dressed with what I can only assume is authentic “creamy Italian”…it’s tasty! There’s a $38 crudité platter that would make Mehmet Oz blanch. There’s a lot of a lot of things.

Happily, when Faccia Brutta nails it, which is usually, the food is terrific—not just the execution but the polish of the recipes. There’s hardly ever a false note or extraneous flourish: not easy to pull off when you’re covering this much comestible ground. Your best opening move is to order a drink—the Negroni and spritz menus are particularly strong—plus a few grazeable snacks to tide you over while you hammer out a game plan. Perhaps hot, crispy Castelvetrano olives ($12) stuffed with pork sausage, anchovy, and red bell pepper, coated with gluten-free breadcrumbs, and dropped onto a cooling shmear of sundried-pepper aioli? Or maybe handkerchief-thin swaths of mortadella ($12), the color of pink-and-white marble, tricked out with toasted pistachios and a splat of gleamy-green basil pesto? The only items I might skip are lukewarm fried mozzarella sticks ($24) crowned with a blob of Ossetra caviar but robbed of their stretchy raison d’être, and potato chips ($22) with a green goddess dressing that pretty much obliterated the caviar that topped it, and, anyway…this concludes my TED Talk on first-world problems.

I don’t know who you like for crudo these days, and Boston has plenty of worthy exemplars, but my fantasy league a few years going has been Lynch (Bar Mezzana), Serpa (Select), Maslow (wherever he’s playing), and Oringer/Bissonnette (equally good at Little Donkey, Coppa, and Toro). Faccia Brutta gamely upholds the duo’s raw-ficionado cred. My favorite was the ruby red prawns ($24): Dressed with minimalist flair—a drizzle of licoricey Thai basil oil, a scattering of diced pickled rhubarb—they had a luxuriously supple texture and a quivering freshness shrimp-head heads will thrill to. That’s called ruthless ingredient management, folks, and I am here for it. The richness and velvety texture of live local scallop ($23) paired gorgeously with shaved black truffle and endive, and black bass crudo dressed in tomato-water aguachile ($18) was a balanced blast of fiery freshness from the shores of…somewhere delicious. 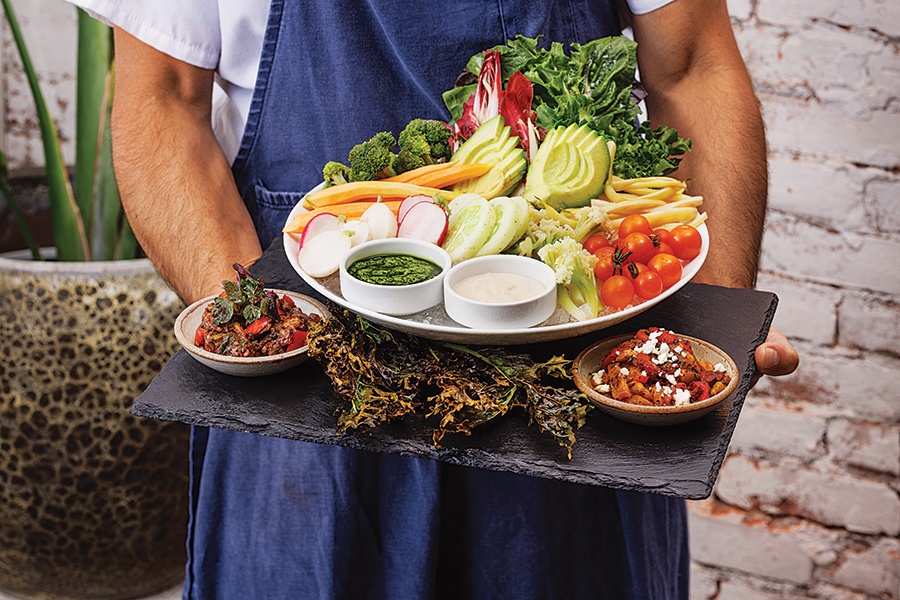 Not your nonna’s veggie-dip platter. / Photo by Adam Detour

Likewise, I don’t know where on Italy’s wind-swept coast they have a tradition of slathering fistfuls of rust-orange “crab butter,” made from pulverized roasted crab innards, onto half-shell razor clams ($22) and hitting them hard on a hot grill until burnished and sizzling like they do at Faccia Brutta. But if I figure it out, I’m hopping on a plane. It was extraordinarily good. The sludgy butter kicked up the bivalves’ ocean intensity, while beefy baby morels took the tune an octave lower. A tangle of spring onion rode the sizzle to the table, adding crisp green crunch. Speaking of butter, another winner is the grilled Scituate lobster ($56), which gets a nice kick of heat thanks to a fiery splat of house-made chili-garlic crunch that spikes the butter-mounted lobster brodo coating the accompanying steamed clams and fregola pasta in a delicious way.

The chefs’ finesse with fish cookery is even more evident in the perfect brochette of local swordfish spiedini ($15), which gets painted with bright-green salsa verde, then removed from the grill at just the right moment. Pulled apart with the tines of your fork, it collapses into tender, still-moist swaths—not the chalky denseness you get when you go even seconds past. Laced with fennel pollen and fiery harissa, smoky grilled bluefin tuna ($39) was like North African shawarma in a pescatarian key, with an appealing charry crust that typically requires sacrificing a centimeter-plus of overcooked-ness right near the surface. This one was flawless.

The pastas I tried were hit-or-miss. On the hit side were sensational Gulf-shrimp-and-crab paccheri ($34), tossed in a bright but complexly layered tomato sauce with bouillabaisse-strength intensity, and orecchiette ($33) in a rich, tomatoey beef sugo punched up with spicy ’nduja sausage. The rest struck me as a little basic, or maybe just crowd-pleasing—either of which would be a departure from the chefs’ JK Food Group brand. I probably should check my omnivore privilege, but I’ve always admired the eff-your-feelings ruthlessness of the dietary-hang-up-agnostic menu at Little Donkey, which comes off as “director’s cut” in an exhilarating way. A cut I wouldn’t expect to include a yawner like Faccia Brutta’s rigatoni cacio e pepe ($27—there were some peas!) or pansotti ($29), a ravioli-like specialty from the Ligurian coast that started off nice but ended up slumping down into a low-note walnut-brown-butter-ricotta haze. For me, it was just all right. 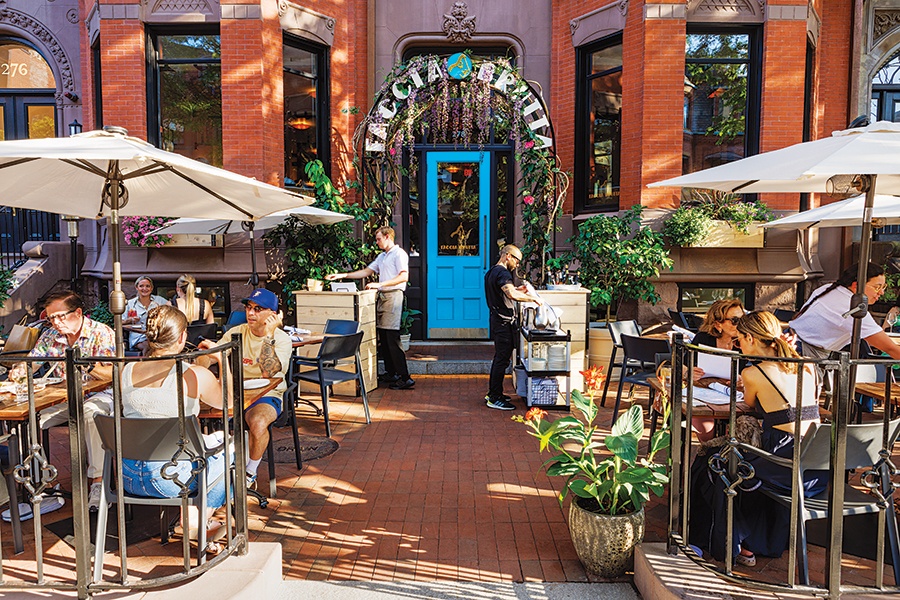 I can’t tell if the kitchen’s been so mired in tweaking the suite of expertly made gluten-free pastas (available retail) that they need more time to perfect these recipes, or if they simply haven’t had the heart to send home any contestants yet. But it would seem that one big advantage of making up a genre as you go along is not being compelled to offer seven pasta choices. Maybe “coastal Italian” has, I dunno, four.

Service overall was smooth as a balmy Elban breeze, and every staffer I interacted with knew their stuff—though I’ve never speed-ordered as fast as the night a server gave our table a three-minute warning before the kitchen’s 10 p.m. close: intel you should probably disclose right when you seat a 9:15 pm table, especially if they’re lollygagging over drinks with menus still in laps.

Speaking of which, it was a nice surprise to see the beautifully curated vino offerings—a grape geek’s playground where quirky natural wines intermingle with cru-level splurges and not a bottle reads like a grudging space-filler. Especially for a block of Newbury where a stylish patio restaurant like Faccia Brutta could easily phone it in and, you know, sing the Rhône book (sorry…), it feels like an in-it-to-win-it flex, indeed. Seacoast, out.