Boston’s Biggest Forces in Greek Dining Are Coming Together

Chef Brendan Pelley will play with live fire at Bar Vlaha in Brookline, a new restaurant from the team behind Krasi, Greco, and more. 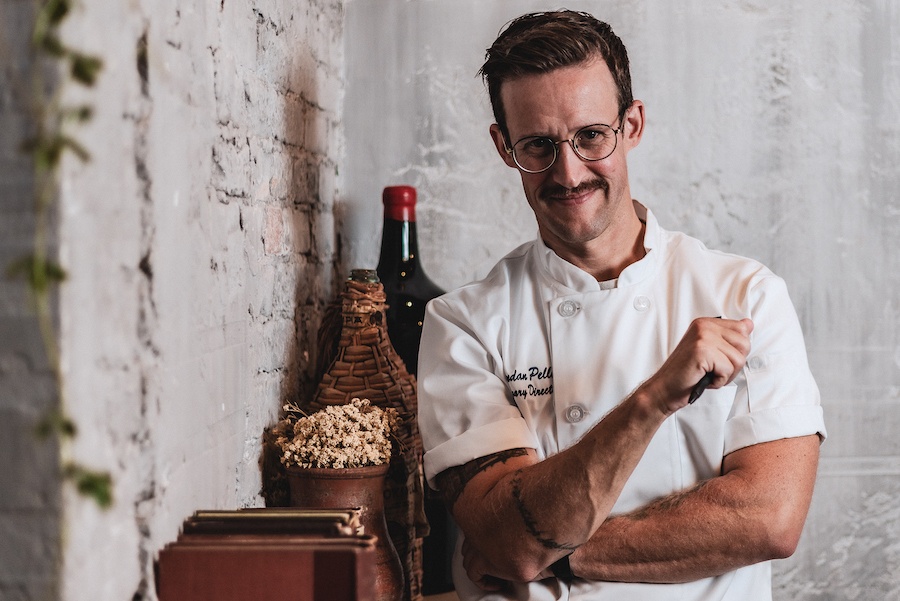 Great news for local lovers of Greek dining: Some of the Boston area’s biggest names in Hellenic cuisine are joining forces, and they have plans to expand a buzzy empire of restaurants to Brookline—and beyond.

Prepare for plates full o’ spit-roasted meats, because later this fall chef Brendan Pelley will fire up an open-flame grill (and start spinning the souvla) in the open kitchen of Bar Vlaha. The restaurant at 1653 Beacon St. is going to shine a spotlight on the rustic Greek cookery of the Vlachs, a community of nomadic shepherds, and serve as an exciting new stage for Pelley, whose 2016 pop-up Pelekasis was at the forefront of a then-wave of exciting Greek dining projects around Boston.

But wait! It gets better: Bar Vlaha is only the first opening that Pelley will oversee as the inaugural culinary director of Xenia Hospitality Group, a newly anointed collective of Greek restaurants that includes Back Bay’s spiffy wine heaven Krasi and the fast-casual chain Greco. Xenia is the brainchild of restaurateurs Demetri Tsolakis and Stefanos Ougrinis, who tapped Pelley to oversee the culinary direction of the portfolio as it grows: Besides Bar Vlaha, the Xenia team has imminent plans for additional locations of Greco (in and outside of Boston), is expanding its Greek food market Agora, and has another new restaurant in the works for the second half of 2023.

“We want to make Boston a center for Greek food,” Tsolakis says. “I think we’re doing that in people’s eyes, because we have so much more than just tavernas and mom-and-pop diners.”

Being part of that movement was an opportunity Pelley couldn’t pass up. “I didn’t want to be tied down to just one project anymore, and then Demetri came to me with his plans for world domination,” Pelley says with a laugh. Now the chef is ready to put his own stamp on things. “We want all these concepts to have really strong individual identities.”

To do some very important, very delicious research on the identity of Bar Vlaha, Pelley made a summertime trip to the mountainous villages of central Greece to dive deep into the culinary traditions of the Vlachs. He feasted on freshwater fish and the famous spit-roasted meats of Metsovo, made savory pies in the kitchen with yayas (that’s “grandmothers”), and foraged for wild mushrooms in Grevena, nicknamed “Mushroom Town” for the many hundreds of species found there. (Pelley, a longtime fungi-foraging enthusiast, even got a mushroom tattoo to commemorate the occasion.)

All that firsthand experience will come into play at Bar Vlaha, where Pelley intends to emphasize traditional Vlach techniques across a menu of dishes that are “smoky, earthy” and fit for family-style platters, he says, in contrast to the lighter, region-hopping small plates of sibling spot Krasi. For instance, Bar Vlaha will feature live-fire-grilled rainbow trout alongside plenty of slow-cooked meats, from braised wild boar to spit-roasted whole lamb (its offal will be used to make kokoretsi.) Starters will emphasize seasonal veggies, and there’ll be a number of interesting Greek cheeses, including galotyri, a silky and spreadable variety made with sheep and goat milk. Expect plenty of pies, too, both savory (such as alevropita, a thin-batter feta pie) and sweet (galopita, a crustless milk custard pie). Some freshwater foods, such as snails and frog legs, might make an appearance as well.

“The food is going to stay really true to the Vlach people. I’m not going to get really cheffy with interpretations or use modernist techniques,” Pelley says. That’s a change from the more contemporary approach he plied at Pelekasis as well as Doretta Taverna, a now-shuttered Greek restaurant in Park Square. After a few years detouring in the ‘burbs, where he turned Groton’s Gibbet Hill Grill into a dining destination and oversaw the culinary program at Lowell’s Mill No. 5 complex, Pelley’s return to Greek cuisine in Brookline will lean into rusticity. “I’m really excited about it,” Pelley says. “It’s like home cooking.” 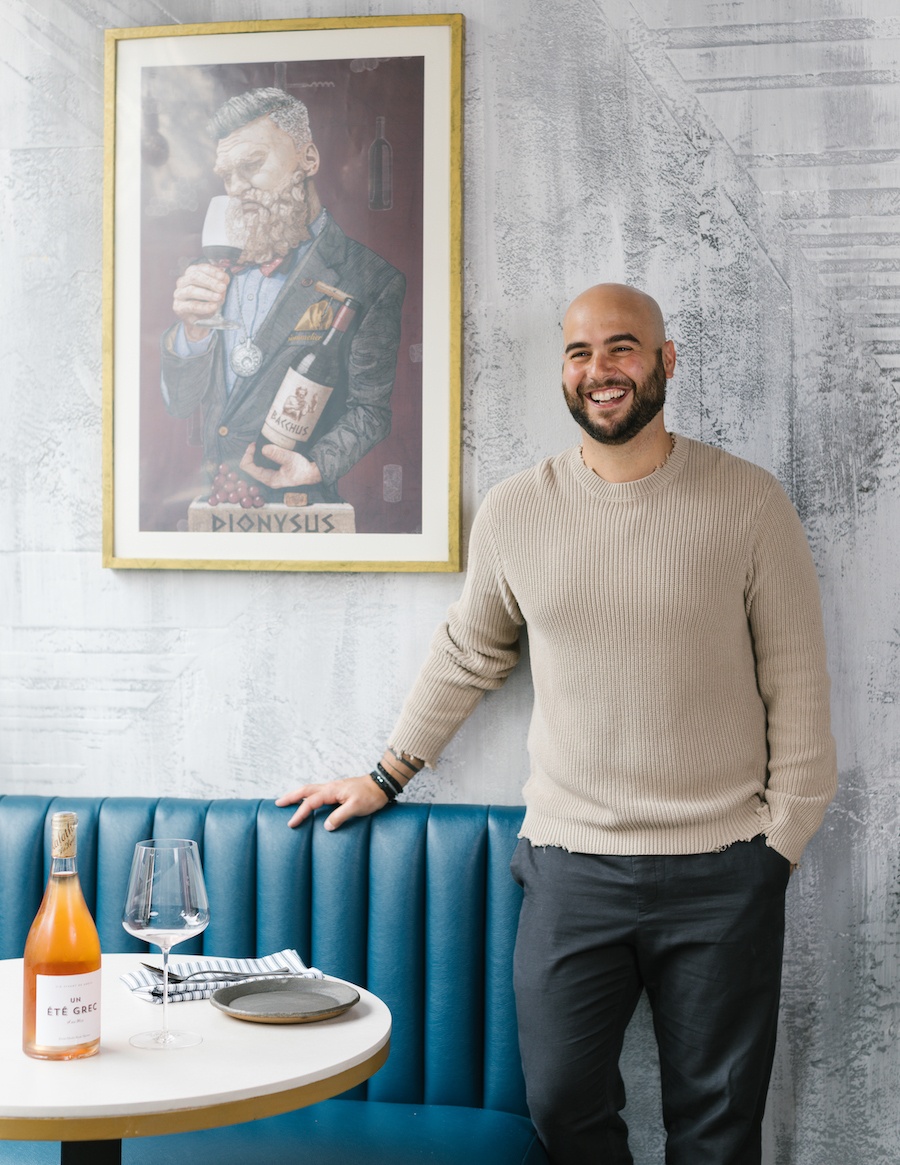 Homeyness will characterize the restaurant’s interior as well, Tsolakis says: “It’s a mirror of a traditional Greek home, from the utensils to the plateware to the embroidery of the cushions.” Beverage director Lou Charbonneau—who has already been making magic at Xenia’s subterranean cocktail bar, Hecate—and wine director Evan Turner, whose list at Krasi is billed as the largest all-Greek wine selection in the country, will create the drink list.

For his part, and besides getting Bar Vlaha ready for Brookline, Pelley has already quietly been in the kitchen at Xenia’s other restaurants, developing new menu items as well as reintroducing some of his signature plates. For instance, new to the brunch menu at Krasi is Pelley’s 100-layer spanakopita, a Boston-food-world fave he first rolled out back in his Pelekasis days, and Greco has a spate of additional salads and pitas hitting the menu in October, including a plush pocket stuffed with grilled Halloumi cheese, skordalia garlic spread, hot honey, and more.

In fact, fans of Halloumi, feta, et al. should turn their attention to the display of cheeses that Pelley is now curating at Agora, a marketplace of Greek groceries—from proprietary olive oils and sauces to Pelley’s house-made Greek yogurt—within the Seaport location of Greco. Expanding Agora is another big focus for Xenia going forward, Tsolakis says; it has grown to encompass over 400 products and now ships nationwide.

Most immediately, though, Bar Vlaha will mark the next notch in Xenia’s widening belt of Greek dining concepts—and it’s one that has its team feeling particularly proud. “We’re opening up the door for something undiscovered by people outside of Greece,” Tsolakis says. “No one has done a concept like this. It’s going to be a nice history lesson and an ode to an indigenous people who still exist today.”