Eat Sandwiches Full of Sunshine at Shirley in Davis Square

Open since late summer and born out of a pop-up, this Somerville sandwich-and-more shop wants you to eat food that makes you feel good. 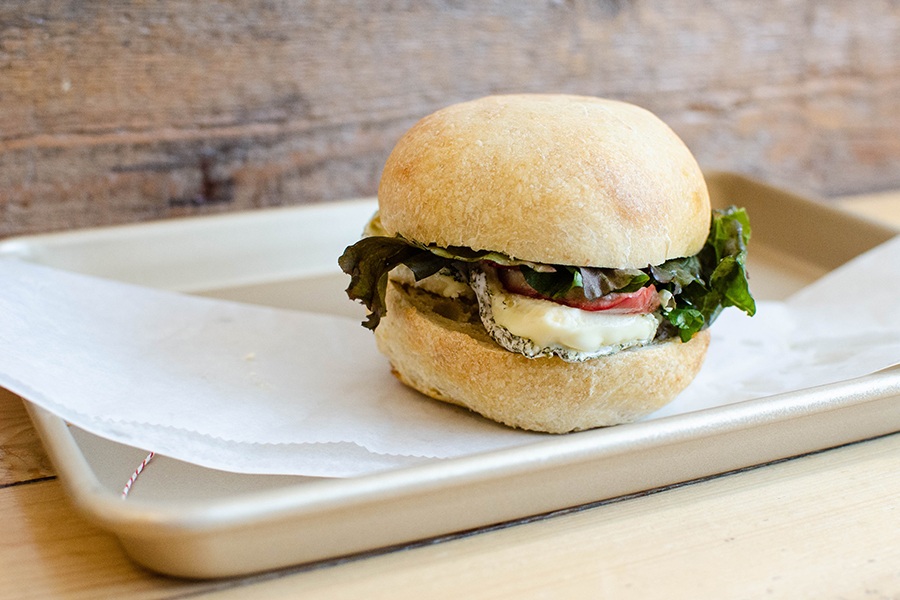 First off, two points of clarification: Shirley is a restaurant, not a person. (Well, Shirley is a person, but the owner of the restaurant called Shirley is chef Kat Bayle, and Shirley is her 102-year-old grandmother.) And no, Bayle doesn’t want you to literally eat bits of 10,000-degree-Fahrenheit sun for a snack; that’d probably hurt. What she means by the Shirley motto “eat more sunshine” is something a little more metaphorical.

“I’m trying to give people sunshine in the form of food,” Bayle says—most often some combination of local, seasonal, sustainable, and/or organic, sometimes from a farmer or producer she knows well. “Just like umami is the taste that’s the hardest to say exactly what it is, I think that sunshine is the same thing,” she says. 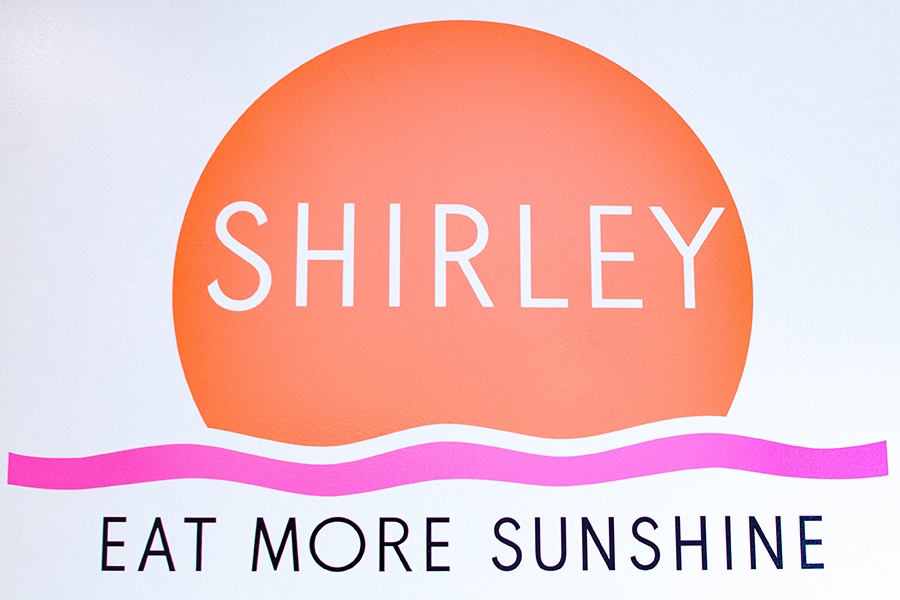 A colorful logo decorates the wall at Shirley. / Photo by Rachel Leah Blumenthal

For Bayle, sunshine was her first taste of the alien-looking vegetable kohlrabi: She was living in California, visiting some farms with the idea that she might want to be a farmer, and a farmer pulled one up, sliced off a piece with a pocketknife, and wiped off the dirt. “I was like, This is what kohlrabi tastes like, and kohlrabi shouldn’t taste any other way,” she says. And sunshine is also a strawberry: Sure, you can buy one in the middle of wintertime that tastes like the inside of a refrigerator; sometimes you just want a strawberry, season be damned. But imagine picking a strawberry fresh from a farm, warmed by the sun—that’s that feeling she’s getting at. 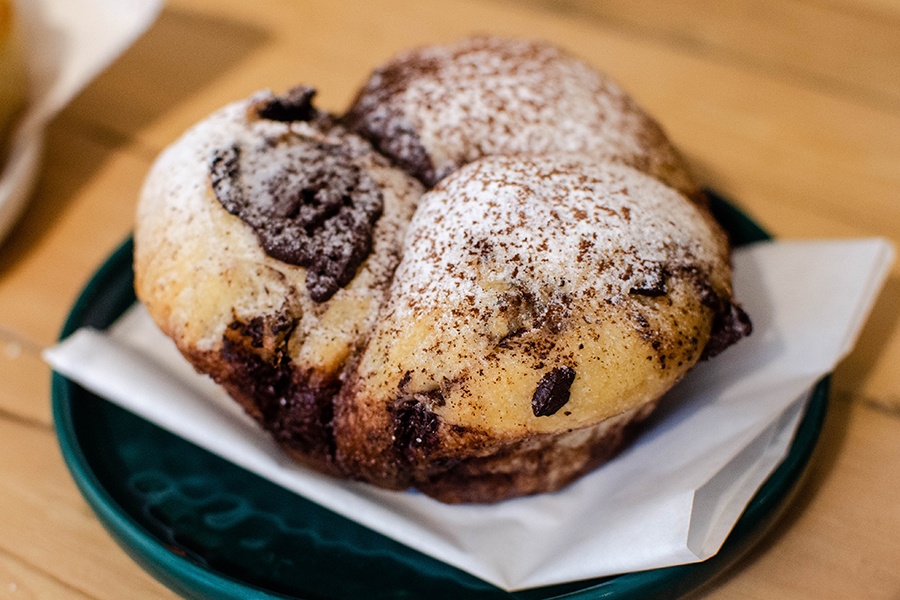 It’s not meant to be pretentious: Bayle’s been there, done that on the fine-dining front. Food at that level can feel inaccessible or uncomfortable to people, she says; those restaurants can feel rigid or formal. “I think a lot of people associate those things with good food, with a lot of care put into the food, but I make things [at Shirley] the same way that I did at Michelin restaurants, even though it’s just a sandwich. I want it to be accessible and exciting.” To that end, Shirley is simply a takeout shop—not a white-tablecloth or even a sit-down restaurant—packaging its sunshine-filled treats in paper tied with a string and sending you out the door.

What it all comes down to is really excellent sandwiches and baked goods, and, as the signage says, “fun drinks,” all highlighting seasonal goods and all made from scratch by Bayle and one employee in the little Davis Square space. Long before actual sun starts streaming in through the College Avenue windows for the day, Bayle might be up making one of her breads or baked goods like chocolate-chunk pumpkin scones, apple-cider doughnut muffins, or personal-size apple-quince pies. 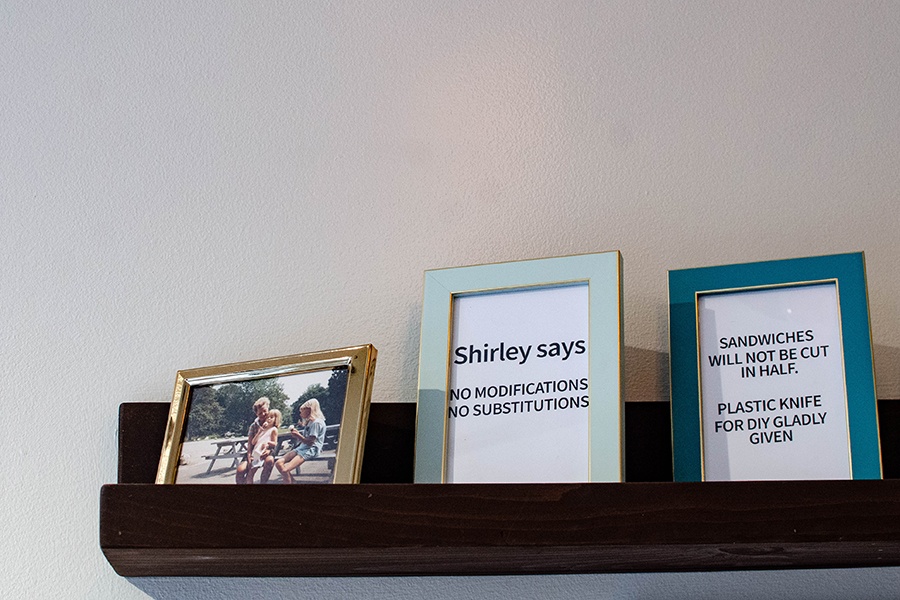 At Shirley, you get what you get, and you’ll love it. / Photo by Rachel Leah Blumenthal

Like in fine dining, Bayle says, “every component of the dish is important, and you should either source it from someone who knows that they’re doing, or you should make it yourself.” She’s confident in her bread—with good reason; it’s delicious—and making it herself also gives her the opportunity to fine-tune it for its intended purpose, making different types to fit the different sandwiches she has in mind. 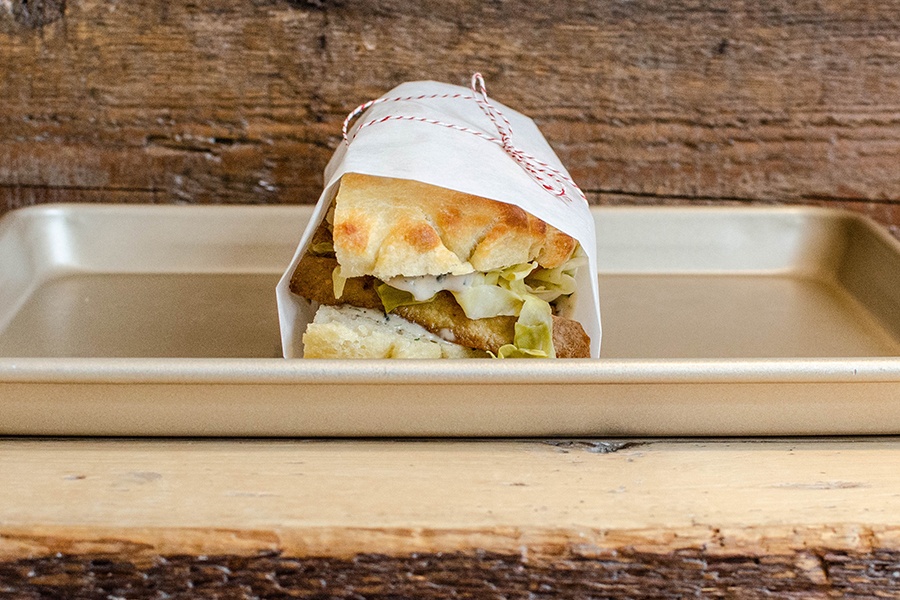 From time to time, Shirley offers various versions of its popular banh mi; this is the crispy lemongrass tofu version with tofu from Maine baked with locally grown spices, topped with a creamy herb sesame sauce and spicy pickled vegetables. / Photo by Rachel Leah Blumenthal

The menu’s always changing, but you’ll always find a handful of sandwiches (usually including one vegan option), some baked goods, and drinks. Soup’s likely to come back soon as the weather cools a bit more, a great pairing for the grilled cheese that just jumped back on the menu for the fall. (It currently features roasted Brussels sprouts and Cabot cheese.)

And even though this is Shirley’s first fall in Davis Square, the concept has been around longer, most recently for nearly a year as a pop-up at Somerville’s Bow Market. There, Bayle enchanted crowds with a similar menu, especially her take on a banh mi, so if you ever spot that on the current Shirley menu, rush over. (The best way to stay in the loop? Follow Shirley on Instagram.) 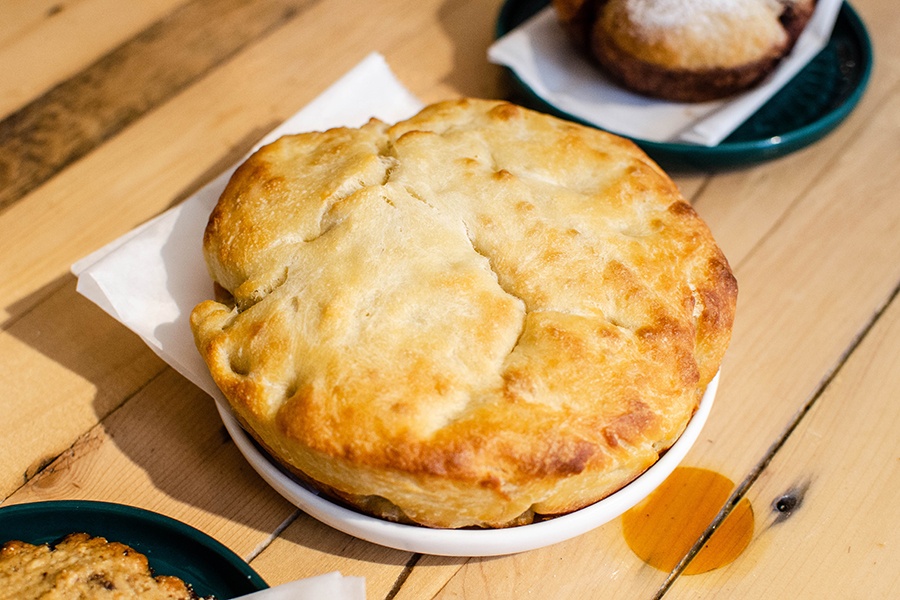 “I’m very lucky that I’ve always had good food, food full of sunshine,” Bayle says, recalling dining with her grandmother over the years, whether getting tomatoes from the farmer that her grandmother had been going to for decades or experiencing Boston’s classic white-tablecloth restaurants back in the day. “I think I partly learned from her that good food can be really expensive and really fancy, but it can also be from somebody’s backyard,” Bayle says. 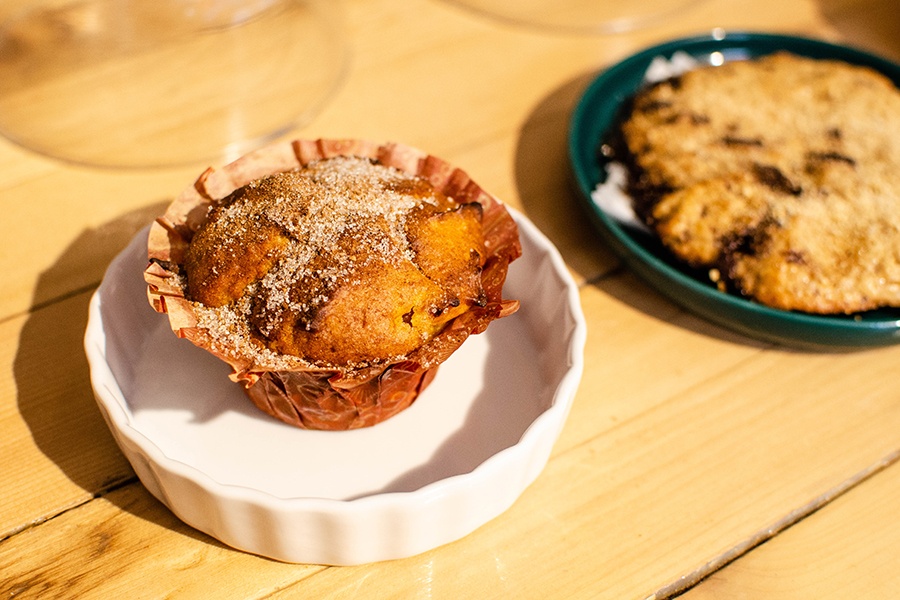 Visit Shirley for something in the middle. Maybe the “eat more sunshine” motto speaks to you; maybe you don’t like to think so abstractly about your lunch. Either way, one thing’s certain—Shirley is serving up some supremely tasty treats, and Davis Square is lucky to have it. 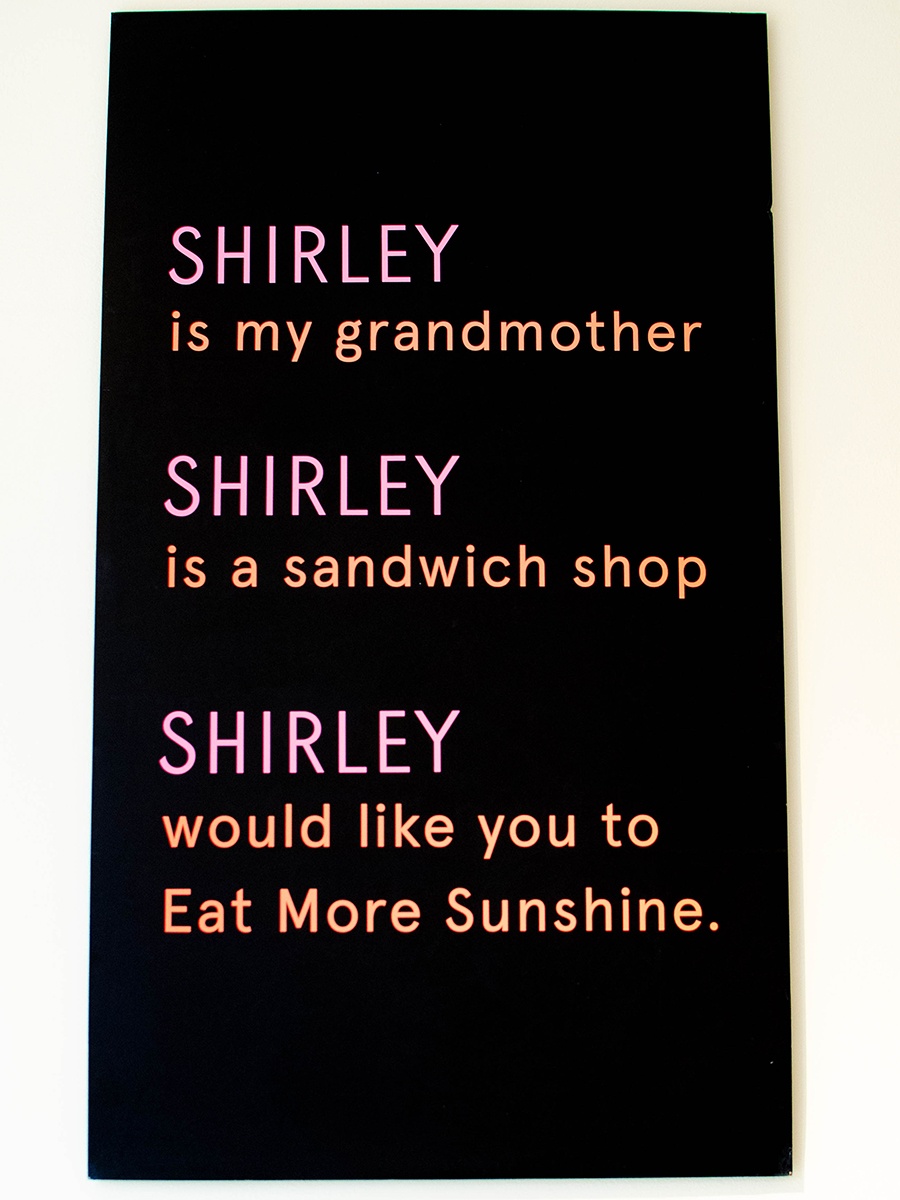