In an increasingly tough time for independent restaurants to open and flourish, this tiny South Boston spot is making magic one five-course tasting menu at a time. 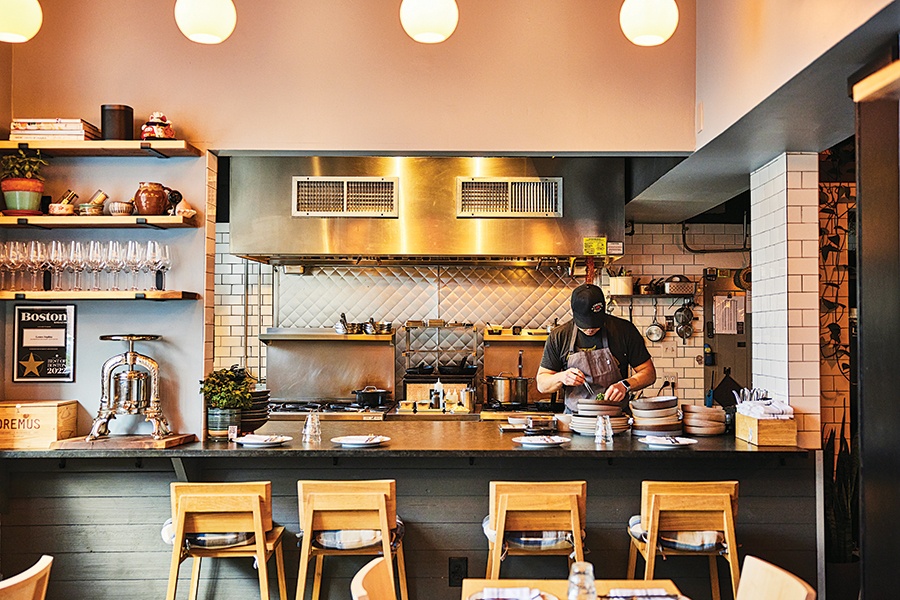 I was minding my own business in a restaurant the other night when something punched me in the mouth. I didn’t see it coming: My assailant was pale, drably dressed, and meek-looking. I sat there blinking, dazed. It was a plate of king trumpet mushrooms at Lenox Sophia, a 16-seat New American restaurant in South Boston, and it was one of the most luscious, intensely flavored things I’d eaten in a while. The dish could serve as a metaphor for this place as a whole: tiny, modest, and packing a sneaky wallop. In a word: gobsmacking.

Shi Mei, Lenox Sophia’s chef-owner, faced a mountain of challenges to get his thimble-size spot open last year. Labor, equipment, and real estate costs in Boston were at an all-time high. Inflation was multiplying his food budget. Then Mei went to get a beer-and-wine license, a must to lure investors, and found that not one was available in the entire city. It makes you understand why so many of the indie spots on this magazine’s Top 50 Restaurants list are in Somerville, Cambridge, Brookline, Newton, and beyond, and why Boston neighborhoods like the Seaport are dominated by national chain outlets. Nevertheless, Mei soldiered on, and we’re grateful he did, as his tiny open kitchen consistently produces eye-catching plates with bold flavors.

Mei’s sensibility has clear echoes of his former bosses: the tweezer-precise platings of Thomas Keller (the French Laundry); the wide-ranging flavors of Jason Dady (Bin 555); the complex, fermented Asian flavors of Tim Maslow (Whaling in Oklahoma); the French technique and value-priced prix fixe menus of Alexander Crabb (Asta). Further, his approach offers a glimmer of hope for other ambitious chefs looking to succeed in a city that seems increasingly hostile to them.

Occupying the former home of Australian restaurant KO Catering & Pies, Lenox Sophia—the name comes from an unused entry in Mei’s list of possible baby names—features six two-tops that can be rearranged to accommodate parties of up to six and four counter seats overlooking the wee open kitchen, providing a great show for food geeks. The room is spare and modern: dove-gray walls, concrete floor, blond-wood tables and chairs, soft lighting, and comfortable noise levels (except for the occasional loud-mouthed customer). The one decorative flourish is a gleaming antique silver duck press. A tiny waitstaff provides genteel service to the whole room. In other words, the money’s going toward the food on your plate.

That food arrives in the form of a prix fixe menu, a switch from the restaurant’s earlier months, which featured an à la carte format. Now, diners are offered a five-course menu in two versions: omnivore, mostly focused on seafood with occasional red-meat dishes, and vegetarian. This reflects a major trend among higher-end Boston-area restaurants: offering only a prix fixe menu to control food costs and more consistently execute complex dishes with esoteric ingredients (see Mooncusser, Nightshade Noodle Bar, Cobble, and others in recent years, not to mention older stalwarts such as O Ya). The format requires diners to place a lot of trust in the kitchen. Lenox Sophia consistently holds up its end of the bargain with a series of inspired dishes drawing mainly from French, Italian, and Japanese traditions.

The seasonally changing menu is a gently paced progression of small- to medium-size plates. A September first-course bowl of grape-size peeled heirloom tomatoes with tart gooseberries sat in a limpid pool of cool tomato water, given vivid but subtle accents of lemon verbena and other snipped fresh herbs and bedecked with edible flowers. It was an evocation of late summer that I’m still thinking about months later under gray winter skies: tomatoes caught at their platonic ideal moment of tart-edged sweetness, given just enough cheffy elevation to induce gastronomic bliss.

Then there’s that aforementioned plate of mushrooms, which looked dull by this kitchen’s photogenic standards: wan-looking grilled king trumpets atop an ochre sauce. Yet its concentrated, kaleidoscopic flavors shocked my senses with bursts of umami, sweetness, and tang. The unexpected notes were thanks to garlic long-fermented in honey, a house-made miso with fermented elderflower, and a sauce based on dehydrated umeboshi plum, which shimmered around the meaty flavor and succulent texture of the mushrooms. 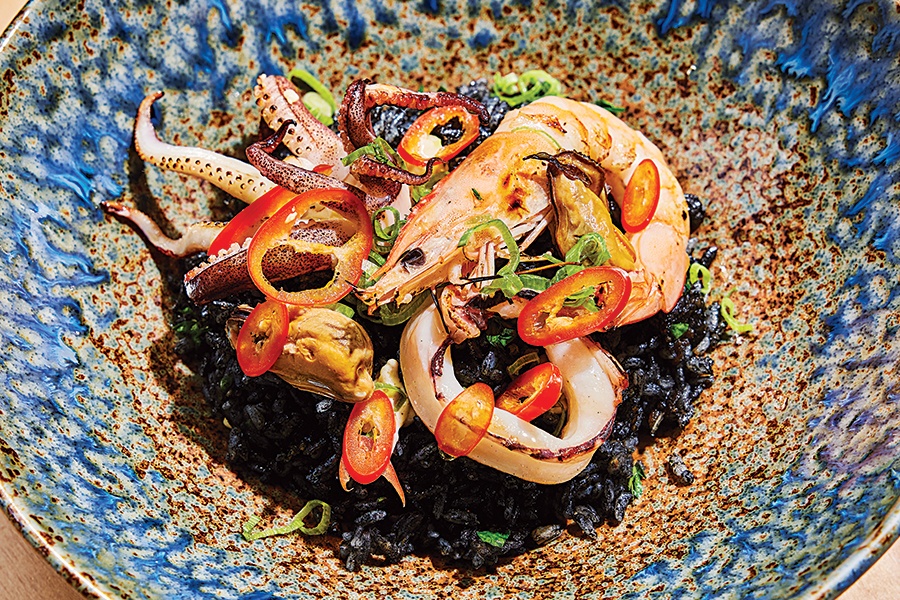 The magic continues into the third course. On one visit, it was arroz negro, short-grain rice tinted with iron-tangy squid ink and dotted with bits of squid, octopus, and head-on shrimp. Offering a briny punch courtesy of shaved bottarga and an aioli deepened with smoked oyster, the rice was baked in the oven and then finished on the stove to give it a socarrat-like caramelization and crunch. Its vegetarian counterpart at the time was a cacio e pepe–like preparation of house-made tagliatelle, boiled briefly and finished on the stove in butter and EVOO, then showered with shavings of 24-month-aged Parmigiano-Reggiano and a generous blast of summer truffles. It was another dish that embodied delicately restrained technique.

Fourth-course options are bigger and showier, the exclamation point on the savory part of the menu. The hearty, starchy stew that is sancocho de pollo was rendered here as slices of juicy, perfectly seasoned chicken-thigh roulade with beautifully crisp, browned skin—the best bites of chicken I’ve had in recent memory—with the starch presented as a bubbly-textured cassava cracker, plus a few carrots and marble potatoes atop a golden, rich chicken broth. A halibut fillet was wrapped in a cabbage leaf and gently steamed, served with a sauce barigoule that substituted cabbage cores for artichokes to harmonic effect. The finishing touch? A smashing preparation of red potatoes that recalled luxury-steakhouse hash browns. 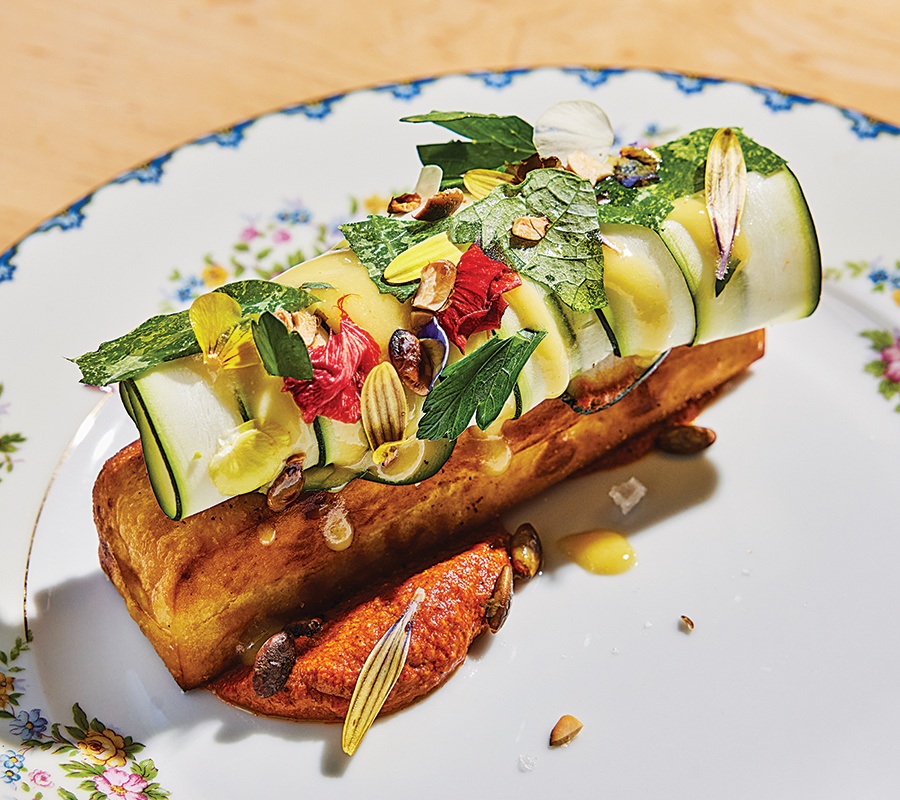 Vegetarian options are not an afterthought, with stunners like the airy, crispy panisse in a pool of flavor-packed romesco. / Photo by Joe St. Pierre

A rare miss was found in Mei’s take on porchetta, with belly wrapped around tenderloin. While it achieved the right diminutive scale, it produced a slightly dry center. Meanwhile, the vegetarian panisse was a showstopper: a pan-crisped oblong of airy, custardy chickpea mousse that was crowned with edible flowers and a ribbon of zucchini, all placed atop a dollop of intense, garlicky romesco.

Desserts provide a luxurious, Instagrammable finish to any meal at Lenox Sophia. A rich chocolate ganache with hazelnuts and blackberries got a lick of heat from gochugaru sauce. Crunchy oatmeal streusel wrapped in a sheet of thin-sliced Granny Smith apple was like an inverted apple pie, served over a swirl of butterscotch and topped with a dollop of Chantilly cream.

Unable to secure that coveted liquor license, Lenox Sophia instead settled for a rare-in-Boston BYOB license, which is easy to view as an asset. You’ll have to plan ahead to bring 750 milliliters of wine or 64 ounces of beer per person at the proper temperature (no ice buckets here), but that means you can drink in a more lordly fashion while dodging the typical restaurant markup. Pro tip: Grab some bottles at Social Wines a block away; operations director Eileen Elliott always has helpful, affordable pairing suggestions, including terrific natural wines, for this menu.

At $99 per head plus taxes and a 4 percent kitchen appreciation fee, Lenox Sophia isn’t exactly cheap, but it consistently delivers sophisticated, mostly gorgeous, always delicious food, making it a value-priced entry at the higher end of our scene. Its combination of a compact size, small team, and limited menu—with BYOB further improving the math for diners—points to a formula that could help chefs thrive in the city instead of fleeing for friendlier suburbs. Lest Boston slide into the ranks of American cities with the same dull slate of national chain restaurants, in effect becoming “Peoria with oysters,” let’s hope that innovative little indies like Lenox Sophia are encouraged to prosper.

First published in the print edition of the January 2023 issue, with the headline “Queen Sophia of Southie.”