Food Crawl: Eight Things You Need to Eat in Boston’s Back Bay

Where to nibble the neighborhood’s best nosh, from aged steaks to all the meat and cheese .

Back Bay’s got a bevy of different cuisines to cater to every craving. Hankering for punchy ceviche, or caviar-crowned bites? Check and check. We catalogued some of the best and most iconic dishes you have to try as you eat your way from one end of the neighborhood and back again. 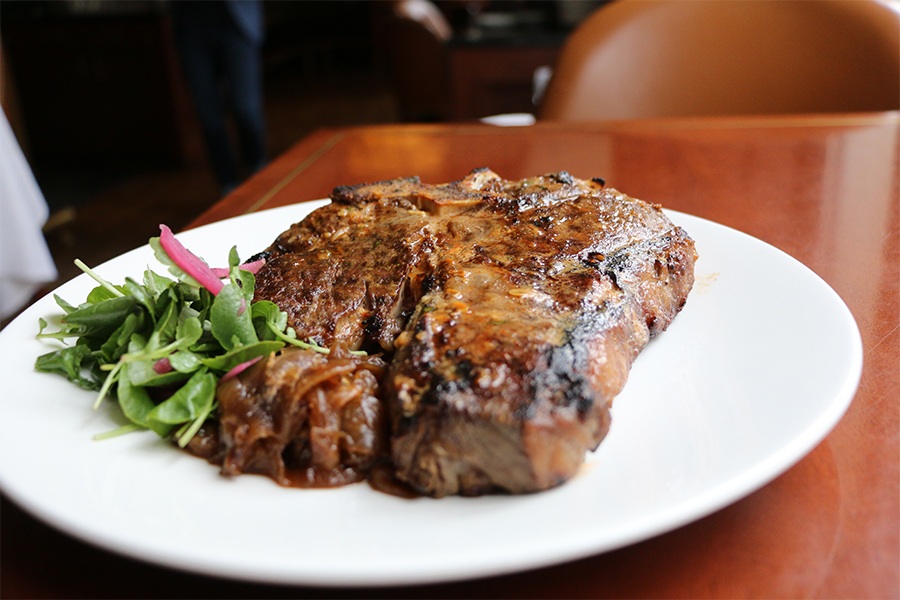 Good things come to those who wait. For Grill 23 executive chef Ryan Marcoux, that means selecting prime-grade ribeyes that have been aged for 100 days, with that timeframe allowing the protein’s natural enzymes to break down. For diners, that means way more tender meat. If that’s not enough of a chemistry lesson for you, the steak owes its flavor to the Maillard reaction, a process where high heat caramelizes the amino acids and sugars of the steak’s surface, gifting guests with that perfect crust. Marcoux cooks the steak in the broiler where temps can soar above 1000 degrees, while you, meanwhile, can sip a glass of vino while you wait in Grill 23’s well-appointed (and climate-controlled) dining room. Order this scorcher off the à la cart menu, and pair it with the Marcoux’s recommended sidekicks of sautéed spinach and the house-made tater tots.

“Puro” means “pure” in Spanish, and a laser-focus on pristine flavors is what you’ll find at Nuevo Latino eatery Puro Ceviche Bar on Newbury. Leading the pack among small plates, a handful of entrees, and (of course) ceviche, the aguachile shrimp ceviche distills a handful of ingredients down into punchy bites. Here, lime juice essentially cooks chunks of shrimp—like all ceviche, the shellfish skips the stovetop—and cucumber, red onion, jalapeno, and cilantro joins the mix. The dish is both cooling and fiery at the same time, owing to the kick of serrano pepper sauce. And if you feel a bit of sweat pricking your forehead, all you need is a hearty swig of pisco sour to help douse the heat.

No disrespect to the other dishes—the delightfully messy Memphis-style baby back ribs singing with the sweet heat of a hot honey glaze, the roasted jalapeño mac and cheese—but you could scarf down only the biscuits from Buttermilk & Bourbon and leave a happy (and full) customer. Chef/owner Jason Santos’s carb-y centerpieces are the things of dreams, glazed with honey and served warm alongside ramekins of smoked cinnamon butter and pimento cheese spread. Feeling sweet or savory? Savvy diners know the secret to these biscuits is to tear ‘em in half, and slather butter on one half and cheese on the other. It’s the kind of culinary compromise we’re living for. You can also spot these beauties on the menu at the just-opened second location at Arsenal Yards in Watertown, too.

In 2018, Cusser’s Roast Beef and Seafood opened as a takeout-window only concept within Mooncusser—then known as Mooncusser Fish House before it closed in March 2020 and reopened with new chef Carl Dooley and a new name in May 2021. Now, Cusser’s is taking over the whole first-floor space but still sticking to the seafood shack-inspired grub and roast beef sandwiches that it does best. The Cusser’s three-way sandwich makes waves with ribbons of roast beef piled high on a house-made onion roll and topped with jack cheese. While the sando’s slathering of mayo and barbeque sauce might seem like overkill, the mayo’s richness balances the smoky, sweet, and zippy house-made barbeque sauce. 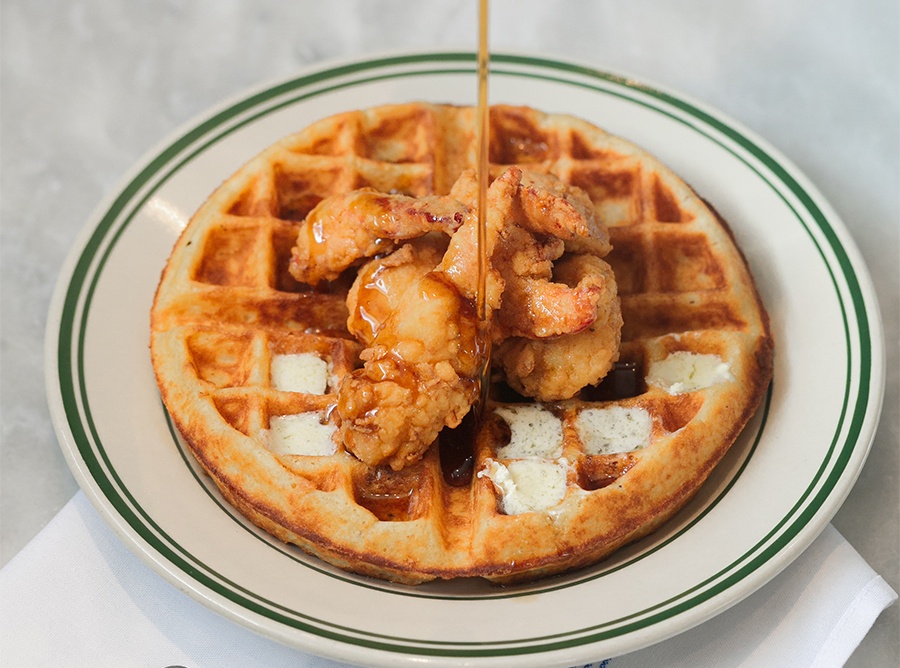 “Saltie” might be right there in the name, but this spot knows when to get a little sweet, too. Take the fried lobster and waffles, a take on the classic chicken and waffles, which sees a generous helping of the fired shellfish in place of the poultry, atop a breakfast-y, classic waffle. The entrée-meets-dessert is then topped with a dollop of sweet corn butter and drizzled with house-made spicy syrup for a triple-threat of sweet, heat, and savory flavors. Since first opening in 2016, Saltie has showcased a bevy of seafood—from oysters to rock crab carbonara and tins of imported sardines with crusty house-made bread. And if this seafood-centric southern sendup isn’t proof enough of the spot’s creativity, the Saltie Girl Seafood Pizza offshoot that opened in late 2020 sees pies piled with caviar, smoked salmon, and more.

If you can’t hop a plane to the UK, at least you can hoof it to the Cornish Pasty Co. to soak up some of that welcoming pub vibe. Here, the menu revolves around the pasty, essentially a popover stuffed with goodies that traces its roots to the Cornwall region of England. You’ve likely scarfed down one of its low-brow American cousins, the Hot Pocket. Go for the traditional oggie, which sees chunks of baked steak, potato, onion, and rutabaga lovingly wrapped in a glossy pastry shell. Dunk the delight in the accompanying red wine gravy and it’s basically a steak dinner that you can savor on the go.

Salty Pig Board, the Salty Pig

You might be overwhelmed by the options at the Salty Pig, where you assemble your own charcuterie board from a smorgasbord of treasures. Build-your-own boards come with one meat, two cheese, and three “round outs” like almonds or marinated almonds. But do you pick a luscious Prosciutto di Parma or a chicken liver terrine? A Vermont Tarentaise or a Spanish manchego? Just skip the existential/meat-and-cheese-based burning questions and order the Salty Pig board off the lunch menu. The curated combo comes with melty prosciutto cotto, pork rillette (a French preparation where the meat is slowly cooked in its own fat for a silky and spreadable consistency), a mild gouda, and smoked shallot marmalade. Then, the only question is what to have for dessert. 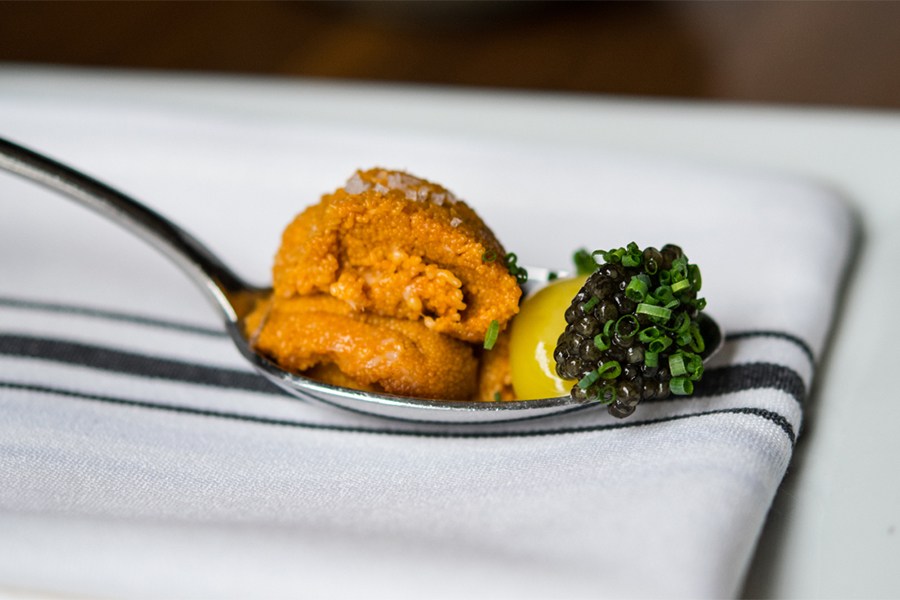 Let’s be real: If you’re going to drop $21 on a single mouthful of food, it had better be out of this world. Luckily, the uni Spoon at Uni is so stellar it’s literally the namesake dish of the izakaya-style spot within the Eliot Hotel. Served on a (you guessed it) spoon, the bite is a study in simplicity, with just Applewood smoked uni, a silky quail egg yolk, a dollop of Osetra caviar, and yuzu juice to add a bit of acid. While chef David Bazirgan took over for Tony Messina at the Ken Orringer-founded spot in May 2021, lucky for those who need a dollop of decadence, this spoonful is sticking around.