Tuck into midday meals starring seafood, ube-coconut pancakes, and more—just a short drive from the city. 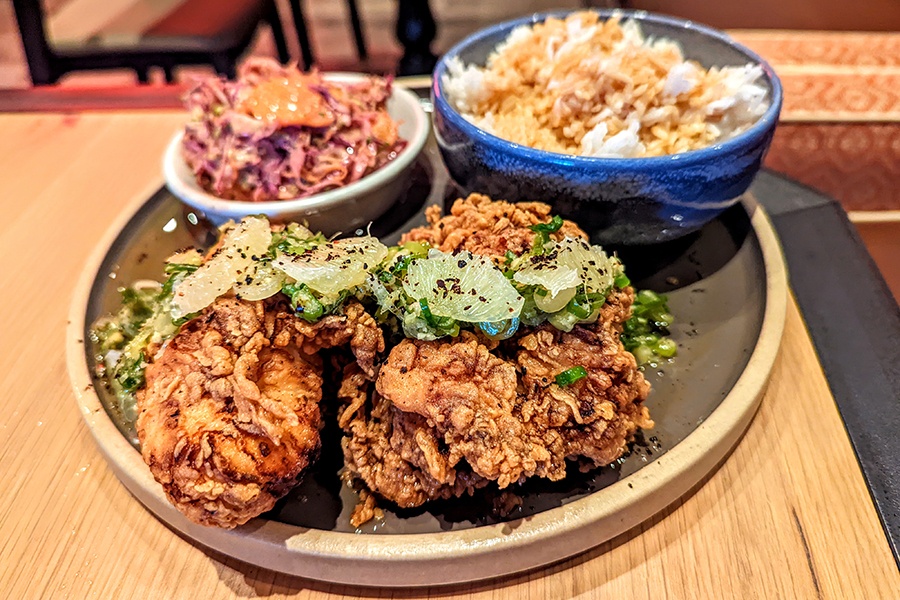 Brunch is basically a vacation of a meal. When else can you bury your normal-life woes and worries under a stack of caramelized-banana-topped pancakes and the horseradish pulp at the bottom of your bloody mary? With that “escaping the everyday grind” in mind, now’s your chance to hit up these destination-worthy brunch spots. Since they’re all a quick jaunt from Boston, you won’t even need to pack luggage.

This guide was originally published on November 30, 2022; watch for periodic updates.

Brunch is all about over-the-top eating—bacon and hollandaise on everything, plus fluffy stacks of pancakes—and fondue is just about as decadent as you can get. At this beauty right on the banks of the Essex River, you can soak up water views while dipping pretzels, apple slices, potatoes, and other goodies into silky molten cheese fondue during weekend brunch. And if you need something to cut all the creaminess, balance out the meal with a heap of fresh-shucked, briny oysters that are served with a house-made mignonette.

The bevy of brunch dishes on this spectacular menu cover a lot of different cravings. Do you go classic with a Benedict—featuring chive hollandaise, sweet tomato jam, and poached eggs on toasted challah—or think outside the brunch box with a broiled avocado topped with cotija cheese, salsa verde, and a sunny-side-up egg? The solution, of course, is to bring a friend and unabashedly pick off each other’s plates. Though this Sudbury spot only opened in early 2021, it looks to its older sibling in Easton for its wise-beyond-its-years menu, which also features baked brioche French toast, pumpkin pancakes, and oodles of omelets for those who skew savory. Even better news: The spot is open for brunch every day but Tuesday.

Frankly—and we say this as a friend!—you could use a boozy brunch right about now. Enter the Irish coffee martini, a pick-me-up packed with Irish whiskey, espresso, bitters, and house-made demerara syrup, which is here to fuel your journey through weekend brunch at this beloved Beverly restaurant and market. While you’re busy sipping, be sure to check out the toasts and tartines on offer, too. The whipped ricotta toast pairs pear and creamy cheese on a hearty honey-oatmeal caraway bread, while smoked salmon makes a splash on classic avocado toast. For those looking for a heartier bite, the breakfast burger tempts with pepperjack, crispy onions, and a fried egg—and the bacon jam might just be worth the commute from Boston alone.

Big flavors take flight at this cozy diner right on the runway of the Mansfield Municipal Airport. Where else can you scarf down an Irish Benedict or a vegan “egg” sandwich while planes soar into the sky over you? Craveable plates of cream-cheese-stuffed French toast, not to mention the biscuits and gravy, prove that the spot isn’t just a gimmick. Given that the restaurant is open daily from 7 a.m. until 2 p.m., a Monday morning with magical pancakes—fluffy delights topped by caramelized bananas, cinnamon, and brown sugar—promises to launch your week on a sweet note.

After moving from Ipswich to newer waters in Peabody over the summer, this Greek mainstay is offering up a daily breakfast menu (or, order up a bloody mary spiked with ouzo and call it brunch) featuring the usual suspects of pancakes, French toast, and egg plates. But do yourself a favor and go Greek. Take the strapatsada, a dish of scrambled eggs, braised tomato, house-cured pork, and zippy, spicy feta dip. Or the breakfast gyros topped with two fried eggs, and the locanico Benedict boosted by herby Greek sausage. Do gobble up the bougatsa appetizer, too, a flaky-meets-creamy combo of milk custard wrapped in phyllo dough. Topped with cinnamon and powdered sugar, it’s like starting your meal with dessert. But, hey, that’s what brunch is for.

Restaurateur Brian Moy (of Shojo and China Pearl fame) opened this suburban sibling earlier this year, and its menu is praise-worthy, especially the weekend brunches. Alongside brunch favorites—a breakfast sandwich kicked up with sriracha mayo, a spinach omelet with devilishly rich pork belly—the New American and Chinese inspirations make for playful plates. See the pastel pancakes made with ube, a purple yam, and topped with coconut, plus the Chinese flatbread slathered with crème fraîche and topped with smoked salmon, nori, and chives. And while we’re awaiting the reopening of China Pearl here in Boston, Nomai’s Peking duck bao and Chinese calamari snacks scratch that dim-sum itch.

If Northern Spy—the restaurant in Paul Revere’s former Rolling Copper Mill—had been open during the Revolutionary War, maybe the patriot would have shouted out the spot’s crispy fried oats on his historic ride, too. Given the location’s connection to history, go all in on the old-school and New England-inspired dishes on the weekend brunch menu, like the side of baked beans with chunks of salt pork and a slight sweetness thanks to molasses. Here, apple butter buoys the brioche French toast, while chunks of Jonah crab kick up the Benedict.

Sure, eggs and pancakes snag top billing on most Sunday Fundays. But submitted for the approval of the brunch academy are the seafood-starring weekend meals at the newly reimagined Winsor House, the restaurant by adjacent oyster farm Island Creek. You can avoid the usual suspects entirely—though potato rösti ramps up classic New England egg plates, and sour cream offers a tangy balance in banana- and hazelnut-praline-topped pancakes—and sail on over to the raw bar, where fresh oysters take center stage. Since brunch is supposed to be splurge-y, feast on caviar paired with hash browns and all the classic fixings, or pull out all the stops and order the caviar pancakes, a big production rounded out by an ensemble cast of Island Creek Oyster caviar, vanilla ice cream, and orange curd.