Where to Find the Best Chicken and Waffles in Boston

Check out these fried, syrup-drizzled feasts, from Southern classics to global riffs.

Think all chicken-and-waffles plates are created equal? Think again. The classic comfort food comes in many forms in Boston, from traditional Southern takes to those influenced by Chinese, Mexican, and many other cuisines. We’ve picked out some of our favorite mouthwatering variations, so go ahead and discover your new favorite version of this dynamic duo. 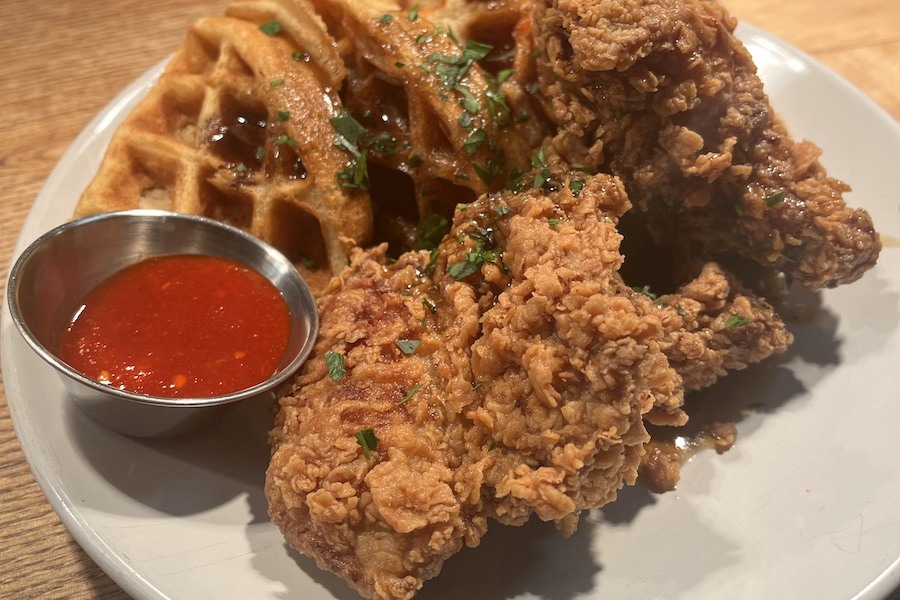 Brassica might be on our list of the best restaurants in Boston, but its brunch menu’s chicken and waffles plate, based on a recipe from a former cook’s grandmother, is fashioned Georgia-style: the waffle batter is made with crème fraiche and cultured cream, so it melts in your mouth at first bite. The boneless chicken thighs, meanwhile, are marinated in buttermilk and a brine of fermented peppers and pickles, then dredged in flour. Brassica is a place known for playing with fermented ingredients, in fact, so it even punches up the plate with a bit of bracing maple umeboshi—plums that are aged in salt, then poached in syrup—as well as a house-made hot sauce of fermented peppers pureed with maple syrup. 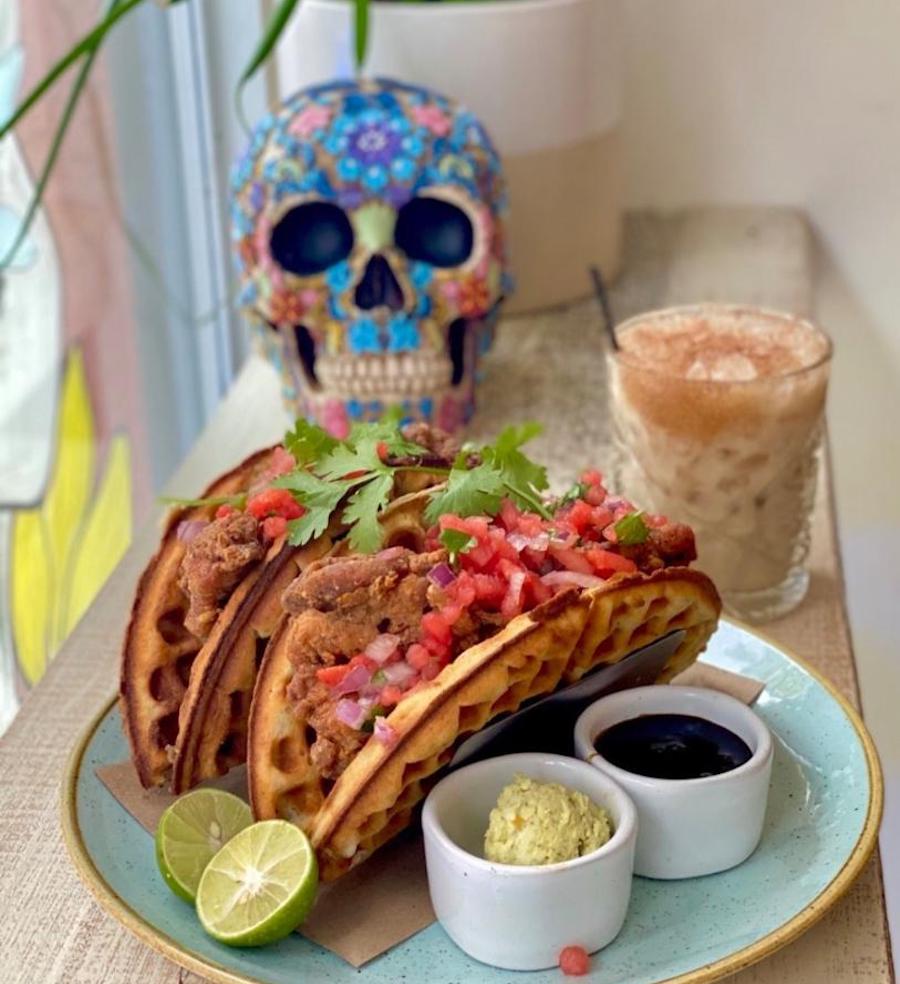 At his coastal Mexican-inspired restaurant in Boston’s Back Bay, Hell’s Kitchen star chef Jason Santos turns out—what else?—chicken and waffle tacos. Blue corn meal is laced with a slightly sweet and savory trace of Monte tequila for the waffle shells, which are filled with Santos’ famous fried chicken recipe: meat soaked in buttermilk and tossed in spices such as garlic, lemon pepper, and cayenne. If you still want to kick up the heat, drizzle on some jalapeño barbecue syrup; the accompanying avocado butter, on the other hand, has a cooling effect, as does the refreshing side of watermelon and citrus salad.

When you’re craving a classic rendition on chicken and waffles, pop into this family-owned neighborhood joint just outside Central Square, which has been a go-to for soul food for 18 years. Owner Tony Brooks turns to his Mississippi-raised mother’s recipes for much of the menu, so it’s no surprise that the perfectly seasoned chicken and its wonderfully golden, crackling skin seems so true to a traditional Southern take. Then again, the same could be said of the smoked barbecue pork ribs, mac ‘n’ cheese, sweet potato pie, and other hearty, homey fixings available. 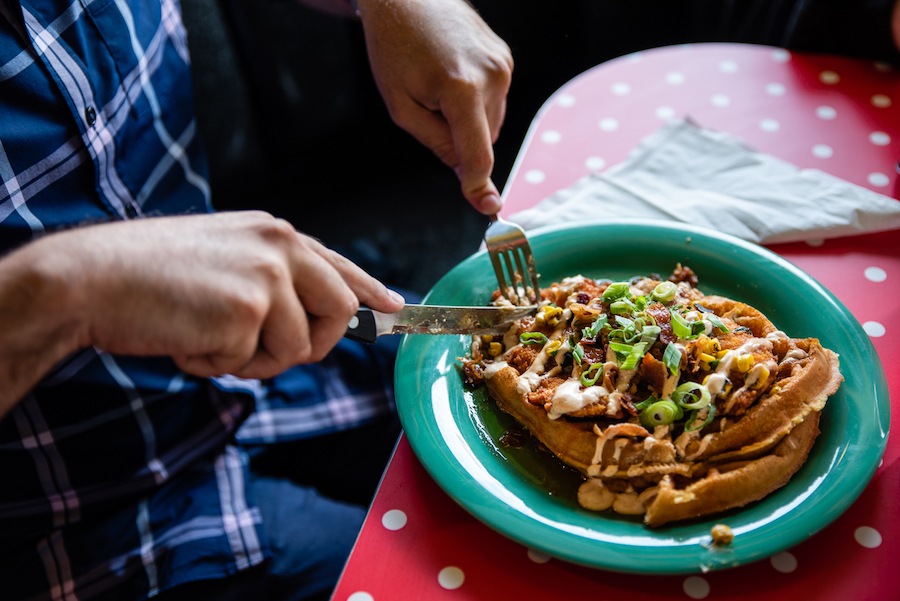 Photo courtesy of the Friendly Toast

New England’s most delightfully retro group of restaurants always puts its own unique twist on breakfast favorites, and the chicken and waffles is no exception. In this case, the singular spin involves a fried-chicken batter that is made with Rice Krispies, giving the meat a distinct texture and super-satisfying crunch. (Though light and fluffy on the inside, the well-structured waffles have a nicely crisped exterior, too.) What really takes things to the next level, though, are the toppings (bacon!) and creative garnishes: fire roasted poblano corn, peppery sour cream made with chipotle and Vermont maple syrup, and hot honey, all served up in a playful diner-style setting.

Owner Darrow Patton cooks mostly Louisiana-style cuisine at this Roxbury fixture. See: the chicken-and-waffle po’boy, his take on the signature sandwich of New Orleans. Patton puts juicy, lightly battered fried chicken in between Belgian waffles that are jazzed up with cornmeal for texture, and designed for dipping in butter and syrup. A standard chicken and waffles plate is available as well, of course, but this po’boy permutation is clearly made with the kind of love and passion that powers all of Maxine’s soul food, from the jambalaya to the etouffee, to the catfish and grits. 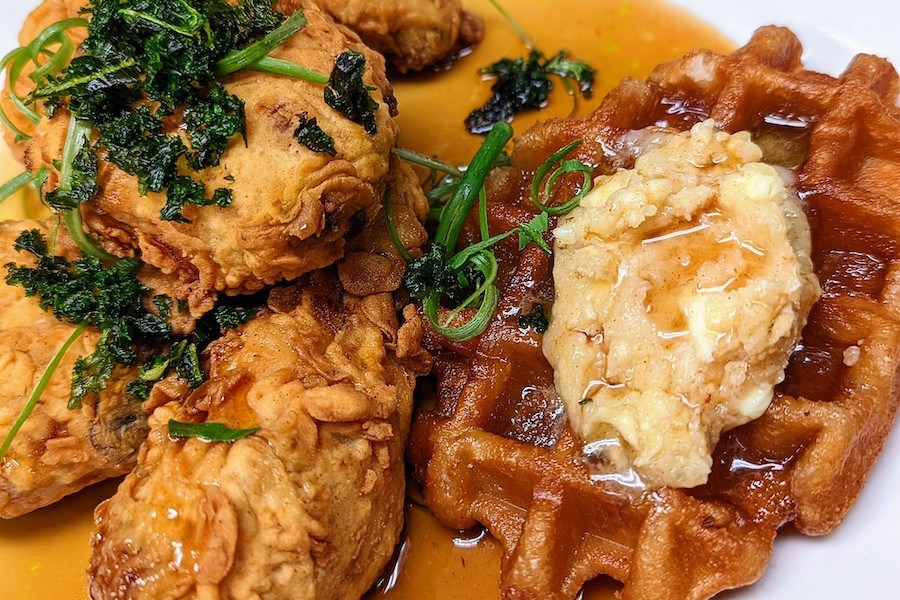 At her spirited global street-food restaurant in South Boston, chef Asia Mei takes cues from Asian and American South cuisines, to name just a couple—and they come together to Best of Boston-winning effect for her phenomenal fried chicken and waffle dish. A thick-cut Belgian waffle smothered in a rustic, homemade cinnamon honey butter sets the stage for the crave-worthy meal; the kicker is crispy-coated fried chicken with tender, falls-off-the-bone meat for swabbing in an umami-rich, sriracha-bourbon “awesome sauce” (which tastes exactly as, well, awesome as it sounds). 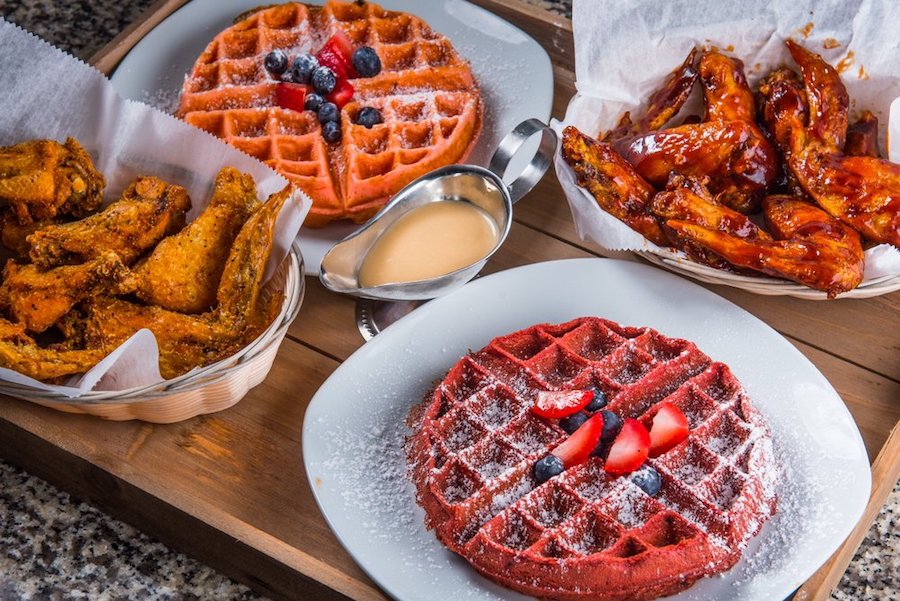 Photo by Neighborhood Kitchen via Yelp

Variety (and maybe some lemon pepper) is the spice of life at this Medford bistro, which offers a wide selection of waffle flavors: There’s the red velvet waffle, for instance, with notes of chocolate and a bit of welcome chewiness, as well as the Asian sesame and scallion waffle, co-owner Joy Phoubaykham’s take on a scallion pancake. Once you make your selection, choose whether you’d like chicken wings or tenders to go with it—and then pick between styles such as Buffalo, Korean, sweet barbecue, chili-lime, and more. Finally, the whole concoction can be drizzled with a maple cream cheese syrup, and (if you like) macerated fruit and whipped cream. The only decision left to make is when to go. 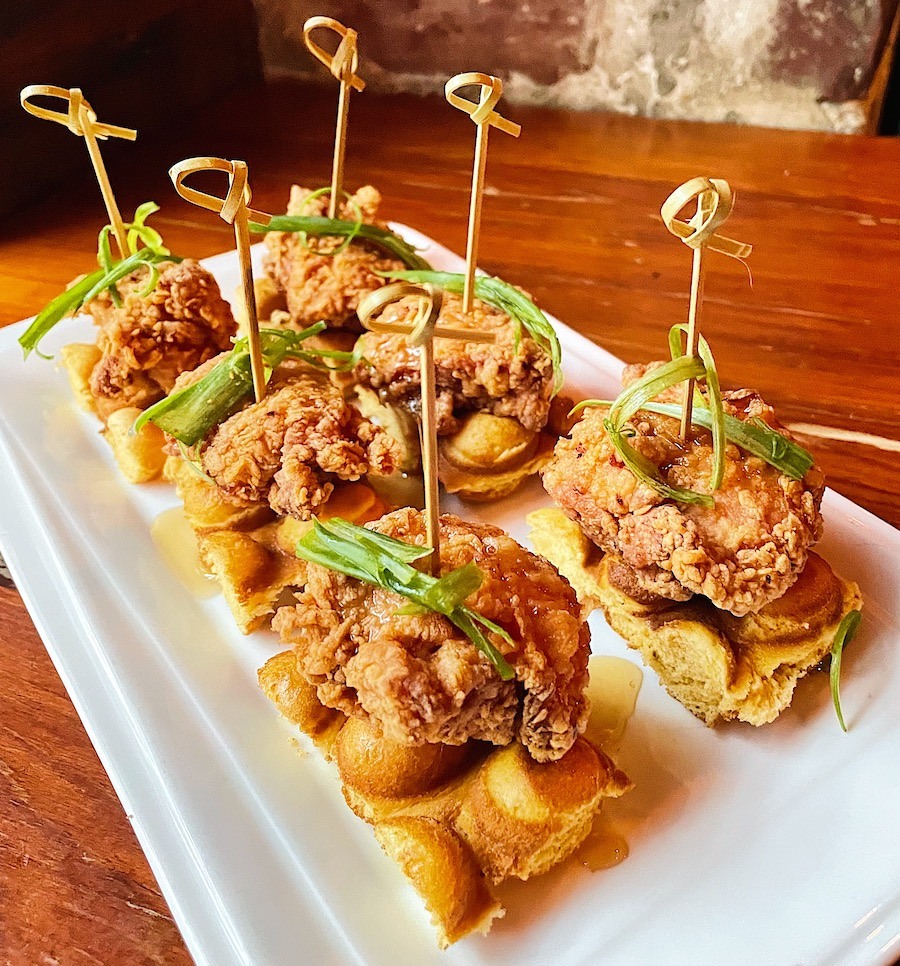 Between the graffiti-splattered walls, upbeat music, and inventive Asian gastropub fare, Chinatown’s Shojo serves up fusion food with flair. Take the chicken and waffles dish, which is divvied up into bite size pieces of juicy, thinly battered thighs and sweet, Hong Kong egg puff-style waffles, which are traditionally served as an ice cream-topped dessert. Here, instead, they are covered with a Chinese five-spice butter and an aromatic syrup with whiffs of orange and juniper berries. High style, indeed.

Comfort food is the specialty of this Somerville stalwart, and the chicken and waffles is a particular crowd-pleaser. The waffle is savory, infused with marjoram, tarragon, and thyme; the very same flour mixture is then used for dredging the buttermilk-soaked chicken, which gets fried at a low temp and finished off in the oven. The result? Meat that is crispy on the outside and tender on the inside, and perfectly complemented by a syrup with kicks of vinegar and Fresno, jalepeño, and red bell peppers.