From beefy spoonfuls of spicy Southern classics to a surprising vegan twist at a Back Bay bookstore. 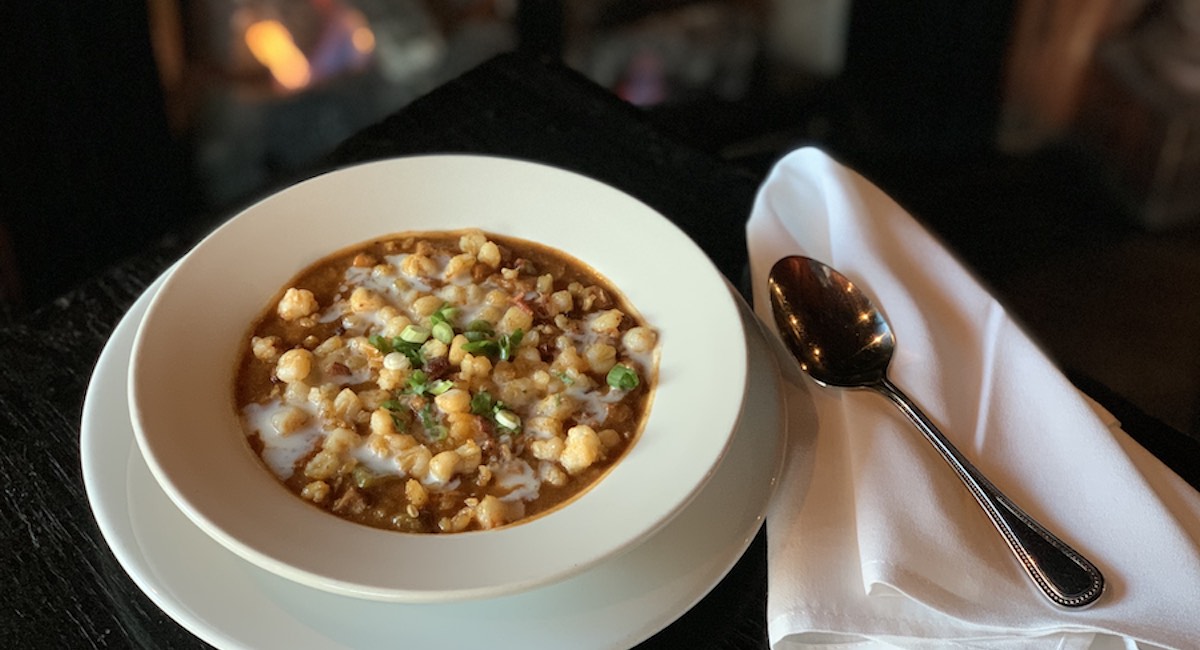 Ah, chili: that perfectly satisfying blend of vibrant spice and peppery warmth, served in a bowl on a cold winter’s day (or anytime, really). Unlike places like Texas, where chili cook-offs are basically a form of competitive sport, Boston may not be famous for the stew—but if you know where to look, you can still find excellent renditions on tables throughout the city. Caution: Hot stuff ahead.

Saunter over to this upbeat Cambridge hangout and file a request for the Texas State Pen Chili. Imbued with an essence that general manager Jonathan Hayes calls “unapologetically Texas,” this Dallas County chili is based on a recipe used in the early 1900s, when tasty chili was considered a point of pride for Lone Star State jailhouses. To be sure, it does not tone down its boldness or its spice for us staid Yankees, accented as it is with a mix of cayenne, chipotle, cumin, and smoked, dried chilies. Its base, made from mirepoix paste and beer, is enhanced with fresh jalapeños and loaded with beef and shaved steak—no beans. If you order delivery, you can also choose from a selection of add-ons that include caramelized onions, goat cheese, blue cheese sauce, and mint-yogurt ranch. And every bowl of chili comes with a buttery side of cornbread, the perfect accessory to this Southern classic.

Although the English-style tavern is well known for its raw bar and pig roasts, take note of its delicately crafted Tigua “Bowl of Red” Chili, which comes steeped in history. The recipe is inspired by the Tigua Native American tribe in Texas, a Pueblo people whose chili is highly regarded for its strong meat flavors and light undertones of corn. Citizen’s take is made with pork shoulder, which is subtler than the customary beef chili, and hominy, a treated, dried corn kernel. This bean-less bowl is a dense, hearty stew, laden with peppers and sweet onions, seasoned with Mexican oregano and topped with a creamy, rich, aged lime yogurt for added smoothness. Citizen owner David DuBois says his take strives for a gentler flavor profile while still preserving the distinctive influence of its roots. 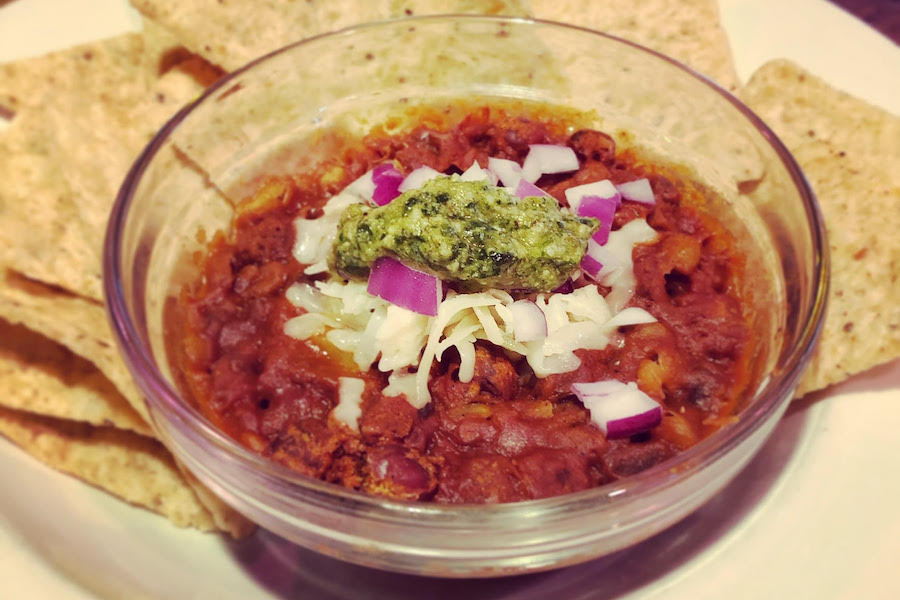 This Harvard Square haunt may be named after the monster depicted in the epic poem Beowulf, but it’s the Impossible Chili that’s sure to slay you. This earthy, vegan iteration melds together five different beans and legumes: kidney beans, chickpeas, black beans, pinto beans, and—this one is the real key—lentils. Robust in flavor and not too hot, with a splash of smoky barbecue sauce, Grendel’s chili has more than enough complexity and depth to make you forget that there is no meat. (That said, this version adds Impossible burger to recreate the texture of a standard ground-beef chili.) Each serving can also be enhanced with a nacho cheese blend, a mixture of Monterey Jack and Cabot cheddar, as well as cilantro pesto. 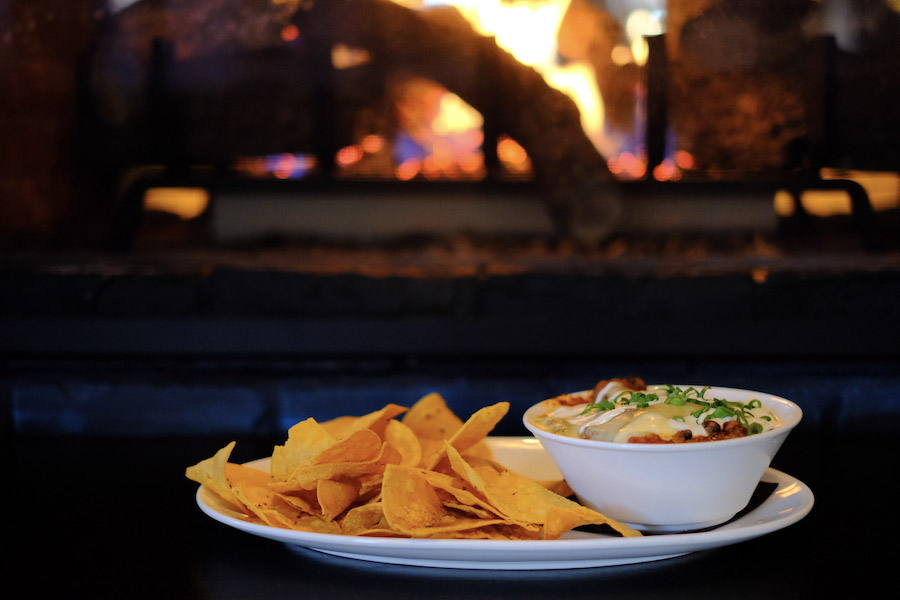 If you’re a chili fanatic of any kind, you’re sure to have heard of Olde Magoun’s Saloon in Somerville. For one thing, although this year’s installment was canceled due to COVID-19, the beloved neighborhood pub has so far hosted fifteen annual chili cook-offs where guests get to vote on the best batch. In addition, the spot’s own Wicked Magoun’s Chili is legendary—sweet, spicy, and smoky. The recipe brings together seared steak, chunks of hamburger, Mexican chorizo, and pulled pork in a Heinz chili sauce base, then tops it all with shredded pepper jack cheese, scallions, and a lime crema. The result has the consistency of a thick stew and comes with nacho chips that are fried and seasoned with Magoun’s own blend. 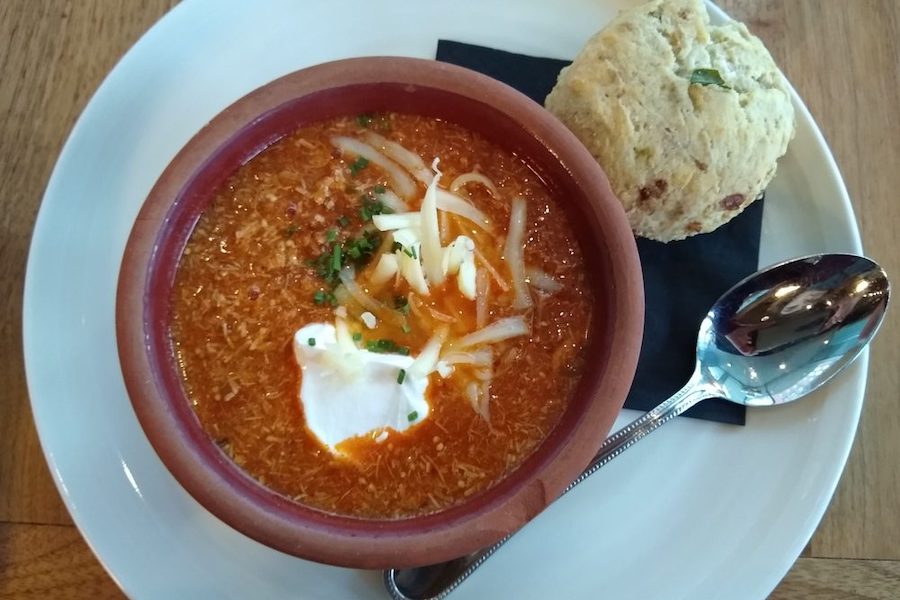 Named after executive chef Sarah Wade’s hometown in Oklahoma, Stillwater serves up the flavors of the heartland—with a twist, of course. See the Smoked Chicken Chili, which uses the dark meat of the chicken thigh and offers it a light kick with cayenne, paprika, and chili powder. It also incorporates tomatillos, tomatoes, and a bit of lime juice—all of which contribute to a faint trace of welcome acidity—and arrives topped with New England cheddar, chives, and sour cream. Make sure you save room for the accompanying side: a delicious blue cheese and thyme biscuit, perfect for dipping or crumbling into the chili. Wade says that she drew inspiration from her upbringing, when her mom would bake biscuits every morning.

Stroll into Newbury Street’s long-running independent bookstore and comb the shelves for a good read – but don’t forget to grab a cup of chili from the on-site café. The recipe was actually one of the first items added to the menu when Trident decided to expand into a restaurant in the ’80s, and it’s a timeless variation that is entirely vegan, dairy free, and gluten free. It gets its body from the key ingredients of cashews and kidney beans, and you can request jalapeños to top yours as well. (There’s the option to add a variety of cheeses, including Swiss, gouda, dill Havarti, and a cheddar-mozzarella blend.) So go ahead: Grab a bowl, browse around, and pick up some Kafka reads while you’re at it.

With its retro, 1950s-style décor, Trina’s is a go-to destination for throwback comfort food—and its house-made chili, in particular, is sure to stop you in your tracks. This version combines ground beef with spicy Italian sausage and black beans, and it’s seasoned with brown sugar, paprika, cinnamon, black pepper, and cumin. It also gets a kick from the unexpected contribution of coffee, ketchup, and Pepsi, mixed in with Worcestershire sauce, molasses, and sherry vinegar. Thick and chunky—thanks to a medley of red bell peppers, poblano peppers, Spanish onions, and garlic—it comes topped with shredded cheddar and pepper jack, as well as a dollop of sour cream. And though it’s truly delicious on its own, you can also add this iconic staple to Trina’s chili cheese fries and chili cheese dog, too. 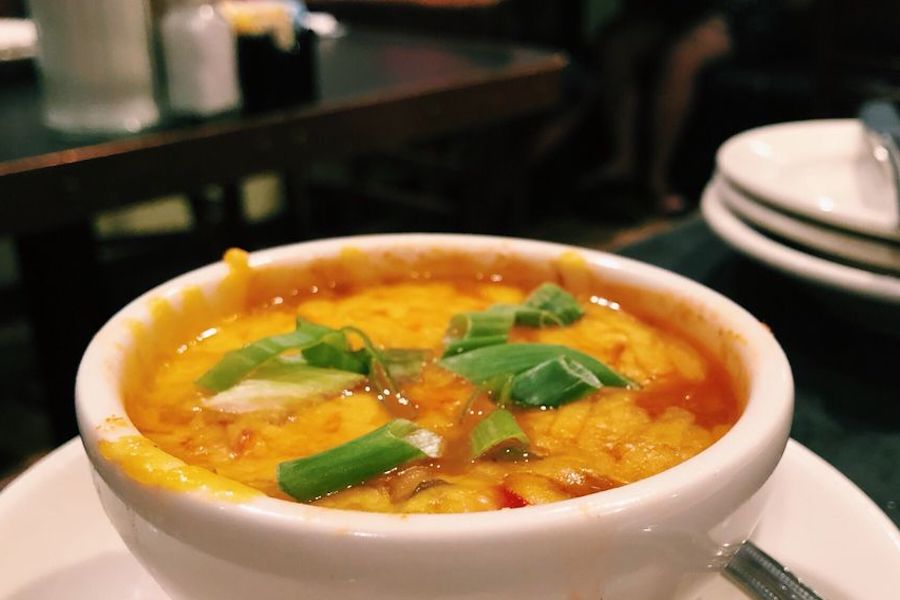 Chili at Zaftigs. / Photo by Anna X. via Yelp

When you drop by this Jewish deli in Brookline, you’ll find that Zaftigs specialties such as matzo-ball soup and loaded latkes certainly shine. But the turkey chili, here assembled with beef brisket, is another heart-warming way to fight the cold of winter. The ground turkey is browned in chicken fat and flavored with Kosher salt in a mélange of Tabasco sauce, red wine, and Sam Adams beer; it mingles in the bowl with black beans, red peppers, chili salt, and tomatoes. A family recipe that has been passed down for generations, this savory chili is just a bit spicy, and topped with melted cheddar cheese and scallions. A pint of it will surely help you get through quarantine times and will, as chef Jose Gutierrez says, nourish the soul.