Where to Find the Best Cupcakes in Boston Right Now

Here's where to satisfy your taste for the sweet life.

Once upon a time, the cynical might have argued that gourmet cupcakes were just another food fad. And sure, there was an explosion of twee cake bakeries for a while there. But designer cup-sized confections are popular for good reason: It doesn’t need to be your birthday for you to treat yourself to cake. And in Boston, you don’t have to search hard to find your fair share of creatively flavored and beautifully decorated options. Look no further than these bakeries, cupcakeries, and sweet shops for your next sugar fix. 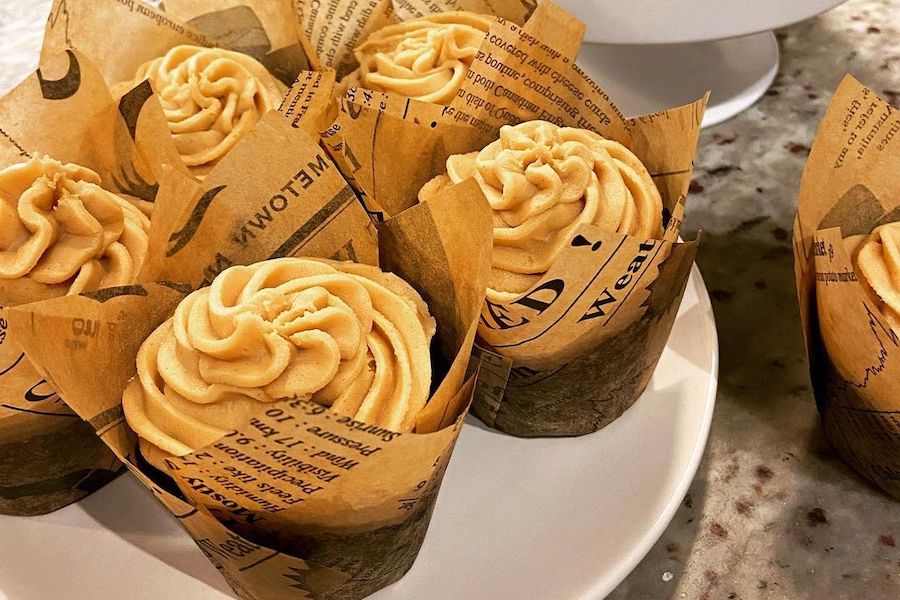 Note: Caked Boston is slated to reopen in June 2021.

Looks aren’t everything. Sure, Caked Boston’s bite-sized cupcakes are just as visually appealing as they are delicious. But the real draw to the online-only storefront—which offers home delivery, though you can also catch occasional pop-up appearances around town—is baker Lauren King’s whimsical flavors, which can venture far from the traditional offerings at other neighborhood bakeries. You can’t go wrong with the Chicken and Waffles cupcake topped with maple syrup frosting and a mini waffle, the Basic Chick with espresso vanilla bean frosting and caramel sauce, or any of the other creations inspired by s’mores, cannoli, and cinnamon French toast, to name a few. 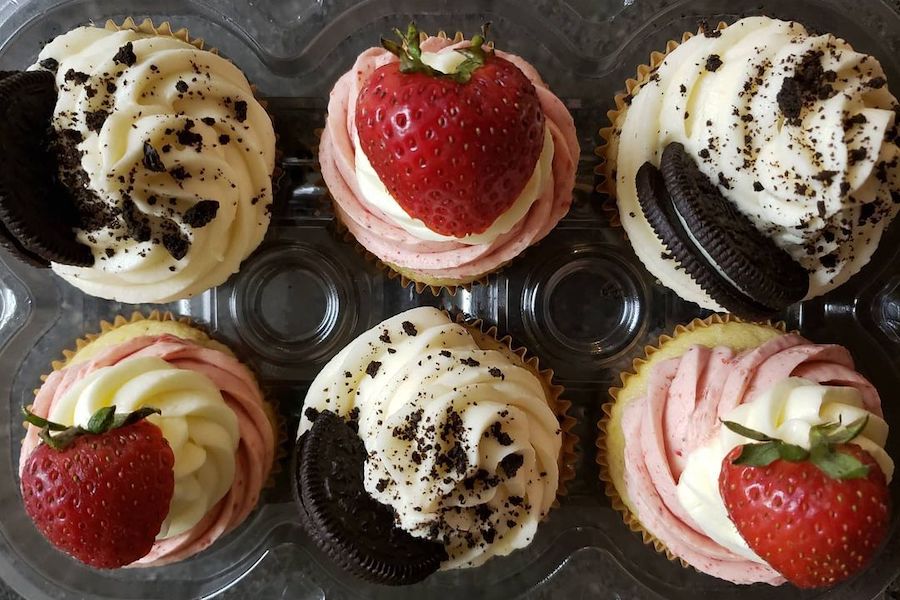 Feel like honing your cake-decorating skills? In addition to fully finished cupcakes in signature flavors that can be ordered by the dozen for pickup, local delivery, or nationwide shipping, this entirely nut- and peanut-free operation offers make-your-own kits: a dozen cupcakes of any flavor, two frostings, and three toppings for you to make your own decadent desserts at home. What flavors to try? Consider peach cobbler with cream cheese frosting, caramel apple (Madagascar bourbon vanilla cake filled with caramel-soaked apples) or chocolate espresso topped with strawberry garnish. 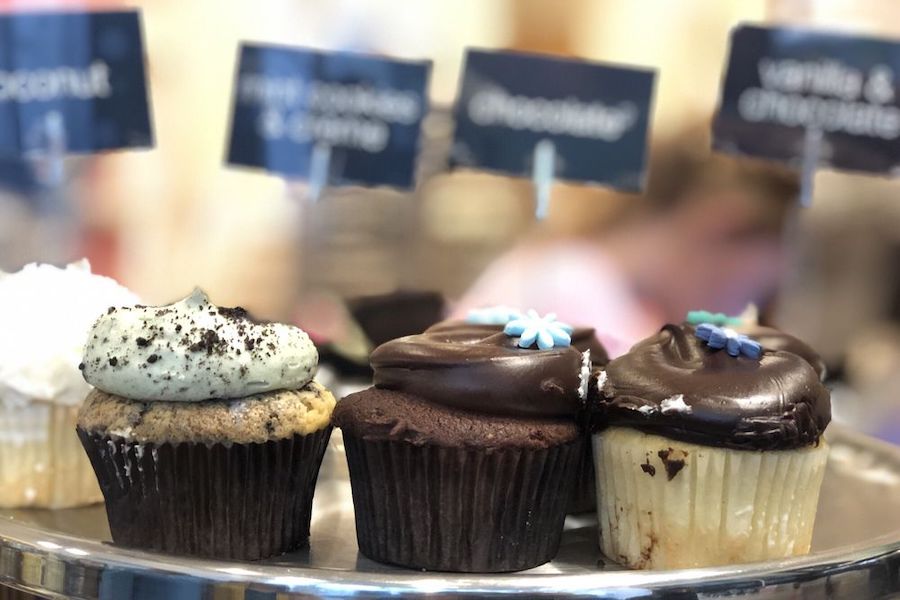 With six locations on the East Coast, Georgetown Cupcake isn’t a Boston-born bakery. But what it lacks in hometown roots, it makes up for in its delicious treats—and star power. Back when sister-owners Sophie LaMontagne and Katherine Kallinis first launched Georgetown, the bakery was the subject of a TLC reality show, DC Cupcakes, on which they were often seen creating large-scale cupcake installations for events. Although you won’t be able to pick up an Eiffel-sized cupcake tower on your next trip to Newbury St., you can get cupcakes topped with Georgetown’s signature swirled frosting and minimalistic decorations. Even though it’s a small chain, Georgetown’s simple flavors—such as vanilla, birthday cake and Chocolate Squared—do in fact live up to the hype. 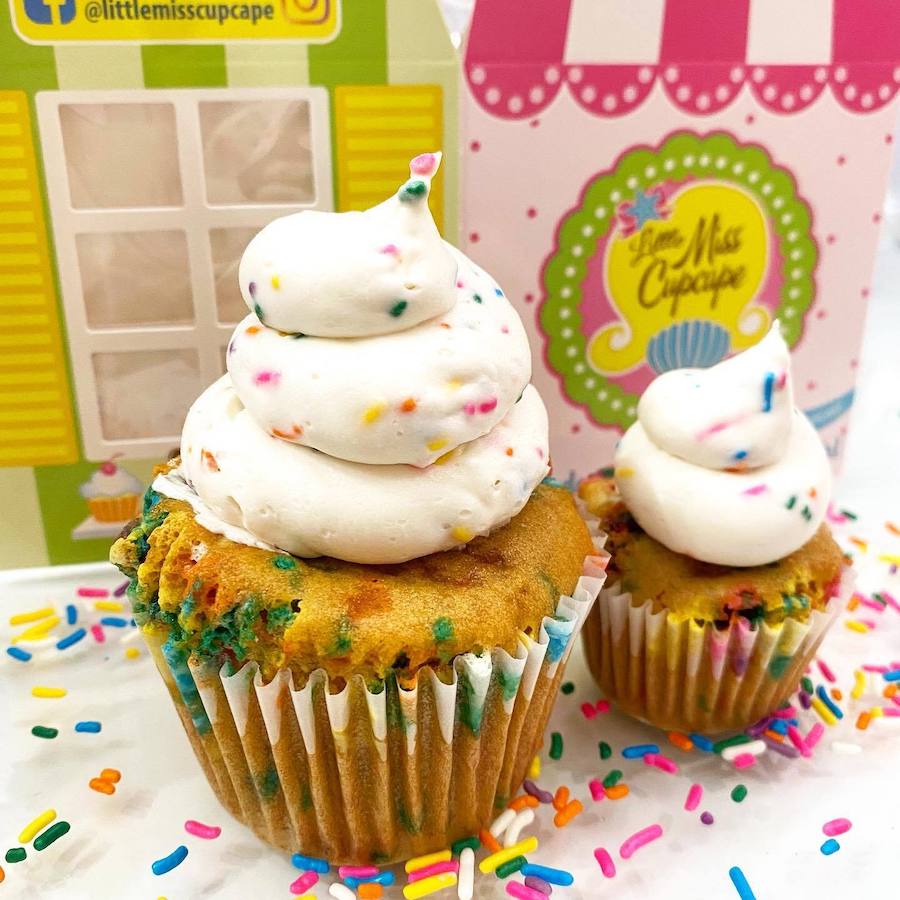 Founded on Cape Cod (the name isn’t a typo), Little Miss Cupcape opened the doors to its second location on Newbury Street in Boston in 2019. Its knack for beachy keen puns and wordplay extends to the creative cupcake flavors too, which range from Buoy Buckeye, or chocolate cake topped with peanut butter buttercream, to Lemon Lighthouse and Ships Ahoy Chocolate Chip Cookie Dough, which are exactly what they sound like. Bonus: The candy-colored store offers full and mini, bite-sized versions of its sweets made from scratch with real butter, cream, coco, sugar and pure vanilla.

Lyndell’s has been open in Somerville since 1887, baking with the same century-old recipes, so we think it’s fair to say they’re doing something very right. Here’s what: Although the bakery has cycled through different owners over the course of its history, the quality of its products has remained the same. Although elegantly decorated with a pile of frosting, the flavors are simple—you might find golden cake with strawberry, orange, or chocolate frosting, as well as more specialty flavors like carrot cake and red velvet. Lyndell’s may have opened before the invention of the modern car (as the bakery likes to boast), but its baked good selection is far from outdated. 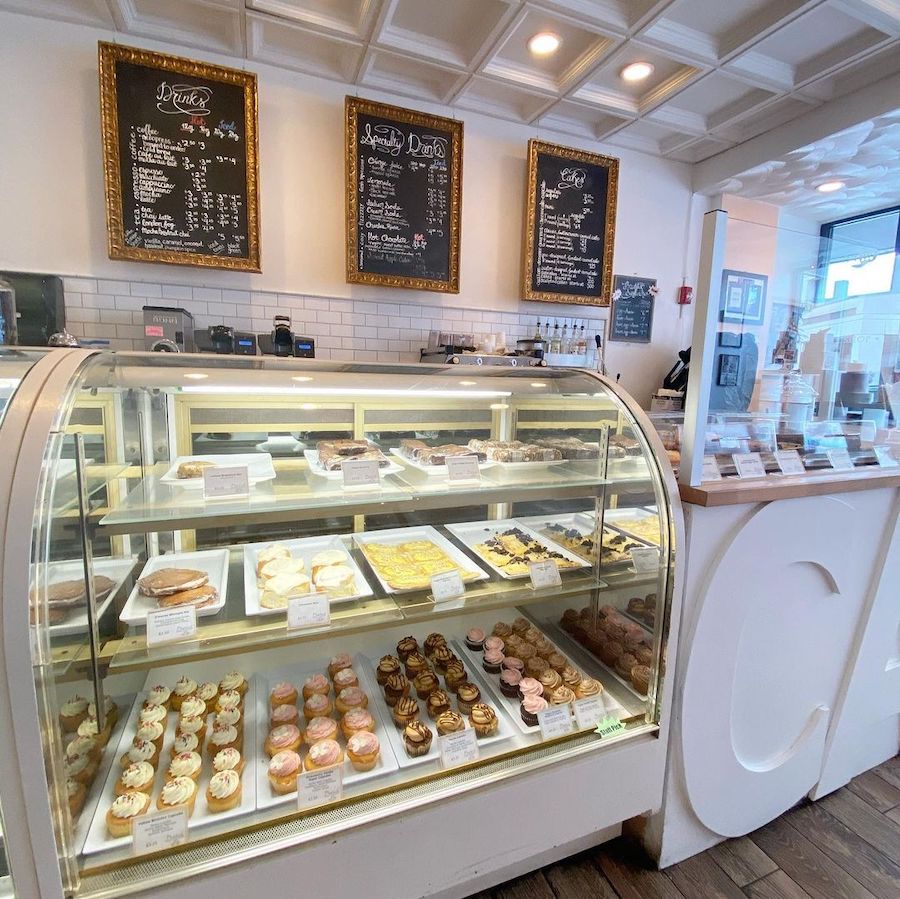 Every treat baked at Oakleaf is made in-house from scratch using top-shelf ingredients—which is exactly why everything tastes so good. You can stop by the Symphony Hall-side storefront for a variety of pastries, plus hand-ground coffee to accompany the sweets, but the star attraction just may be the ever-changing selection of cupcakes. Oakleaf bakes a lot of custom cakes, so while they always offer customers three main cupcake flavors—yellow, red velvet, and chocolate—they also use the leftover batter from their special projects to create unique flavors each week. What’s on the menu right now? Whether it’s piña colada, strawberries and champagne, or vegan cookie dough, you’ll just have to stop in and see for yourself.

Nestled in the heart of the South End, this bakery has become a neighborhood mainstay since it first opened over 15 years ago. While it boasts a café menu filled with burgers, soups and salads, the baked goods are where the Buttery truly shines—and in keeping with the canine-friendly nature of the neighborhood (note the pooches that are usually leashed up outside), the signature flavors are all named after the staff’s many dogs. (Cue the collective aww!) In fact, a portion of sales is even donated to animal rescue organizations. Stop by to try the Milly Vanilla, Dexter Salted Caramel, or the Marlowe Red Velvet. 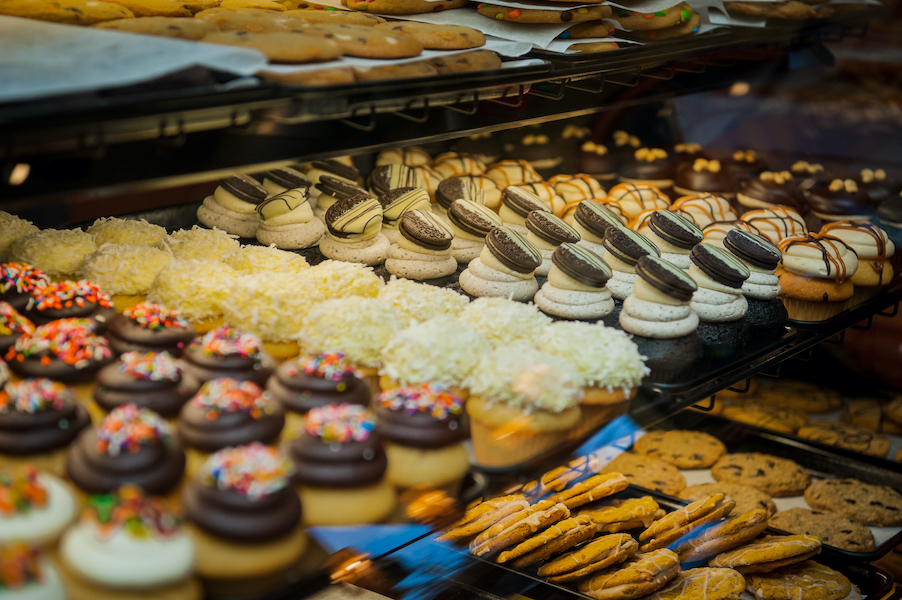 Sometimes you don’t need a reason to treat yourself—just an excuse. Sugar Baking Co. knows that. While the bakery offers a wide variety of cupcakes that are perfect for special occasions (or, you know, a last-minute potluck contribution), these flavors will beckon you back anytime you simply feel you deserve a little sugar-filled self-care. At the top of your list should be the caramel cupcakes (caramel cake with caramel inside and on top), Oreo cupcakes topped with an entire white chocolate-dipped Oreo, and bewitching Black Magic cupcakes that are filled with chocolate pudding and dipped in chocolate ganache. Don’t feel like driving over? Sugar Baking Co. delivers to Boston and surrounding towns, too.

Operating out of Commonwealth Kitchen, a shared facility for small food businesses in Dorchester, Sweet Teez doesn’t have its own storefront—but trust us, it’s still worth placing a custom order. Everything here is nut-free, so those with allergies will no longer have to worry about their lack of dessert options— which is exactly what inspired Sweet Teez owner Teresa Thompson Maynard to bake up her business in the first place. The only issue here is choosing which decadent flavor to get, whether traditional varieties like vanilla and lemon or more specialty options such as bourbon banana cake with bacon. (Um, yes please!). It’s hard to decide, but that’s a pretty good problem to have.

Although Sweet Tooth is known for its elaborately designed custom cakes, the Southie bakery’s cupcakes are just as well-decorated—and just as delicious, even in their downsized form. Signature falvors include chocolate berry cream, filled with raspberry buttercream, topped with ganache and a chocolate-covered strawberry; the Make a Wish, a chocolate or chocolate and vanilla marble cake topped with a fortune cookie; and chocolate truffle, topped with (you guessed it) a full-size chocolate truffle. 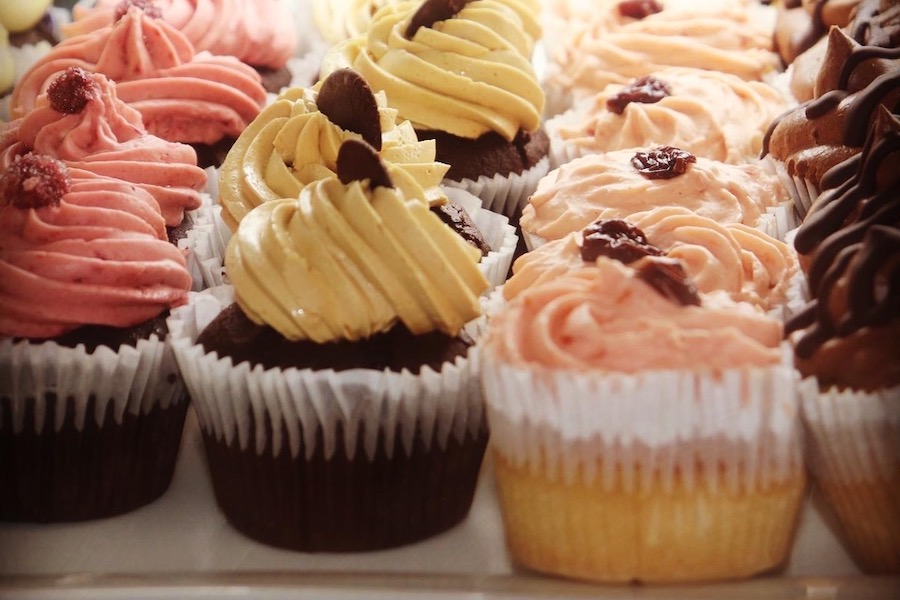 Violette is one of a small handful of totally gluten-free bakeries near Boston, but doing without wheat doesn’t mean doing without big flavor—and though there’s an extensive lineup of delicious baked goods on offer, the cupcakes take the cake (pun intended). The flavors, all made using local, organic ingredients, change often. But be on the lookout for creative favorites such as angel food cupcakes filled with lemon curd and topped with rose cream, vanilla cupcakes with coffee-Kahlua-cocoa Italian buttercream, and their grain-free and dairy-free “flourless cupcake.”