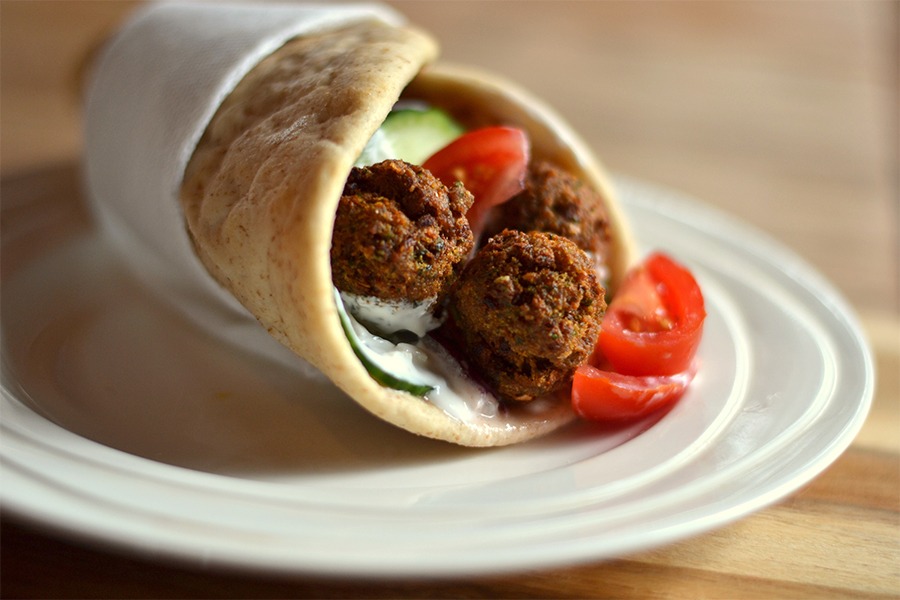 Many cultures have laid claim to the invention of falafel—from Egyptians to Greeks to the Lebanese—and as a result, our world has been blessed with several tasty versions of these wondrously delicious vegetarian fritters. However, one element remains relatively consistent across all variations of falafel: texture. Formed from chickpeas or fava beans, perfect deep-fried falafel balls tend to have a crispy exterior and a pillowy soft interior. Whether you prefer them wrapped in warm pita pockets, on a bed of lettuce slathered in tahini dressing, or cold out of the fridge and dipped in garlic sauce, there are plenty of shops throughout the Boston area that offer innovative takes on the classic Middle Eastern street food. Below you’ll find 11 of our favorite options for swift take-out operations or leisurely sit-down meals that last until closing time.

Even if you’re throwing together a last-minute celebration for a group of 15 people, Anatolia can cater the kind of elaborate Mediterranean feast you’re seeking. Lit up with string lights, the streetside outdoor patio is the perfect venue for sipping boozy cocktails and passing around mezze plates of falafel and cacik (Turkish cucumber-yogurt sauce). During lunch hours, Anatolia wraps its chickpea-based fritters in homemade flatbread, stuffed with Turkish shepherd’s salad, tangy yogurt sauce, and your choice of hummus, Greek eggplant salad, or traditional baba ghanoush. Day or night, though, Anatolia’s falafel balls are a must-order.

Aside from being a magnet for hungry Northeastern and Berklee College of Music students on tight budgets, Boston Shawarma is a hidden gem with great falafel. The eatery uses ground fava beans and chickpeas in its recipe, giving the falafel a nutty depth that nicely complements the peppery taste of the fresh parsley, coriander, and cumin thrown in the batter. The crispy creations come wrapped in a warm pita with standard toppings such as lettuce, pickles, and onion along with a squeeze of garlic and tahini spreads. You have to be pretty hungry to get through this monstrously big sandwich in one go, but fear not: If you can’t finish your meal, it’ll hold up in the fridge until you work up your appetite again.

This cozy Lebanese restaurant on the edge of Davis Square can easily transform from a family-friendly gathering space to a date-night spot. The faux brick walls and beaded lanterns hanging above the tables give Café Barada an ambient glow, which matches the warmth of the food served there. The falafel, in particular, is seasoned with earthy spices that are only enhanced by the tanginess of creamy tahini sauce and bright pickled vegetables. You can order a plate of delicately crisp falafel on the side of any entrée, or opt for a full plate with a side of toasted rice pilaf. Whether you’re dining one-on-one or with a crowd, these falafels need to be on your table.

The team behind this lunch spot in the heart of Jamaica Plain certainly knows how to make excellent falafel, but the real fun begins when it comes to customizing your sides and sauces. After choosing your base (roll, plate, or salad), you’ll have to settle on a veggie combination. Fortunately, Café Beirut’s menu includes three styles that vary depending on the base you choose. For the roll, we recommend the “Beirut” option stuffed with crunchy romaine, cucumber, kalamata olives, pickles, and fresh mint sprigs. When deciding on a plate, meanwhile, start with a base of Lebanese moujadara (lentils, caramelized onions, and rice), and top it off with the “Garden” veggies, which include pickled turnips and hot peppers for a fiery kick. No matter which falafel dish you order, though, make sure to get at least two different kinds of sauce for dipping: The luscious garlic whip is a classic, but the sweet pomegranate molasses and spicy harissa sauces prove there’s truth in the age-old “opposites attract” adage.

Calling yourself royalty in any context is a bold claim, but in the case of Kadhim Alzubaidy’s growing falafel empire, the title of “Falafel King” is warranted. The second you step inside one of Alzubaidy’s two downtown locations, a staff member greets you with a free fresh chickpea fritter dipped in tahini sauce before you look over the menu. After tasting this sample, though, you’ll most likely turn your attention to the falafel dishes. If you’re craving something hearty, go for the plate with four falafel patties and a crunchy cucumber-and-tomato salad over a bed of saffron rice. Otherwise, opt for a salad plate with falafel, zesty tabouleh, and a generous dollop of creamy hummus. Both options are under $11, so if you wanted to think ahead, you could devour one for lunch and save the other for dinner. If it was up to us, we’d give you some sort of falafel knighthood for your planning skills—but we’ll leave decisions like that up to the Falafel King. 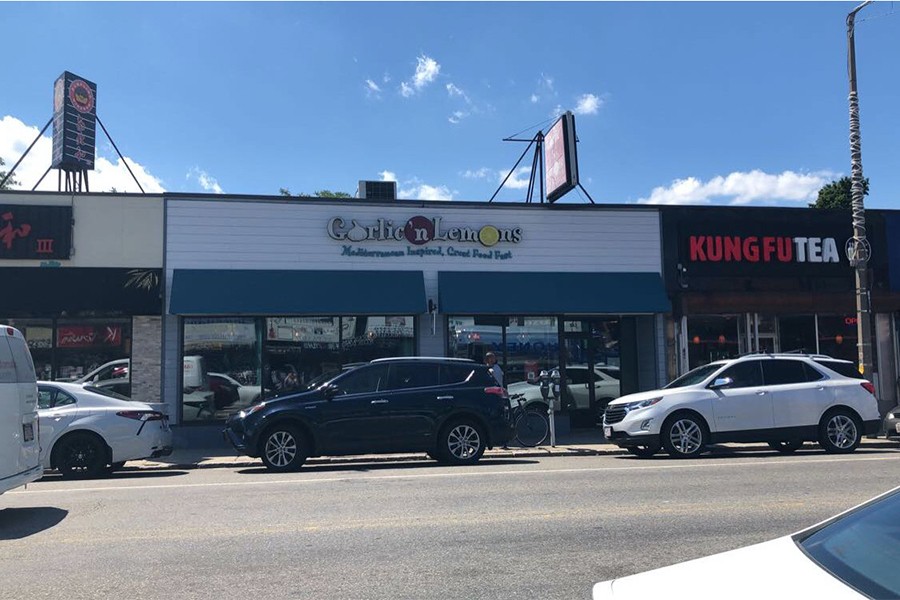 Inspired by the flavors of Armenia, Lebanon, and the Mediterranean coast, Mardig Helvadjian and his mother Rosie (a.k.a Mama Rosie) opened Garlic ’n Lemons back in 2010 with the intention of introducing Brookline to homestyle Lebanese-Armenian cooking. Mama Rosie’s legendary lemony tabouleh salad has secured a cult following over the years, but her crispy cumin and coriander-flavored falafel balls are the protein of choice when it comes to Garlic ’n Lemon’s veggie plates. For just under 10 bucks, the falafel pita rollup is another fantastic way to enjoy Mama Rosie’s fried chickpea croquettes. Because the team slightly crushes the falafel balls before rolling them into the thinner pita bread, bits of mashed chickpea dominate every bite along with your choice of vegetables and sauce (try the smokey GarliQue). If you’re feeling decadent, ask to add some French fries to the rollup for an extra satisfying crunch.

The mother-daughter team behind this vegan Egyptian eatery began selling their meatless takes on classic street foods at farmer’s markets and pop-ups around Boston before setting up shop in Somerville. While Sahar Ahmed and Dina Fahim’s famed rice, lentil, chickpea, and pasta koshari dish is adapted from an old family recipe, their fava bean-based falafel balls are made to emulate authentic Egyptian street cart fritters—each seasoned with an abundance of parsley and cilantro that gives them a lush green interior. While the fluffy falafel balls are delicious on their own, Koshari Mama’s falafel wrap swaps typical pita for a puffy whole-wheat Egyptian flatbread called aish baladi. Stuffed with arugula, tomatoes, cucumber, onions, and generous squeezes of tahini and creamy garlic sauces, this wrap is an edible ode to the falafel vendors that crowd the streets of Cairo.

Have you ever found yourself alone at a popular lunch spot and then suddenly a line starts to form when you walk out the door? Noor Grill is the kind of place where this strange phenomenon is a common occurrence. If you’re on the lucky end of that scenario, you’ll be able to grab yourself a piping-hot falafel plate in under five minutes. Otherwise, you’re looking at a 20- to-30-minute wait. Our advice? Either get there before the crowds start showing up around 11 a.m., or enjoy a late lunch around 2 p.m. Either way, you’ll be rewarded with five golf ball-sized crunchy falafels that have a distinctly chewy interior, a side of rice or fries, and lemony baba ghanoush (if you’re looking to shake up your usual dip order). 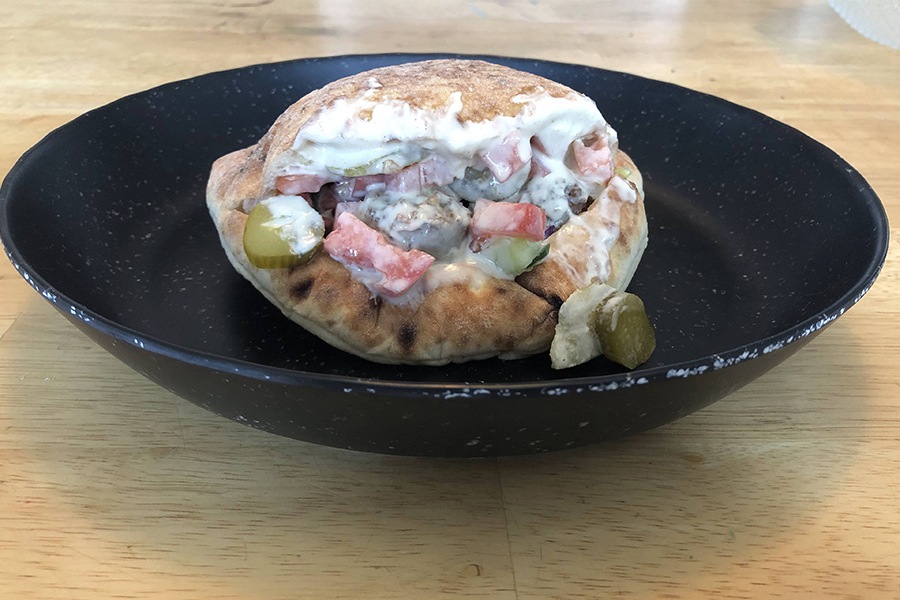 While there’s nothing wrong with a messy pita wrap that starts collapsing after one bite, we’re convinced Rami’s must have enlisted engineering students from MIT to create one of the most durable bread pockets we’ve ever encountered. Seemingly defying all laws of physics, Rami’s pita sandwiches remain intact despite containing thick Israeli pickles, lots of crunchy vegetables, a fat dollop of garlicky hummus, and several mini falafel balls drizzled with tahini and (if you so choose) homemade hot sauce. The bite-size golden-brown falafel morsels are not only efficiently designed, but also bursting with flavor thanks to a blend of coriander, cumin, garlic, and onions. After being in business for more than 30 years, though, it’s no surprise that Rami’s has its falafel pita-wrap recipe down to a science.

This snug falafel shop is a late-night haven in an otherwise quiet stretch of Somerville. On Thursdays, Fridays, and Saturdays, Sam’s is open until 2 a.m., so if you’re craving a heartier midnight snack, the restaurant’s hefty falafel sandwich wrapped in fresh pita will certainly satiate your appetite. The slightly flattened shape of the parsley, onion, and garlic-laden falafel balls helps evenly disperse a bit of crunch into each bite. Complemented by the vinegary kick from the pickled turnips and the rich sesame flavor of the house-made tahini sauce, Sam’s falafel sandwich is the perfect post-bar crawl feast.

While South End Pita’s décor is otherwise nondescript, you’ll probably be curious about the long mural depicting adobe homes that sits above the counter. The artwork serves as an eye-catching reminder that this counter-service joint specializes in the warm spices and flavors of Moroccan cuisine. The moment you step up to order, a wave of fragrant garlic and paprika will start tickling your nose. While you may be tempted by South End Pita’s succulent lamb shish kabobs, we strongly encourage you to consider the fantastic falafel patties. Seasoned with garlic, sumac, and paprika and double-fried in olive oil, the patties are uniquely aromatic and maintain the perfect crispy-to-fluffy ratio. Still not convinced? Try dunking the chickpea fritters in the restaurant’s thick garlic sauce. On that note, it’s probably a good idea to order some extra falafel on the side (for continued research, obviously).