From all-beef wieners with classic toppings to a super-creative octopus dog, here are our favorite franks right now.

Now that Fenway Park is full of fans again (hurrah!), we’re thinking about our real favorite reason to hit a Red Sox game: the excuse to eat as many hot dogs as humanly possible. Guess what, though? A grilled frank tastes just as good via takeout as when you’re watching the action on ESPN—and even if you’re not a sports lover, enduring a hot dog-free summer would be a major foul. So here are some of the best spots around Boston to find ’em, from German frankfurters in a bretzel roll to Brazilian-style dogs in a hot-pressed sandwich, to straightforward selections from classic New England snack shacks. 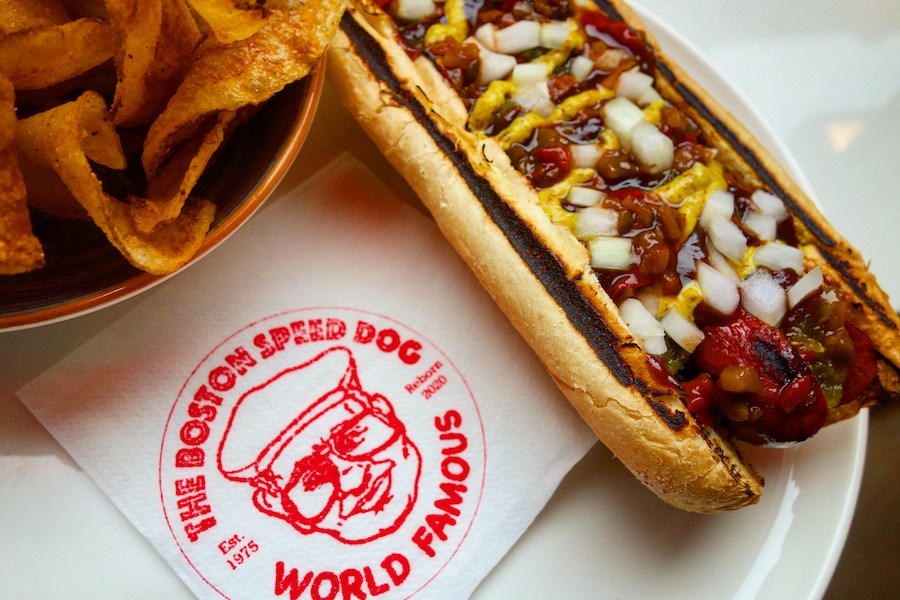 The Boston Speed Dog (at Troquet on South)

Just ask Hollywood: Everyone loves a reboot. Especially when the revival is a beloved hit like the Boston Speed Dog, a hot dog cart that served up some of the city’s most-desired franks from 1975 to 2013. Last year, Troquet on South owner Chris Campbell inherited the recipe and brought it back at—of all places—his French-leaning restaurant in the Leather District, generally better known for its acclaimed wine selection. Now, though, you can pair something spectacular from the cellar with a low-down-and-dirty, half-pound dog covered in onions, mustard, relish, and that signature spicy chili. (It’s also offered as takeout, if you don’t feel like putting on a collared shirt.) 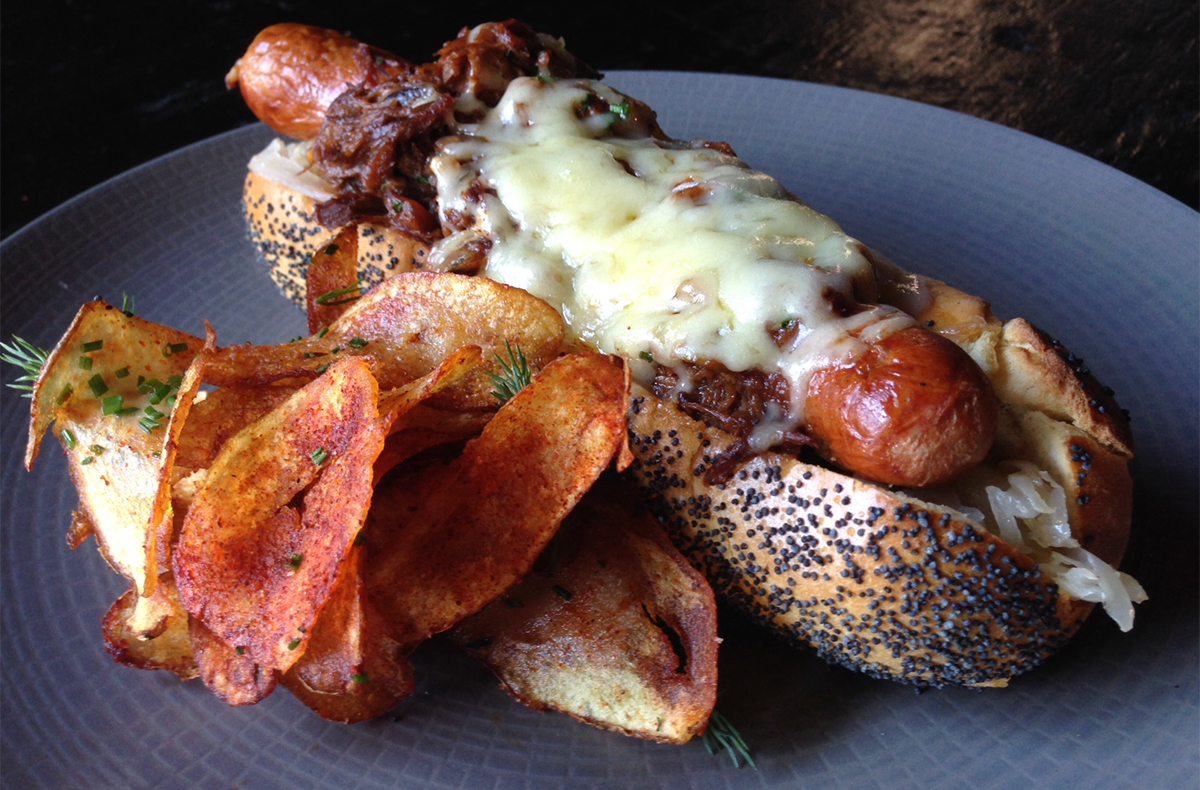 The Brondog. / Photo courtesy of Bronwyn

Back when he was plying his fine-dining skills at his now-shuttered restaurant T.W. Food, it would have been hard to imagine that chef Tim Wiechmann would wind up with a hot dog as a signature dish. But the Brondog, a staple of his Bavarian-inspired restaurant Bronwyn since 2014, is—to be frank—a now-classic. The foot-long frankfurter sits in a bretzel roll and is topped with chili, cheese, ketchup, and mustard; crispy bratkartoffeln potatoes come on the side. It’s available a la carte for takeout, or as a choice on the three-course prix fixe menu that Bronwyn currently offers in its dining room and biergarten. 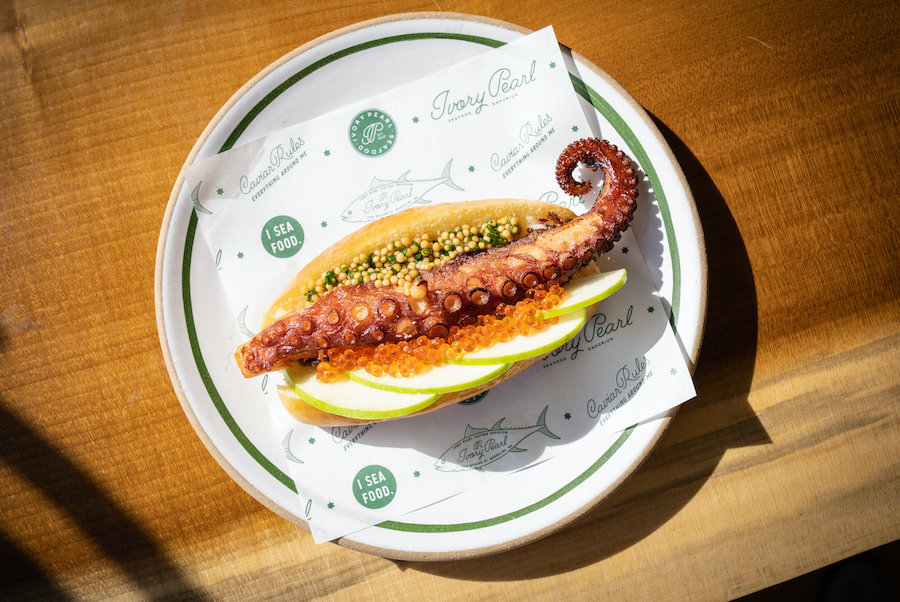 Expand your hot dog horizons by reaching for the Tentacle Hot Dog at Ivory Pearl. The shiny, still-newish Brookline spot specializes in seafood for pairing with fine wine-inspired cocktails, and one result is this gorgeous piece of braised octopus, sidled inside a Japanese milk bread roll with trout roe, sauerkraut, mustard, and sliced green apple. 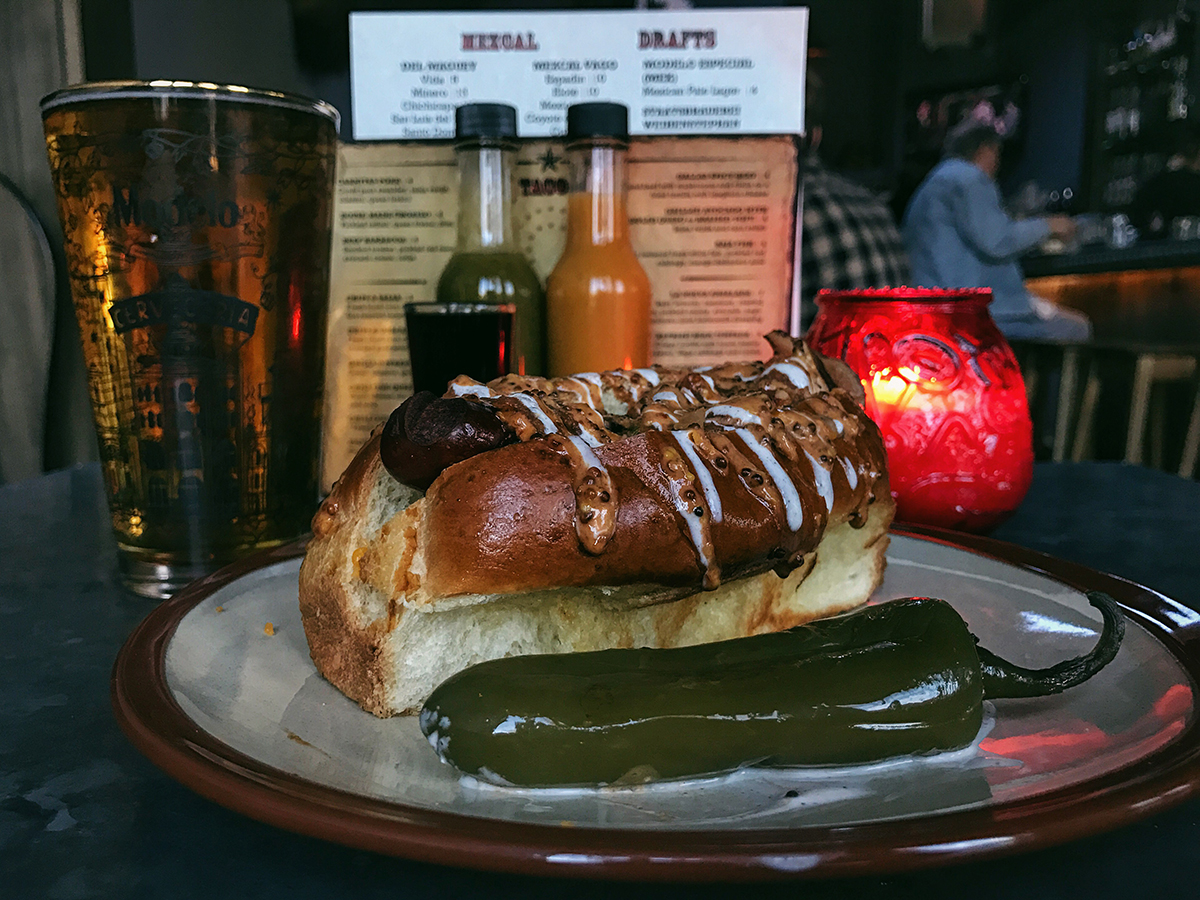 The titular tacos are the main thing, of course, but devotees of this pair of eateries in Allston and Cambridge know that the menu’s lone dog is a star in its own right. The superlative Mexican Dog is loaded with roasted salsa, refried beans, chipotle mustard, and longhorn-style Colby cheese, and—pro tip!—it tastes particularly great with a tequila cocktail like the Rosita, which adds to the mix Aperol, sweet and dry vermouth, and ever-so-savory mole bitters. 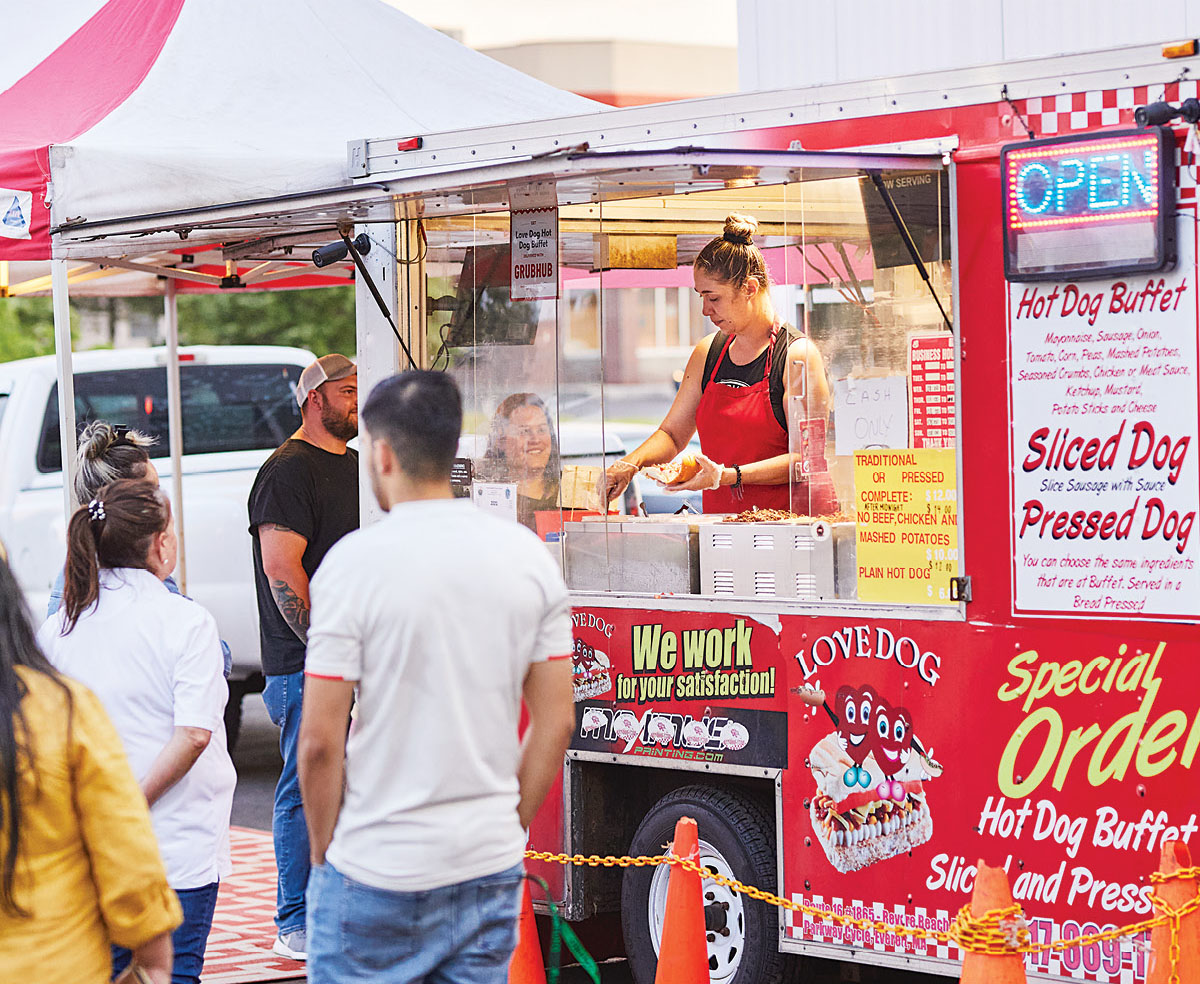 Not only is it our latest pick for the best food truck in Boston, but this creative hot dog cart—serving well into the late-night from a parking lot in Everett—also makes what might be the some of the best drunk-food in the Boston area: Brazilian-style boiled hot dogs receive mounds of toppings from a buffet-style assortment, which includes unusual options like potato sticks, peas, mozzarella cheese, and bacon-bedecked bread crumbs. Coolest of all, you can then get your hot dog pressed hot, panini-sandwich style. Take note, though, Love Dog isn’t the only spot specializing in Brazilian-style dogs: If you’re slightly west of the city, you can head to Natick’s new hit, Hot Doogy, for more overloaded franks like the Linguiça Doogy, a smoked sausage buried under olives, potato sticks, and jalapeños.

Feel free to bring your pooch to the spacious patio at Quincy’s Pour Yard, which makes a point of pointing out that actual dogs are very, very welcome. On the hot dog front, meanwhile, you’ll find a menu of “hot dog flights”—sample-ready variations offered at six bucks a pop— that includes the Atomic Dog with Buffalo sauce, blue cheese, and celery; the Tropical Dog with sweet salsa, jalapeños, and Sriracha sour cream; and the Reuben Dog with sauerkraut, shredded Swiss cheese and Thousand Island dressing. Wash ’em down with a margarita flight, or at the very least, a pour of cold craft beer.

Whether you want a meaty hot dog or an equally awesome vegetarian version, you’ll find it at one of the two Saus locations. Carnivores should head to the original downtown spot, where the flavorful beef-and-pork sausages come in a few forms—pickled jalapeños, curry ketchup, and cheddar-ale are among the toppings. Saus’s newer location at Somerville’s Bow Market, meanwhile, focuses on vegetarian fare, so there you’ll find meat-free Impossible dogs made even more marvelous with chili-cheese or served “Thai-style” with papaya slaw, peanuts, and sambal sauce. 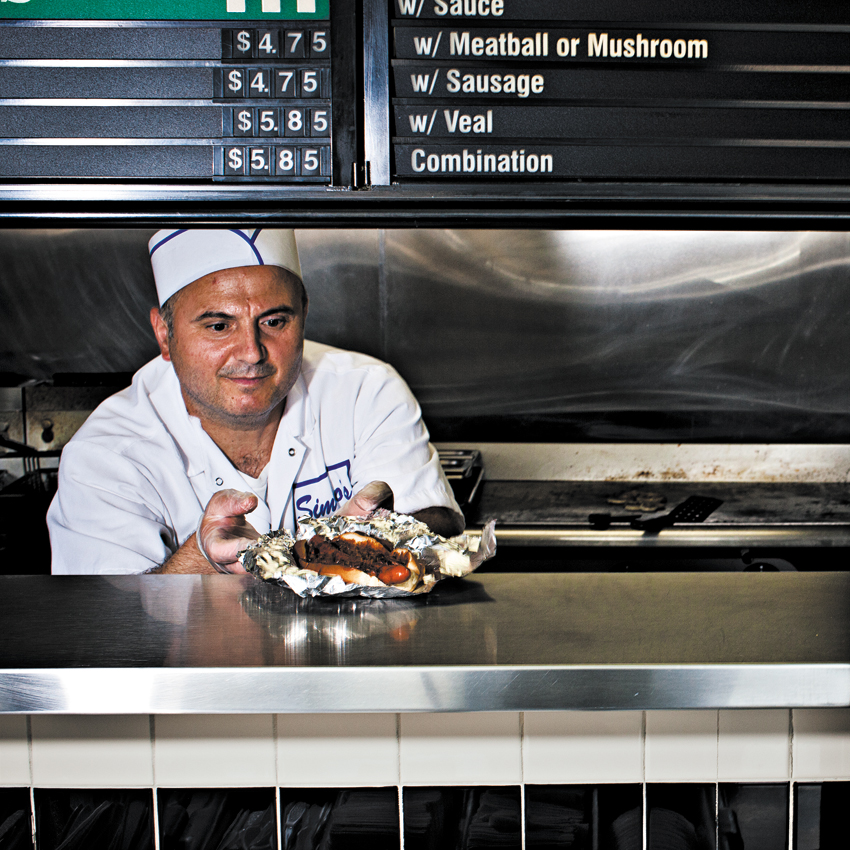 Bigger isn’t necessarily better—unless you’re talking about hot dogs, in which case, bring on the (nearly) foot-long favorites from Simco’s. The longtime Mattapan landmark is a simple walkup window with cool, vintage signage that nods to its decades-spanning history of serving some of the best dogs around; they’re big, juicy, served on a grilled and buttered roll, and topped with chili, cheese, or both. There’s also a Roslindale location, though from a local-character standpoint, the original still has the edge. 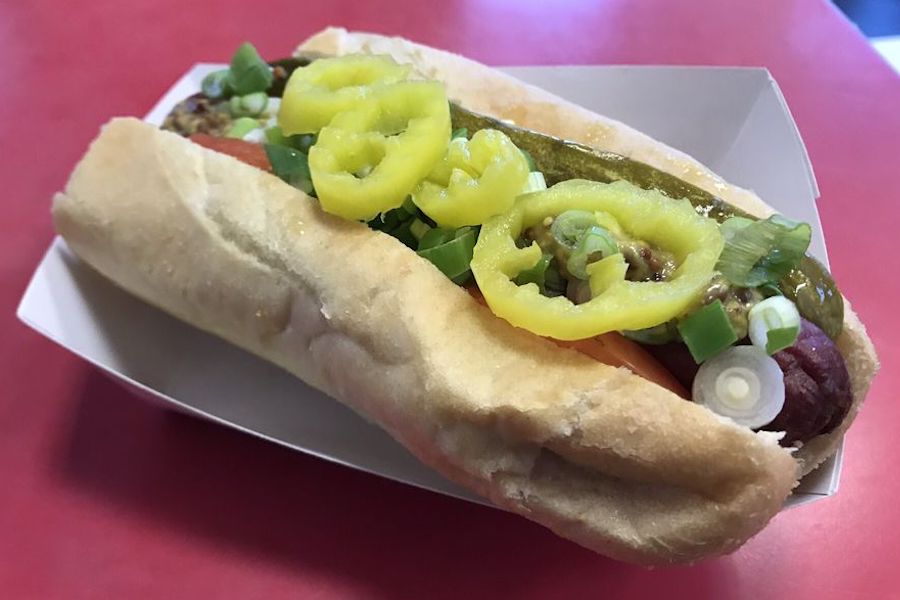 Hot dog at Spike’s. / Photo by Rich U. via Yelp

This straightforward hot dog specialist has been treasured by Allston-area college crowds for years. No wonder: Spike’s A-plus dogs do the trick every time, from the signature Junkyard—topped with banana peppers, scallions, and pickles—to the 57 T-Bird, which gets a lift from honey mustard and Swiss cheese. 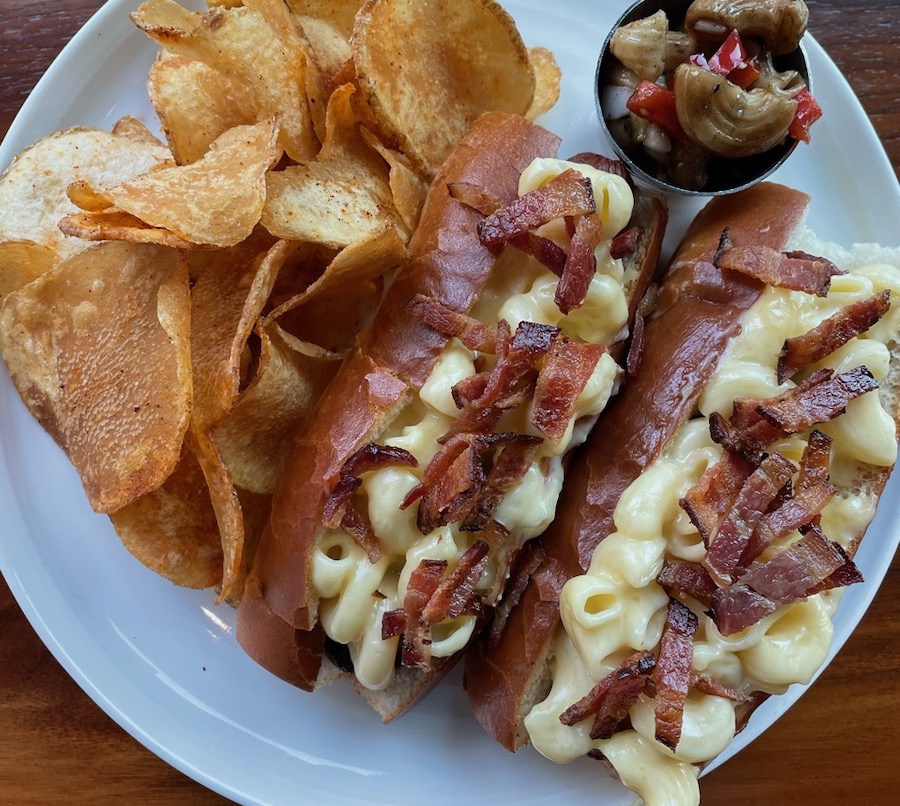 Chef-owner Sarah Wade has a way with comfort food, which is why she wound up nabbing our most recent Best of Boston award for her mac ‘n’ cheese. Unsurprisingly, then, she’s also quite adept at coming up with different delicious hot dogs on every “Weiner Wednesday.” Stillwater’s weekly dog drop might include toppings like molasses BBQ sauce with cheddar cheese and crispy onions; smoked bacon with jalapeño-ranch sauce; or (even more) bacon with a generous helping of that famous mac ‘n’ cheese. 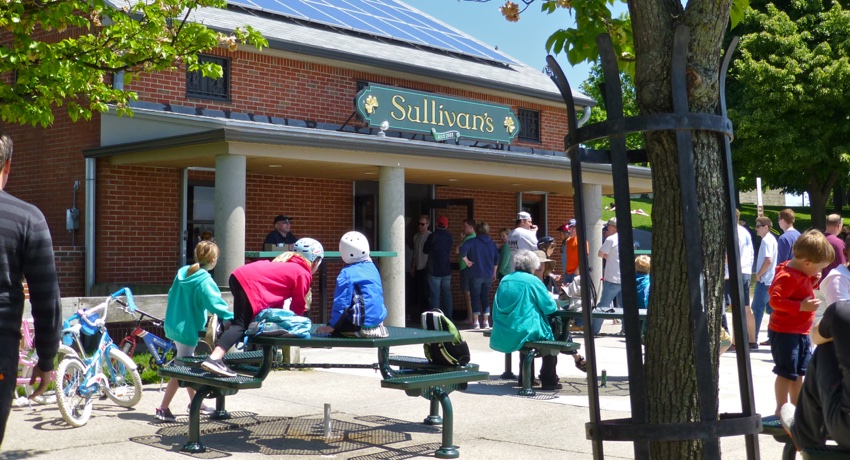 Eventually, this Southie icon will spawn a second location inside Hub Hall, an as-yet-unopened food hall next to TD Garden and North Station. Until then, though, you can still swing by the takeout-only original—a beloved fixture for its fried seafood and simple, super-cheap Kayem dogs that are grilled and then tossed on a toasted roll. Top ’em with cheese and chili for maximum mouth-watering.

Variety is a major virtue at Trina’s, a retro-cool hangout known for its “Dog of the Day” offerings, regularly-changing breeds such as the “Flyin’ Hawaiian Dog” with grilled pineapple salsa, bacon bits, and ginger- and brown sugar-laced barbecue sauce. There are menu standbys, too, including the Starlite Dog, topped with coleslaw and tangy aioli. Whatever you order, enjoy it under twinkling lights on the patio—or take your dog for a walk after hitting the Starlite Snack Shack window, which serves standard franks, veggie-friendly “tofu pups,” and delicious fried corn dogs.