In the very un-scientific hierarchy of comfort foods—French fries, ice cream, tacos—one dish reigns supreme: mac ‘n’ cheese. After all, a great mac ‘n’ cheese combines all of the flavors and textures that light up our animal brain with fireworks of food euphoria: There’s that salty, creamy goodness, plus the full-belly feeling that comes along with caving in to carb cravings. And so, whether you’re a mac ‘n’ cheese purist or use the dish as a blank palette to pile on fixings, here are nine of the best variations to savor around Boston right now.

With both an appetizer and an entrée portion of mac ‘n’ cheese available (spoiler alert: you’ll want the entrée), Ashmont Grill delivers on indulgence. Both baked versions combine cheddar and Monterey Jack cheeses with a topping of Ritz crackers. While the classic version more than satisfies any comfort-food cravings, you can also mix things up by adding bacon or pulled pork to the entrée-size offering.

It’s perhaps no shocker that a restaurant with the word “buttermilk” in its name would peddle a banging mac ‘n’ cheese. We are pleasantly surprised, though, that star chef Jason Santos offers two different, equally delicious versions, depending on where you dine. Head to the Back Bay original for cavatappi pasta drowning in a garlicky, herby cheese sauce with braised short rib and crushed Ritz crackers; the huge new Watertown outpost, meanwhile, covers that pasta in pork scraps, fresh chives, and a Flamin’ Hot Cheetos crust.

Besides serving up mashed potatoes and gravy you’ll want to scarf by the bucket, this Dorchester soul food spot proves that sometimes it’s best to not overcomplicate things. Case in point: The simply delicious mac ‘n’ cheese here is classic elbow pasta with just American and cheddar cheeses. The dish is baked, so that crisp-topped pasta adds a bit of texture—and it’s all a perfect companion to Down Home’s other Southern fare of barbecue ribs, fried fish, and more. (Oh, and despite the name, there is also dining-room seating at Down Home too.) 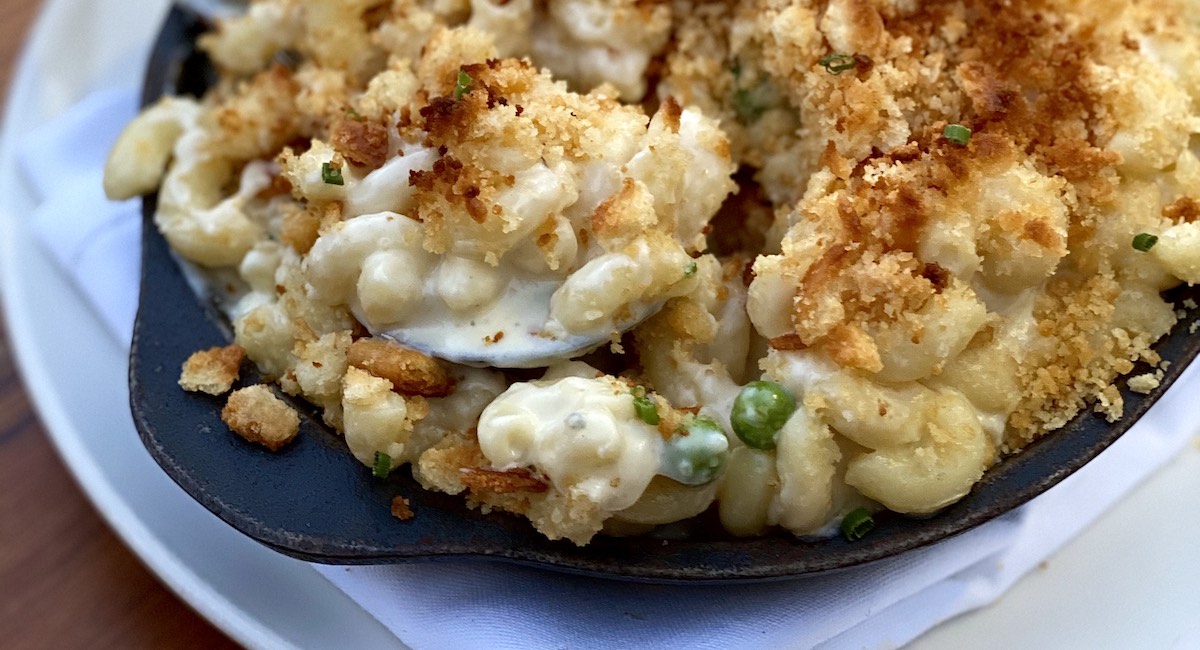 Southie haunt Lincoln Tavern is not kidding around with its comfort food-heavy menu, now helmed by chef John Ross, a Neptune Oyster alum who stepped into the kitchen recently. Here’s hoping he holds on to the truffle mac ‘n’ cheese, which fuses white cheddar, blue cheese, Fontina, and Pecorino Romano with English peas, buttery Ritz crumbs, and truffle oil. Truffle, like cilantro, is a divisive ingredient that many diners don’t want anywhere near their food. (For the record, those people are wrong and both ingredients are amazing). Here, though, it’s easy to taste how the truffle’s deep earthiness complements all the creaminess.

Mission Hill’s Milkweed, a favorite hangout for brunches of shakshuka and strawberry Nutella French toast since its opening in 2017, slings a casserole-y spin on the comfort-food classic for lunch and dinner. Their take is light-years more luxe than what you’d whip up from a box at home, though, adding shaved sirloin to a rich mornay sauce and blue cheese crumble, plus caramelized onions for added depth of flavor. The dusting of parmesan herbed breadcrumbs brings a bit of earthiness, and the shape of the elbow pasta ensures that each bite is coated in sauce. 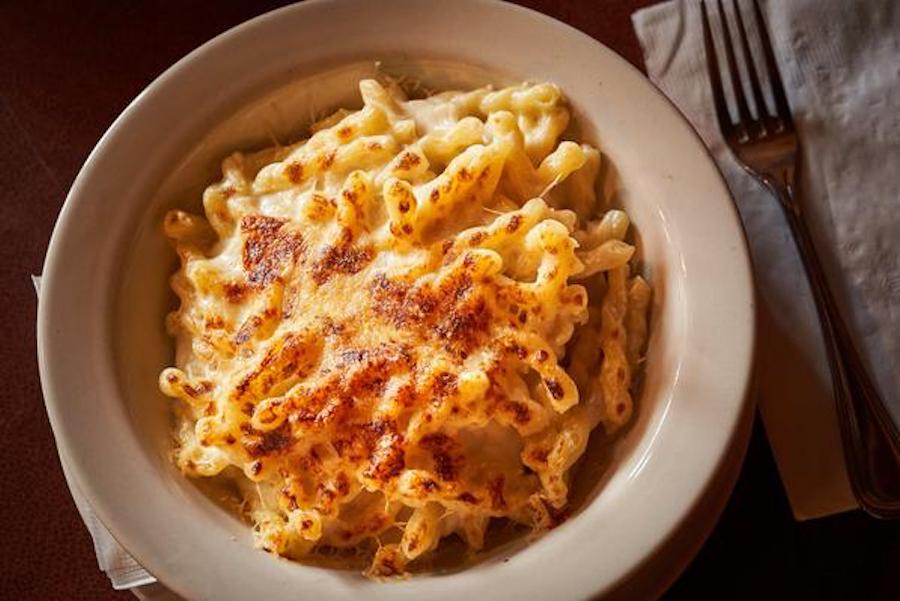 This South End mainstay might lure you in with its signature Alsatian pizza, but the sleeper star of the menu is the heaping plate of mac ‘n’ cheese with cheddar, gorgonzola, gruyere, and provolone. Since this dish is baked (you can request to skip this step, but why would you?), there’s a perfectly golden layer of slightly crisped cheese to meet your fork as you dive in. You can also add up to three toppings, including anchovies (trust us on that one), sausage, and goat cheese. Bacon, as always, is a no-brainer, but consider betting on some basil too; It offers a fresh, herbal zing that cuts through all the decadence.

It’s damn near impossible for anything to overshadow the exceptional beer list at Brookline’s beloved (and nearly 20-year-old!) gastropub. The mac ‘n’ cheese, though, makes a good go of it. The orecchiette is baked in a cast-iron skillet, and served as a simple melting-pot of cheeses or loaded up with any number of add-ins: pickled jalapeños, hot dog, shrimp, and fried egg are just a few of the hearty options available for pairing with an equally rich stout or two. 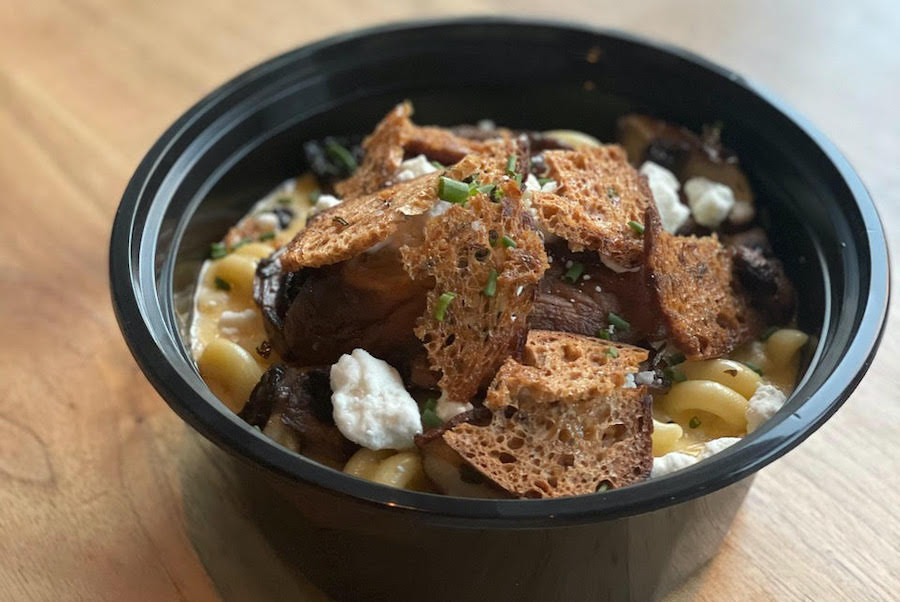 Why offer one mac ‘n’ cheese dish when you can launch a whole line of them? Downtown’s comfort food-focused eatery Stillwater has a takeout- and delivery-only spinoff—the Mac Bar—and its Best of Boston-winning menu is a multiple choice quiz with no wrong answers. Diners choose one of three bases (classic Velveeta and cheddar, Frank’s Red Hot mac, or Cholula mac) and then pile on a smorgasbord of toppings from 17 options, including molasses barbecue pulled pork and smoked bacon. If you’re paralyzed by the possibilities, pick one of chef Sarah Wade’s nine curated creations, such as the deli sandwich-inspired Rachael Mac topped with roasted turkey, horseradish slaw, Thousand Island dressing, and more. 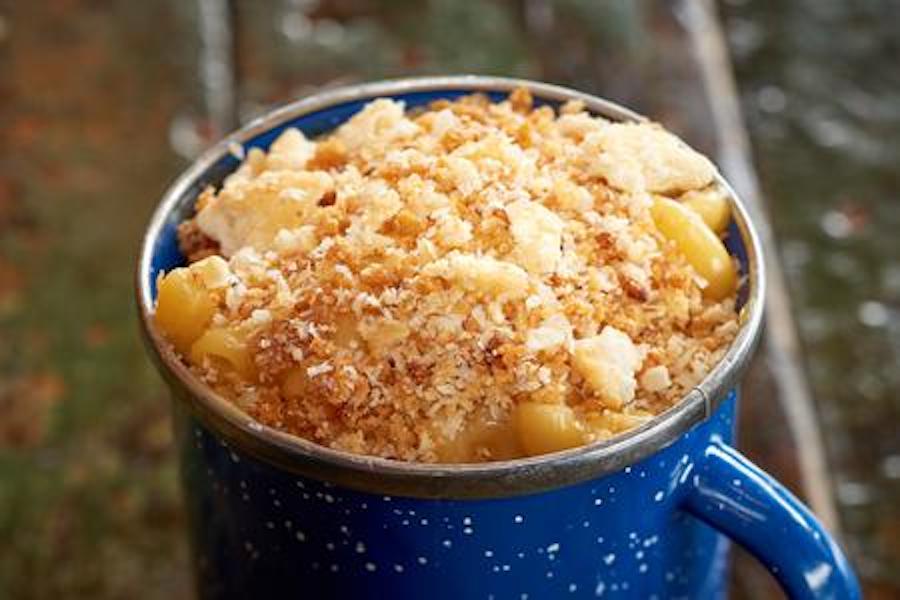 Since opening in 2011, chef Tiffani Faison’s first eatery in her Fenway empire has boasted some of the best barbecue north of the Mason-Dixon. Come for the behemoth, sauce-brushed ribs and the buttermilk fried chicken, but stay for the gooey mac ‘n’ cheese: cavatappi with cheddar, American, Monterey Jack, provolone, and Parmesan, all topped with garlic butter breadcrumbs and Ritz crackers. It’s served in a mug as a side option for the generous meat trays, but also offered as its own, entrée-sized “Big Mac” with optional mix-ins of scallion and pimento cheese or smoked jalapeno and bacon.