From traditional and family-friendly standbys to modern and romantic must-tries, here's where to eat in the North End right now. On one hand, you can’t throw a cannoli without hitting a great restaurant in Boston’s North End. On the other, when there’s so many options, it’s hard to decide where to go on any given night. Allow us, then, to narrow the scope to a handful of favorites that never fail to deliver—including pasta-filled trattorias, pizza landmarks, amazing bakeries, and more. (Of course, these being unusual times, it never hurts to call ahead and double-check operating status—especially if you’re hoping to score outdoor seating in the North End’s expanded patio scene, which has returned for another season.)

What do Melissa McCarthy, the Rock, and Joey Kramer have in common? They’ve all dined at this intimate second-floor restaurant, where first-time restaurateur Massimo Tiberi has pulled in a crowd of celebs big and…not so big (ciao, Kris Humphries) over the past few years. Maybe it’s his genuinely warm “Welcome to my house” greeting at the start of the meal. Maybe it’s the expert wine-pairing advice—a server-recommended nebbiolo was structured and sturdy, the ideal accompaniment to our fall-apart-tender osso buco. Or maybe it’s just the generous portions of better-than-average regional Italian fare.

Frequent turnover isn’t usually a good thing in the hospitality industry. But it has helped Bova’s Bakery—the tipsy college student’s go-to spot for a cream-filled lobster tail or cheese-and-meatball-stuffed arancini at 3 a.m.—stay in business for nearly a century. Three extended families, all descendants of founder George Bova, each run the always-open bakery for six months before handing it over for the next “turn” to manage. 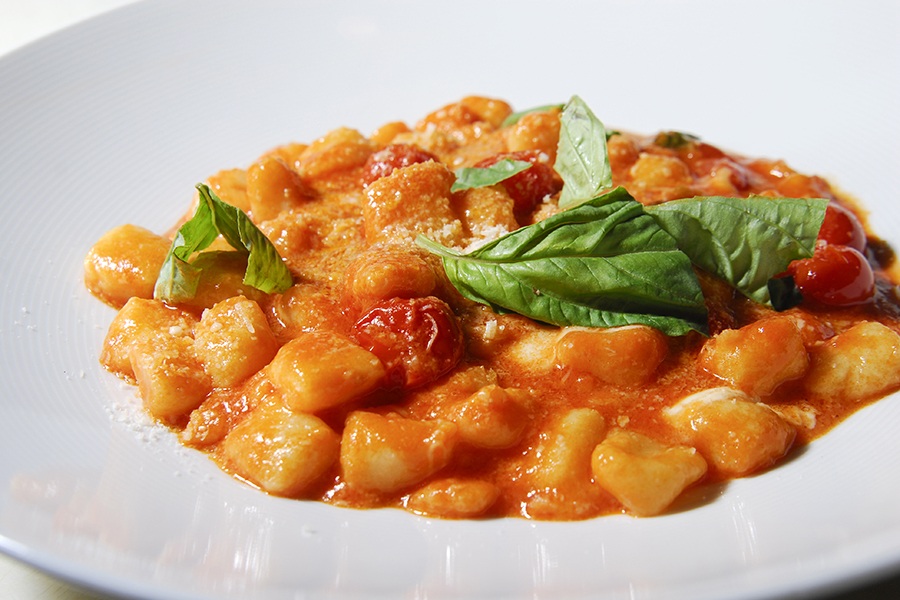 Gnocchi Sorrentina is on the takeout menu from the North End’s Bricco ristorante. / Photo courtesy of Bricco

If you feel like you’re being taken care of by an entire Italian village when you dine at Frank DePasquale’s Hanover Street flagship, it’s because you are: The restaurant’s breads, fresh pastas, and imported meats are sourced from DePasquale’s own old-world panetteria and salumeria next door. His restaurant group, in fact, is a mini North End empire, with an extended-stay pensione above Bricco and several other eateries dotting the neighborhood. But this modern standby is still the one to beat for its well-executed menu of Italian staples—pillowy gnocchi baked with bufala mozzarella was a favorite—and classic steakhouse dishes.

At first blush, this stylish Sicilian-inspired restaurant, with its open kitchen, exposed brick, and retractable front walls for warmer months, feels like it might belong in the South End. But one spoonful of executive chef Damien DiPaola’s creative pasta dishes—from the tightly curled ribbons of fresh fettuccine accented with pistachio pesto and a shock of vibrant ahi tuna to the impossibly rich baked rollati filled with prosciutto and ricotta—will bring you right back to Hanover Street.

Not many restaurants with a $88 entrée (the lobster fra diavolo for two) can get away with serving wine in disposable cups, not accepting credit cards, and asking guests to tiptoe through the dishwashing station to get to the restroom. But the garlicky squid-ink pasta; golden, greaseless calamari; and surprisingly addictive monkfish Marsala at this intimate, family-run hole in the wall will make you quickly forget about those minor inconveniences. While there’s no dessert menu here (who needs one when there are a half-dozen bakeries within walking distance?), at the end of a meal, you may find yourself lingering at the table, mesmerized by the one-man show in the open kitchen and the endless plates of seafood coming out hot and fast.

From appearances, you wouldn’t know there’s anything special about this nondescript North End pizzeria: The cash-only operation kind of looks like a cafeteria, has no website, offers only a few items, and closes once they sell out (usually by mid-afternoon). But anyone who has ever tasted the decades-spanning institution’s perfect, doughy-delicious Sicilian slices knows that even in a historic neighborhood flush with competition, these are truly landmark squares. “It might even be as good as my mom’s” is a sentiment echoed over and over again inside this cozy Salem Street brownstone, where the Giorgio family has been churning out gargantuan portions of red-sauce classics for nearly three decades. Favorites range from the irresistibly spicy frutti di mare with fresh fettuccine (worth the $3 upcharge) to the tender eggplant Parm with a bright marinara.

In normal-times, it’s not uncommon to hear passerby mutter, “Is it really worth the wait?” to a legion of devotees lined up outside this seafood and pasta spot for more than an hour—on a Tuesday night. Answer: most of the time, especially if you have a big appetite. The budget-friendly restaurant sates the hungry masses with piles of butter-saturated garlic bread and heaping portions of chicken Parm, served with $20 bottles of wine. At $60 for two (or more) diners, the oft-Instagrammed zuppa di pesce, a staggeringly large platter of linguine with lobster, shrimp, scallops, calamari, clams, mussels, and your choice of sauce, is the best deal under the restaurant’s tin ceiling—and possibly in the whole neighborhood.

For those who can’t, er, stomach the tourists and rose vendors clogging up Hanover’s sidewalks comes this waterfront spot, just a seven-minute stroll from the action but seemingly a world away. The dining room eschews the neighborhood’s traditional dark décor in favor of pearly glass tiles and marine blues and greens, creating a relaxed, contemporary ambiance for dinner with friends. Kick back with a creative cocktail—may we suggest an Il Molo Mai Tai, with rum, lemon, and almond?—before tucking into seafood-focused plates like shrimp-and-basil-stuffed trout with tomatoes and mussels; daily house-made pasta with buttery lobster and mushrooms; and the innovative hot seafood tower.

Serious tipplers won’t be disappointed by the selection at Lucca, which offers an of-the-moment beverage menu—cocktails like the herbal Moment in Thyme; rotating craft brews on draft; and a deep list of whiskeys—alongside a top-notch cellar of Italian and Californian wines. The kitchen is open past midnight, so before or after the game, post up at the dining-friendly bar for the white wine and saffron-bathed mussels with house-baked focaccia, or baked orecchiette with broccolini and fontina crema—like a northern Italian take on mac ’n’ cheese. Its name may suggest red-sauce casual, but this North Square townhouse restaurant is quite the opposite, focusing on refined Italian fare: Beef carpaccio with arugula and black truffles is a lighter spin on the mayo-topped version developed at Harry’s Bar in Venice, while fresh pappardelle pasta is tossed in a hearty Tuscan-style rabbit ragu. The service and setting—including several chandeliered private dining areas, one of which seats just four—is white-tablecloth formal. It’s a style that’s falling out of fashion these days, but is still comforting to revisit every once in a while, especially when it gives Nonna a chance to break out her pearls.

With its sleek, brasserie-like interior, straight-from-the-water bivalves, and buttery, overstuffed lobster rolls, this landmark would earn a spot on any list of essential restaurants across Boston—not just those in the North End. Neptune remains consistently excellent both in the kitchen (try the comforting, seafood-packed cioppino and the sweet-savory johnnycake topped with honey butter, caviar, and smoked trout) and in the front of the house. Friendly yet firm hosts politely shoo out those keeping the door cracked open on a cold day, and make good on promises to call your cell in two hours when your seat at the marble bar is finally ready. 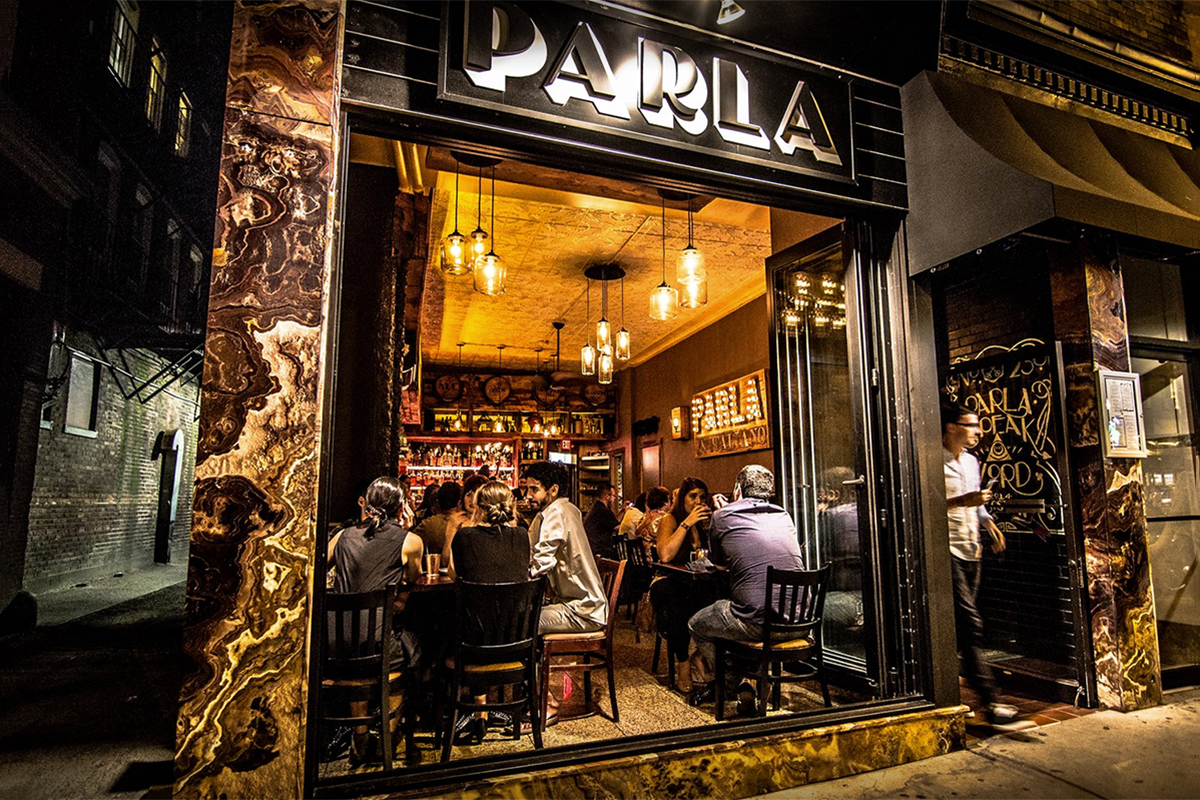 Take your chances rolling the 20-sided die that this quirky, contemporary Italian tavern offers to guests adventurous enough to accept a random selection from its secret list of numbered cocktails—no matter what you end up with, you won’t be disappointed. That said, if you’d rather know what you’re getting into, there’s plenty of spicy, sweet, and herbal tinctures described on the rotating menus of themed drinks, as well as the option to pair your favorite spirit with a shrub, offered in flavors like pineapple-citrus and blackberry-cilantro. All the tipples are equally excellent for washing down Parla’s modern small plates, which tap into some broader Mediterranean influences: Lamb skewers with cucumber labneh and a parsley, vidalia, and sumac salad, for instance.

20 years after it opened, chef Anthony Caturano’s debut still hits the sweet spot between romantic hideaway (a candle on every table) and neighborhood hang (a game always on at the bar). Nestled on Fleet Street, the restaurant boasts a 27-page wine list and lush dishes such as raviolo di uovo, a single oversize orb of brown butter-drenched pasta filled with ricotta and egg yolk, and perfectly braised lamb shank. The minimalist dining room, with its gallery- style lighting and a few pieces of stark contemporary art, keeps the focus exactly where it should be—on your meal, and your company.

We can’t vouch for all the secondary locations of the North End-born pizzeria chain, but the original location—founded in 1926 and Boston’s oldest restaurant for brick oven pizza—remains legendary for a reason. The pies arrive with cheese bubbling, crusts crisped just-so, and sauce tantalizingly tangy. The atmosphere is a huge part of the experience too: Regina doesn’t look like she’s had a makeover for decades (that’s a good thing!) and the walls are covered in photos of major celebrities who have stopped by for a legendary slice or two.

A glowing shelf with saffron-tinted Liquore Strega. Eight crystal chandeliers. A VIP photo wall. And yes, that’s really The Godfather and Goodfellas playing on multiple televisions in the dining room. The extravagant interior sets the scene for an evening of larger-than-life cocktails—go for the Aperol spritzed with champagne and apple cider—and rich, indulgent fare, from a huge grilled tenderloin to cacio e pepe that is prepared table-side in a giant wheel of cheese. 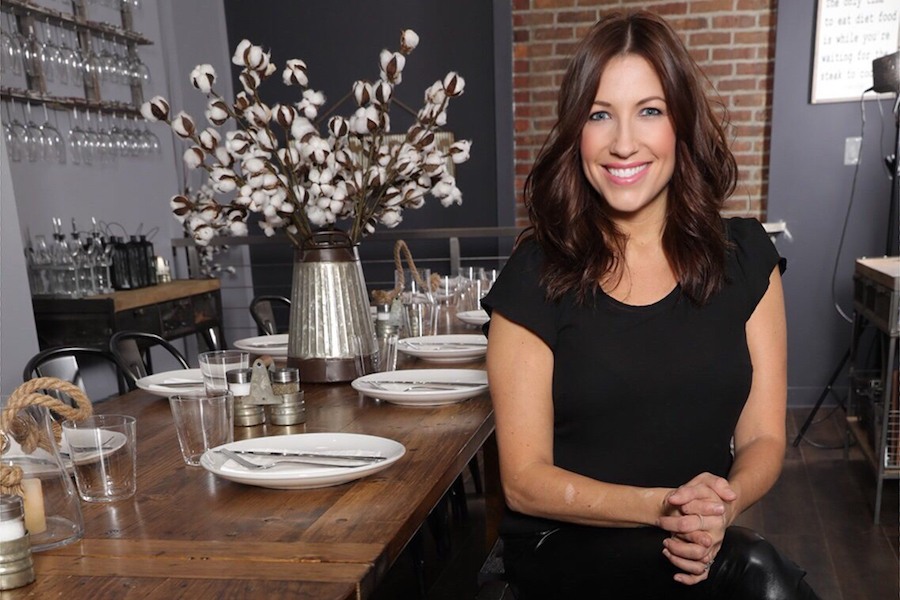 Table by Jen Royle opens on Jan. 22 in the North End. / Photo provided

In non-pandemic-times, guests gather at a single communal table inside sports reporter-turned-chef Jen Royle’s single-room restaurant; plates are passed family-style, serving utensils are shared, and new friends are made. For obvious reasons, that approach is on hold for now—but the twice-nightly seatings are still a hit with Royle’s loyal fans, who come for the Italian comfort-food classics (including some of the best meatballs in Boston) and gregarious personality. Her following is big enough to support two new projects, too: Table Mercato, a neighboring market for grab-and-go foods and Italian groceries, as well as the forthcoming Table Caffé, which will focus on sandwiches and gelato.

Who knew that the Boston neighborhood inextricably associated with Italian food would happen to be home to one of Boston’s best Mexican restaurants? Anyone who has been to Tenoch, that’s who. The Medford-born trio of restaurants opened in the North End in 2014, and we’ve been fiending for the tortas ever since. When you’re not chomping on telera bread sandwiches stuffed with fried chicken, sausage, and gooey Oaxacan cheese, though, you’ll find equally tremendous tacos, burritos, enchiladas, and more. 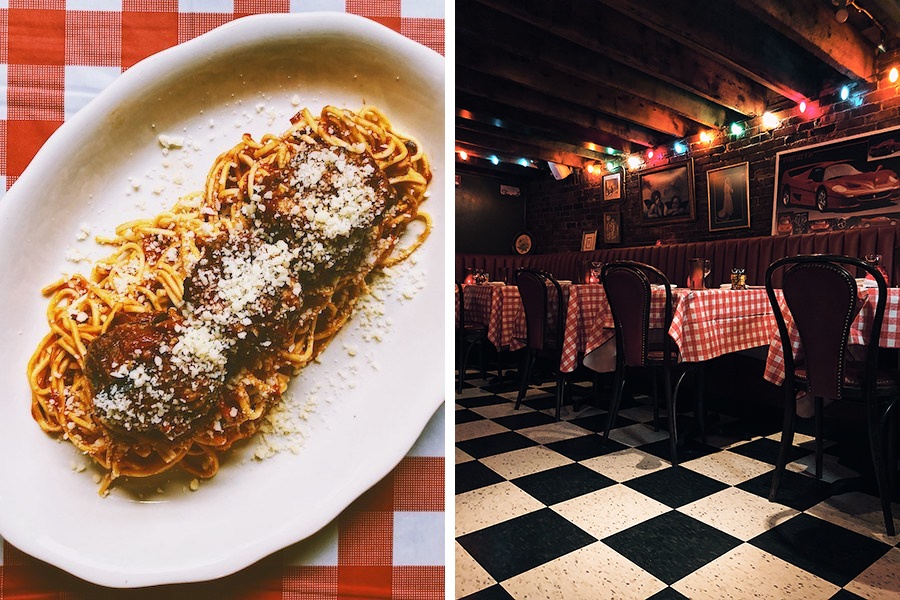 One of Little Italy’s newest red sauce joints, which opened on the edge of the neighborhood in early 2019, is instantly familiar—but way better than you remember. Sink into a plush, red vinyl booth at a checkered-red table—yes, that really is Billy Joel’s “Scenes From an Italian Restaurant” on the speakers. Then dive into old-school Italian-American comfort foods like mozzarella sticks, spaghetti and meatballs, and crispy-juicy chicken parm.

Man can not live on pasta alone—sometimes, even in a sea of red sauce joints, you just need some elevated New American gastropub fare to set your mouth a’watering. In that event, Ward 8 is where to go. A big four-sided bar dominates the buzzing interior, ready to pour out plenty of fine whiskeys and shake together drinks like the spicy-sour Trial by Fire, made with green chili-infused vodka and hellfire bitters. Once your thirst is sufficiently slaked, find sustenance in the form of tantalizing duck wings smothered in a sweet chili and sesame glaze, or braised short ribs with sunchoke purée, spring onions, and roasted carrots.

This guide was updated in April 2021.