15 Places to Find the Best Ramen in Boston 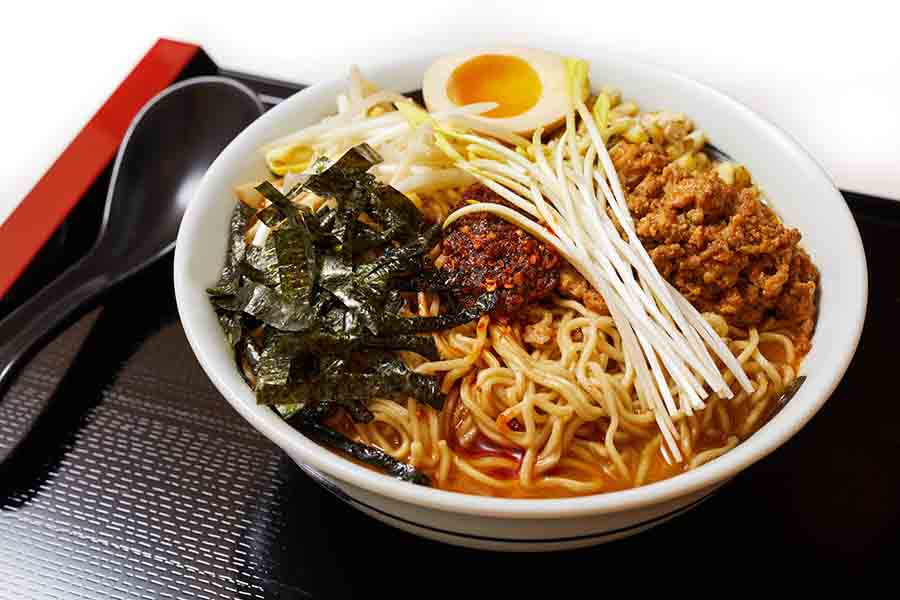 The word “ramen” simply describes springy wheat noodles—so yes, those just-add-water snacks you devoured in your college dorm technically qualify. But hopefully, by now, they’re no longer your only association with Japan’s quintessential comfort food. After all, the dish is really represented by an endless assortment of regional variations, from a silky-salty shio broth from Sapporo to a rich and porky soup from Fukuoka. Boston is in the midst of a ramen renaissance, brimming with bowls of all kinds, so here are 15 of our favorites that’ll help you achieve noodle nirvana. 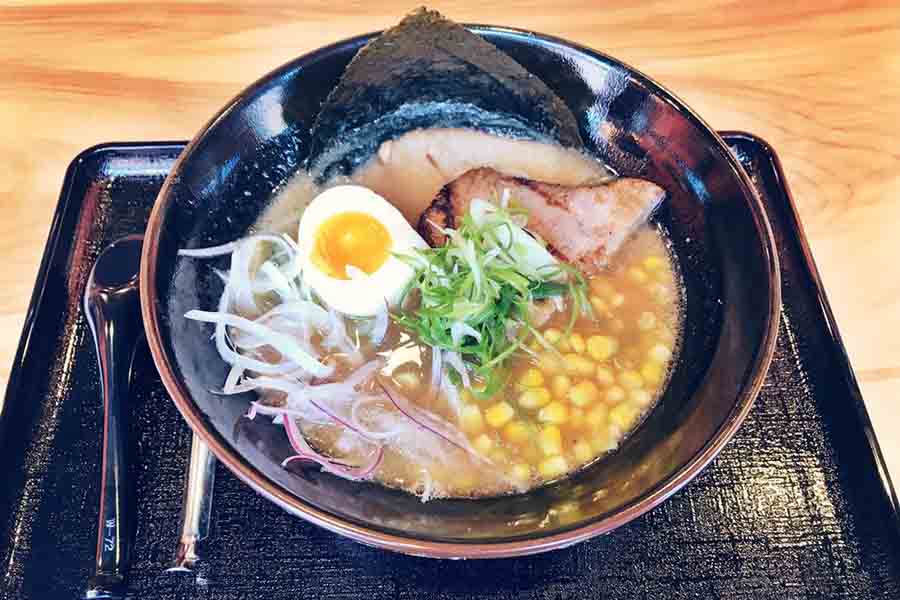 Tonkotsu ramen with corn photo by Kiki C. via Yelp

Descend a few stairs into this sunny little shop, located around the corner from South Station, to slurp whichever type of soup suits your style: Soy sauce-bolstered shoyu, lightly salty shio, and rich and porky tonkotsu are all excellent here. For a brothless option, the same springy noodles are well-matched with miso-seasoned ground pork and raw egg yolk. 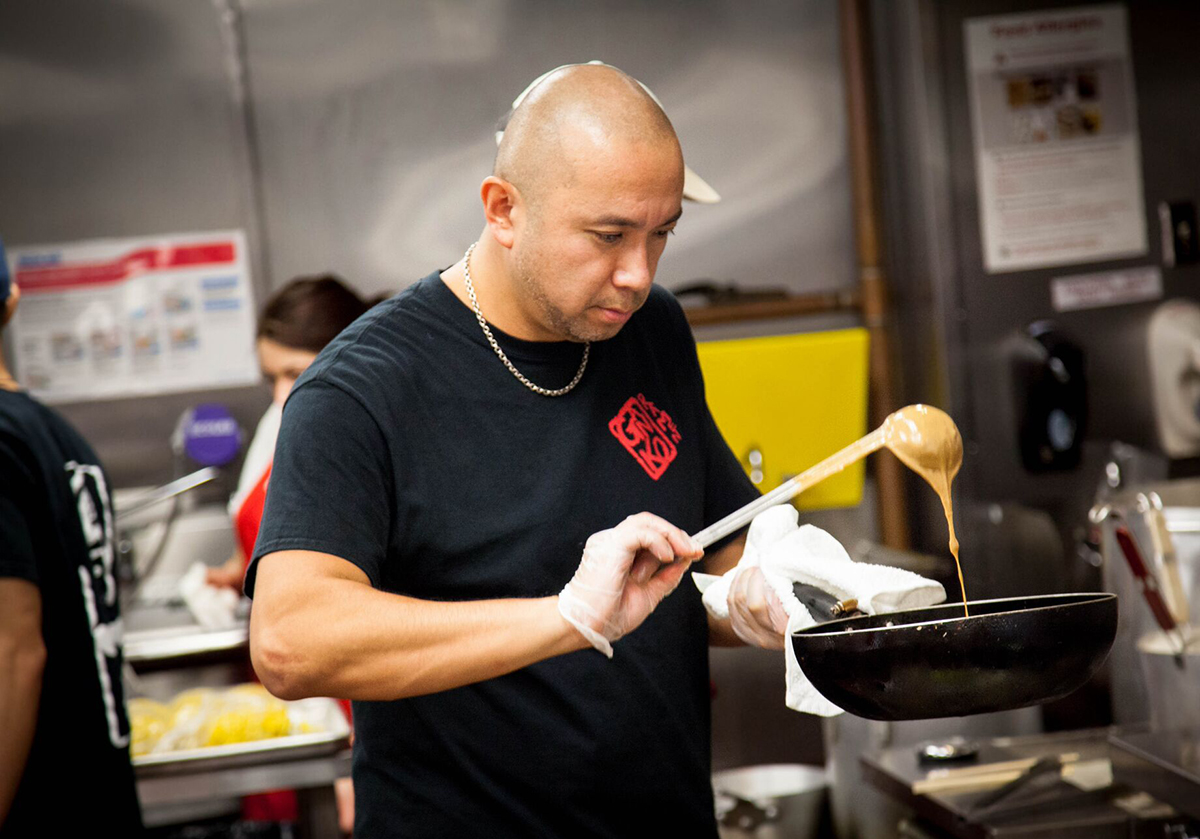 After working at numerous pan-Japanese spots around Boston, chef-owner Ken Iwaoka honed in on ramen at his first solo restaurant inside the Coolidge Corner Arcade (where he also has a takoyaki shop called Gantetsu-Ya). Iwakoa specializes in Sapporo-style soup, characterized by broth bolstered by wok-caramelizing the tare (aromatic sauce, like shoyu or miso) instead of simply mixing it with the dashi (liquid base). Every option is flavorful, but we’re particularly keen on the nutty, sesame-spiked tan tan bowl. 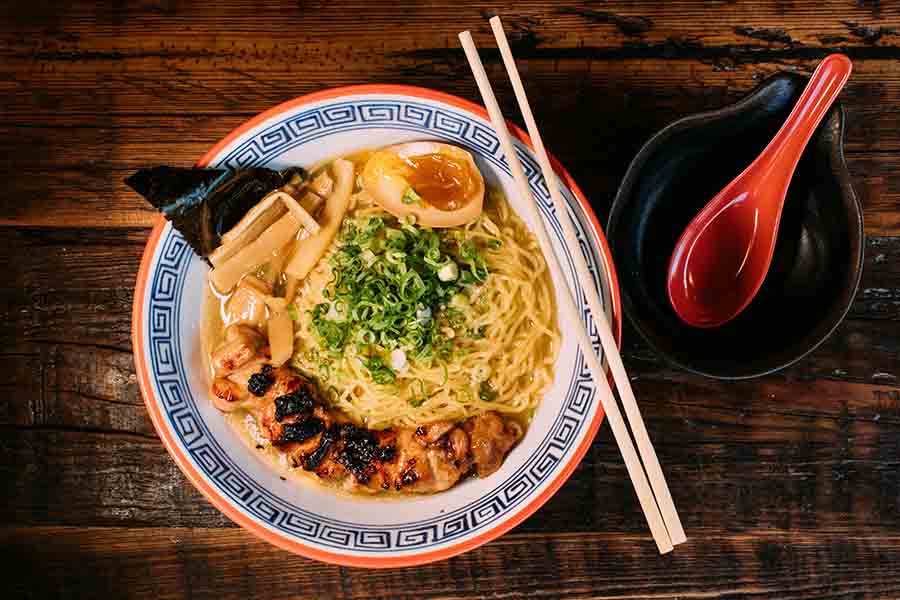 The “funky chicken” ramen at Hojoko is a menu mainstay for good reason. / Photo by Natasha Moustache

The “funky chicken” ramen has been a staple on the menu since chef Tim Cushman’s rollicking izakaya first amped up the Fenway dining scene in 2015. For very good reason: The umami, koji-marinated chicken highlights the kitchen’s robata-grill program, and the light, fragrant, and deeply satisfying broth proves that the James Beard Award-winning chef takes soup as seriously as he takes his sushi rice at O Ya. There’s also a spicy miso ramen on the menu, which bolsters the same chicken-based broth with tangy hacho miso, spicy ground pork, and tempura-fried kernels of sweet corn. 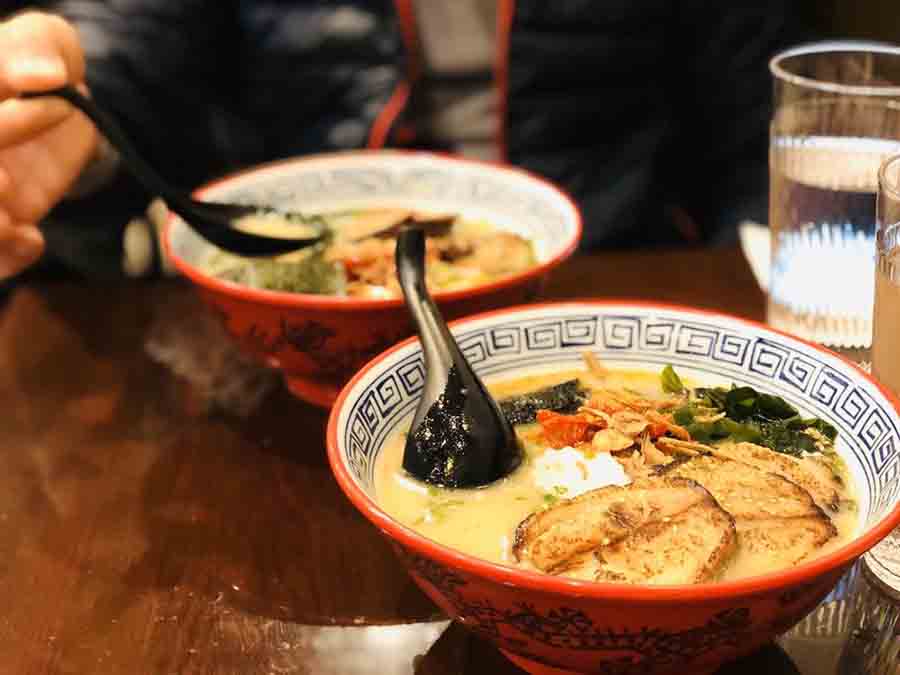 It was prime ramen season—the deep doldrums of wintertime—in 2019 when this spot finally replaced Medford-bound Pikaichi inside Allston’s Super 88 market. The new ramen shop has proven itself a worthy replacement, with super-rich bowls ranging from light but velvety pork tonkotsu, to vegetarian-friendly noodle soups with pleasantly sweet and acidic tomato broth. 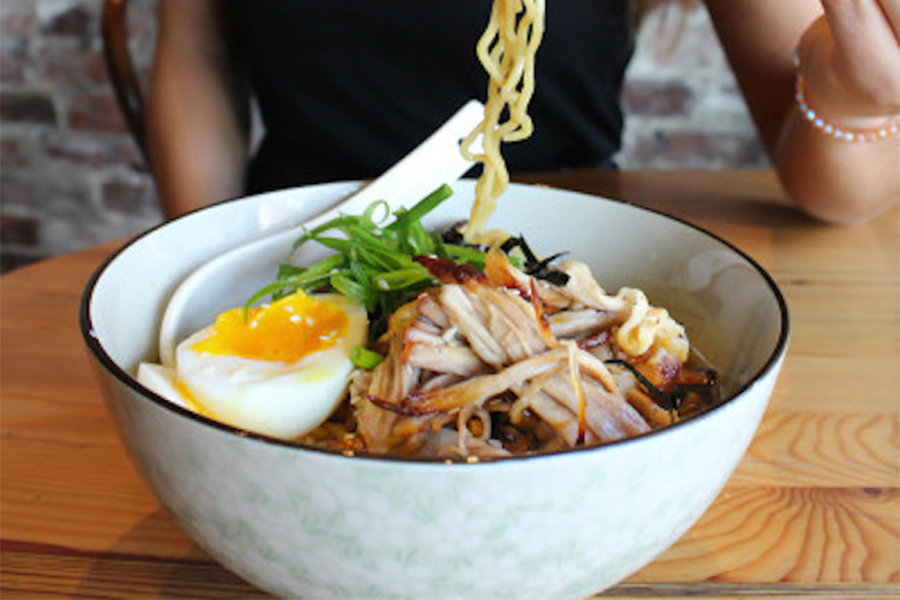 OK, so this South Boston bar—best known for stacked pancakes and more daily brunch offerings—might not be top-of-mind when a noodle craving hits. But chef Nick Dixon’s team is ladling up rotating ramen specials every Wednesday night, which range from traditional (pork and chicken shoyu ramen with char siu pork belly and roasted corn) to the… less so: (“Roman Ramen,” with a pork-and-Parmesan broth, porchetta, roasted tomato, cremini mushrooms, Calabrian chili paste, scallions, and a soft egg). #RamenWednesdays are definitely worth checking out. 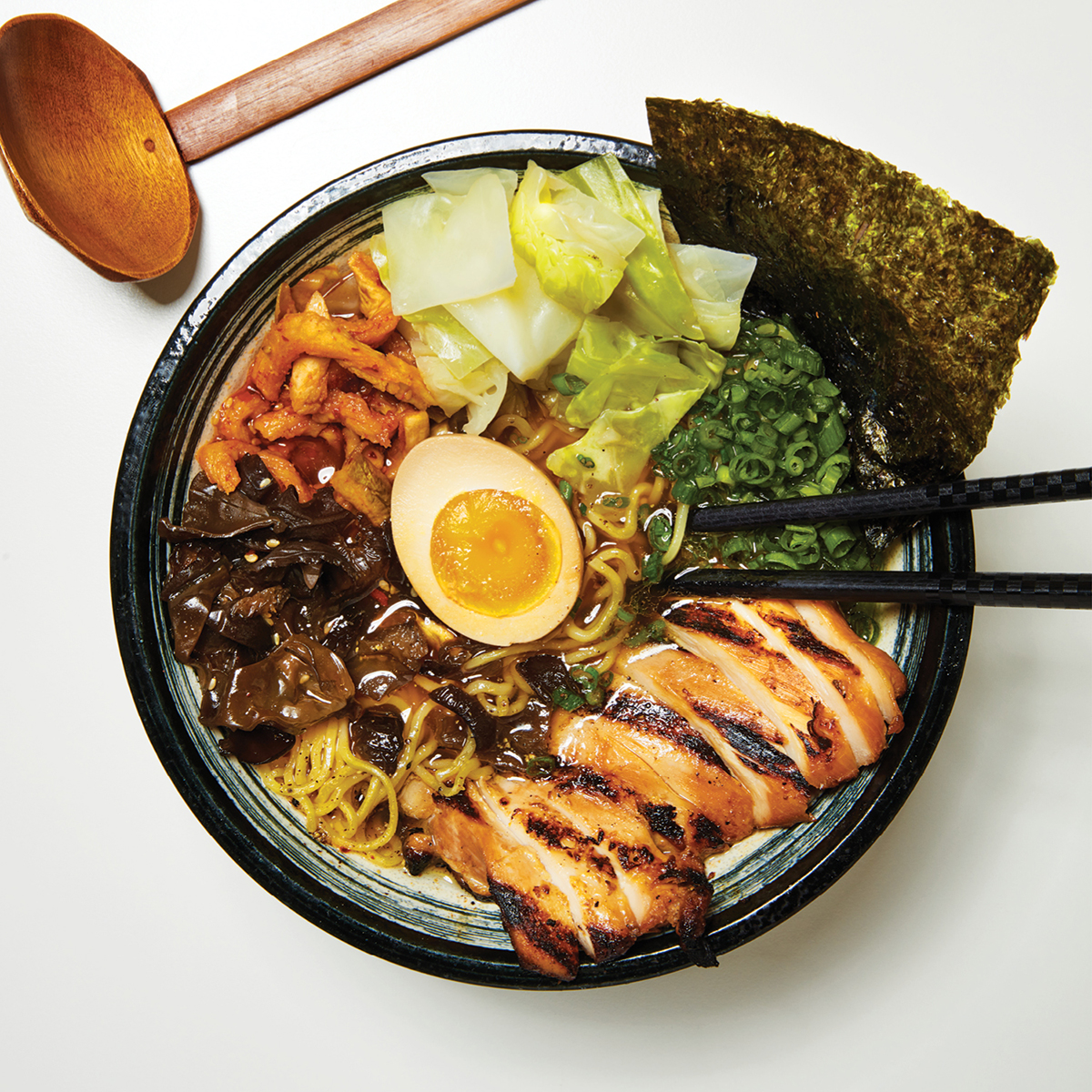 Opened in early 2016 by Sycamore chef-owner Dave Punch and his former sous chef, Daniel Scott, this fun little noodle shop is as good as any reason to visit Newton Centre. Make the suburban trek for Scott’s paitan chicken ramen in particular, which is creamy and complex thanks to an addition of just enough schmaltz (it’s not too greasy), and a hearty topping of char siu-style grilled chicken thigh. 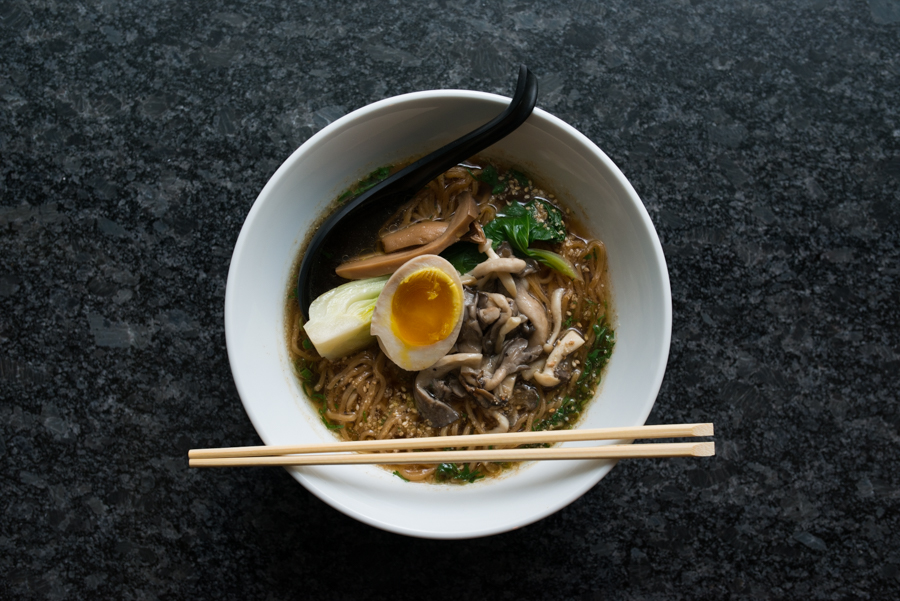 As a pop-up outfit, self-taught chef Moe Kuroki elevated Boston’s ramen scene with her soulful rendition of the milky, porky, burnt-garlic-spiked tonkotsu broth from her childhood in Fukuoka, Japan. But when she opened a standing-room-mostly storefront in early 2018, daily availability of her “smoky shoyu” instantly made it a signature bowl, too: Long-simmered vegetables and a topping of truffled mushrooms lend deeply layered flavors to this surprisingly vegan-friendly revelation. 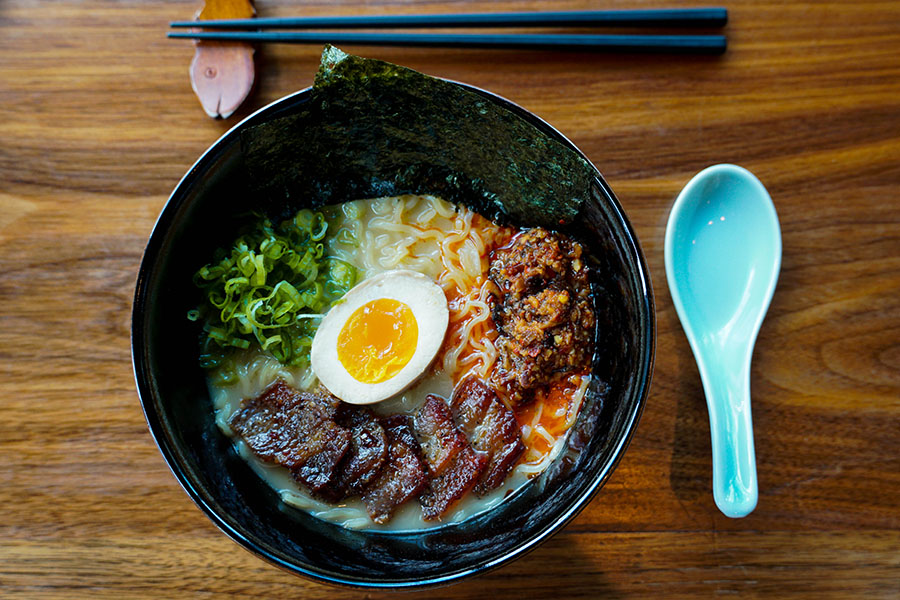 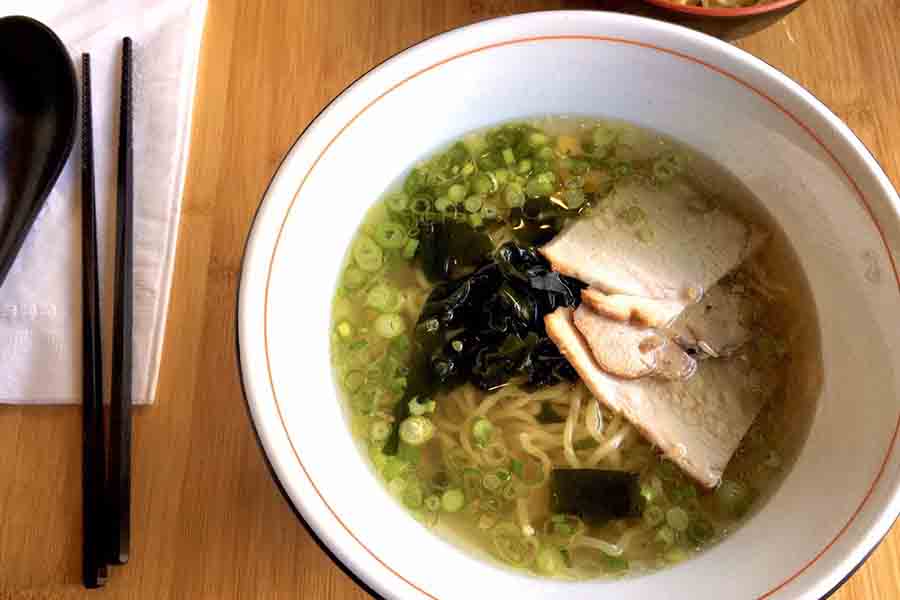 Yuzu shio ramen photo by Yunnie B. via Yelp

Chef Taka Akatsu’s custom-made noodles and varied broths have been a mainstay on the Boston ramen scene for nearly a decade. In 2018, his Allston shop relocated to Medford, where he’s still serving up inexpensive ($9) bowls of miso, shio, shoyu, and vegetarian-friendly ramen. Try the yuzu-spiked shio style: The addition of citrus is a clean and creative counterpoint to the salty broth. 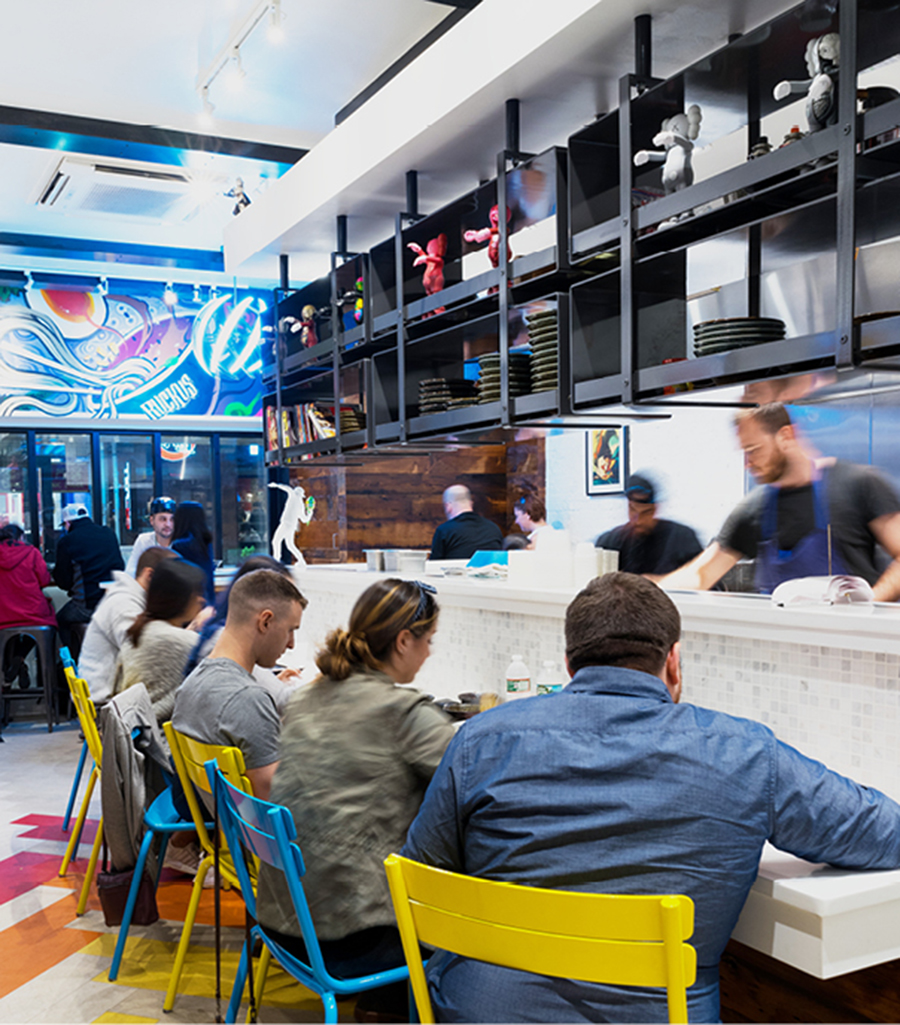 The Shōjo team took their winning ramen and cranked it up to 11 at their lively, hip hop-fueled, pan-Asian noodle offshoot, which hit Chinatown in 2017. Executive chef Mike Stark’s house-made noodle game is strong, including superiorly springy squiggles for the Tokyo style and spicy “Miso Lit!!!” ramen bowls, as well as wide rice noodles for stir-fries, and must-slurp udon. 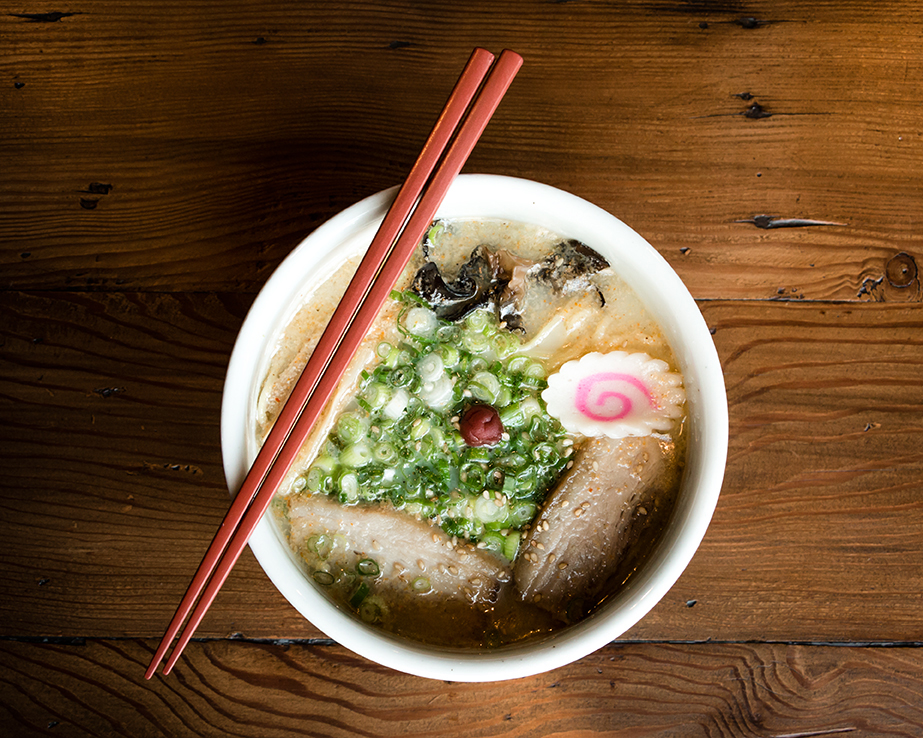 Shio ramen at Santouka Back Bay. / Photo by Kelsey Cronin

This Japanese import specializes in long-simmered pork shio broth, lightly seasoned and silky, and a fine palette for chewy pork chashu and a soy-soaked egg. If you like spice, try the tonkotsu kara miso: The robust broth is kicked up and bolstered with just enough fishy bonito dashi for a bold and balanced bowl. Expect to wait for a seat at both Santouka’s pocket-sized Back Bay outpost and its large Harvard Square location, which is popular among students and families. 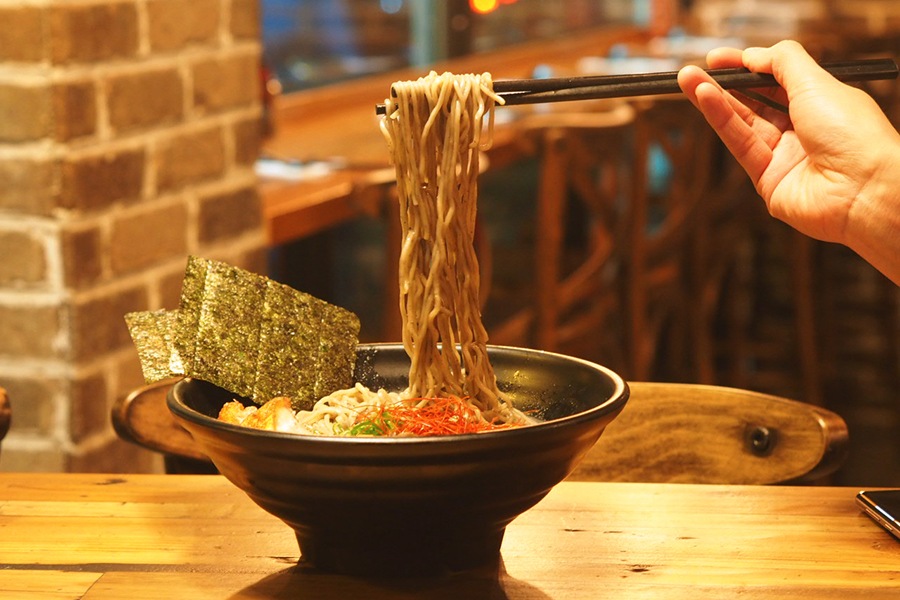 The name says it all: This Jamaica Plain joint, which recently debuted a second location in Brookline, has mastered all kinds of broth, from spicy miso and tan tan, to Thai-style khao soi and steaming Vietnamese-style pho. Don’t let the breadth of the menu intimidate, though; it’s all quite good. For ramen lovers, there is a traditional tonkotsu, shoyu, and more, including a full-flavored vegetarian option. 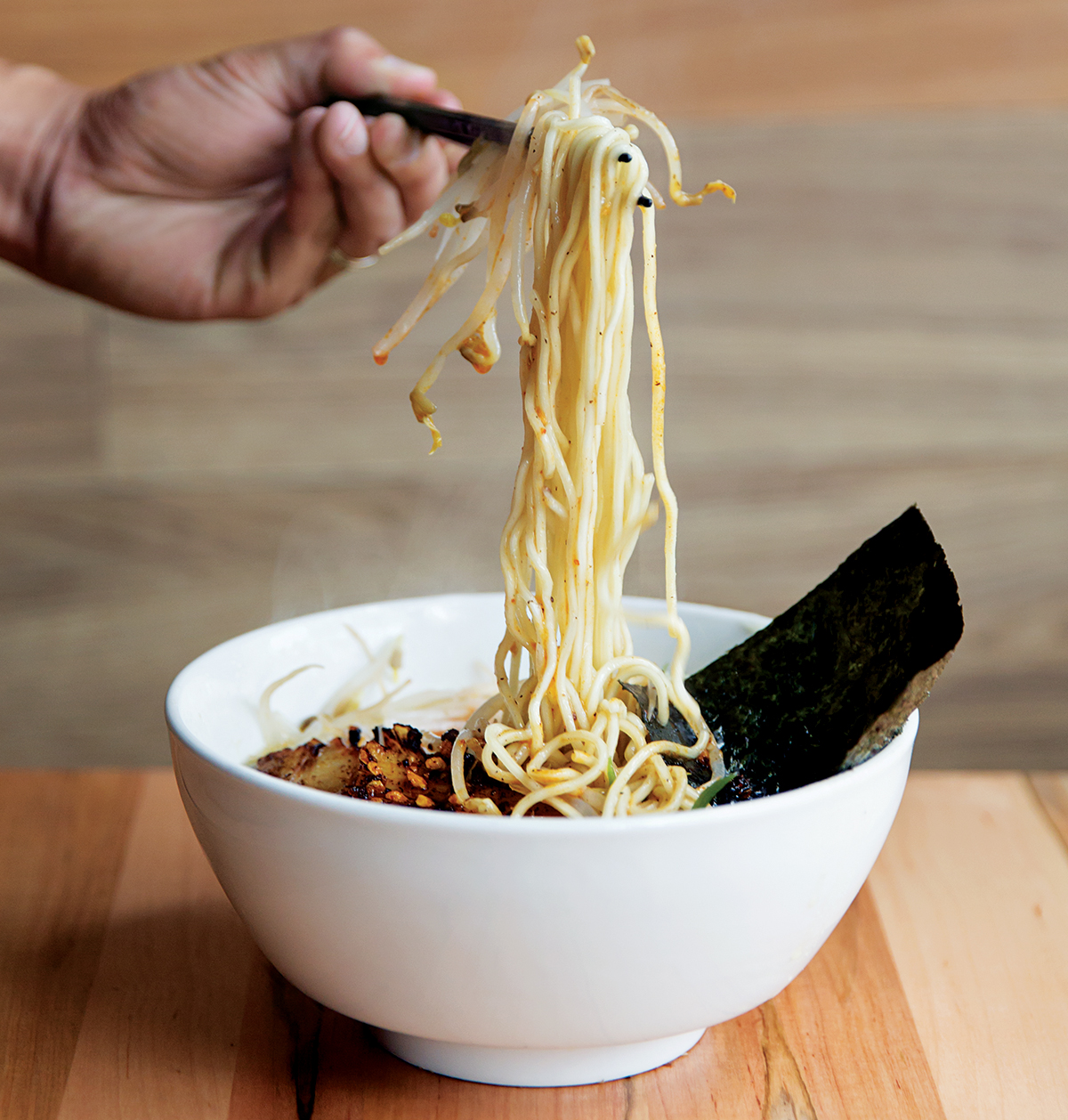 This New York City chain has grown its Boston-area presence to three locations—which is great news, as its thick and hearty, chicken-based paitan-style broth is eminently satisfying and brimming with Totto’s signature straight noodles. It also offers a vegetarian-friendly version, built with seaweed and shiitake mushrooms. 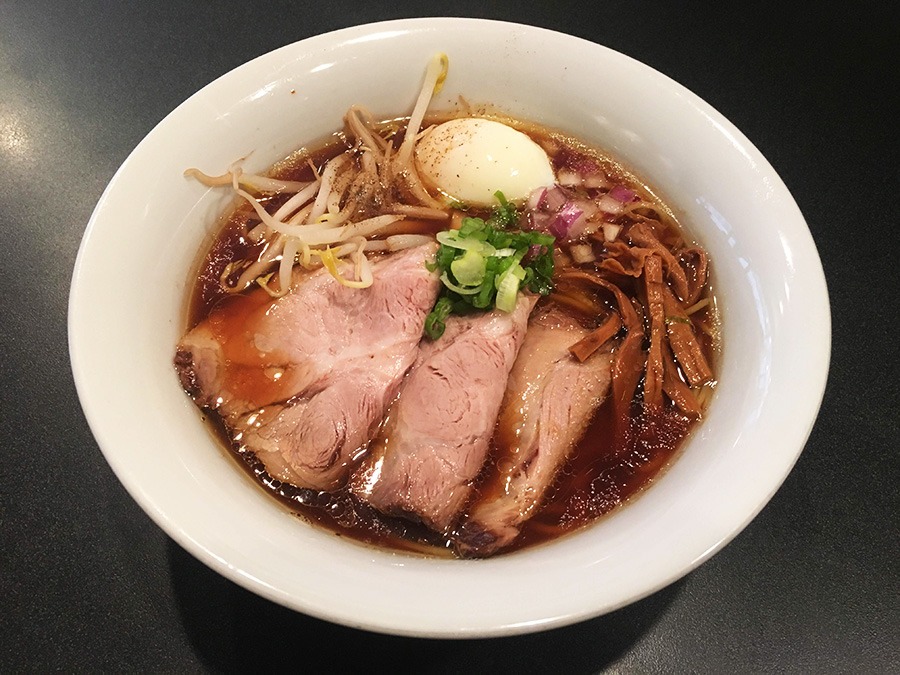 Self-taught chef Masuo Onishi might very well shutter this restaurant after 1,000 days (it opened April 18, 2018). He reveals a new bowl of noodles, inspired by a distinctive chapter of his life, every 200 days. Sound like a bit much? Just be here now, and enjoy the ramen. The menu always features a Tokyo-style shoyu bowl and creamy paitan, both full of scratch-made noodles and topped with the best chashu pork around. Onishi marked Day 400 in late 2019, so you have time. 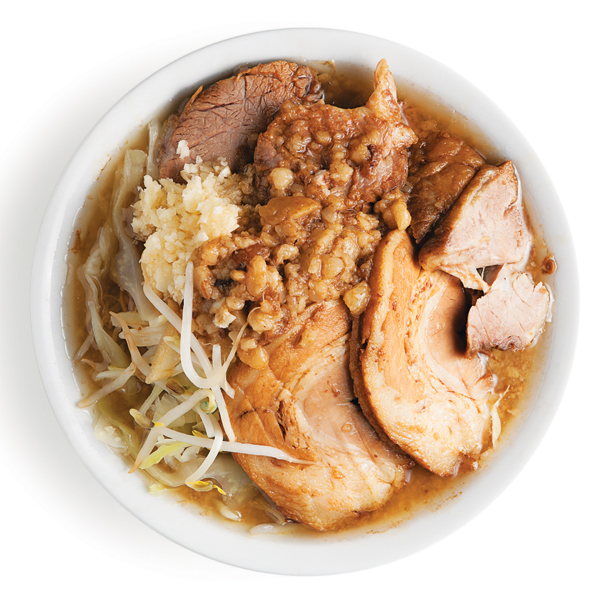 A visit to this classroom-like, Porter Square noodle mecca is a study in excess, from the inevitably long line for a seat, to the overloaded bowl of pork-fatty, garlicky, jiro-style ramen, to the ceremonial sharing of dreams at the end of the meal. Arrive hungry and with an open mind, and you will be rewarded. Founder Tsuyoshi Nishioka also operates the can’t-miss udon shop, Yume Ga Arukara, located in the nearby Porter Exchange food court.