People jokingly refer to Kendall Square as “the most innovative square mile on the planet” in reference to the high concentration of groundbreaking entrepreneurial start-ups and innovative academics in the area, but we could argue that this also applies to the area’s boundary-pushing dining scene. MIT students, professors, and young professionals crowd the area’s fast-casual cafés on any given weekday, while on nights and weekends they migrate to local breweries and innovative cross-cultural restaurants clustered around Binney Street. From Italian street snacks to Afghan lamb dishes, here are some smart ideas for pulling up a seat. 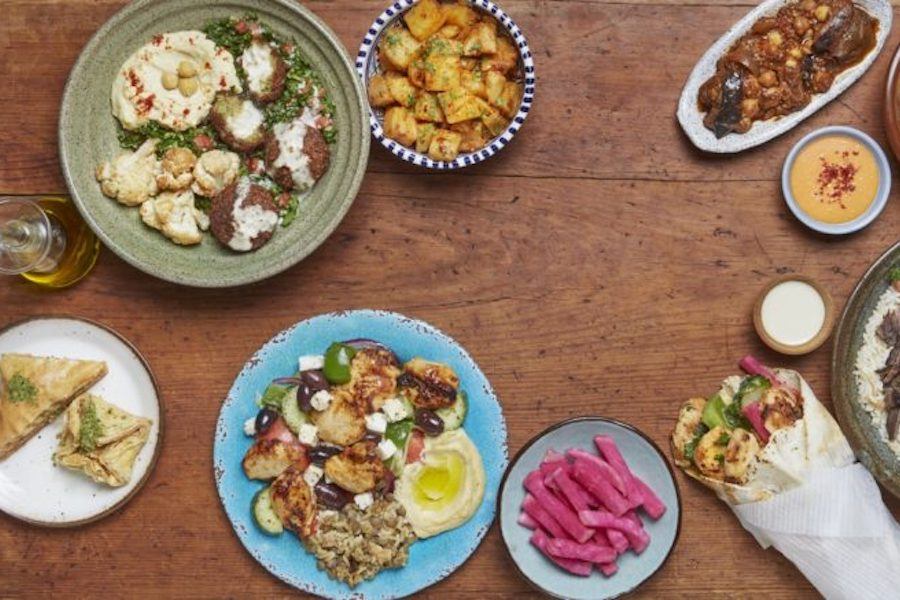 There is no shortage of great full-service restaurants in Kendall Square, but truthfully, many of the academics, engineers, and software developers working in the neighborhood only have enough time to squeeze in a quick meal at their desks on most days. If you only have 30 minutes to grab something fast and casual, make the brisk walk worth it by heading to Aceituna. The local Mediterranean chain offers filling chicken shawarma plates and convenient falafel pita wraps to keep you energized while you bang out the rest of your coding project, and the scratch-made sides—such as fattoush salad drizzled with sumac dressing and hearty eggplant moussaka—are perfect for saving for late-night snacking when you burn the midnight oil. Beats a bowl of instant ramen, right? 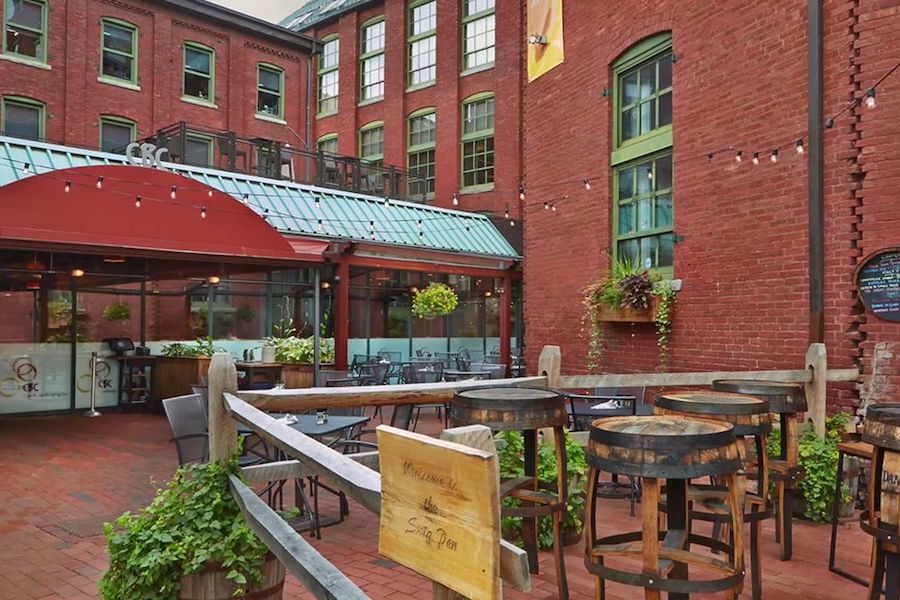 In a part of town where most people spend their workdays building robot dogs and futuristic biotech start-ups, this down-to-earth pub is a welcome refuge. Long before any of the current MIT undergrads were born, founder Phil “Brewdaddy” Bannatyne and longtime brewmaster Will Meyers were innovating the world of craft beers with their experiments in fermentation and counterintuitive brewing methods. From bourbon barrel-aged imperial stouts to obscure Polish grätzers, Cambridge Brewing Company pushes beermaking to its most creative expressions. The family-friendly establishment also happens to serve delicious upscale comfort foods—like fish ‘n’ chips (beer battered, of course) and pickle-brined fried hot chicken sandwiches—that always pair wonderfully with whatever’s on tap.

Whether you’re celebrating landing a software engineering gig at Google or schmoozing with some angel investors, Catalyst is the place to wine and dine the tech crowd. This stylish wood-paneled restaurant with floor-to-ceiling windows fits in seamlessly with the rest of Tech Square’s contemporary architecture, but it’s not as stuffy as you might imagine. The moment you step through the door you’ll hear Billboard 100 songs pumping through the speakers (and probably encounter a pair of professors toggling between bites of their burgers and tomorrow’s lesson plans). The globally inspired menu features shareable bar foods like beef empanadas and crab dip with house made potato chips, as well as more refined mains like roasted blue cod and braised lamb shank for indulging during company-funded dinners. Of course, you can’t forget about Catalyst’s chemistry-themed cocktail menu: Enjoy some C₂H₅OH (a.k.a. alcohol) in a variety of craft drinks, such as the sweet vermouth-infused “Bunsen Burner” and the caçao, coffee and vanilla flavored “Second Dose.” 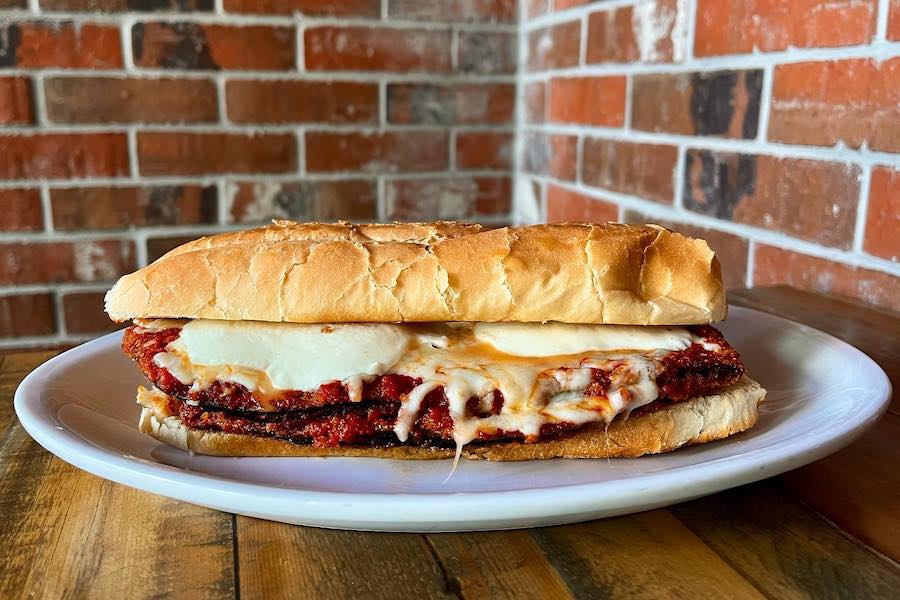 With exposed brick walls, eclectic antique furniture, and raw-wood paneled ceilings, Commonwealth Cambridge epitomizes farmhouse glamour. Despite the Americana countryside feel of the marketplace and restaurant, though, the menu is unexpectedly global: You’ll find Thai peanut salad with gingery dressing, BBQ pork tostones with avocado ranch, a hefty NY sirloin with cipollini onions, and a roasted half chicken with pan dripping potatoes. During the daytime, stop by Commonwealth’s market for hearty pastrami, fried chicken sandwiches, and duck fat fries if you’re feeling ravenous. And when you’re thirsty? Commonwealth transforms its patio into a family-friendly biergarten on warm-weather days, the perfect place to stop for a cold pint while exploring this side of Cambridge. 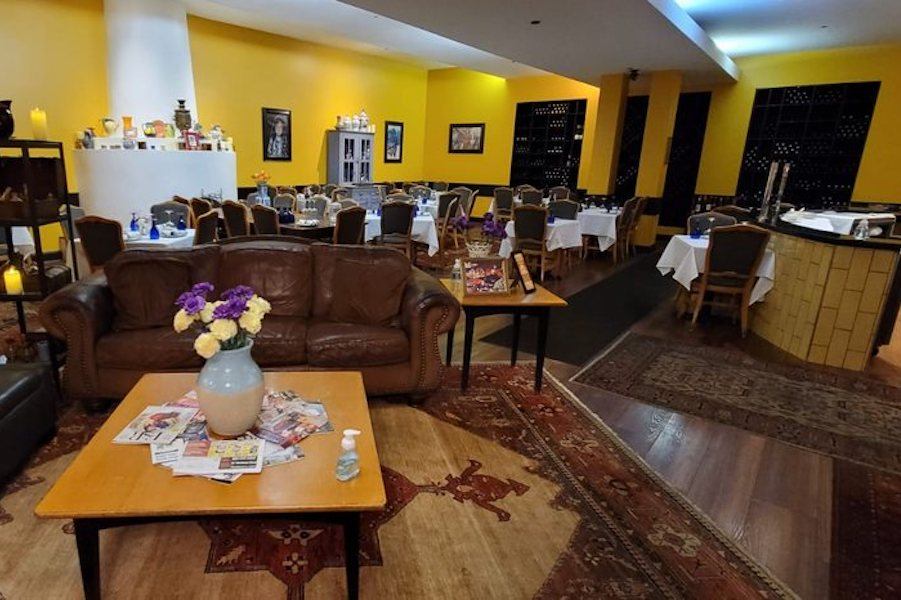 The homey interior of Helmand. / Photo by Helmand via Yelp

The pungent aromas of cardamon, coriander, and turmeric fill the air at this cozy Afghan restaurant off First Street, an inviting orangey space covered in Afghan rugs and featuring a small fireplace—you’ll feel like you’re dining in a dear relative’s living room. That said, named as it is after the longest river in Afghanistan (which is more than eight times bigger than the Charles), Helmand boasts a menu that is just as grand and extraordinary as its namesake. Start off with the baked baby pumpkin covered in a rich meat sauce; follow it up with a rack of sizzling lamb on a bed of sautéed eggplant and Helmand’s signature pillowy bread fresh from the brick oven. At Helmand’s, flavors culling inspiration from the Middle East to India offer a delightful (and delicious) lesson in historical trade ways with each bite.

The JP Fuji Group restaurant empire spreads from Quincy to the South End to Cambridge’s chic sushi spot, Fuji at Kendall. Our favorite outpost in the portfolio, though, is actually right outside Kendall Square (we’re counting it anyway): Shabu & Mein, the team’s entry that specializes in several styles of hot pot and tonkotsu (pork broth) ramen. If you’ve never had the pleasure of eating shabu shabu, it essentially breaks down to two main elements: a pot boiling with slow-simmered aromatic broth and platters full of thinly sliced proteins and vegetables. Once the slow-simmered, aromatic pots of Shabu & Mein’s popular ginger and onion-infused stock hits the table, everyone can take turns dipping and swishing raw veggies and proteins—the A5 Wagyu ribeye, for one, imbues a particularly delicious umami piquancy if you’re willing to spare the change. If not, opt for a couple bowls of Shabu & Mein’s affordable ramen: thick, chewy noodles topped with two thick pork slices and a jammy soy and sake marinated egg. 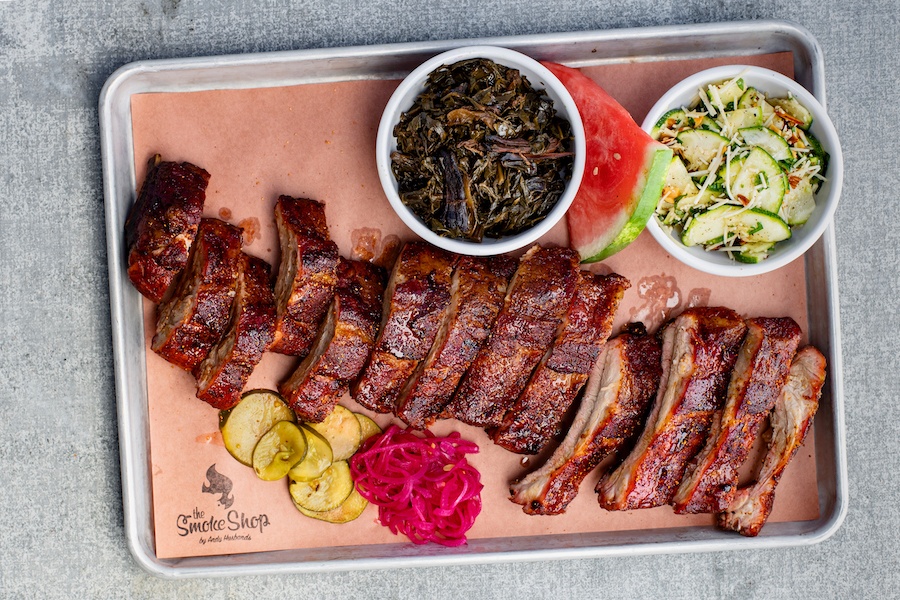 Pitmaster Andy Husbands has swept up enough blue ribbons to prove wrong anyone who thinks New Englanders can’t compete on the BBQ circuit — after all, he helped lead the first non-Southern team to win the Jack Daniels World Championship. At his Boston-area Smoke Shop restaurants, though, Husbands pays tribute to BBQ styles across the country (but not without a bit of experimentation). His aptly named “1st Place” pork ribs have a slightly crisp exterior, but beneath the layer of char lies tender meat infused with garlic and a sharp kick of vinegar from the St. Louis-style sauce. While his supple Texas-style brisket is well-known as a fan favorite, we’re also partial to his soy- and fish-sauce-marinated burnt ends sandwich, just for the record. Oh, and alongside serving award-winning BBQ, the Smoke Shop boasts New England’s largest selection of American whiskey; order up a flight to experience more than just a taste of the 240-bottle collection. 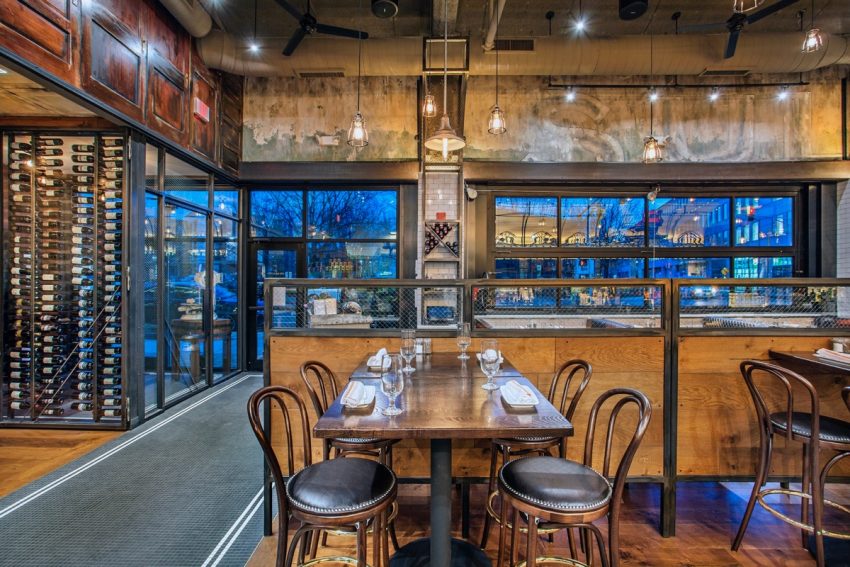 Stepping inside this bustling Italian spot in the heart of Kendall Square, it’s hard to miss the cherry red Vespa suspended from the ceiling. The theatrics don’t stop there, though: There’s also a statue of a pig (“porchetta”) mounted by the open-air pizza kitchen, which is further adorned with dried herbs and imported tomato cans—Sulmona’s bar, meanwhile, resembles an art deco train station. It’s a lot to take in, but fortunately the attention paid to the food keeps pace with the energetic decor. Sulmona’s street food-inspired appetizers are perfect morsels of Central Italian flavors, from the tender arrosticini lamb skewers to the lightly fried Roma artichokes dipped in lemony aioli. A single pizzette is enough to feed one hungry diner, but if you brought along some friends, split at least three (make sure one of them is the Quattro Stagioni with rosemary ham, mushrooms, and black olives). All of Sulmona’s pastas are wonderful as well—and the cocktails? They’re tasty and moderately priced, which is perhaps the most exciting sight of all. 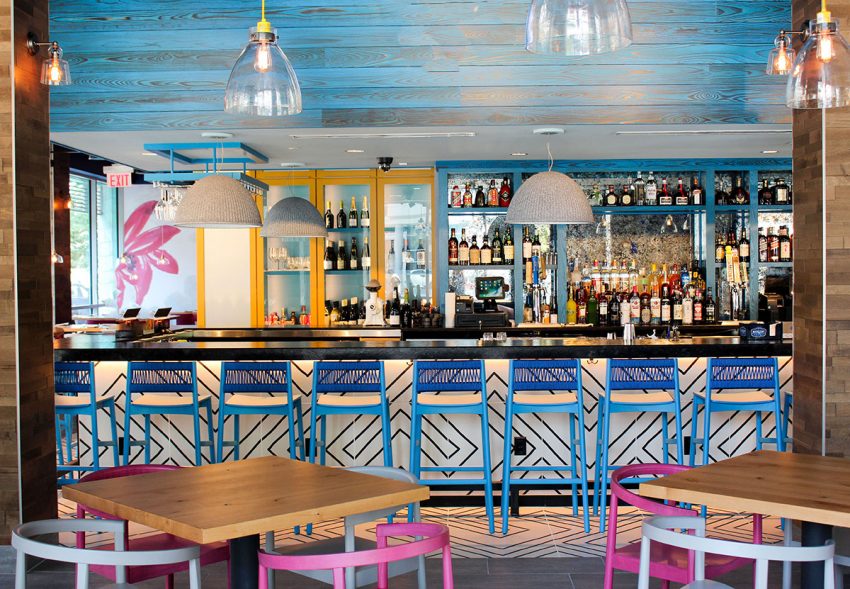 Boston has lots of culinary couples (Joanne Chang and Christopher Myers, Josh and Jen Ziskin, etc.), but none of them have folded elements of their lives into their restaurants as romantically as Sumiao Chen and Shao Zhu. The menu at their Kendall Square spot tells the couple’s love story through a series of dishes: There’s the pumpkin and millet “melted gold soup” Chen made for Zhu every day for three months while he recovered from a soccer injury. Sweet and sticky rice cakes, meanwhile, are something Zhu would trek for hours to pick up for Chen whenever she craved a taste of home. Alongside these sentimental selections, Sumiao’s menu boasts a series of contemporary takes on classic Hunan cuisine: think sizzling glass noodles scented with chili peppers and scallion, and Impossible Beef with pickled beans and fresno peppers. Finally, the vibrant décor provides a festive atmosphere for a dressed-up date night or even a milestone birthday celebration—either way, love is the most important ingredient.

Talk about evolution: When the team behind the beloved French-Canadian Café du Pays (as well as Kendall neighbors State Park and Mamaleh’s) had to shut their doors in March 2020, they quickly pivoted to becoming a pop-up grocer dubbed Vincent’s Corner Grocery. Then that grew into a burgeoning bottle shop. Now, the to-go-oriented marketplace has metamorphized yet again into a New American restaurant serving casual, seasonally focused brunch, lunch, and dinner. Vincent’s ever-changing menu is always full of surprises, but you can reliably bank on deliciously dressed up vegetables like carrots drenched in manchamantel mole, or maybe asparagus “schnitzel” with caper vinaigrette, alongside hearty mains such as masa gnocchi and miso-honey glazed quail. The intimate street-corner restaurant’s cozy half-brick, half-wallpaper-covered interior is also the perfect setting for a romantic dinner date, so think ahead and book your Friday night table by Monday afternoon.