The seaside haven at the end of the world lures with raw bars, perfect pizzas, and all the frosé you can handle. 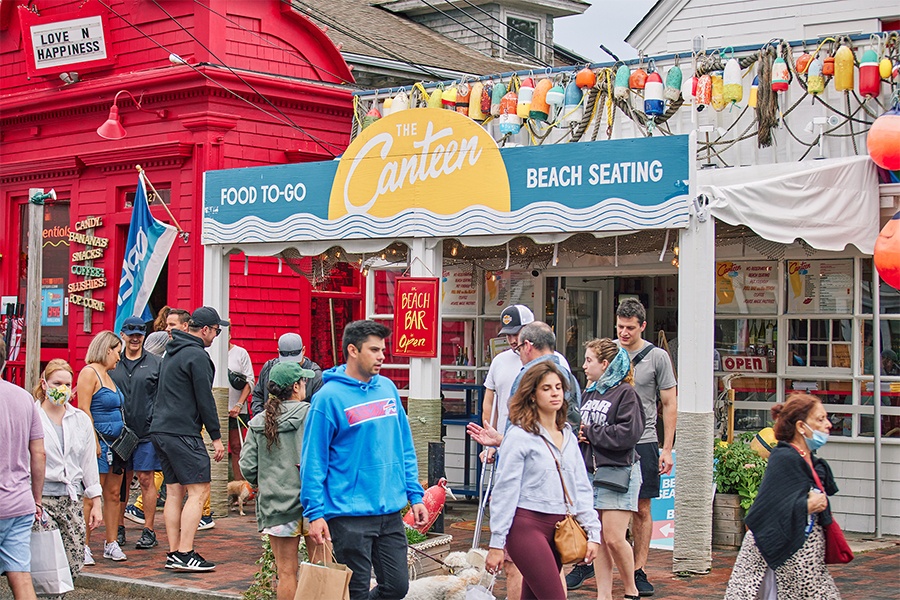 Photo of the Canteen by Brian Samuels

Let’s get one thing queer, er, clear: Among the (many) draws to Provincetown—the “everyone’s welcome” atmosphere, the natural beauty, the nightlife that draws queer people from around the world—you can also add stellar cuisine to the list. Here are some top spots to hit up during your next visit to the tip of the Cape.

Come early before the night owls wake up and swoop into this New American eatery, which boasts some of the best brunch in town. “Heaven” is right there in the name, but the delights feel downright devilish—from the tall stacks of raspberry-pecan pancakes slathered with butter, real maple syrup, and powdered sugar, to the craveable cornbread French toast. Go all in, or pair half-orders with savory brunch favorites like lobster cake benedict. Plus, with floor-to-ceiling windows that overlook Commercial Street, you can sip mimosas and savor some of the best people-watching in town.

This town institution warps reality. How else to explain the odd magnetic pull of the frosé machine that merrily churns behind the front counter where you order food? You were (innocently!) on your way to grab an iced coffee pick-me-up from Kohi, next thing you know, you’re perched on Canteen’s expansive living-roomy back deck that overlooks the water, and asking people if you can pet their dogs. Chase frosé with dishes from the New-England-with-a-spin menu—say, crab-rangoon grilled cheese, clam chowder, and fresh-shucked oysters. Plus, you’re not leaving without a serving of the legendary crispy brussels sprouts tossed in fish sauce. Hours slip by and suddenly it’s sunset. Might as well order a few home-made whoopie pies, fluffernutter cookies, and (why the heck not) another round of frosé. She just wants you to have a good time, after all.

Sick of the seashore? Hoof it to Ciro and Sal’s for a first-class ticket to Northern Italy. Dig into mammoth plates of pastas while dining in the wine-cellar chic indoor dining room with its handsome brick walls and exposed beams, or al fresco on the garden gazebo. Highlights include the chicken piccata—the fresh garlic is so worth the extra stick of gum you’ll have to pop before hitting the dancefloor later—and the silky carbonara. And the scratch-made traditional marinara? So perfect it’ll make you weep as you remember the rolling hills of Piedmont, even if the closest you’ve ever been to Italy is watching 2003 heist flick The Italian Job (again) over some Domino’s during the pandemic.

When news broke a few years ago that this restaurant, hotel, and entertainment complex in the center of town was for sale, the community held its breath. Like a million other queer spaces around the country, this spot was sure to be closed and reborn as, like, “Boutique Sub-Brand by Hospitality Giant Presents the Crown & Anchor.” Luckily, town residents Jonathan Hawkins and Paolo Martini swooped in and bought the space in late 2021, raised the sails, and set a course for a renaissance. Between the restaurant, the recently renovated inn and social spaces (including six bars), and a robust entertainment program, you can pretty much spend an entire weekend anchored at the Crown. Come for lunch and dinner at Balena, the onsite restaurant helmed by executive chef Raina Stefani, and pick over perfect calamari with pea puree, pan-roasted duck breast, and littleneck toast with pancetta. Be shore to swim up to the weekend “Divas by the Sea” drag brunch, too, where you can dive into an all-you-can-eat buffet while powerhouse drag artists Roxy Pops, Lakia Mondale, and Mackenzie make waves.

While Sarah Paulson chewed scenery here during last year’s Provincetown-set season of American Horror Story—co-creator Ryan Murphy has a house in town—you can swing by to chew some stellar New American cuisine. Close your eyes and point to anything on the menu and you’re likely to love your fate-appointed fare. But standouts include the heavenly lobster dumplings in a ginger-lemongrass broth and the rosemary-marinated Colorado lamb chops. Not to mention the garlic and herb breadsticks with clover honey and house-made citrus and truffle-salt butter that are just…*chef kiss.* Since you’ve likely been noshing nonstop on seafood, opt for the punchy and spice-forward mews vindaloo, served with rice, chutney, and crispy naan with those perfect grill marks. Save room for the key lime pie with mango coulis, too. 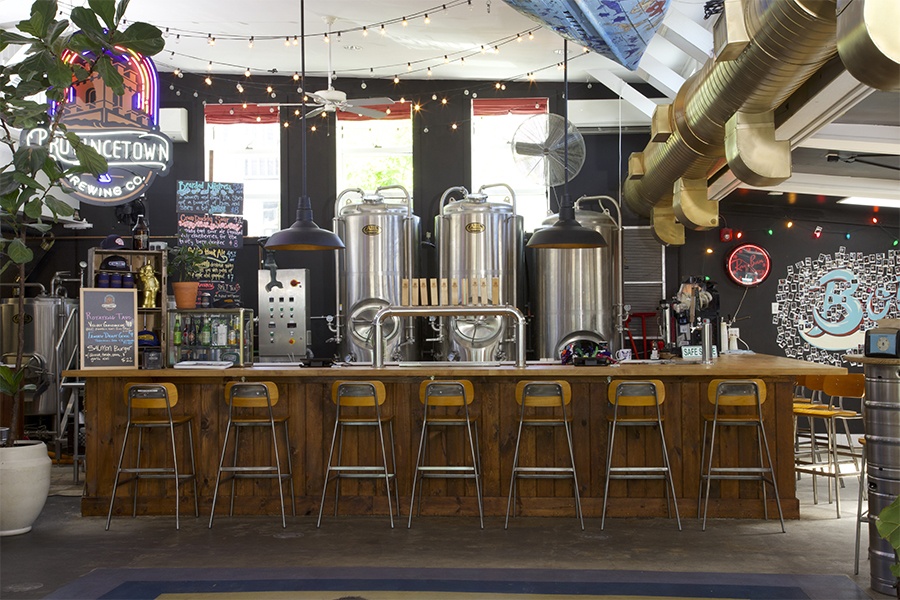 Thanks to their draft-ivism program—where 15 percent of all profits benefit non-profit partners like Center for Coastal Studies and the AIDS Support Group of Cape Cod—hitting up the town’s only onsite brewery basically counts as philanthropy. In other words, go ahead and order several more rounds, toasting with a juicy Double Rainbow IPA and the refreshing and crushable Golden Hook Ale. The menu leans into the homey pub-grub that everyone loves, such as the kicking jerk-chicken sandwich with house-made slaw, a few lighter salads, and the new PBCo burger, which sees an 8-ounce patty of ground sirloin and tenderloin topped with Cobalt cheddar and chipotle aioli. And since the brewery is one of the town’s most hopping social spots—between trivia nights, movie nights, and the “hey, here’s where all the lesbians are in town!” Sunday Dyke Dock parties—bring your best buds and pour over the shareable plates. Ginormous fried mozzarella sticks tempt with gooey goodness and the artichoke cakes might have you ditching their crab cousins for good.

With surprisingly robust breakfast offerings, larger entrees, and quick street eats, you can rollick through Rosie’s menu for every meal and never run into a miss. Start your day with scrambled egg dishes like the huevos con chorizo, which pairs eggs and smoky chorizo with rice, refried beans, and three corn tortillas. Other offerings hit all the basic food groups: cheese (the melty and beautiful quesadillas, awaiting a guac dunk); meat (the enchiladas stuffed with shredded chicken and slathered with your choice of sauce); and rice (the burrito bowl with the so-good-you-could-skip-the-toppings Mexican rice). With a little luck, the house-made mole enchilada will be the special of the day.

Hours are infinitely happier at this historical inn’s raw bar happy hour, hosted daily from 2-4 p.m. Breeze in for stunning ocean views and often rotating ceviche specials, plus Wellfleet oysters and clams at $1.50 a pop, best washed down with an Earl-Grey-infused gin tea-tini. Or, if you like your cuisine kissed by some heat, check out the chicken liver pâté with all the trimmings, and the mix- and- match sliders with Kobe beef, lobster, and crab among the mini mouthfuls.

Please consider this my petition for Spiritus to win a James Beard Award in the category of “Outstanding Restaurant that Caters to Nightly Hoards of Drunk Gays: Northeast.” When the bars close at 1 a.m., the staff at Spiritus hunker down with unbelievable grace and dish out perfectly thin and crispy pizza to the masses. Slices at the cash-only spot are cheap: $3 for cheese, $4 for pepperoni and the killer Greek with black olives, feta, onions, and spinach. But what they lack in the town’s absurd price inflation, they make up for with million-dollar flavor. And do hit up the quiet and casual back garden for dinner on the cheap (a wallet breather after dropping $100 for two rounds of planters punch at tea dance). Call in a pie—say, the Spiritus special with veggies, linguiça, sausage, garlic, and (trust us) anchovies—and wash it down with a buzz-bringing espresso shake.

Since everything about Ptown is more than a little extra, here’s a quick-hit list of where else to eat.

On Sundays, order a malasada, or fried dough tossed in sugar. Eat your malasada in the street. Dust the sugar off your hands. Turn around, immediately order three more malasadas.

While this Jamaican eatery has pivoted temporarily to only catering orders (thanks, pandemic), we’re refreshing Instagram regularly for news about when to dash in for more exceptional goat curry.

I don’t care how much of a foodie you are: The chicken tenders and French fries plate served at the hotel’s poolside grill is culinary euphoria—best enjoyed with your feet in the water as you sip a frozen mudslide.

“I’m just going to pop in for a peanut butter cup,” you say, then get ice cream and leave with $30 worth of truffles, caramel turtles, and slabs of English toffee.

Before making that long trek out to Herring Cove Beach, stop in for fancy sandwiches and salads, with the Agent Dale Cooper sandwich (turkey breast, cheddar, avocado, pickled shallots, and more) proffering peaks of flavor.