Where to Find the Best Tacos in Boston

There are a lot of creative twists on the concept available around town.

Tacos may feel like summer eating, but that doesn’t mean you can’t enjoy them year-round. If you’re looking for some of the more traditional variety, try those highlighted in our guide to the best Mexican food in Boston. But if you’d like to venture into more creative territory (think: poached lobster or jackfruit tinga), read on. Pair them with a refreshing drink, and you’ll be set whether it’s the dog days of August, the chill of February, or any old Taco Tuesday. 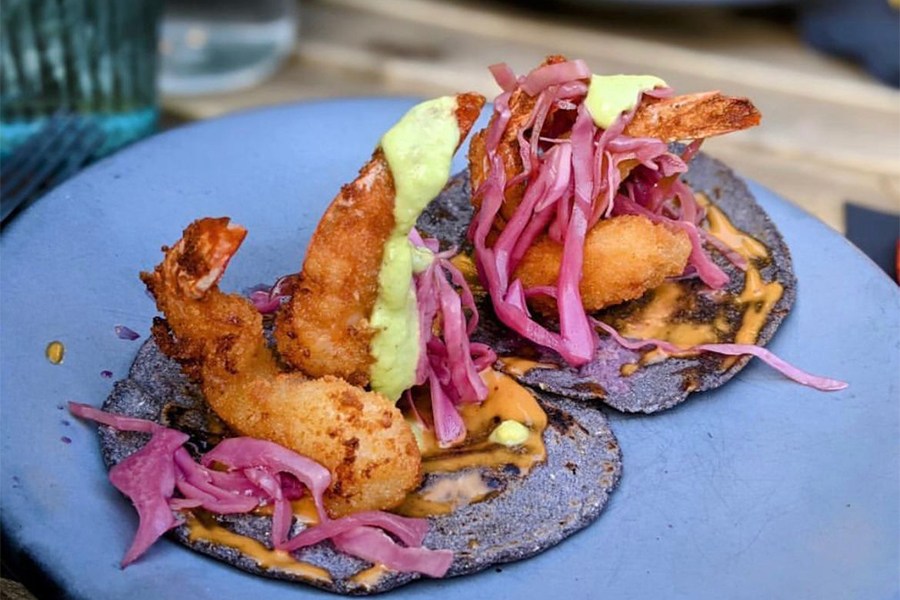 Head out to the back patio of this Union Square oasis, and immerse yourself in the flavors of Mexico City. At Barra, blue corn tortillas are handmade and treated as an essential ingredient, while salsas are prepared in a mortar. In the crispy fried shrimp taco, the seafood is breaded in panko and only lightly fried, so that its freshness stands out, and then it’s served with pickled cabbage, morita mayonnaise, and avocado salsa. Or try the thinly sliced, beef taco, served with grilled cactus that has citrus accents and a distinctive texture. You’ll want to order seconds when it comes to the al pastor fish tacos, which typically feature either blue cod or red snapper, accompanied by grilled pineapple, cilantro, onions, and green salsa. All the tacos are prepared with a focus on balance, so no one taste overwhelms the whole.

While there are plenty of meat options at this Jamaica Plain taqueria, look out for the eclectic vegetarian tacos on their menu. The crispy yuca is a crunchy, savory favorite, filled with fried croquettes, topped with a pickled kale curtido, and rounded out with chipotle aioli. The chipotle cauliflower, roasted with peppers, comes with a house-made, whipped crema and tomatillo salsa. Or savor the tofu taco, soaked in an adobo marinade, with paprika, vinegar, Mexican oregano, and chilis, before the bean curd itself hits the grill. Finally, don’t forget to try the fried Brussel sprouts tacos, which achieve a bright pop from the addition of pomegranate, a salty edge from cotija cheese, and a nice, light crunch from the pepitas. The corn tortillas are house-made every morning, and with plenty of choices to pick from, Casa Verde hopes to keep everyone satisfied.

Dig into these superlative tacos, and you won’t regret it. At this Baja-inspired restaurant that blends together the coastal cuisine of Southern California and Mexico, the sure standout is Buttermilk’s Nashville hot chicken tacos. Crunchy and with fresh, succulent meat, the taco gets its Tennessee identity from a medley of spices and comes served with white barbecue sauce. Turn to the juicy lobster tacos, poached in pure, clarified butter and deriving fruity accents from the peach salsa. You’ll want to savor the battered fish tacos, which are prepared with a coating of beer, pastry flour, and tamari powder. Enjoy them with a cabbage slaw and aji amarillo tartar, a sauce made with mayonnaise, capers, cornichons, and yellow hot pepper paste.

For a delicious and cool, summer spin on the taco, why not try one made of ice cream? Honeycomb Creamery makes their own twist on the ice cream truck classic, available to taste every Tuesday, and changes up the flavor every two weeks. Right now, their special is the smores taco, made with a chocolate waffle cone, filled with malted vanilla ice cream and torched marshmallow. The treat is also dipped in chocolate shell and rolled in graham cracker. In the past, they’ve served a blueberry crumb taco, made with homemade jam, oat crumb, and ice cream, contained within a vanilla shell. Fans of the shop may also fondly remember a prior incarnation of the special: the Elvis, which (naturally) used peanut butter ice cream and brûléed bananas, topped with bacon. 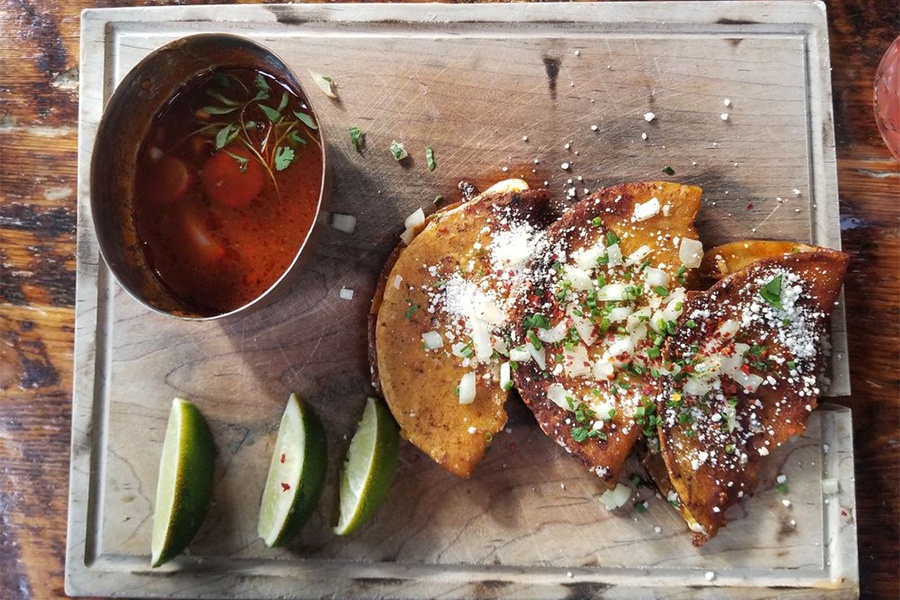 A bustling taco and oyster bar in South Boston, with a bit of an edge? We’re in. When you head over to Loco, you’ll be blown away by their impressive range of eats. The birria tacos, made with Jalisco-style braised short rib and served with Oaxaca cheese and dipping broth, are a crowd pleaser. But look to some of their more creative options as well, like the chicken pesto taco, doused in sundried tomato puree, chili vinaigrette, and topped with fresh mozzarella. For a fun vegetarian pick, see the cauliflower taco, served with chipotle grilled broccolini, sweet onion sauce, and crispy shallots. And of course, the Cajun blackened tuna, made with diced fish tossed in a mixture of spices, is a unique and slightly spicy choice, garnished with cherry tomato pico de gallo.

This Allston based spot has always strived to be an innovator, concocting Korean fusion dishes. Their tacos are the perfect example of this blending of Asian and Mexican cuisines, and to see the marriage at play, you need look no further than the bulgogi beef rendition. It’s filled with thinly sliced meat, marinated in soy sauce, apple juice, and sesame oil. Meanwhile, the Korean chipotle pulled pork is one of the restaurant’s star attractions, an experiment that combines Mexican chipotle sauce with Korean red pepper paste. All of the tacos are served with a vegan kimchi that is regularly made in house, using apples, napa cabbage, rice flour, and sugar. With a fresh flavor, the kimchi has just a slight, subtle kick. 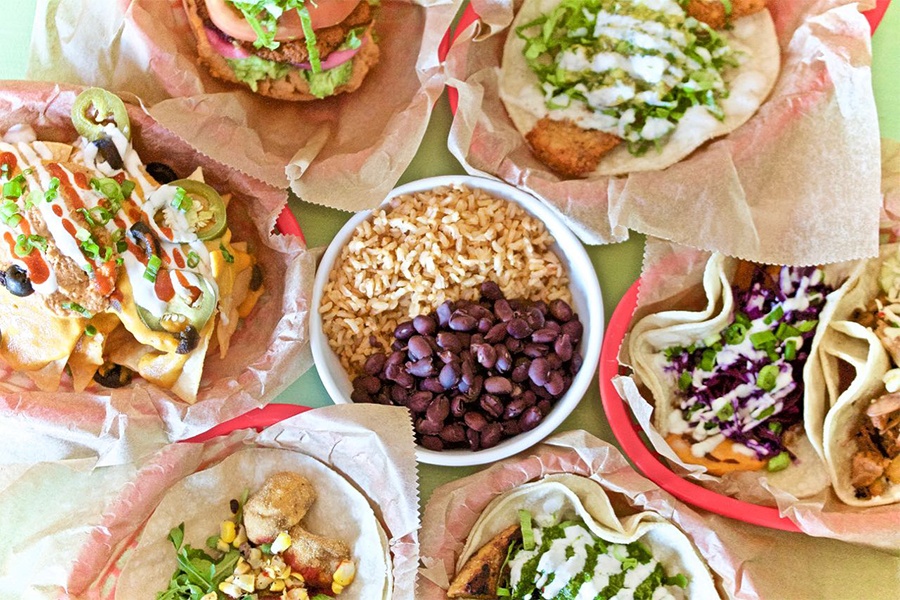 The Somerville staple started out as a food truck in 2013, frequenting areas like Northeastern University and Back Bay. Since then, Taco Party has become a colorful, slightly kitschy brick-and-mortar, doling out inventive vegan bites. See the chimichurri tempeh, doused in the signature green parsley sauce, and drizzled with creamy, fatty cashew crema. The jackfruit tinga taco makes use of fruit that is not too ripe, giving it a less sweet, more neutral flavor, so that it can absorb the umami-packed, tomato tinga sauce that it’s soaked in. You can’t pass up their spicy classic, the chorizo seitan, flavored with smoked paprika, cayenne, chili powder, and chili flakes. Owner Keith Schubert said that Taco Party aims to take plant-based food and make sure that you don’t miss meat at all, in order to “transcend the chasm.” We think they do.

There’s a reason why Villa Mexico Café is the reigning Best of Boston winner for best tacos. The mole poblano tacos, which feature shredded chicken and beans, come in an outstanding sauce, which integrates tomatoes, cinnamon, white bread, and even chocolate. When you sample the marinated beef tacos, you’ll find that Villa Mexico serves up grilled, chopped steak, with the signature, house black salsa. The restaurant is women-owned and operated, as chef Julie King and her daughter Bessie have been running the space together for the past 21 years.