Eight of the Best Takeout Spots in Roxbury

From marvelous mofongo at a new Dominican eatery to fantastic fried-seafood platters at a classic diner, here’s your must-try neighborhood guide.

Let’s skip the guilt-based, crazy-restrictive New Year’s dieting resolutions this year, shall we? Instead, we should resolve to support as many local restaurants as we can. There are certainly plenty of options in Roxbury, which is flush with a wealth of cuisines—from Dominican garlicky mashed plantains to blissfully lip-burning Ethiopian stews. (And don’t forget the sunny Southern-inspired fare at Soleil, which is one of Boston’s 25 hottest restaurants right now.) So put down the bowl of wilted kale salad and pick up the phone. See? This year is already looking up. 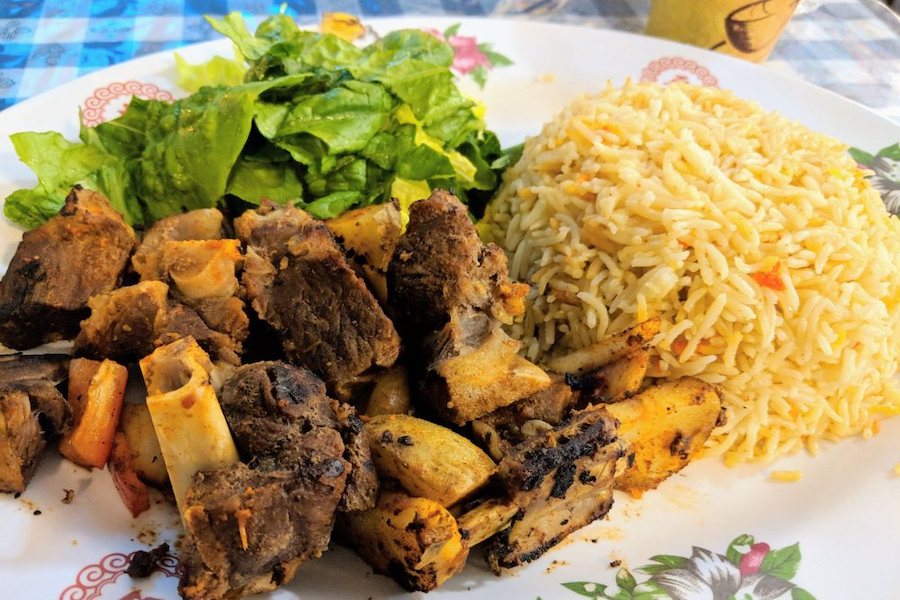 Goat and rice from Ashur Restaurant. / Photo by Igor R. via Yelp

This halal neighborhood mainstay, open since 2007, serves up gigantic portions of North African and Middle Eastern fare. Savor chunks of braised lamb, goat, or chicken simmered in rich, cumin-spiced sauces and served with heaps of rice that are delicately spiced with clove and cardamom. (Don’t worry, there are shareable “sport plates” of two meats, for when you can’t decide.) Other standouts include the beef biryani with mixed vegetables and the breakfast of spongy Somali anjero bread with suqaar,  a dish of diced and seasoned beef that will definitely replace any rote bagel sandwich as your daily habit.

The vegetarian fare at this Ethiopian eatery, which has a sister spot in Somerville, is enough to tempt even the most die-hard carnivores. Case in point: the kik alicha stew of split peas with garlic, which owes its vibrant yellow color (and much of its earthy flavor) to turmeric. Robust flavors of chili, curry, and black pepper, meanwhile, sing in the tegabino shiro, a stew of roasted chickpeas; the spicy yesom firfir—spongy injera bread soaked in kicking sauce of berbere garlic, cinnamon and more—is not for the faint of heart, either. Still searching for meat-based eats? You can’t go wrong with the Cafe Special: strips of beef with sautéed onion and green pepper, dished out with a mound of injera to sop up the robust, garlic-forward sauce. 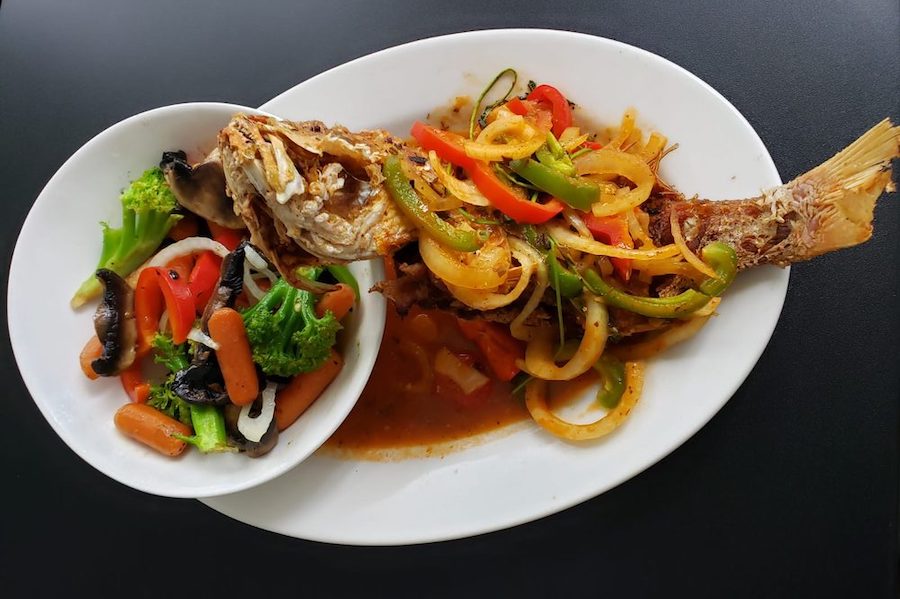 On a gray winter day in Boston, this cozy spot offers a welcome escape to the bright flavors of the Caribbean. From the sizzling chicharróns to the warming seafood stew, the sprawling menu has something for everyone. But do yourself a favor: skip to the list of house specialties, where baked haddock with crab meat and breadcrumbs beckons with its zinging lemon-butter sauce. Indeed, seafood is a specialty here—see Fish Fridays, when you might celebrate the weekend with whole, crisp-finned fried halibut. But take time to savor the menu’s parilla section of grilled meats, too. The steak owes its tender texture to a long soak in a citrus-spiked marinade and comes with zesty mojo sauce and a choice of side, such as caramelized-edged fried plantains.

You might be tempted to skip to the dessert menu at this family-owned Dominican restaurant, which opened in Egleston Square in the fall. After all, the sweet treats top out at just $3 but boom with flavor, from the silky majarete corn pudding to the flan with all of its caramelized decadence. But flipping to the menu’s epilogue would mean missing out on mains like the mouth-watering mofongo, which comes topped with pork skin, sausage, or a host of other goodies, as well as long-simmered soups and stews of beef tripe or shrimp. And of course, you wouldn’t be able to experience the excellent breakfasts, which combine yucca, cassava, and fried eggs for a salty-sweet and starchy start to the day. 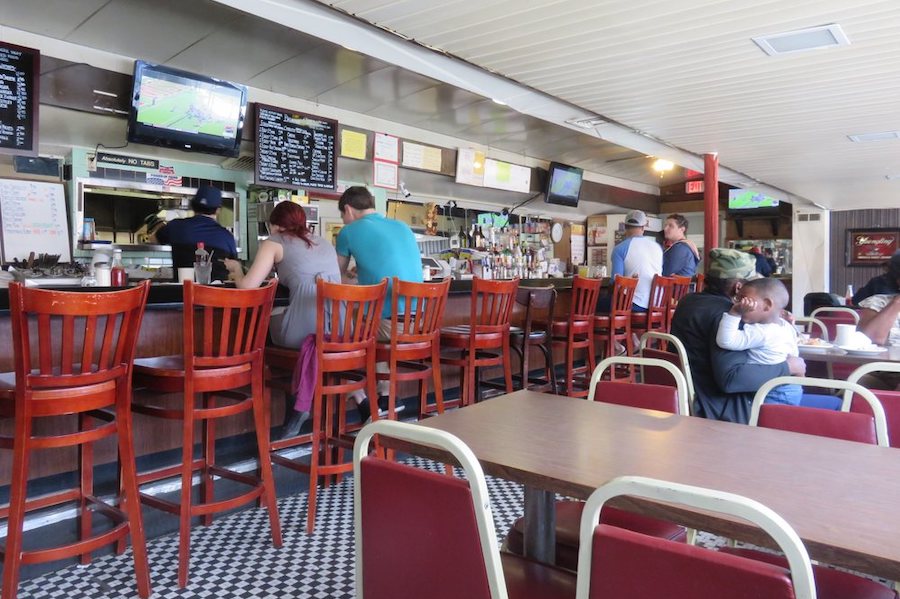 The interior of Liberty Diner in Roxbury. / Photo by Vivian C. via Yelp

Liberty dishes out the kind of stellar, no-frills grub you crave when you roll into a diner. Think: classic egg plates with crispy sausage patties or links—plus butter-slathered toast and grits or home fries—as well as enormous omelets, like the (appropriately named) Everything that bursts with a bucket of meats, vegetables and cheese. (The house-made hash, meanwhile, is made even better by tossing it in an omelet and slathering it with cheese.) Lunch options range from fisherman’s platters piled with fried goodies—scallops, shrimp, clam strips, haddock served with golden fries and slaw—to salads and club sandwiches. Opt for pumpernickel on the latter, as the dense bread is all the better for soaking up the thick layer of mayo. 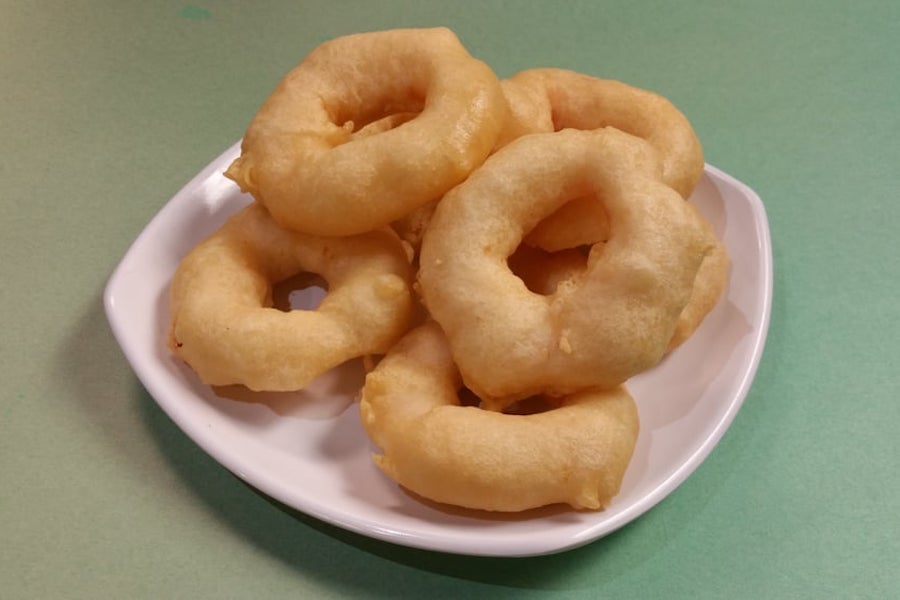 Consider yourself lucky if you stumble upon this longtime gem, open since 1997. Come hungry, too, and ready to dive into takeout of titanic proportions; even the mini platter options—combos of boneless spare ribs, chicken fingers, and pork strips—are enough to feed a small army. Of course, it’s hard to get enough of Lucky’s classic Chinese-American comfort food, from the General Gau’s chicken, with its chunks of deep-fried meat tossed in fiery brown sauce, to the heaps of fried rice dished out with loving portions of tender pork. Other specialties include the Prince Teacher-style meals, derived from Szechuan tradition, which spotlight meat and peanuts simmered with scallions and peppers in a dark, kicky sauce.

Soul food flavors explode at Maxine’s—behold the baked mac and cheese with its gooey center just under that crispy crust, the vibrant collard greens with smoked turkey, and the mashed potatoes loaded up with butter and garlic. Other favorites include fried chicken and waffles with dollops of butter, baked or fried haddock (served up with two sides), and the cider braised cabbage, which offers just the right bitter bite to balance sides of mashed sweet potatoes. Finally, take a trek to New Orleans via the chef’s special jambalaya—which is easily two meals if you don’t give into your “one more bite” cravings—as well as the Cajun-seasoned shrimp and grits with a cayenne kick. As for the po’boy sandwich? It’s perfection, served on house-made French bread with Cajun mayo and special sauce.

Merengue’s meals dance on the taste buds, with the mofongo taking center stage. Order that dish of fried and mashed green plantains straight-up, served with chicken or pork, or accompanied by a duet of both proteins. Speaking of plantains, the tostones are a thing of beauty, too, stuffed with lobster in a rich, brothy sauce or served as flat, snappy discs of deliciousness for dipping. Need something to wash it down? While you can’t hit up Merengue’s bar at the moment, you can bring some revelry home with their mojito kits, including a bliss-inspiring take with passion fruit; the elixirs are scratch-made, and well worth waiting out the 24- to 48-hour advance ordering required.