Planning to hit the road? Here's where to fuel up along the way. 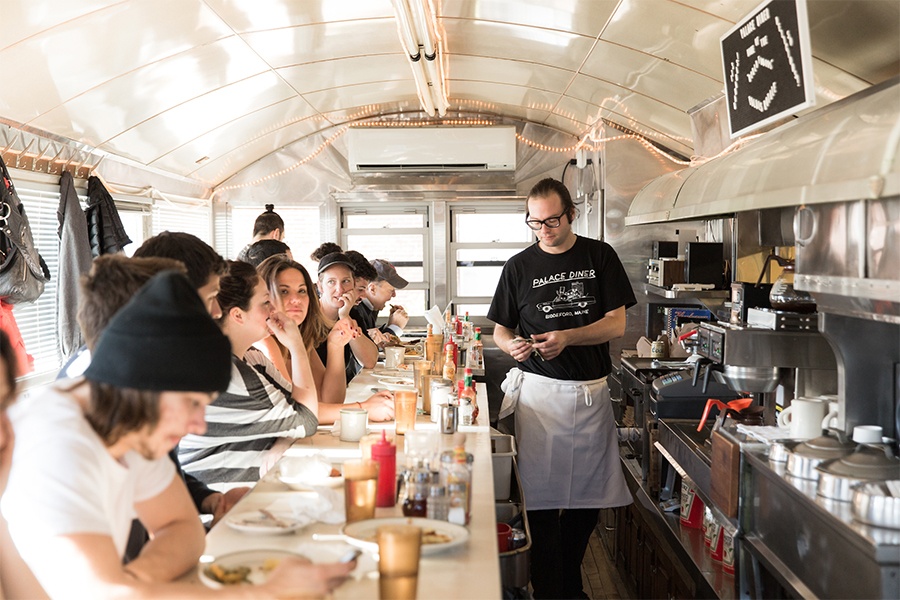 Whether it’s the aroma of crispy golden hash browns or the stainless steel facade that looks like something salvaged from the 1964 World’s Fair, roadside diners have a timeless allure. Here in New England, the hills, valleys, and shorelines are clattering away with family-run eateries that have been cranking out comfort food, bottomless coffee, and salt-of-the-earth small talk since the New Deal years. Wherever you’re driving, odds are there’s a nourishing diner somewhere in the vicinity waiting to feed you. Consider these six New England institutions:

The oldest diner in Maine was welded together in Lowell by the Pollard railroad car company in the 1920s and shipped to the town of Biddeford, half an hour south of Portland. Since then, the Palace Diner has dished up heaping portions of eggs, bacon, and pancakes in a barrel-roofed, stainless steel interior. (It’s one of only two Pollard dining cars left in the world.) But in 2014, the Palace was acquired and renovated by Chad Conley and Greg Mitchell, who met in the fields at Four Season Farms in Harborside, Maine. The diner still offers a mere 15 counter seats and the original spearmint-shaded floor tiles, with a hefty menu of classic diner fare prepared with extra attention to culinary detail. (Buttermilk-brined fried chicken, anyone?) It’s cash-only, so be sure to swing by an ATM first.

Nestled between two buildings, steps away from Greenwich Cove and Narragansett Bay, the baby blue facade of Jigger’s Diner beckons to anyone with an appetite and an appreciation for history. Launched by Vilgot “Jigger” Lindberg in 1917, the diner has gone through several evolutions. Its current shell—a Worcester Lunch Car Company dining car—was purchased during the 1950s, before a mid-’80s closure saw Jigger’s Diner reduced to a storage facility for a neighboring paint store. But an ambitious restoration effort during the 1990s saw the diner resurrected in recognizable form, with some new additions, such as booths from the old Colonial Diner in Brockton, Mass. And then there’s the menu itself: Locally-sourced ingredients vamp up dishes like latkes benedict, the eggplant veggie burger, or the stone ground cornmeal Johnnycakes—a Rhode Island culinary classic.

The evergreen woods near Ossipee Lake hide many secrets, and one of the sweetest is located in a blue barn-like building off of Route 16. It’s not often that you can stroll into a diner and see the founder offering new baked goods for the customers to taste-test, but that’s the way things still work at Rosie’s Restaurant. Owner and culinary mastermind Rose Scolaro launched her own diner in 1986 and since then, Rosie’s has developed a ravenous following on the strength of creations such as the Danish-style stuffed French Toast, made with fresh fruit and homemade bread. (Belgian waffles with strawberries and whipped cream also draw raves.) The interior of Rosie’s is pure Granite State, with lots of wood, decorative cast irons, and countertop dining space. The diner even bottles its own maple syrup, which you can bring home to spruce up your own pancakes.

Central Mass. was once a hotbed of diner car manufacturing, and the most decadent way to honor the region’s legacy is by paying a visit to the marble counter of Boulevard Diner. Tucked away in a residential part of Worcester near the railroad tracks, the Boulevard is still housed in a Worcester Lunch Car Company car that sports bright neon lighting on the exterior at dawn or dusk. But the diner is more than just a time capsule to a forgotten era. The breakfast, lunch, and dinner menus reflect the neighborhood’s Italian-American heritage, with diner staples such as salisbury steak listed alongside specials like manicotti with homemade pasta sauce. Owned and operated by the George family since 1969, the Boulevard was added to the National Register for Historic Places in 2000. But somehow, the homestyle cooking and homely ambience feel as savory as ever.

In the heyday of American diners, expressions like “grass-fed” and “sustainably-raised” would have drawn blank stares. But in true Vermont fashion, Brattleboro’s Chelsea Royal Diner has imbued a 1930s railroad diner car with a stacked menu of inventive, locally sourced diner noshes. Using ingredients from their own vegetable garden and from local farms, the Chelsea Royale dishes generously-portioned entrees like the breakfast cajun skillet and the grilled jerk chicken salad. Weekly “blue plate specials” are paired with menu themes such as Mexican-inspired cuisine on Tuesdays and Prime Rib Fridays and Saturdays. And the Chelsea Royal offers its own house ice cream, made with cream and milk from St. Albans Creamery. Indulge with a big cone, take it to the outdoor tables, and note the timeless beauty of the green-and-beige railcar against a Vermont sunset.

The gleaming steel, neon accent lights, and red leather booths at George’s Diner are just as fresh as the menu itself. At this coastal Connecticut eatery, 1950s aesthetics meet the creativity and global influence of modern dining. Under the ownership of the Anthis family since the 1970s, Georgie’s has boasted a constantly evolving diner menu with XL-sized temptations such as the “Seoul burger” with kimchi, bacon, and cheese sauce, or the spanakopita with organic swiss chard and leeks. But the attention to detail at Georgie’s is the real secret sauce. The breads are baked onsite, the juices are hand-pressed, the menu boasts a variety of gluten-free offerings, and the diner team even mills their own flour. Just be sure to leave room for a gooey slice of Belgian Death Cake.