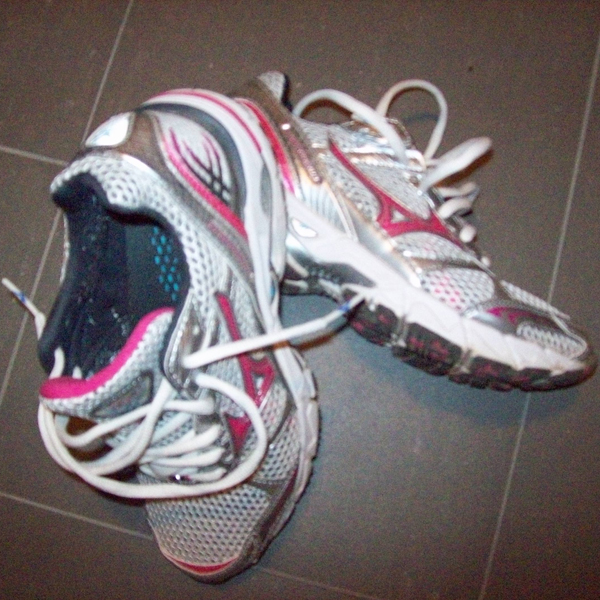 After completing six marathons and not getting any better, I hung up my marathon shoes and focused on halfs. And then I became a better runner. I decided I could qualify for Boston 2011 with one more race, and I did. So Boston would be my last marathon. My training for Boston was rocky, with some illness and minor injuries. The weekend of the marathon, I was so nervous I could barely eat. Imagine, so silly. I had a great race (meaning my time was great) up until 30k when I got horrible calf cramps. I walked a lot and was grumpy. I still managed to re-qualify, but told everyone: “I’m glad that’s done. Never again.”

But then I ran another marathon to qualify for 2013. I had to go back. Boston is the BEST place to run a marathon. I didn’t want to go back for the course: I can run 26.2 miles anywhere. I didn’t want to go back for the bus ride and the hours of waiting. I wanted to go back for the spectators. Even before the race, everyone asks if you are running and then wishes you good luck. Boston 2013 would be my last marathon (really). But I had to do it right. The first time I ran it, I wore earphones and worried too much about my time. Now I was going to go back and enjoy the most wonderful spectators ever! And I did. I didn’t wear earphones (a first). I planned to be much slower. I high-fived so many people. I laughed at the signs. I ran 75 percent of the race with a huge smile on my face (still pretty good … it hurts to run a marathon no matter how fast you go!). The crowds surpassed my expectations, and my expectations were high.

I crossed the finish line 20 minutes slower than my qualifying time, and I couldn’t have been happier with my time. I crossed 3 minutes before the bombs went off. I didn’t even have my medal yet. I felt the same as so many other people felt. Where was the next bomb going to go off? Was I going to die? We heard the bombs. We felt them. We saw the smoke. But we didn’t see the damage. Where I was, it was amazingly calm. And that has made it seem like I wasn’t really there … it was like a dream (a nightmare). I felt ridiculous getting my medal. It seemed so irrelevant when two bombs just went off, but I had to walk by so I took the medal. Once I got over the fear of more bombs, I was just so scared for my family who was hopefully waiting to meet me at Boston Common. And then I walked past the buses with our bags. People were still getting their bags, so I did, too. The volunteers were just doing their job like nothing had happened. I tried to be calm and just walked as quickly as I could to find my family. My 12-year-old son and my husband were waiting exactly where they said they’d be. As soon as I saw them I just started sobbing. They had no idea what had happened. They never had to worry about me. I found my family 20 minutes after it happened, not hours like for some. 2013 was to be my last marathon.

And now, again, I have to go back. I’m the girl who cried “last marathon”—no one believes me. So I have to run another marathon to qualify. And I have to run fast because the running community is so awesome that they want to show their support and go back, so the competition will be stiff. I ran 2013 because I wanted to enjoy the best spectators in the world. They did not let me down! I am so angry that these spectacular people are the ones who were hurt by the bombs. Even the day after, as I’m standing alone with my family’s luggage, wearing my Boston jacket because it is the only jacket I brought, several Bostonians stopped to talk to me. They all said the same thing: 1. Are you OK? (yes) 2. Is your family OK? (yes) 3. Did you finish? (yes) 4. Good 5. We’re so sorry.

You Bostonians are fantastic! See you 2014!