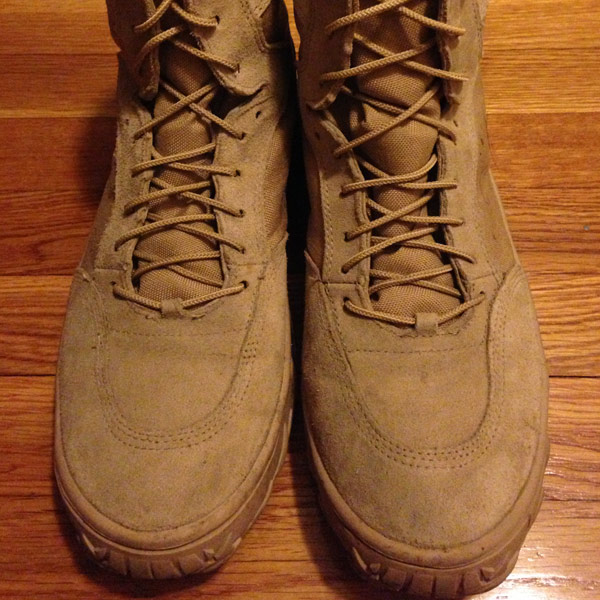 The Tough Ruck 2013 is the group I put together with the Military Friends Foundation, who provide support to families of soldiers. When a soldier puts their rucksack, on we have to have everything on that rucksack that allows us to survive. There’s a meaning behind our rucksacks, meaning for foundation, and meaning for what we do. It’s not a 26.2 mile stroll.

We started at five in the morning. At that point the cars are still on a road, and we were walking in a single file line, with our safety lights on. Safety is paramount. I was the highest ranking person there, and if anything had to happen, and if anything did happen, I would be in command, and be responsible for the health and well-being. I had to be able to track them down. I had to make sure I had phone numbers, aid stations, and our rally point picked out: the closest corner to the Boston Public Library. People have different paces—some doing 13 minutes, others doing 18 minutes. It’s not a race for us, it’s there so we can finish and honor our fallen comrades.

The crowd was out and energizing the athletes, and the day itself was awesome. People and kids were out there. We just passed the halfway point and no one had passed us yet, and there was a little girl and I think it was her brother—they couldn’t have been four or five—they were writing in the street in chalk. Coloring on the street. There was another point where we were in Brookline, it was warm and hot. We were in full uniform and we have that beastly rucksack. Little kids handing out popsicles. As we walked by, well, I can’t deny a child handing me a popsicle. The popsicles it were like someone booted us in the butt. It was awesome. The sugar jolted us. We’re encouraging the runners, and the runners were encouraging us.

Myself and my first sergeant walked across that finish line at 2 p.m. We were getting a sense for where everyone was. We sent the folks with the beaten-up feet to see the podiatrist. One of our soldiers had literally just come across the finish line at 2:40 p.m. He was the last soldier that was part of the Tough Ruck crew.

Three of us, my first sergeant Bernard Madore, staff sergeant Mark Welch, and I were having a conversation about how to get everyone back to Hopkinton when the blast went off. I had my left shoulder to it and turned to it as the smoke had already plumbed out. It was a fraction of a second. I thought: This isn’t a prank. The switch turns on, and it’s go time. We went into what we were trained to do which is to react. Madore, Welch, and I ran toward the blast area. Welch went toward the bleachers, while Madore and I went onto the course itself. We were under the media bridge when the second blast went off.

At that point, the smoke is starting to clear up, and we could start to see the mess. After the barricades came down, we started pulling burning debris off of people, trying to get people off of people. First responders were there trying to stop the blood. Trying to find rags for the people were already bleeding. Limbs were blown off. It was a complete mess.

Then I saw a man who was completely covered in blood. Smoke was coming from behind him, and I turned him around and his butt, and his shirt were on fire. The contents of his pocket were still smoking so I patted that out and handed him over to the medical tent.

People are saying was it like a war zone. We’ve been saying it’s worse. Madore and Welch have been on two combat tours. I’ve never been on combat tour but was a former EMT. Between that and their four tours, it was worse than anything we’d ever seen. What we saw was unbelievable.

The way I process it is the same way I deal with any situation. Nurses, doctors, people in the military, first responders, you have to be able to not think about the emotional part, you have to think about the safety and health and protection of those people. Every second seems like a minute, every minute feels like an hour when you’re moving from person to person, or moving debris. You’re just trying to focus on your own progression and moving forward.

—As told to Boston magazine