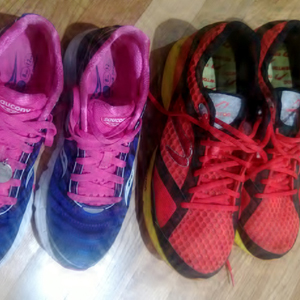 These shoes belong to me and my husband, Mike. 2013 was our first Boston Marathon. He started late due to long Porta Potty lines, finished 10 minutes before the explosions, and was collecting his gear bag. His next move would have been to come back to the finish to wait for me. I was at mile 25.8, one of the 5,700 who were stopped on the course. I had slowed down in the second half—overdressed, overheated. I didn’t know Mike was OK until hours later. The spectators and neighbors were so kind that day—loaning jackets, offering use of phones, offering tissues, and bringing trash bags out to those of us shivering from shock, exhaustion, and fear while we waited. I am extremely grateful for all the little things that day that led to our own timing being so lucky that day. And I’m also so sad for those whose timing was equally unlucky.

On my shoe is a charm that I got at Kathrine Switzer’s book signing at the expo. It says 261 FEARLESS. I drew energy, strength, and inspiration from that charm on that day. The range of emotions I experienced that day was huge. Until the terror unfolded, it was truly the most amazing race I’ve had the honor of running. The energy and support is unlike any other race—across the entire 26.2 miles. I desperately want to come back and run in 2014. Crossing that finish line would mean even more after this year’s race. Thanks so much to the BAA, volunteers, fans, first responders, and people of Boston for putting on such an amazing, class act event. There is truly nothing like it.