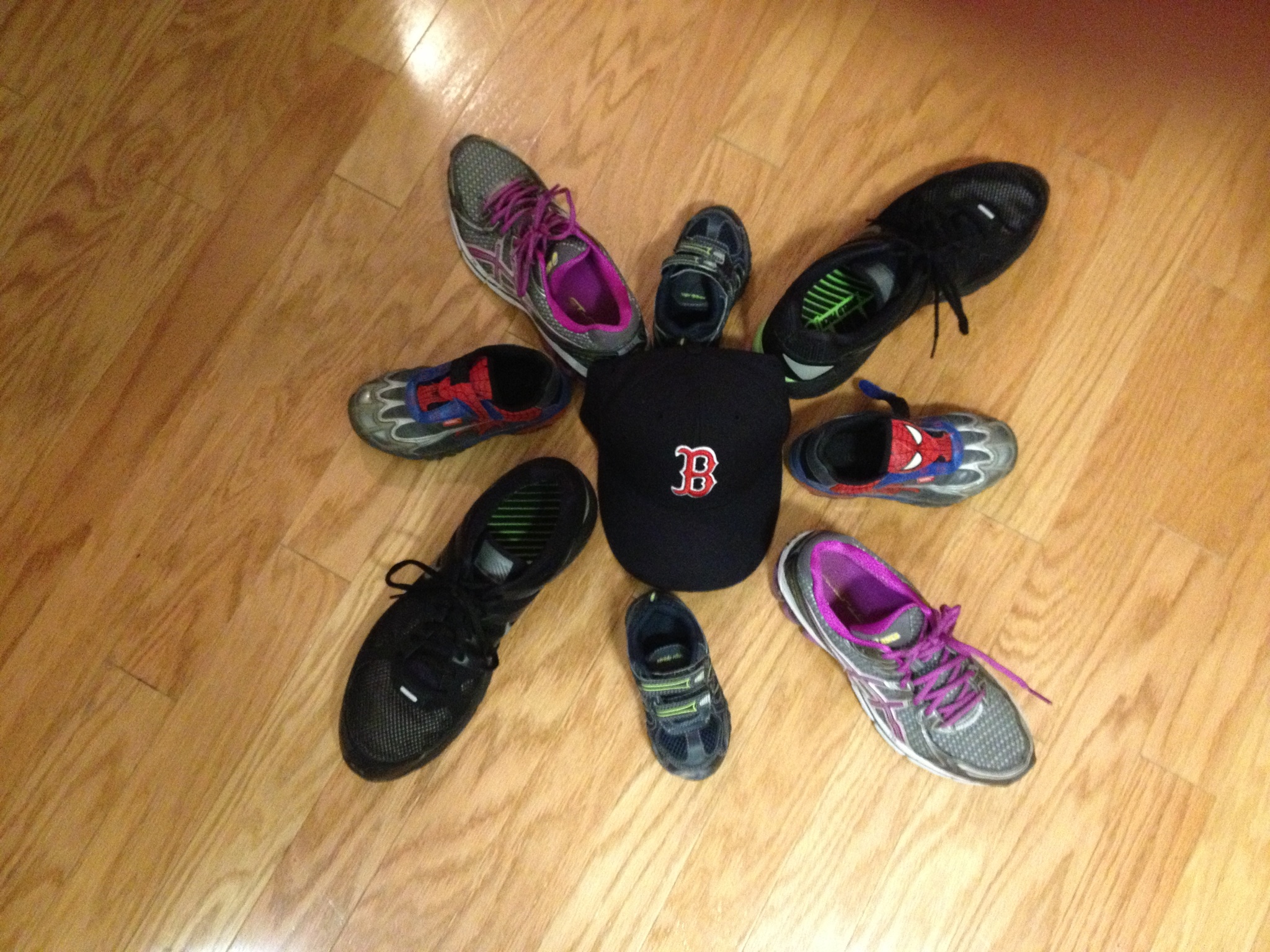 What a great day for the marathon. I woke up so excited … my first Boston marathon in almost 15 years. I grew up going to the Marathon with my Dad, who was an employee for the MBTA. It was my yearly ritual as a kid. It was always around my birthday, and it was such a treat to go work with my Dad every year and watch the Marathon.

Around 11:30 we ventured to the apartment building’s blanket on Beacon St.. Neighbors had marked our spot hours before the event started. As the long awaited sun shined on our faces, we sat their eagerly awaiting the gifted and speedy wheelchair racers. We screamed fervently as they whizzed by. About fifteen minutes after, we cheered once again. This time we cheered for some of the fastest women runners in the world—their bodies danced toward their last mile with such grace. Then the men … their speediness was amazing—their bodies were gliding down through the 60 degree air with confidence.

A few hours later the excitement began again. This time, I ventured down to mile 24 1/2 with my oldest son, Ryder. I explained to him that we would see our friends running, and most of the other Marathon runners. It was almost 2:15, and Beacon Street had even more passion to it … more runners … swarms of runners bouncing on the pavement. Swarms of cheerleaders on the sidelines (some more intoxicated then others). Many runners had their bodies painted with their names, or inspiration statements, such as “Today is my 50th,” or “Running for Mom.” I explained to my curious son that the Marathon is a major milestone, and some runners get dressed up, wear wigs, costumes and body paint! He was so thrilled to be there … he repeated over and over how he wanted to run next year. I explained that he had to be a bit older to run in the Marathon, even though he told me otherwise. Around 2:30, we saw some of our friends run by! Through my 36 year old eyes it was so exciting and inspirational to see friends, and even strangers run. Through my son’s 5 year old eyes, he was amazed and filled with energy and excitement of witnessing his first Marathon! He told me we would run the marathon together someday. Throughout the day my goal of running the marathon by age 40 was reconfirmed over and over again … it was especially then reconfirmed feeling the passion through the eyes of a 5-year-old.

Shortly after our friends ran by close to 2:50ish, we started to run back to our apartment. That is when the vibe on Beacon Street changed. People started clearing the streets. Chaos, uneasiness could have been smelled if it has a scent. We ran back to our apartment. As we opened our door, my husband said “My coworkers in NYC said there was an explosion at the finish line.” Shocked and confused, I ran over to our TV set with a feeling of queasiness. I didn’t even stop to think that my son’s innocent 5 year old eyes would see a happy, motivating, exciting event turn into mass chaos and a national tragedy. After seeing the explosion and hearing the news anchors make graphic assumptions about the injured bodies, I shut the TV off. I briefly explained to my son that something had happened … I tried to change the subject, but he knew … he knew that the happy, exciting, innocent event had been disrupted …

Days later, on April 19th, he also knew (without me telling him) that something was going on when we couldn’t go outside on the first sunny 70 degree day in Boston. He knew that in his world, temporarily something had changed …

That week, the week of uneasiness, of surreal-ness, the week of thinking “did this really happen?” was like walking in a fog. Not only at home, but also at work, the expression on youths’ faces was missing innocence. At Boston University, the students were personally affected … these students are still so young in the realm of life. Many of them remember 911, but only as a young child, and may have been sheltered from the media. This was not the case now, here, in Boston, in 2013, as young adults.

If I learned anything from this experience, that this is the year that Bostonians come together. I hope my son learned that, I hope my students learned that. I hope the world learned that. I end this reflection with some prose I wrote shortly after the Marathon. Whether you were originally a Bostonian or not, everyone is now …

“There is something strongly distinct about being a Bostonian. Bostonians never give up. Maybe it is from dealing with the unpredictable weather, the dirty water, or the Cape traffic. Or it could be from the never-ending loyalty to our Sox, and our passion for our Pats, Celtics, & Bruins. We fight. We struggle. We eventually WIN. We are Patriots. We are Bostonians!”