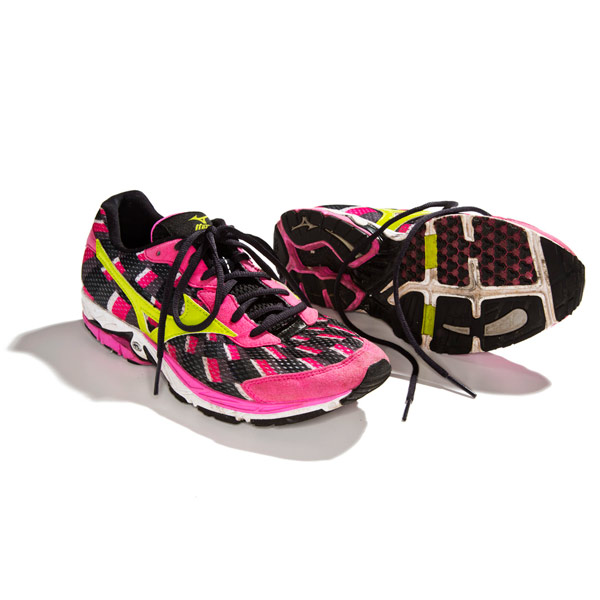 This was my first Boston marathon. My third time qualifying. I registered for 2011. But this time was the first time it worked out for me to go. It was a bucket list race for me.

I don’t usually travel for marathons. To go out of town for one was a big deal. We made it a girls’ trip. I was with two of my best friends. We’re all from Jacksonville, Fla.

We each ran at our own pace. I finished in 3 hours and 41 minutes. I was about halfway through the finish chute when my lower body started cramping up. I kept having to stop and bend over and stretch. One of the medical guys saw me and said, “Are you okay? You might need some fluids.” They tried to pull a wheelchair over. And I said, “No, no, I’m fine. I’ll go to the medical tent but I don’t need that wheelchair.”

At medical, they said, “You’re just cramped. You need to walk. Go back to the John Hancock massage station.” So I started back that way, back toward the finish. The wind was whipping. It was cold. I had my phone with me. I don’t know… it was so crowded in that chute. I just wanted to get out of there. I wasn’t in the mood to be in a big crowd with so many people around. I thought, I’ve got to get to a clear open spot where I can warm up and find my friends.

I didn’t know where they were on the course. I passed one of them [Catherine] during the race. So I knew she would finish behind me. The other one [Beth] came down with a stomach bug the night before. I didn’t know if she would even be able to finish.

I guess I stood there too long, because I started shaking, convulsing. Another med came over and said, “You need to warm up. You’re blue.” He took me to the back medical tent, near the family and bag/gear check area. I lay down. They gave me blankets. They were amazing. I remember thinking, This place is a well-oiled machine. There were so many people who knew exactly what to do. They were bringing me soup, covering me up. They got me into dry clothes. I couldn’t believe they were taking such good care of me. There wasn’t really anything all that wrong, just this hypothermic cold.

As I was laying there, I said, “I feel like the tent’s moving. I feel like I’m on a boat, like the ground is moving.” And they said, “You’re just disoriented.” And then another medical person came up and whispered in the ear of the woman who was helping me. It was one of those things. I could tell something was going on. Something wasn’t quite right but I wasn’t sure what it was. They both took out their phones.

At that point, I was better, and I felt that I was taking a bed that might be needed. So I said, “As long as somebody can point me in the direction of my hotel, I’ll be okay.” Someone escorted me out. I tried to get onto a train. A man stopped me at the entrance and told me, there were just two bombs at the finish line. “You don’t want to be underground.”

I saw a girl walking toward the tent. Her body was sort of crumpled up. It looked like she was in shock. She was sobbing but not crying, just shaking. And she had her hands up to her face. “I saw everything,” she said. “I saw everything.” I asked, “Are you all right? You’re covered in blood.” She said, “It’s not my blood.”

I knew I had to get out of there. I was scared. I didn’t know how to get back to my hotel. We were staying at the Commonwealth, pretty far from the finish.

My husband had sent me a text message. “Congratulations! Relish in the moment.” He was tracking me on the course. I called him. I was able to reach him. “They said there were two bombs. I’m okay, but I can’t find my way out.”

He told me to hang up the phone and call my friend Emma. She had made her reservations way before us so she was able to stay nearby. I called her. She explained where she was, the Marriott Copley. I told her what street I was on. I think I was just aimlessly wandering at that point, not knowing where I was, or where to go, just knowing a general direction, but not really. It was the same for a lot of people from out of town.

As soon as I got to the Marriott, we were on lockdown. They closed all the restaurants. We stayed in Emma’s room, watching the news. At some point, my cell phone died. I called my husband from the room. I called my friends at our hotel, to make sure they were okay. I was able to shower but I didn’t have anything else to wear so I put my dirty running shorts and shoes back on. They were really sweaty. And I put on the clean shirt they had given me at the med tent. I wrapped a towel around myself and started back to my hotel.

A police officer told me there were no trains running, my best bet was to walk. So many streets were closed, you couldn’t use Google maps. I was approached by a really nice man. He said, “I’ve got six runners in my apartment who were evacuated from their hotel. I’m out here trying to find something for them to eat. I’ll walk with you and show you where to go.” I honestly don’t know if I would have gotten back as quickly as I did, or without breaking down, without his help. He told me his name but I don’t remember it. I wish I did.

It was about 8:30 in the evening when I got back to my room and into fresh clothes. The girls I was rooming with had found an open McDonald’s, so they had cheeseburgers and salads waiting.

How I didn’t hear the bombs, I still don’t understand. Now that I’ve seen the news, comparing it to how I experienced it… It was very different. Where I was, it was very calm, quiet, surreal. On the street, people were standing around, not knowing where to go or what to do. Some were pressed up against windows, to watch TVs. There wasn’t a lot talking, just the sirens.

Later, all these what ifs go through your head. When I saw the story about the young boy…. my oldest son is seven. We could have made this a family trip. My friend who had gotten sick, she was at mile 25.5 when they pulled her off the course and told her what had happened. What if she hadn’t had to stop so many times? You replay all these moments. But I feel like my part in the story is so insignificant. It was just shock and exhaustion and then disbelief.

We had chartered a bus, a group of us, for the starting line, so that when we arrived we could stay on the bus and keep warm. There were 42 of us, all Jacksonville people. Thankfully, no one was affected. Everyone was safe.

Everybody keeps asking, will you go back? I would do again tomorrow. I will requalify. I understand now why it’s such a coveted marathon, not just because of qualifying times. It’s special because it truly is special. The course is spectacular. I think if I ran with my hand out the whole way, I could have slapped people’s hands for the entire race. It was that cool. Such an amazing experience.

I’ve never been to Boston before. It’s a beautiful city. We weren’t supposed to leave until Tuesday night. I had been looking forward to spending the day there. But after… we just wanted to go home. I called Jet Blue from my friend Emma’s hotel, because we heard they were switching flights for free. At the airport, if you had your bib or your medal out, they let you go right through the first class security line. And they gave us free movies so we didn’t have to watch the news on the plane.

Getting off in Jacksonville, in our Boston jackets and gear, that was maybe the hardest part. Everybody was a little emotional. I don’t know, when we were still there, together, we were part of it. We didn’t feel protected anymore. Partly, it was being scared of questions and having to relive it, and also just being sad. There were news cameras and reporters waiting, so that was a little overwhelming. Nobody wants to appear as the face of the tragedy. We would rather just be thankful to be home and safe, and pray for the families.

My oldest son was home sick this week. He’s seen the footage of the blast replaying on TV but none of the graphic pictures. I was able to come straight home and give him a big hug. He keeps asking, “Why were you in the medical tent?” “I was cold!” I tell him. My three year old, to be honest, I’m not even sure he knew I was gone. I went to pick him up at preschool that day and he said, “I don’t want to leave.” And the baby is only 7 months.

My friend Catherine texted me this morning: “I miss my Boston sisters!” I feel like we have this bond now. She came over and brought me coffee. We’ve decided we’ll try to go as many years as we can, if we all qualify. I don’t want this to change the city or the marathon.