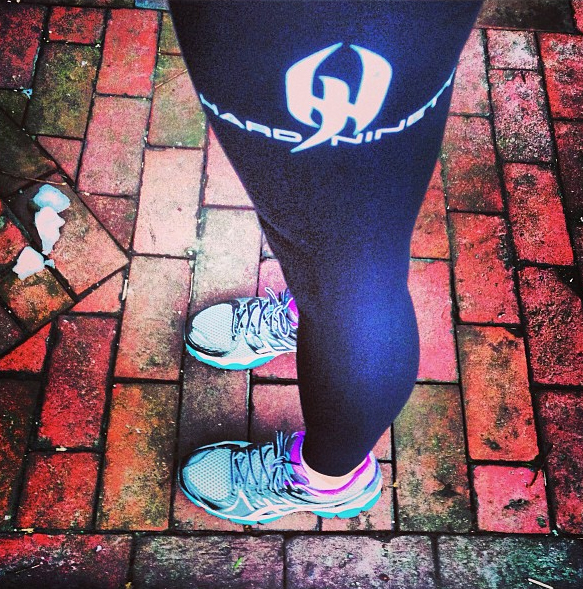 I’ve been living in Boston for two years now, and last year I watched from a television screen; smiling and cheering as the runners left Hopkinton and headed 26.2 miles to Boston. I remember the feeling of joy and pride I had to be an American and living in a city like Boston. I conjured up a bucket list and on that bucket list stated, “RUN BOSTON!”

When I got accepted to run with DFMC, I knew there was a fundraising responsibility. The nonprofit I was about to run for is a creditable one with a rich history in cancer research, so I knew I wouldn’t have to worry when it came to fundraising. The toughest task was the training. I am NOT a long distance runner. The most I ran before Boston was 3.1 miles. No more and often a lot less.

My friend and I set out to train for our Boston Marathon on November 10. We would run Mondays, Tuesdays, Thursdays, and Saturdays. I followed a “Beginners schedule to a Marathon” that I had found on Pinterest. After Christmas, my friend surprised me with my own entry to the Boston Marathon because he had a friend that had two numbers to give. I was overjoyed! I called DFMC to let them know of the good news and they let me know that since I had my own number now, I didn’t have to run with DFMC anymore since I could secure my spot and entry into Boston. I reassured her that there was no way I was going to drop out or quit DFMC. DFMC believed in me and gave me the chance to even consider running and training for April 15, 2013. Even with my own entry, I wanted to be a part of DFMC and help fundraise for cancer research because cancer is something that has affected many of the people I love.

December came and went. Snow was finally here because last year there was no snow in sight during the winter season. January came and went. In February I started to communicate more with my DFMC teammates that lived near Boston. I started to go to the DFMC long team runs that took place on Saturdays. My DFMC teammate, Hilary Hall (a 17-year cancer survivor and mother of three!), lived within a mile of me and offered to give me rides every Saturday to the team runs. It was at the team runs that I learned about my teammates and their passion behind why they run. It still brings tears to my eyes when I think about my awesome teammates and their story with cancer and training for the marathon. To them, running a marathon isn’t just about crossing that finish line; it’s about spreading the word about cancer. It’s about being strong because there are some that have less than them but fight everyday. It’s about a journey to ending cancer. Every step we took, was a step closer to a world without cancer.

My DFMC teammates pushed me to go faster, pushed me to run with passion, pushed me to never give up when my head was telling me I had to stop after 9 miles even though it was a 18-mile training run that day. In mid March, a snowstorm hit New England and our Saturday group run was cancelled but that didn’t stop my team. More than 42 people from my team had gathered via Facebook message to plan a run to make-up for the one cancelled. We met at the Target in Watertown and ran our planned 16 miles. Even a snowstorm couldn’t stop us, so I knew come April 15, nothing could stop us.

On April 15, I left my apartment at 5 a.m. and headed to Hilary’s house (again, she offered her assistance and I could never express how thankful I am to her for everything she has done for me), from there we went to our DFMC meeting spot. As a group, we walked together to the buses that would take us to Hopkinton. When we got to Hopkinton, we walked to a nearby church where the DFMC team gathered and got ready for the marathon. I had three bagels with peanut butter that morning. I WAS READY.

When the time came, our wave walked out to the starting line. Everything was in place and everything was perfect. And then off we went, but not too fast Because our team trainer, Jack Fultz, told us the first 17 miles was only a warm-up. So we took our time and regardless of what I wanted to do, my body wasn’t going to allow it. At my last long run before tapering, I had injuries my right hip, left knee, and left foot. I went from running a 9:50 mile to an 11-12 minute mile. As I approached the 5K mark, the pain was starting to kick in, and I have to be honest, at one point, I wanted to give up because I knew injuring myself was not worth it and I had the rest of my life to run Boston again. But did I give up? Did the patients at DFCI give up when chemotherapy for rough? NO! I ran. And ran. And ran. I looked to my DFMC teammates for support. When the pain got intense, my DFMC teammates would walk and talk with me. They didn’t care about beating Oprah’s marathon time. They cared about me and finishing as a team. I owe many thanks to Hillary Chu for constantly talking and stopping with me when I needed it.

So here I was, approaching the fire station and Heartbreak Hill and out of nowhere my friend, Cyndi Rufo, runs out and runs the next three miles with me. This little lady dressed in a pink top and running shorts made a sign that said, “NELLY” and she held up that sign the whole time as we ran. She held my hand and told me what a great thing I was doing. I fought back tears of joy because she took time out of her day for me. I still fight back tears today because she was the one that wouldn’t leave my side until I found my boyfriend in the crowds when the bomb went off at the finish line. As we were approaching mile 22, she received a call from her husband telling her about the explosion on Boylston. He didn’t give us details about it and Cyndi and I assumed it was something small. Nonetheless, we were a little worried. I was approaching mile 23 when I spotted my boyfriend running toward me. I embraced him when I saw him and felt all the sadness and pain diminish when he looked at me and smiled. Cyndi and I said our goodbyes and she hugged me and told me to continue on with my run and to cross that finish line.

Dan, my boyfriend, gave me a kiss and we were off. He wanted to finish the last leg of the race with me and I knew my friend Jill Ortolano was going to be waiting at mile 26 to run the last .2 miles with me as well. Dan and I took our sweet time because my legs were starting to cramp up and the weather was starting to drop. I carried my phone with me during the marathon because I wanted to track it. After crossing the 24-mile mark, my phone started to vibrate a lot, meeting I was either getting calls or messages. Little did I know that my friends and family were calling and texting to make sure I was OK.

I could see mile 25. I was within reach … And I will forget the crazy amount of cop cars driving by and the B.A.A volunteer that stopped us and told us we could not proceed because there was a bombing at the Boston marathon finish line. My heart sank because I knew there were thousands of people at the finish line watching and I knew that there was going to be hundreds of children there cheering. I started to cry. My legs gave out. My heart stopped. I started to shiver as the cold breeze started setting in. Dan had gone to get ma a reflector blanket to keep warm. He took off his sweater and put it over me as we were instructed to walk back toward mile 24.

After that, I can’t really explain what happened because everything so chaotic. We found shelter at a church. I was finally able to get some warmth in my fingers to check my phone. I had 78 missed calls, 149 text messages, over 212 Facebook posts and messages and too many Instagram comments to even count … All asking me if was OK and safe. Safe? OK? That’s when I remember the finish line had been bombed … Twice. In a state of shock, I couldn’t put together the pieces of the events. I sat at the church with Dan in shock. Dan, being the superman that he is, got in contact with Jill to make sure she was safe and not at the finish line. Thankfully, I was running too slow and she hasn’t left her house yet when it all happened. My phone died a little after 3 p.m. that day and Dan soon found out his calling service didn’t work.

We sat in the church as B.A.A volunteers offered us food and water. Some boys from Arlington University came by and offered their working phones, apartments, showers, charger, and money to us. Many, many, many thanks to everyone that helped us that day. We sat and waited in the church for about 2 or 3 hours. We then took a charter bus to the Common because I had to get my marathon bag. I had taken my wallet, my house keys and Dan’s credit card that day. When we got to the Common, we sat inside a public bus for warmth as they tried to locate where the marathon bags would be. Once we picked up my bag, we got a taxi and headed home.

On the taxi ride back, I looked outside my window and the great city of Boston and told myself, “RUN BOSTON!” I started to cry again because the taxi driver had the news playing on the radio and hearing the number of people hurt broke my heart. Dan hugged me and told me everything was going to be OK and I knew he was right but I couldn’t help but tell him how much I hated the person that did this and how evil he or she was for ruining such a beautiful day for everyone.

When we finally got home, I told Dan, “I’m not mad. I’m not angry anymore. I don’t want to hold hate and fear in my heart. I want to run again next year with DFMC and cross that finish line with a smile on my face.” Dan hugged me and said, ” You and probably 100,000 other people!”

He’s right. Next year, we will come back stronger and better.