Effects of Treatment for Malignant Brain Tumors: a Double-Edged Sword 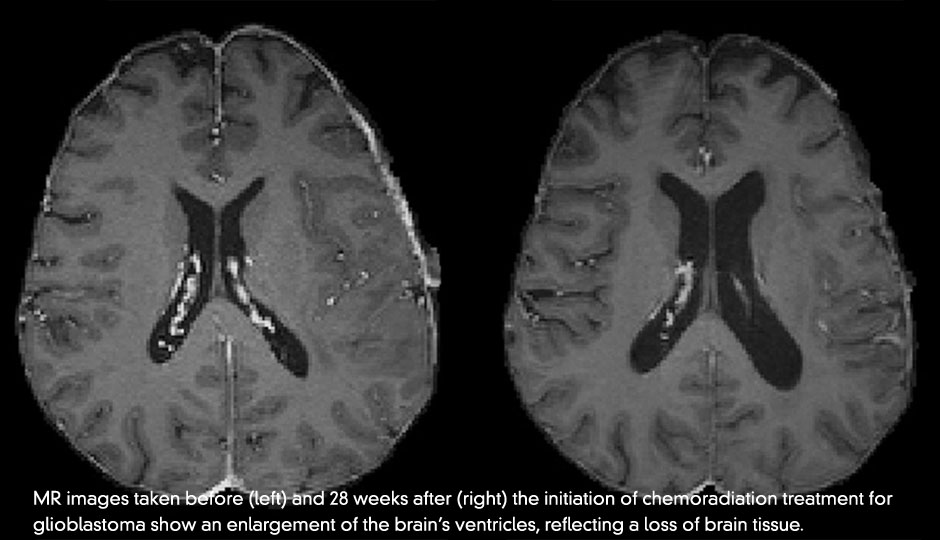 Glioblastomas (Grade IV astrocytoma) are malignant, rapidly progressive brain tumors that are particularly challenging to treat. It is this tumor that killed Senator Edward M. Kennedy of Massachusetts. They are biologically aggressive tumors and have the following features making them uniquely difficult to treat:

Surgical removal of the tumor (excision or resection) is the preferable first line of treatment, but is not always possible due to the size and/or location of the malignancy within the brain. Preserving neurological function is to be balanced with the extent of surgery. Because these tumors grow rapidly, chemotherapy and radiation therapy are often given in conjunction in hopes of having the best possible arsenal against the cancer.

Improved anticancer therapies have increased the survival rate of patients with glioblastoma, so that long-term effects of chemotherapy and radiation can impact quality of life in surviving patients. Though physicians aim to treat as little healthy tissue as possible, exposure of normal brain to the toxic effects of therapy is currently unavoidable. A recent study from the Massachusetts General Hospital Cancer Center examined the effects of combined radiation and chemotherapy over time on the healthy brain tissue of patients with treated for glioblastoma.

This study was led by Jorg Dietrich, M.D., Ph.D., of the Pappas Center for Neuro­Oncology at the Mass General Cancer Center. The results appeared in the August 25 issue of Neurology. The authors rigorously followed 14 patients over the course of 35-weeks of treatment with serial Magnetic Resonance Imaging (MRI) scans of their brains. All patients received the current standard of for glioblastoma – combined brain radiation and chemotherapy with temozolomide. The investigators focused their investigation on structural changes within the normal brain over time.